The Italian Consul General, his wife, and their China adventures

When I saw the photo the Beltrames took on their wedding day, I asked them if they could hold it while I took a new one. They agreed immediately and showed the love they still have for each other on their glowing faces.

There is a theory that after a couple have been married and lived together for a long time, they will become more and more alike. That certainly seems to apply for the Beltrames.

I was invited to do the interview at the villa where they live in Shanghai. The Western-style living room was decorated with many Chinese characteristics, including Chinese style wooden chairs, suspended photos showing old towns with Chinese red lanterns, and rows and rows of Chinese vases.

Mrs. Beltrame proudly said: “Oh, I took these photos when we travelled around China’s old towns!"

“And these vases were all bought by my wife,” said Mr. Beltrame with a loving expression. “She loves collecting vases, but… it will be a tough job to bring them all back to Italy."

At the same time, they also kept some Western corners in their villa, such as a corner of different wines from all over the world, and a corner will photos capturing their family’s important moments. That's where I found the photo of their wedding day.

On the interview day, Mr. Beltrame wore a formal suit with a red tie while the well made-up Mrs. Beltrame dressed in orange formal material, wearing a pearl necklace and earrings. We smiled and started the quite formal interview in a rather casual atmosphere.

Holin: Do you remember the moment you first came to Shanghai?

Stefano: We have a tradition of taking the new consular officials to a specific Italian restaurant. It was a very famous place so I remember the first night they took me to have an Italian dinner at this Italian restaurant in Shanghai.

Nicoletta: I came three months later. Because I was waiting in Italy until the end of school for my children, so I came later. It was easier for me because he was already settled.

Holin: Would you please share with me the reason you came to Shanghai?

Stefano: When I knew my predecessor in Shanghai was leaving, I started right away to apply because I wanted to come to Shanghai. Shanghai is a fast growing city. It's the new center of the world. I was in Italy and I came very fast. 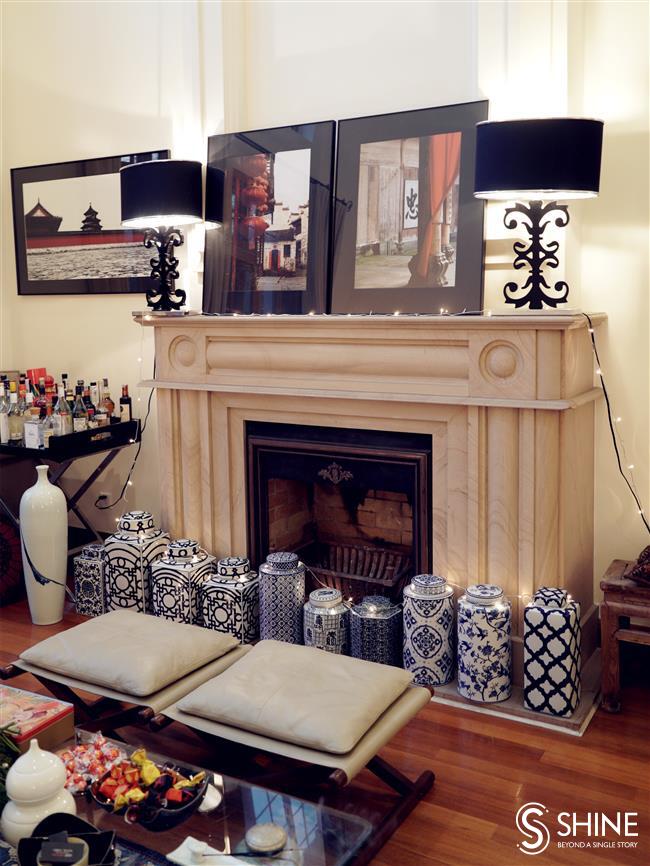 The Western-style living room is decorated with many Chinese characteristics.

Holin: Before Shanghai, you must have had many postings, right?

Stefano: We have been to a lot of places now including the United States, like Washington, Berlin in Germany, Iran, Kuwait and others.

Holin: So why did you choose Shanghai as opposed to other Chinese cities like Beijing or Shenzhen?

Stefano: Shanghai is the place I like most in China. I have been to Beijing, Nanjing, Yangzhou and many other places, but I am attracted by Shanghai. It's kinda like New York City in the United States. The energy of the city... you want to know more about the city. Beijing is bigger, so it's more difficult to get around. And of course we are foreigners. Shanghai is more open.

Holin: Have you noticed some differences over the past three years?

Stefano: China is not easy for a foreigner to understand. I saw unbelievably fast changes. When we came, the Shanghai Tower was only half built. Now it's complete!

Nicoletta: Shanghai is improving a lot. Every day is changing. I see more and more blue sky. That's nice. The energy of the city is amazing.

Stefano: Shanghai is much more than we expected. It's so energetic, so fast and moving. My expectation was it's like New York, but this is different from New York, much better than what I expected. A foreigner can very easily live here. It's very safe. The pollution is less than I thought. Beijing is worse than here.

Holin: Do you have any impressive stories related with Shanghai?

Stefano: There is one thing I am very proud of. There is a guy we consider to be the first Italian in Shanghai. He is a Chinese scholar named Xu Guangqi. He learnt to speak Italian 400 years ago. When you go to his place in Xuhui, you can see it's an amazing place. It's both Western and Eastern. It's very Chinese but there are a lot of Western elements. He was a good friend of Matteo Ricci. (Matteo Ricci was an Italian Jesuit priest and one of the founding figures of the Jesuit China missions.) It's very interesting to see the way they tried to understand each others' cultures. It's a good example for the future.

Nicoletta: When I first came here, there were many shikumen (stone-gate houses) still there. Behind Xintiandi, there are many, many “li long (lanes and alleys)” there. I went there with an expat group, and it was the moment they asked people to go away and to destroy the house to make a new building. When we went inside the house, the old people made me feel very welcome and happy.

And often, in one place there is everything related to just one thing. For example, on Fuzhou Road, everything is related to schools and books. I am very impressed by this kind of place. 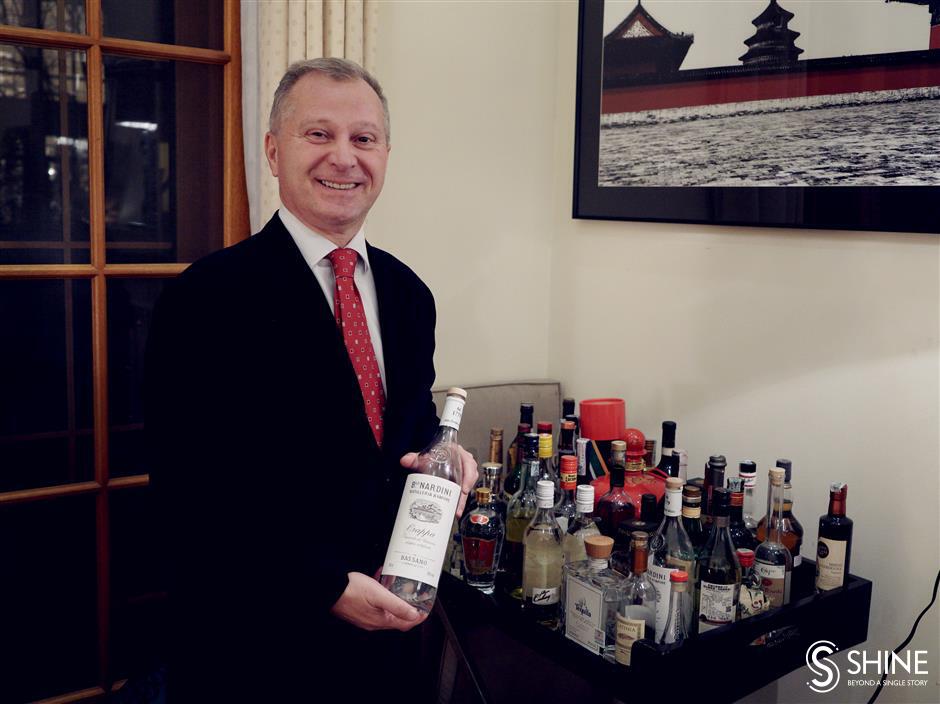 Stefano holds a bottle of wine in their corner of wines. He invited us to try some Italian wine after the interview.

Holin: How do you spend your leisure time?

Stefano: I go jogging. This year I took part in the Shanghai Marathon which is only 10 kilometers. I trained a lot on the weekends to make sure I got to the end.

We try to see more and more Chinese cities now. Before we leave, we will try our best to travel around China and to speak more Chinese.

Holin: Which place in Shanghai do you like best? Why?

Stefano: Of course, the Xu Guangqi memorial. I also like Julu Road. There are a lot of little restaurants where you can go and meet friends. I also like to walk around the Bund.

Stefano: Julu Road, Nanjing Road W. and the Exhibition Center. There are a lot of places that make me feel at home.

Nicoletta: I like Taikang Road and Tianzifang. It's very lively. It's very special. You can buy a lot of small things and people are so kind.

The Beltrames hold the photo which was taken on their wedding day 23 years ago.

Holin: Which element do you love about Shanghai?

Nicoletta: I like the city because it's very different. You can change and promote China to modern China. This is very interesting. The younger generation is very nice. They are very curious about expats and they ask us lots of questions. I like the energy.

Stefano: There is something I really like which is safety. It's a very important issue. In Shanghai, you don't worry about your safety.

Holin: Are there any shortages in Shanghai? Any suggestions to change it or make it better?

Nicoletta: And the pollution can be improved. 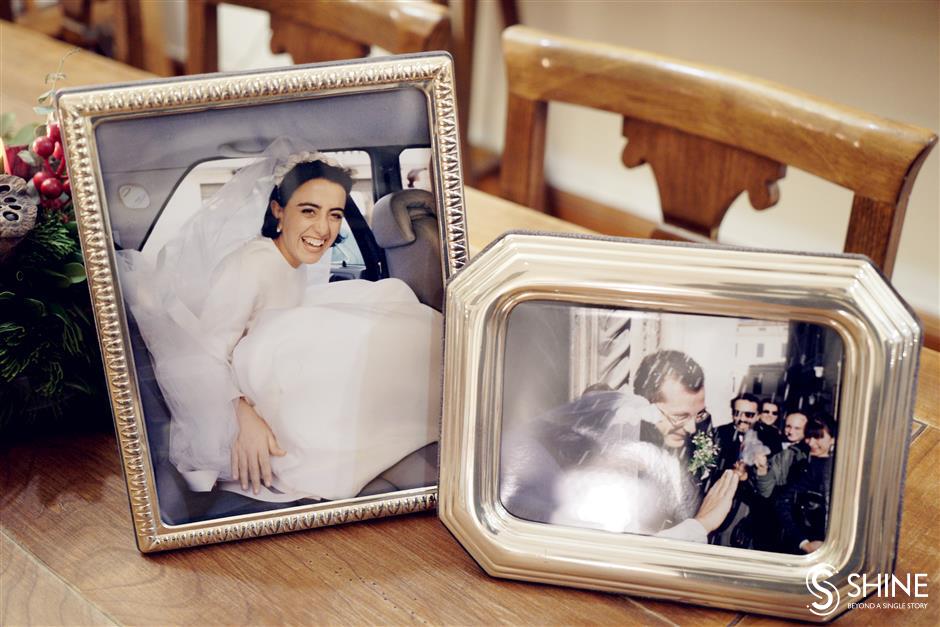 Two photos taken on their wedding day 23 years ago take pride of place in the Beltrames' living room.

Holin: You must have many impressive memories during your life, share one or two?

Stefano: We have a lot of good memories. In Shanghai, we were very proud when the Italian President went to visit the tomb of Xu Guangqi. It was an official visit.

Another thing is quite different. It's the Shanghai Marathon.

And we've had a very long life, so we've met a lot of leaders and heads of states. We have a lot of memories.

Nicoletta: Today is our wedding anniversary. We got married 23 years ago. The three girls we have were born in three different countries. One daughter was born in Italy, one was born in Kuwait, and one in Germany.

We will leave in the summer of 2018. There are some places we want to go. We have a list.

What do the Beltrames want to say to themselves in the future? Have a look! Stefano and Nicoletta are sending a message to themselves 10 years from now!