Boxing, books and a 'Brawl on the Bund'

English teacher and boxing enthusiast Badhrul Islam is flicking through Foydor Dostoyevsky’s “Demons” in the afternoon sunshine at Wellington College Shanghai. In a few hours’ time the mercury will rise even further as he puts himself through more “Crime and Punishment” with his second passion after literature — boxing.

The 39-year-old combines his daytime job as an English literature teacher at Wellington College with time at the Golden Gloves gym as a boxing coach on Wuding Road, Jing’an District.

Islam became a part-owner of the gym in 2016. At first it was purely a club for foreigners but many locals have since joined. And next Friday sees the culmination of two years’ hard work when the Golden Gloves gym steps into the ring for the Brawl on the Bund. 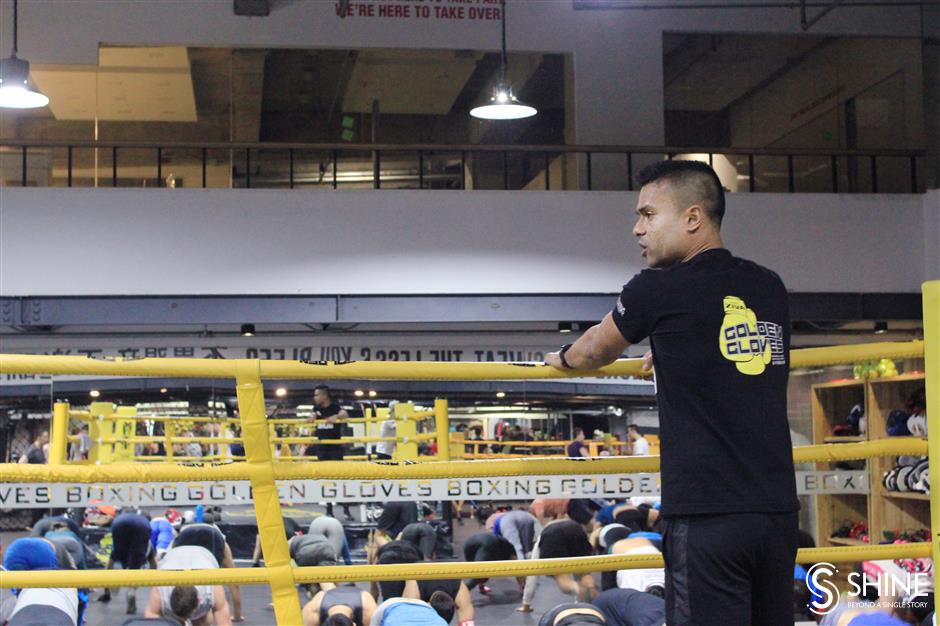 Islam watches trainees hard at it in his Golden Gloves gym in Jing'an District.

The biannual event is a white-collar boxing competition where fighters from all walks of (white-collar) life train to get into shape and slug it out at a black tie event.

The British-born teacher, who cites Joseph Conrad’s novel “Heart of Darkness” as his favorite, has spent 14 years in Shanghai and still remembers his first visit to the metropolis 17 years ago. He says the city wasn’t as glamorous as it is today, but it was still impressive, nonetheless. For Islam, Shanghai has evolved into a city of gastronomy.

“The most noticeable thing for me is the number of good restaurants around,” he said. “Shanghai is such a great place to eat. You get Spanish food cooked by Spanish people, you get Italian food cooked by Italians and food from lots of different countries.”

Islam says he is comfortable combining his two different roles of literature teacher and boxing coach but doesn’t want either one to define him.

“It’s like the two sides of a coin. Both are passions. A single side can’t represent me,” he said. 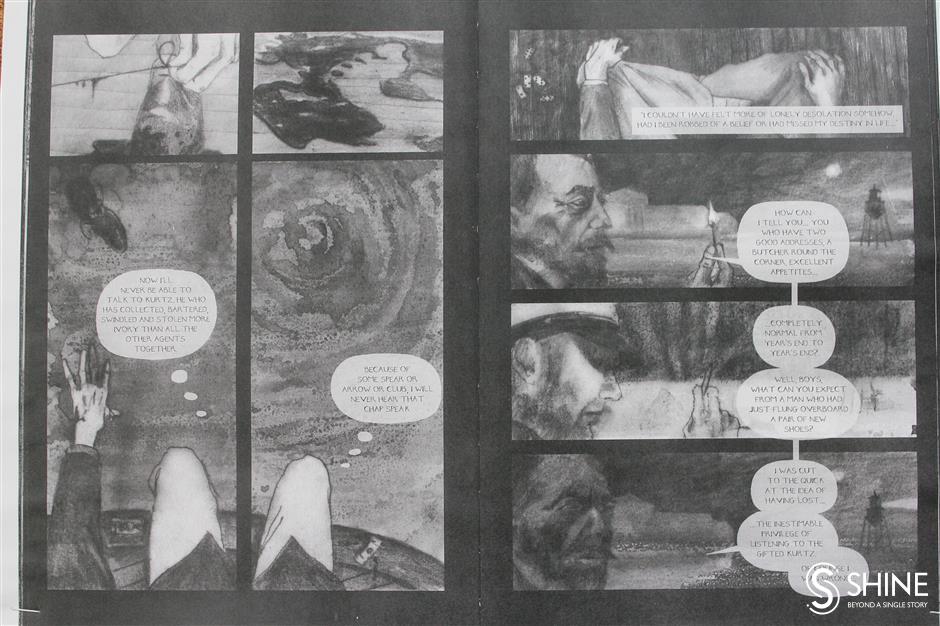 Islam has decorated his classroom with pictures from a graphic version of "Heart of Darkness."

Q: Why did you pick Shanghai as a place to work?

A: Actually, I’ve a good friend who is still here called Karl. He said it was quite a fun city, a good place to work and arranged a job interview for me. Why I came here was pretty much down to him.

Q: Share with us your first impression of Shanghai.

A: It was in June 2002. My best friend and I came to Shanghai and stayed for three years. Then I went back to Britain for a while and returned in 2008.

It was very different to how it is now. I remember being pretty confused in 2002, and it was also very hot when we arrived. We didn’t speak much Chinese and I remember getting lost. But my first impressions are still pretty vivid. The size of the place was very impressive.

Q: Shanghai is a pretty lively city, so how do you spend your weekends?

A: It’s a real mix. Friday night, I generally like to have a drink and relax, because I never drink during the week. On Saturday, I might be coaching. We’ve just started training fighters for the Brawl on the Bund, which is a quite well-known boxing event. This Saturday, I will be coaching there. And Sunday night is often spent in a bar or club. This week, for example, it’s a friend’s birthday, so I will be out with him.

Q: Tell us about the teaching side of your life.

A: I teach literature. Actually my degree is in literature so I am very passionate about books. My day job allows me to work with what I really like, literature, novels, poetry.

Lots of my friends work in the business world and their jobs are wrapped up in meetings, computers and office work, while mine is working with young people and literature. It’s refreshing to be able to do this job in Shanghai. 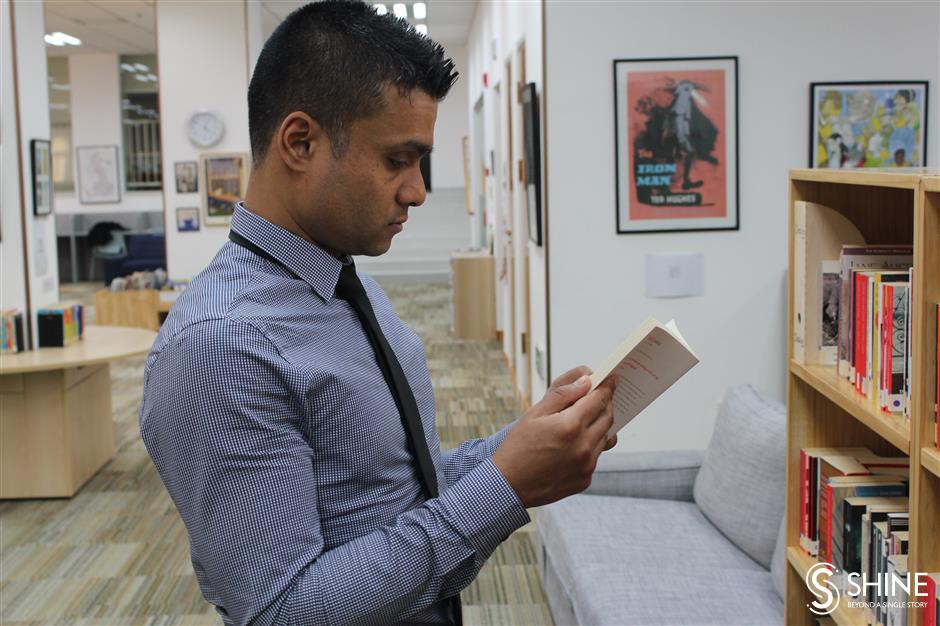 Islam looks through a Polish novel in Wellington College library.

Q: How long have you been a boxing lover? Why did you choose to be a boxing coach?

A: I am from England where boxing is a very popular sport. I’ve been watching boxing all my life and taking part in the sport for around 11 years before I came here. In Shanghai, I have been involved for quite a long time, maybe almost 10 years. We started the Golden Gloves gym on Xinzha Road but recently moved it to Wuding Road.

Boxing is becoming more and more popular. When we started Golden Gloves, it was the first big foreign gym, but now it is a real community for boxing now. At the same time, a lot of our members are local Chinese people who are interested in fitness. They get more and more addicted and become boxing lovers.

Q: Which street do you like best? And why?

A: Wuding Road is really good for foreigners. It’s quite well-known. It’s near Changping Road. So we can get all different kinds of food, and it’s really convenient for my gym, which is only a minute’s walk away and a very important part of my life.

Q: Compared to your hometown, what do you dislike about Shanghai? Do you have some suggestions to change it for the better?

A: I think that Shanghai like many big cities can be a little bit unfriendly. Well, individual people are always friendly. But generally, in my hometown, if you bump into someone, you turn around and you apologize or you hold the door open for someone. But this is not just Shanghai to be fair.

In places like New York or London you also find that “big-city attitude.”

Q: What changes have you noticed since you came to Shanghai?

A: Well, one of the big changes of course that everyone notices is the buildings going up, and the Metro. These are important, right?

When I first got here, there was only Line 1 and 2, but now the Metro is everywhere, which is brilliant.

The buildings are also very noticeable and in English, what we called “gentrification.”

When I first came to Wuding Road, it was pretty local. Now it’s pretty nice and modern.

The most noticeable thing for me or the best thing for me is the number of good restaurants around here. Shanghai is such a great place to eat.