Scrap of paper leads to forever courtship with 'Miss Stamp' 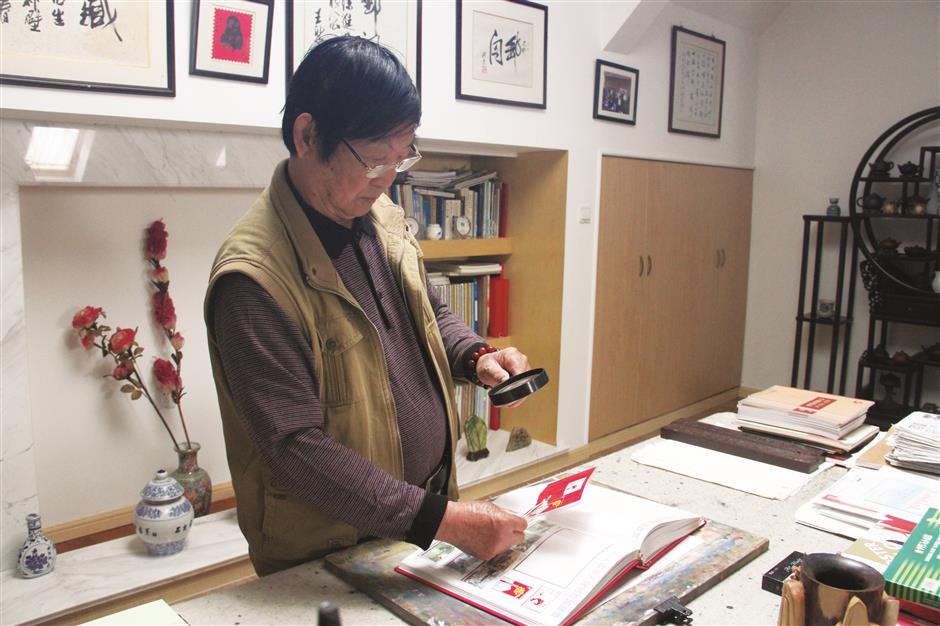 Xu Jin checks a stamp at his home in Anting Town, Jiading District. A retired teacher, Xu has adopted the hobby of stamp collecting for nearly 60 years.

It all begins with a letter the gentleman received more than 60 years ago. In 1957, Xu Jin, then a teenager of 14, received his first letter from a former classmate then in military service. He was immediately attracted by the little colored scrap of paper at the upper right corner of the envelope.

Over the next 60 years, Xu pursues his hobby of stamp collecting. Just a glimpse of his collection will put him in a state of bliss. “I am in a forever courtship with ‘Miss Stamp’,” said Xu, founder of the Anting Non-government Collection Association, Jiading’s first township non-government collection organization.

Since his fascination with that first stamp, Xu’s daily obsession is to collect more stamps. The reception room at his school was where letters arrived, so he volunteered to distribute letters for his classmates and teachers. When they expressed their gratitude to him while receiving their letters, he would reply politely: “My pleasure. If you are not collecting stamps, may I have the stamp on your letter?”

“At that age, I was too young to realize that I was heading to become a stamp collector. I only cut the stamps down from the envelopes and put them inside my diary. Occasionally I would take it out and looked at the ‘dazzling world’ on the stamps,” Xu recalled. “I hadn’t been to places far away from Shanghai at that time, but stamps offered me a chance to see scenery elsewhere in my country.”

After Xu enrolled into Anting Normal School, his stamp collection also advanced. To become a proper stamp collector, he bought stamp albums, tweezers, magnifiers and other tools, and learned everything he could about the hobby.

Sometimes it tested his patience. He would soak a stamp and its envelope in clean water, let the stamp drop off on its own, dry it between old newspaper and finally put it into his stamp albums under a protective film.

As a student with little pocket money, Xu also came up with a good idea of collecting stamps at less cost.

“At that time letter exchanges between friends had already become very common. I would put my extra and repeated stamps into the envelopes, let my friends use them and ask them to mail me some new stamps,” said Xu.

Xu graduated from Anting Normal School in 1963 and went on to become a teacher in Shanghai’s Songjiang District. Having an income, he became more ambitious and wanted to collect all the stamps that had been issued after the founding of the People’s Republic of China. He bought new stamps while collecting past stamps he lacked.

But for Xu, buying new stamps is far less fulfilling than collecting old stamps. “Only the stamps I collected have the rewarding ‘postal aroma’,” he said.

Through collecting stamps, Xu also made quite a few friends across the country.

“Some of them I have never met. With some, I felt like old friends at the first meeting. Some would be my tourist guide when I visited their hometown. These are all friendships I gained through collecting stamps,” said Xu.

Xu was especially moved by some of his stamp friends whom he had never met.

“I spent 20 years collecting a set of ‘Huangshan Mountain Scenery’ stamps. The last piece I collected through this kind of postal newspaper,” said Xu.

He saw the last piece he lacked on a postal newspaper from Heilongjiang Province in northeast China, remitted the money to the owner and in a few days received the stamp that he treasured a lot.

For Xu, the friends he made through collecting stamps are honest and he has never been cheated by them.

As a teacher, Xu also passed his knowledge about stamps to his students and his passion for collecting them.

In 1996 Xu was transferred to work at Songjiang District Children’s Palace. The stamp collection club he founded then was popular with students and parents.

The year 1998 saw the establishment of Songjiang Children’s Post Office, the first of its kind in Shanghai. As chief of the institute, Xu launched activities that included competitions in stamp design, speaking and reading.

In 2014 Xu returned to live in his hometown of Jiading. He bought an apartment in Anting and allotted 80 square meters of his home to be his stamp exhibition area.

“Whether it is a stamp, an emblem or other collection, they have something in common: These things can reflect the characteristics of an era, they are of historic significance. What a collector actually collects is history,” said Xu. 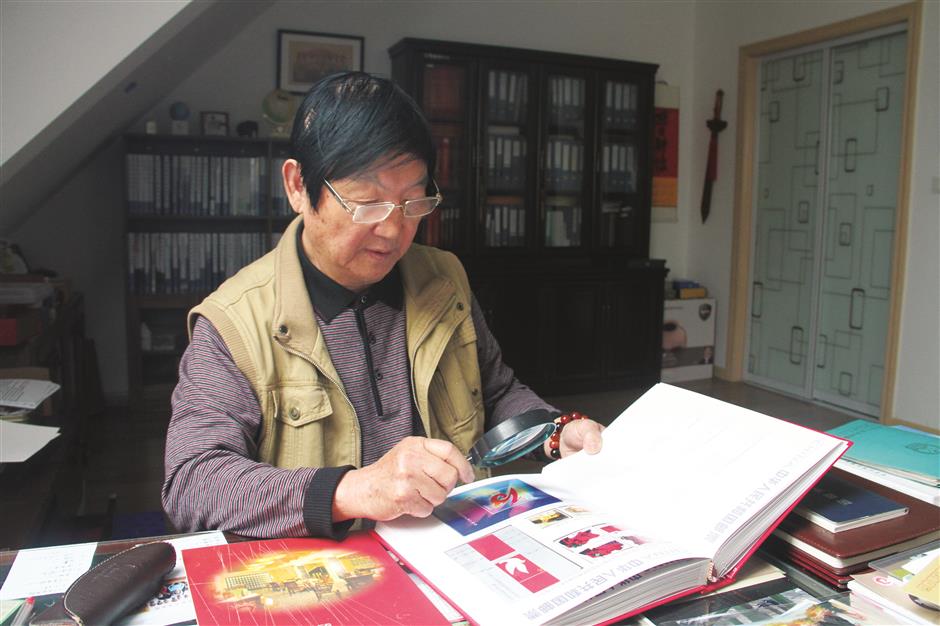 Xu Jin looks at a stamp album with a magnifier.