Curator plans future with nature as a monk

Yun Cheagab is typing on a computer in his office, a glasshouse with a clear city view, flooded with sunshine. He stops and contemplates, maybe he is thinking about his planned retirement.

To many people’s surprise, he wants to be a monk in Tongdosa, one of the three most important temples in South Korea.

“I have been surrounded by so many artificial products and plastic gardens for 40 years, it’s time to go back to the woods,” he said.

But that is one for the future.

Presently, Yun is the curator and director of HOW Art Museum in the Pudong New Area.

The 51-year-old South Korean left Seoul in 1994 and came to China to study art history at the Central Academy of Fine Arts. He later went to India for further study, before working in Seoul, Beijing and New York for about eight years.

Yun then took up an offer in 2012 from his friend, Zheng Hao, founder of HOW, to be his successor, but didn’t originally settle in Shanghai.

“Every month, I spend 10 days in Shanghai, 10 days in Seoul with my family and 10 days in another city like New York,” Yun said, before pausing for a second and proudly announcing, “Well, my Chinese is not bad, right?”

Aside from his work, Yun enjoys exploring Shanghai.

“I like the Bund very much. It’s the most artistic place in Shanghai. It’s like a melting pot of people from different countries and religions,” he said. “When I am in Shanghai, I usually have a drink with my friends on the Bund on weekends.” 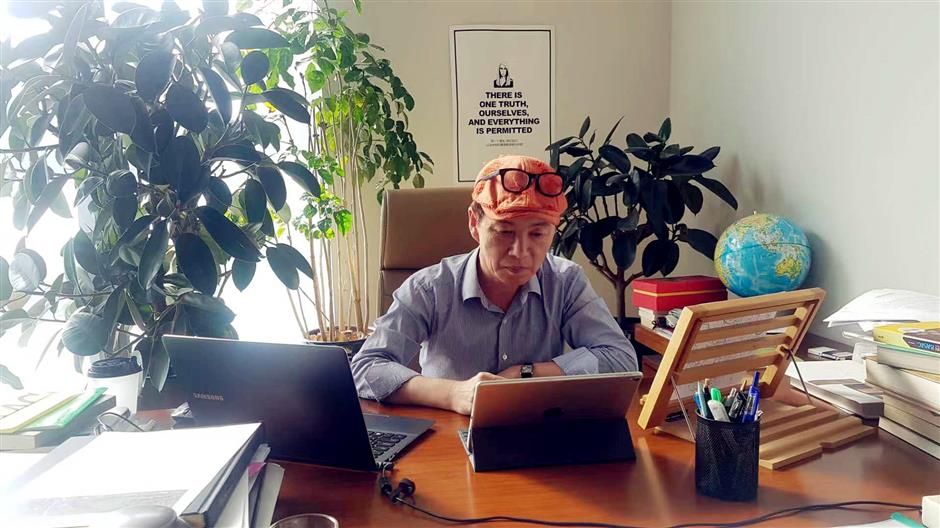 Yun at work in his office.

Q: You studied in South Korea, China and India. What made you go to India instead of staying in China?

A: In 1994, I came to Beijing. When I was in the Central Academy of Fine Arts, I determined to have a thorough knowledge of Asian art history. As I went deeper in this area, I noticed that South Korea and China share many things in common. I found China had learned a lot from India, like math, Buddhism and psychology. So, I grew interested in India.

Q: What was your first impression of Shanghai?

A: I have seen many famous cities in the last 20 years. London has many old buildings. New York is occupied with skyscrapers. Shanghai is like an Eastern New York. But I like Shanghai better.

Q: Can you describe a typical day in Shanghai?

A: Well, I keep a regular schedule every day. I do some sports, read some books and learn a foreign language in the morning. As a curator, I come to work in the museum after lunch. At night, I usually spend some time with my friends on the Bund. We get together to have a drink and try new restaurants every weekend. Shanghai is a big city and it’s overpopulated. Thanks to my friends, my life is not so lonely and boring.

Q: In recent years, art museums and galleries have sprung up in Shanghai. What do you think of this process?

A: Big cities and their galleries expand simultaneously. Shanghai is still developing and it has big potential. I can sense that hundreds of art galleries of different sizes may bloom in Shanghai in the near future. Many are still struggling to find their way. They still need 10 to 20 years to improve themselves.

Local museums don’t have many independent or unique ideas. All exhibitions copy the Western ideas. So, Shanghai and its art galleries still need time.

If Shanghai wants to stand out, curators need to ask themselves, “Why are we staging this exhibition?” If they cannot come up with an answer, it’s pointless to hold the exhibition. Most museums in Shanghai are only 5 or 6 years old. They have had no time to develop their own curators. So we copy the West. We have zero judgement, so it’s a kind of fake art museum. 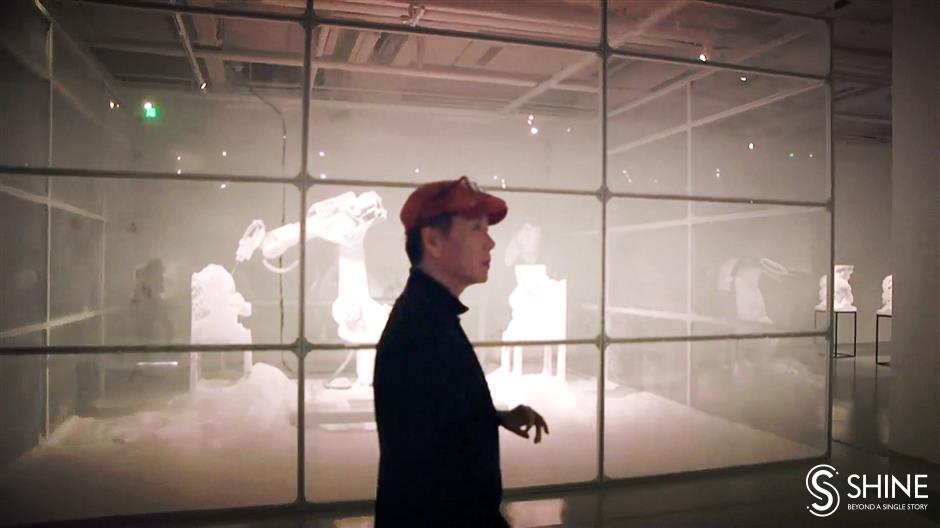 Yun Cheagab at work in HOW Art Musuem.

Q: Which place in Shanghai do you think is the most artistic?

A: The Bund is a synthesis of the modern and contemporary, East and West. People from different countries, different religions and in different colors get along well in this place. So, Shanghai has become a melting pot of various cultures. In 10 to 20 years, Shanghai will be a mature city.

Q: What made you pursue a career in the art world?

A: My mom is a painter. I made up my mind to be an artist in high school, mostly because of her.

A: I work in an art museum, so I cannot say that I prefer one particular artist. I am fond of many artists, but I like to help curators to match artists with suitable museums.

Q: Do you have any advice for people who want to pursue a career in the art world or become artists?

A: All staff at HOW studied abroad, but I still feel that they are lacking in thoughts and experiences. They are in their twenties and, fortunately, they are very clever. If they were in their fifties, and combined some aspects of Western contemporary art with Chinese culture, they could create a whole new path, but they need to grope their way forward for 20 years. It is doomed to be difficult.

Q: If you choose just one work of art and put it in your room, what would it be and why?

A: There is no art in my home. Once I see a piece of artwork, I begin to analyze it. It’s actually very wearing. My home is a place to relax, so I avoid such disturbance. People often go to museums to have a break. But I’m different. I spend most of my time reading and the least time possible in exhibitions.

Life and art are inseparable. They all use our five senses. We eat with our mouths, we read with our eyes, and we use ears to listen. We can decide whether we just live to survive or live for beauty. It’s up to us.

Q: Why did you choose to spend time in a temple?

A: I go to temple every six months. There are no books, music or exhibitions in the mountains. I live the simplest life and eat the plainest food. When I come back two weeks later, I may have new interpretations of an exhibition I saw two weeks ago.

It became a habit when I was 35. Every month, I have to stay 10 days in Shanghai, 10 days in Seoul and 10 days elsewhere. These cities are all plastic gardens. So, a two-week rest in a temple can revive me.

After 10 years, when I’m 60, I want to retire and be a monk, living with nature. My three children will have grown up. I will have worked hard for them in the last 40 years. So I want my freedom in Tongdosa.

Q: How do your visits to the temple change things?

A: It’s odd that contemporary art is not so happy. Even though material is rich nowadays, artists like to present misery and woes. I am not comfortable with this, so I need to relax.

I used to spend two weeks every six months. Now I go there every three months.

Maybe in five years, I will go there every month. I do the most trivial thing in the temple — cleaning the Buddha.

In this process, I have time to think about the essence of art. Artists don’t learn from teachers. They track back to the very beginning of civilization, and rethink human nature.

That’s the way to be an artist. My current life is filled with artificial buildings and artificial art. They are not natural. I held an exhibition called Plastic Garden in Shanghai Minsheng Art Museum, but I really want to live in the mountains and be with nature. My family is well aware of my thoughts and they support my decision.