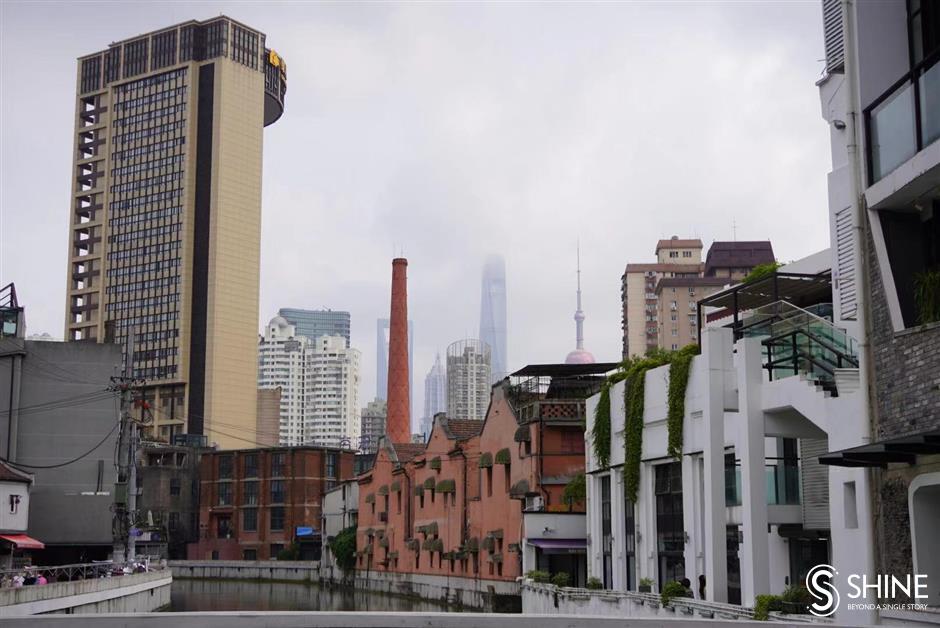 Sceneries around the Shanghai Music Valley, which is known for its historical buildings and old lilong

Shanghai Music Valley welcomes a flood of travelers, tourists and locals on a daily basis keen to embrace its historical architecture, renovated buildings and the city’s unique ecosystem of rivers and canals.

The “valley,” in the south of Hongkou District and close to the Hailun Road Station of Metro Line 10, covers 280,000 square meters.

The area, with three rivers stretching 1,200 meters and eight century-old bridges, is known for its historical buildings and old lilong, first built around the 1840s. Lilong is a community of lane houses with narrow alleyways .

One of the most famous historical buildings in this area is the 1933 Shanghai, also known as the Old Millfun.

The structure once housed the Shanghai Municipal Council Slaughterhouse, the largest abattoir in the city at that time. It was built around a central atrium, which served as the slaughterhouse’s workshop. Each floor is connected to an outer shell by a series of interlocking ramps, bridges and spiral staircases, which were designed to control the flow of both people and cattle being processed through the building.

Harbin Road is one of the hottest places for Instagrammers in Shanghai and it is also a great place to enjoy a cup of coffee or just take a walk.

The Old Commercial House 1913 used to be an ice making factory with investment from the Hutchison firm.

Over the past 100 years, it had been turned from an old foreign firm into an architectural “cluster” due to many illegally erected structures. However, in a creative renovation project the old buildings were restored to their original state.

The Harbin Building, built in 1929, used to be a sawmill before 1942. It later became a talent training center, providing vocational and technical training for homeless people in the city during the 1950s.

The building, surrounded on three sides by water, was turned into the Peninsula Bay Fashion Culture Creative Industrial Park in 2013, where a large number of companies in multimedia, commerce, tourism and recreation industries created a base for their businesses.

The side of the building along the Shajinggang River is covered with creepers, providing visitors an opportunity to enjoy the beautiful riverside view on the terrace of the Peninsula Bay. The terrace, boasting copper pipes dating back to 1929 and mossy green bricks, has many stories to tell. 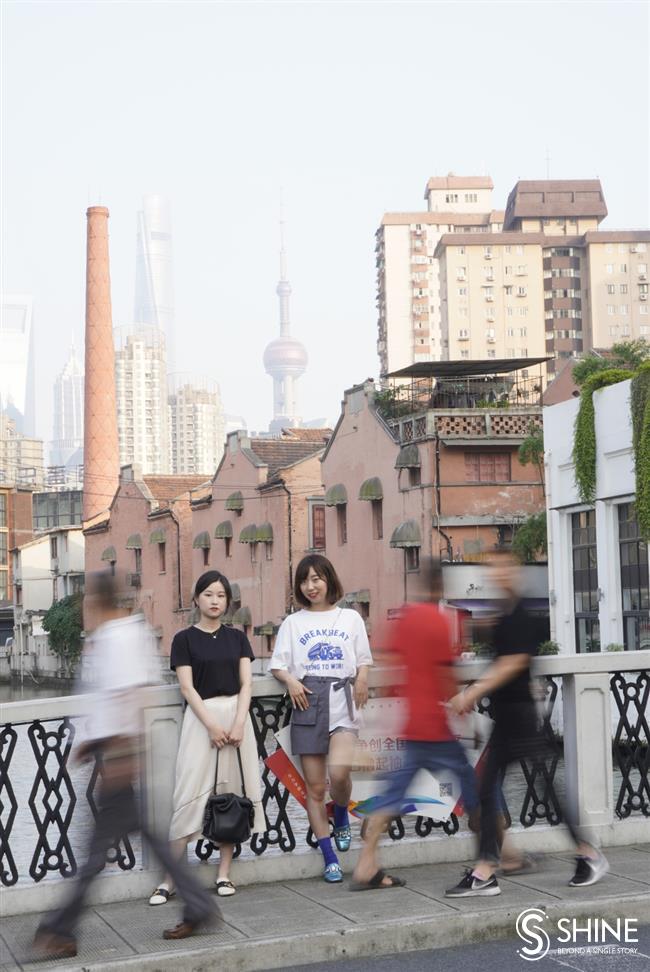 The century-old bridge at the beginning of Harbin Road is honored as one of the best shooting spots in Shanghai.

A century-old bridge at the beginning of Harbin Road is said to be one of the best shutterbug spots in Shanghai, according to Liu Jing, director of Party-related affairs department at Shanghai Music Valley.

Visitors will find eye-catching views from the bridge showing 100 years of architectural change in Shanghai, including the landmarks of Lujiazui in the Pudong New Area, built in the 21st century, the historic buildings along the river and the local residential buildings constructed between the 1970s and the 1990s.

Beyond the historical buildings, music culture is also a highlight here. That is the reason the Music Valley got its name.

“In the center of this area there used to be the sound-recording booth of Shanghai Audio-Video Co. On December 22, 2017, the National Music Industrial Park was officially unveiled in Shanghai Music Valley. The music industry will be the feature of this area, and music-related events and shops will also be an attractive point,” said Liu.

There are also several studios for pop stars inside the Shanghai Music Valley, making it a popular place for music fans. The studios include the Niuban Music School, founded by Shanghainese singer-songwriter Hu Yanbin, and the Xiulouti dancing school founded by Taiwan singer, actor and host Show Lo.

The most famous studio is the SNH48 Star Dream Theater, which holds more than 150 performances throughout the year by the Chinese idol girl group SNH48. The theater building was constructed in 1932 and formerly known as the Tiantang Theater in the 1930s. It was designed by the famous British Atkinson & Dallas architects.

For travelers, this area is not like the touristy Xintiandi, but it’s still a Shanghai local community offering visitors interesting walking options and opportunities to explore the unique old lilong architecture.

A renovation of the lilong began in the early 20th century. Most of them, such as Ruikangli and Langweili, were designed by famous architects at that time.

There are dozens of opportunities to explore the many splendors of Shanghai Music Valley and iDEALShanghai has picked out some highlights. 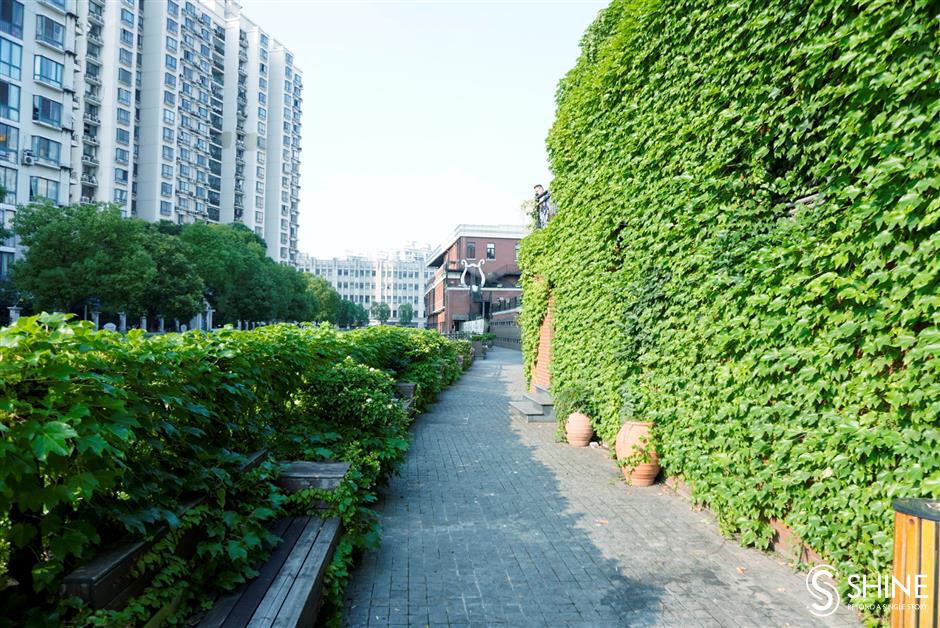 An alley along a building is covered with creepers.

Located inside the Peninsula Bay Fashion Culture Creative Industrial Park, the Upper Bookstore is a must-go destination. The bookstore is famous for its special design, created by one of the partners, Han Jing, an architect graduated from Tongji University.

The 4.2-meter-high space is divided into three independent floors with display spaces for different genres of books and sitting places for readers. The distinctive design allows the small area of 250 square meters to store over 10,000 books and provide plenty of seating space.

Co-founders Han and Zhao Qi spent a whole year renovating the space into a bookstore, and at the store’s opening day in 2015 lots of visitors came to take photos and post them online.

“We don’t like people coming here to take photos instead of reading, so we decided to ban photographs inside and keep it quiet for the real readers,” said Zhao.

The Upper Bookstore has naturally grown into a paradise for book lovers.

There are more than 10,000 books in the small bookstore, and a large amount of them are about architecture and urban studies, many of which are written in English.

“Actually we don’t choose to stock bestsellers. The books mainly cater for a minority reader group. For me, a good book is worth reading a second time and has a sense of form,” Zhao said.

You can also find some creative products, such as a series of brooches inspired by Chinese insects. 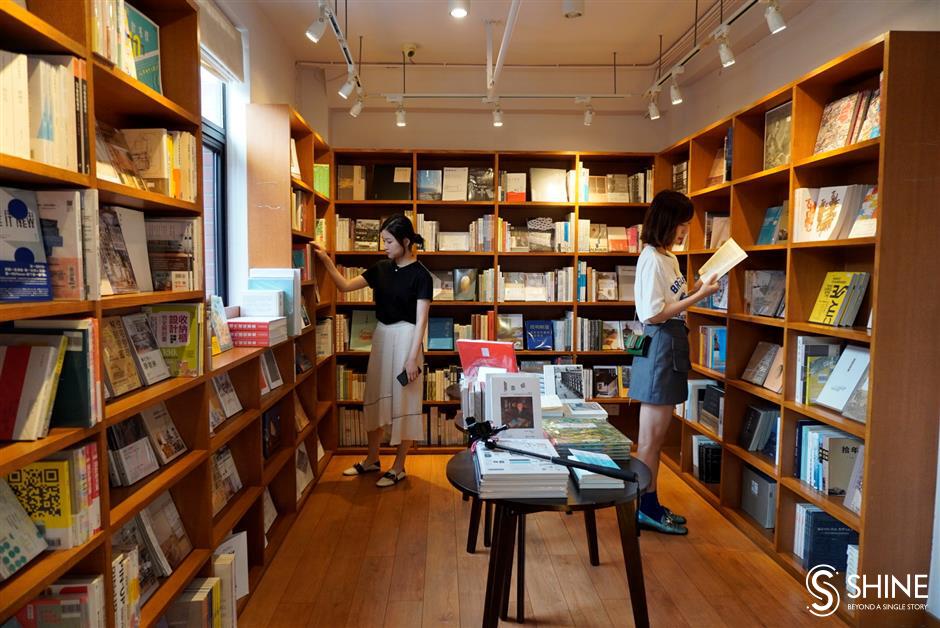 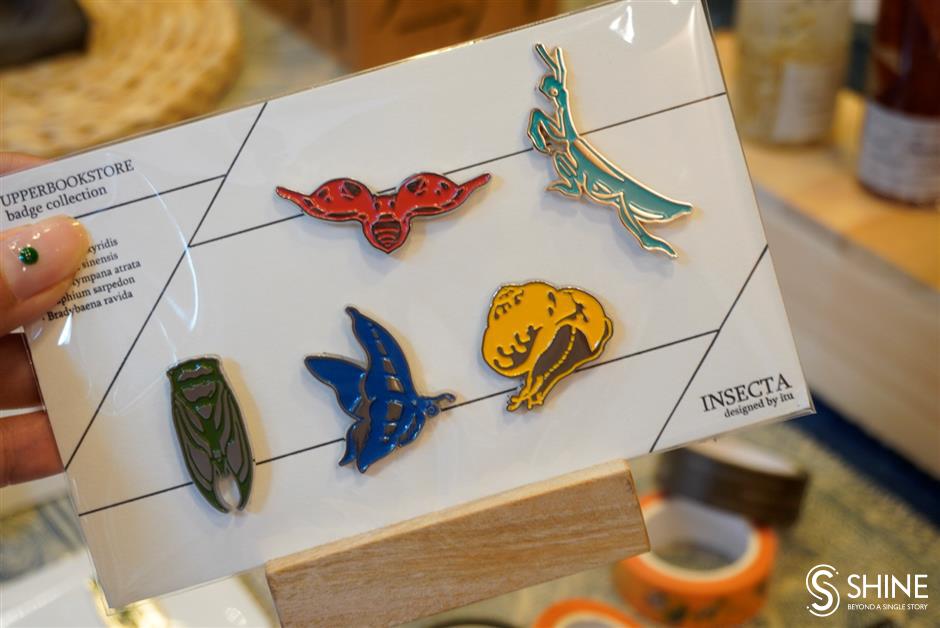 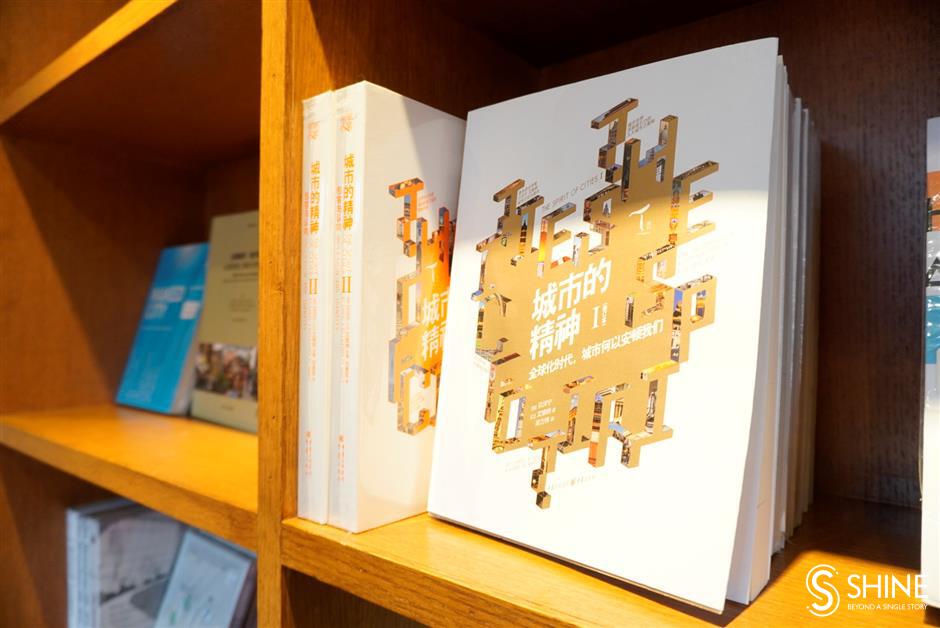 Fans of the American TV series “Friends” will be fascinated by the window display of this coffee shop.

A replica of the iconic couch is just in front of the window, with a conspicuous “Central Perk” sign on the wall, which is the name of the coffee shop in the popular TV series.

The menu is also a tribute to the TV series.

You can find the gang’s favorite foods on it, such as Joey’s double burger and Ross’ Thanksgiving sandwiches. The details are also pleasantly surprising: The Friends’ names are imprinted on the latte and the lines spoken by the characters in the series are printed on napkin tissues. And fans of “Friends” can sit on the couch and watch the TV show all day long if they want to — or take photos alongside the TV series’ props. 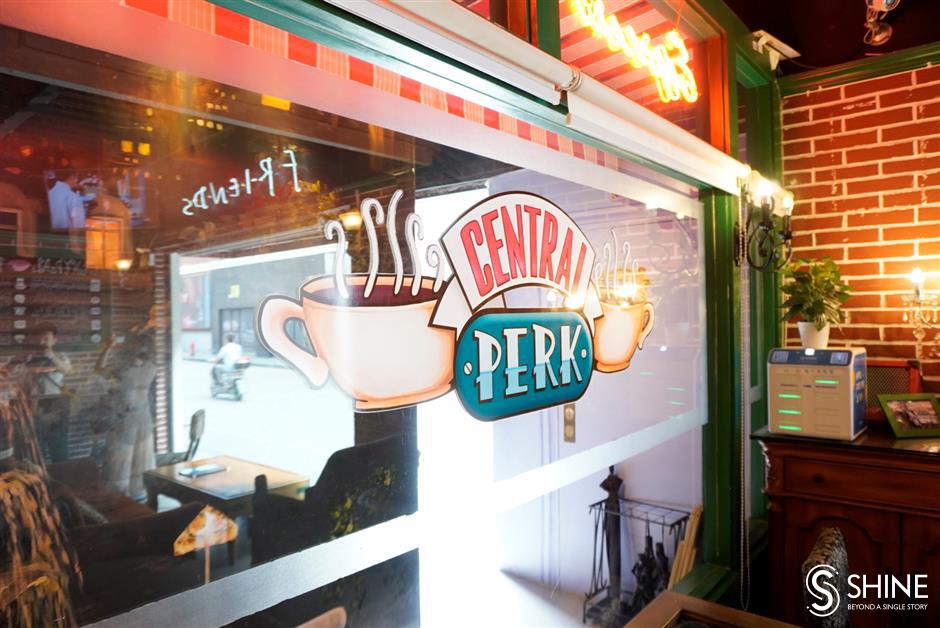 The Friends Cafe is a tribute to the American TV series “Friends.”

When you first pass the delicacy shop with plants at the gate, the last thing you would expect inside is a coffee school. At the first glance it looks like a boutique cafe, but when you step in, a blackboard full of coffee knowledge and a coffee roasting machine catch your eyes.

There are several coffee courses at the school including 10 lessons in barista skills for a starter. Each class is three hours long and after completing the course you can make all kinds of Italian coffees by yourself.

Two of the iDEALShanghai reporters took part in a coffee class. Cai Yuankai, the teacher, taught them how to grind and tamp coffee powder, split expresso and make latte art.

He also gave tips for judging a barista. A useful one is the flow time during coffee extraction: 20 to 30 seconds is normal.

If a barista uses less than 10 seconds or more than 50 seconds to do the extraction, the work fails. The correct weight of expresso is also important and a scale is necessary. 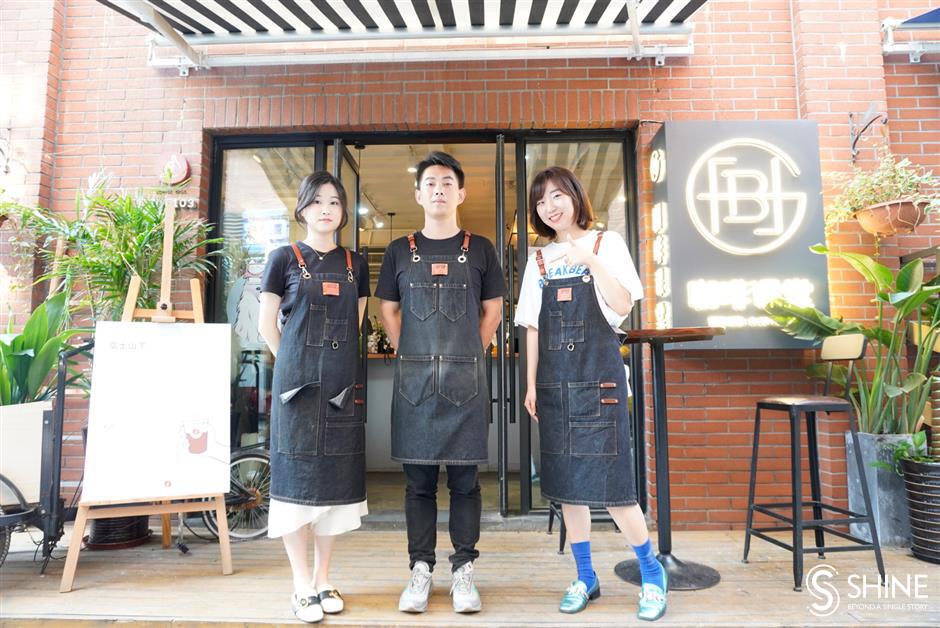 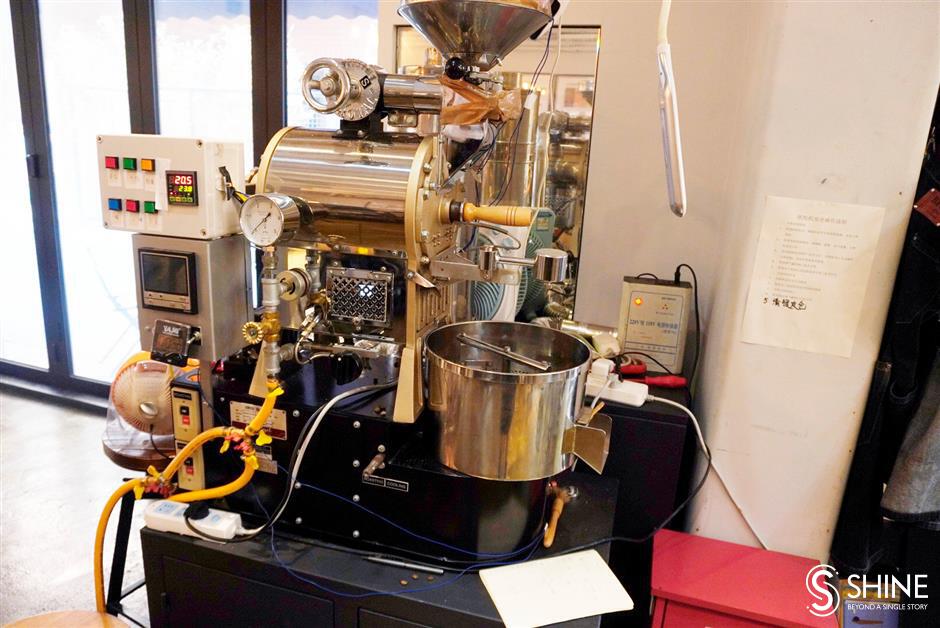 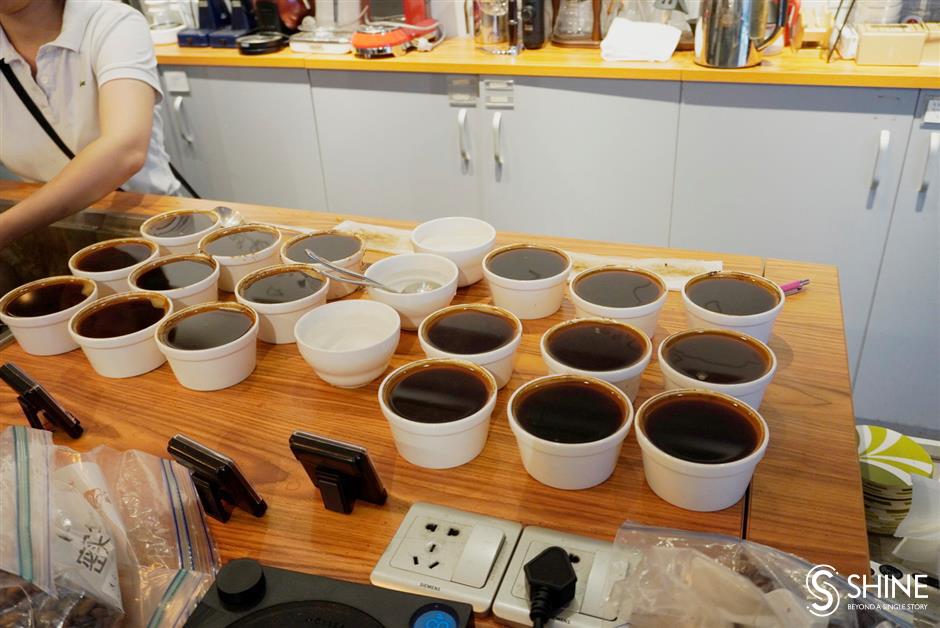