The Rolex Shanghai Masters not only provides Chinese wildcard players with precious opportunities to exchange skills with their world-class counterparts, it also creates a combat field for domestic tennis referees and umpires, a fast-growing group amid the development of tennis in China.

Yang Yong is one of China’s first and most experienced tennis official representatives. He took up the role of chief umpire at the Rolex Shanghai Masters in  2012, while he previously worked as a line umpire in the Shanghai Masters Cup and Grand Slam tournaments.

The 37-year-old is certificated as a gold-badge chief umpire and a bronze-badge chair umpire by the International Tennis Federation.

Yang manages over 70 line umpires at the Shanghai tournament every year. Most of them are Chinese with the exception of six foreigners sent by other tournaments for exchange programs.

Among the tournament’s 11 to 12 chair umpires, seven are sent by the ATP and Yang is responsible for finding the rest.

For Yang, the most challenging but  fulfilling part of the work is to coordinate on all levels with officials during a tournament.

“I’m responsible for a smooth and efficient communication among chair umpires, line umpires, ball boys and girls, as well as the referee and tournament supervisor,” Yang told Shanghai Daily.

“I have to be aware of line umpires’ ability and form, keep them motivated. Some get upset for not working in matches featuring star players, and I would need to balance their schedule and emotion.

“The work requires comprehensive ability, and it gives full play to my management skills and emotion quotient.”

Yang has witnessed the growth of Chinese tennis officials over the past two decades.

“I remember clearly that in the 2002 Shanghai Masters Cup there were only six line umpires from China while 14 were foreigners,” said Yang. “With the growth of tennis tournaments in China and the country’s preparation for the 2008 Beijing Olympic Games, Chinese umpires got their skills improved in both domestic and international tournaments.

“Now, we are not inferior to our foreign counterparts. Chinese officials are also working in the Grand Slams finals.”

The ITF has an evaluation system for its officials, who will have to take online and offline courses and go through tests to maintain their standard certification or seek a higher level.

It took Yang five years to upgrade his chair umpire’s white badge to a bronze badge. As a bronze-badge holder, Yang has to preside over at least 40 international matches a year.

Yang, who is currently working for Alisports, revealed that to get a silver badge he would probably have to abandon his current job, which is not in his plans at the moment.

Yang recalled the first time he took up the role of line umpire, at the 1998 Heineken Open in Shanghai, was when he worked for the Shanghai Sports Bureau.

“That was when Shanghai just began to host international tennis tournaments, and we realized we had a lack of domestic umpires and officials,” said Yang.

“Language skill is a must for the job and there were two solutions: To let those good at English learn tennis refereeing or the opposite way, let Chinese-speaking tennis referees learn English. Obviously the first solution is much easier, and that was my case.”

Yang was line umpire for the Shanghai Masters Cup in 2002 and between 2005 to 2008. He then worked at Beijing’s China Open for a few years before becoming the chief umpire at the Rolex Shanghai Masters in 2012.

“Umpires sometimes use instinct for judgements,” Yang said. “I still remember the pressure we felt as line umpires when Hawk Eye was first used at the Shanghai Masters Cup in 2006. It felt like the whole world was watching whether you were making mistakes.

Yang plays tennis himself, who, like a lot of Shanghai tennis followers, is an admirer of Roger Federer.

“He illustrates all the top qualities required of a tennis player, including skills, elegance and discipline,” said Yang. “The job gave me a different angle to observe players.”

Yang said he was also impressed by Rafael Nadal’s modesty and politeness off court during the Shanghai Masters Cup.

“Nadal showed up in a VIP box for the sponsors to watch a match, however, a member of staff in the box was not aware of his identity and required him to leave the box during interval,” Yang said. “Nadal, without saying a word, nodded and quietly left the box, which was quite surprising for me.”

Yang said tennis tournament experience has provided him with inspiration when dealing with his current job.

“Tennis stands at the front-tier of all sports regarding the application of technology and commercial operation,” said Yang, who is in charge of the operation of Hangzhou Marathon. “The way  Rolex Shanghai Masters serves players can become a reference when we provide service for runners during the marathon events.

“The application of information technologies in tennis and the various ways tennis tournaments benefit their sponsors, and their marketing methods, can all be borrowed by running event organizers,” said Yang.

“The new 25-second service rule, for example, will speed up the match while having both spectators and the audience in front of the TV involved.” Yang added.

“Running events can learn from that and introduce innovative rules and competition forms like relay.” 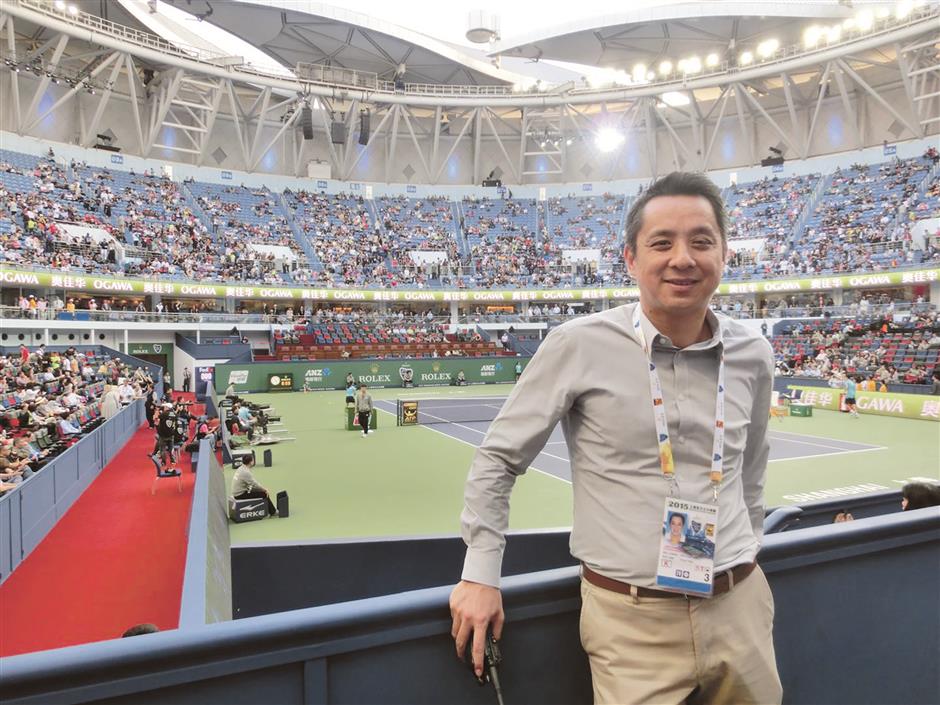 Yang Yong is one of China’s first and most experienced tennis official representatives. He took up the role of chief umpire at the Rolex Shanghai Masters in  2012, while he previously worked as a line umpire in the Shanghai Masters Cup and Grand Slam tournaments.

The line umpire calls all shots relating to the assigned lines. They signal a ball out by making a verbal “out” call followed by the extension of an arm in the direction the ball is out. A ball is signaled “safe” by holding both hands together knee-high in front of the body.

The chair umpire is the final authority on all questions of fact during a match, including whether a ball is in, the calling of a service let or calling a foot-fault. In matches where line umpires are also assigned, the chair umpire has the right to overrule if he or she is sure that a clear mistake has been made.

The chief umpire is responsible for the recruitment and hiring of officials for the tournament, who assigns umpires to courts and coordinates among officials.

The referee is responsible for assuring that the competition is fair and played under ITF rules, who supervises all of the aspects of play at a tournament including the conduct of players, coaches, spectators and administrative crew. Any player may appeal the chair umpire’s interpretation of tennis law to the tournament referee.

Tennis officials are certified by their respective national association. The ITF certifies officials in the three categories of chair umpire, referee and chief umpire.

The first, green badge, is sufficient within the official’s own nation and is not divided into categories. The second, the white badge, has three categories of chair umpire, chief umpire and referee, which remains only a national certification.

The following three of bronze (chair umpire only), silver and gold badges are international certifications. The holders are those seen at the highest levels of play like the Grand Slams, ATP and WTA Tours, and the Fed and Davis Cups.