A cultural trip in Minhang District

Spend a weekend in Shanghai suburbs? iDEALShanghai took a day trip to Minhang District. From the “Over and Over Again” new media art world tour at the Powerlong Museum to the cultural and historic attractions in Maqiao, there is much more to explore, Li Fei reports

The Powerlong Museum in the Qibao Business Ecology Zone in Minhang District presents worldclass visual arts. From the building itself to the exhibitions inside, the museum carries forward the essence of traditional culture and promotes the development of contemporary art.

It is currently hosting the exhibitions “MOTSE: Over and Over Again” new media art world tour and “All Rivers Run into the Sea — Shucang’s Collection.”

The “MOTSE: Over and Over Again” new media art world tour will be in Shanghai until November 10.

Seventeen large-scale works of art in various forms, such as new media interactive images, mechanical power devices and static sculptures, are presented by the sponsor of the exhibition New Media Art Team MOTSE. During the 120-minute exhibition time, the audience will experience a dream-like journey of new media art in a 2,200-square-meter art space. The exhibition tries to help audiences redefine self-identity by breaking away from the shackles of identity and desire conferred by social life.

Shucang’s Collection is a permanent exhibition at the museum, a fine collection of calligraphy and paintings of Hoi Kin Hong’s family. Shucang Library is a library named by Hoi Kin Hong in honor of his father Hoi Shucang, also the family’s art collection house. Many of the objects are masterpieces of modern and contemporary Chinese artists as well as the works of contemporary artists of world influence. They systematically showcase the collections of representative artists from different regions and schools in China over the past hundred years. 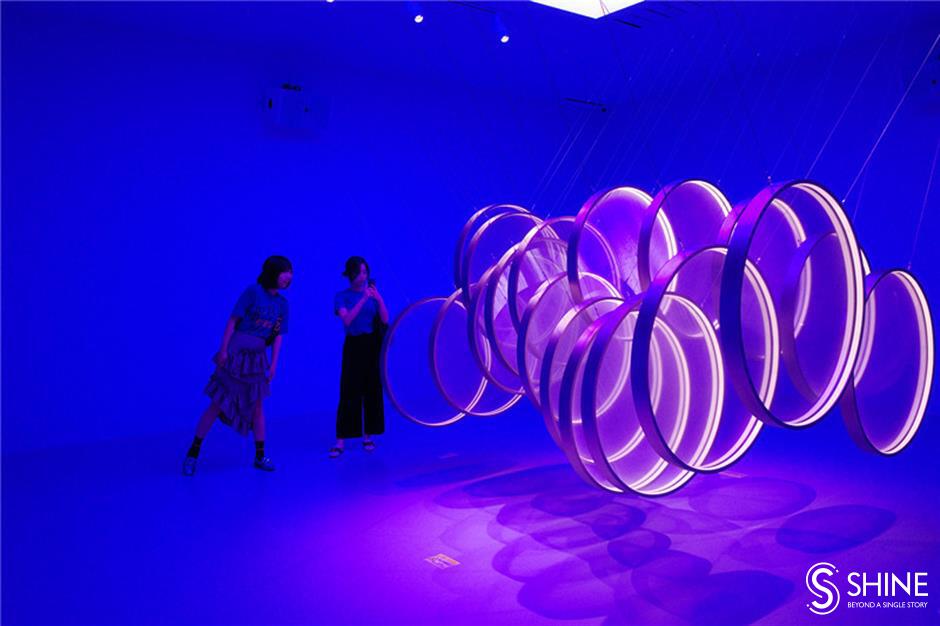 Fiona Li (left) and Shirlene Gu are fascinated by a new media installation at the Powerlong Museum. 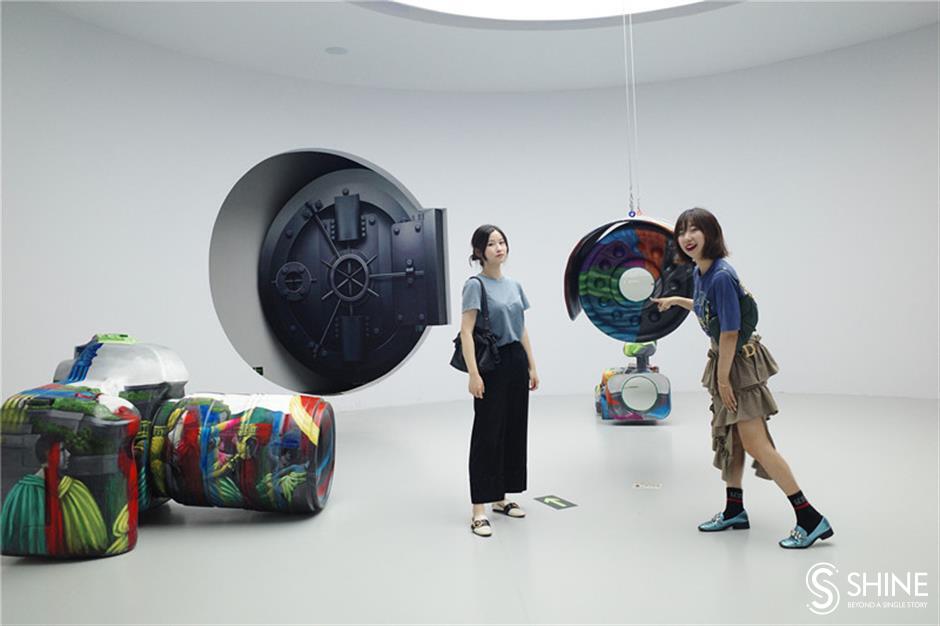 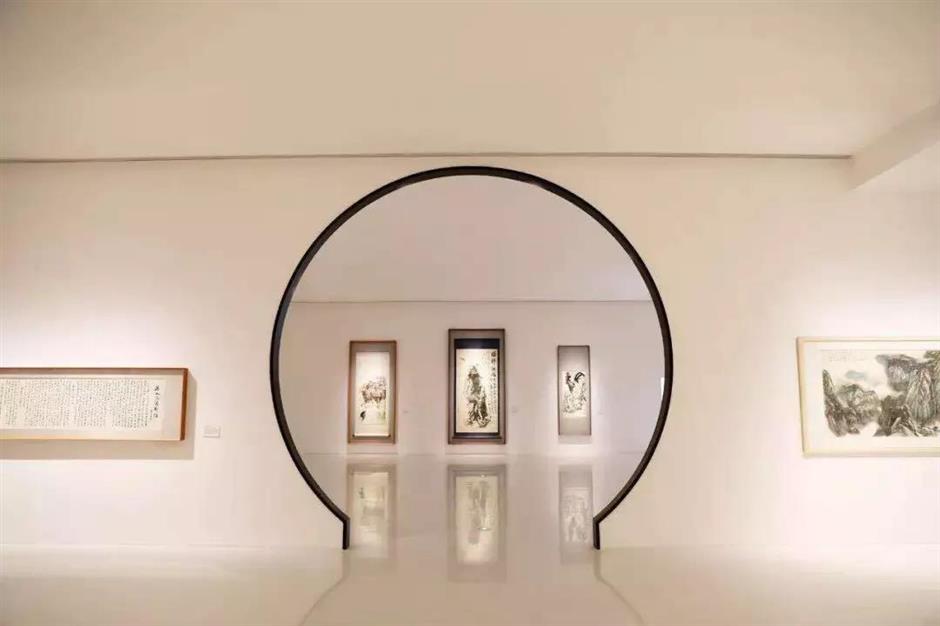 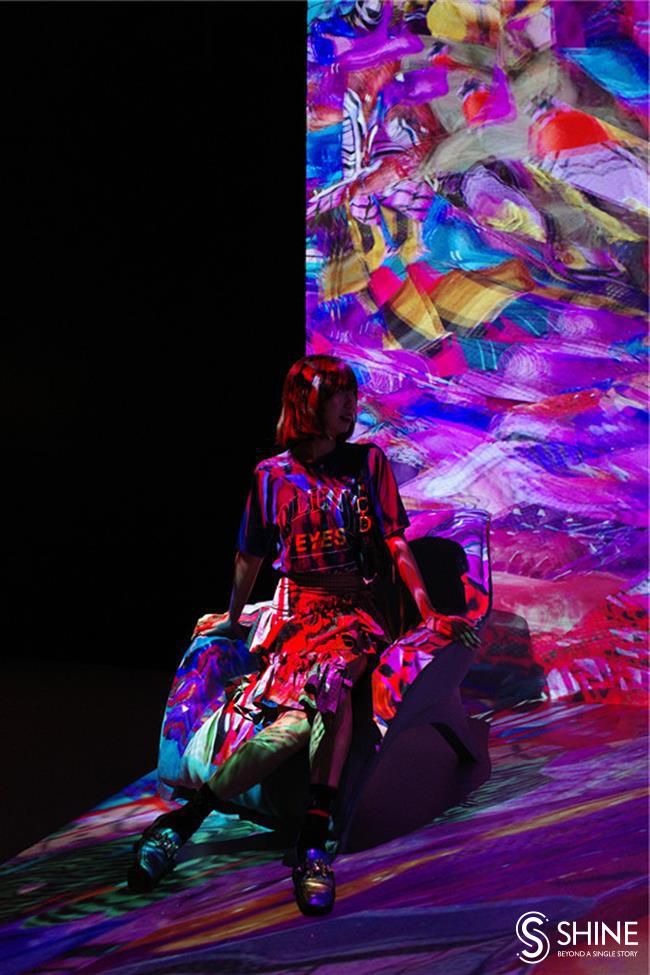 Fiona Li sits on a sofa, immersed in colorful lights. 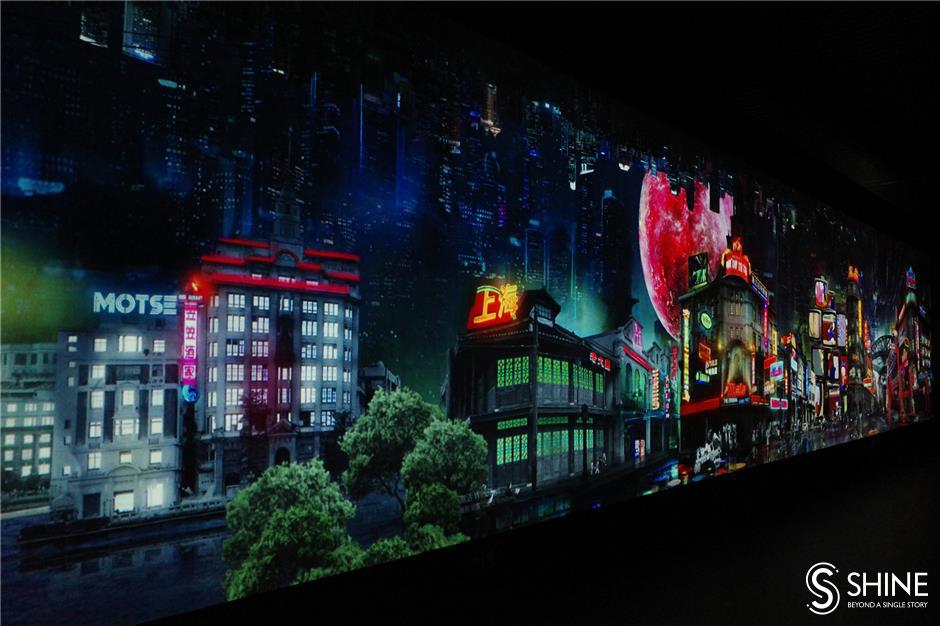 A digital installation at the MOTSE exhibition

One of the three main ancient Shanghai cultural relics, the Maqiao culture of Minhang dates back about 3,900-3,200 years, it is located on the top of an embankment known as the “Bamboo Grove” in Yutang Village, Maqiao Town of Minhang. The other two are the Songze culture of Qingpu and the Guangfulin culture of Songjiang.

The site was discovered in 1959, and more than 1,000 pieces of archeological relics have been unearthed so far.

In 2013, it was declared a major historical and cultural site with national-level protection by the State Council.

In the Maqiao Cultural Exhibition Hall, the most impressive experience ought to be the “Innovative media design experience.” 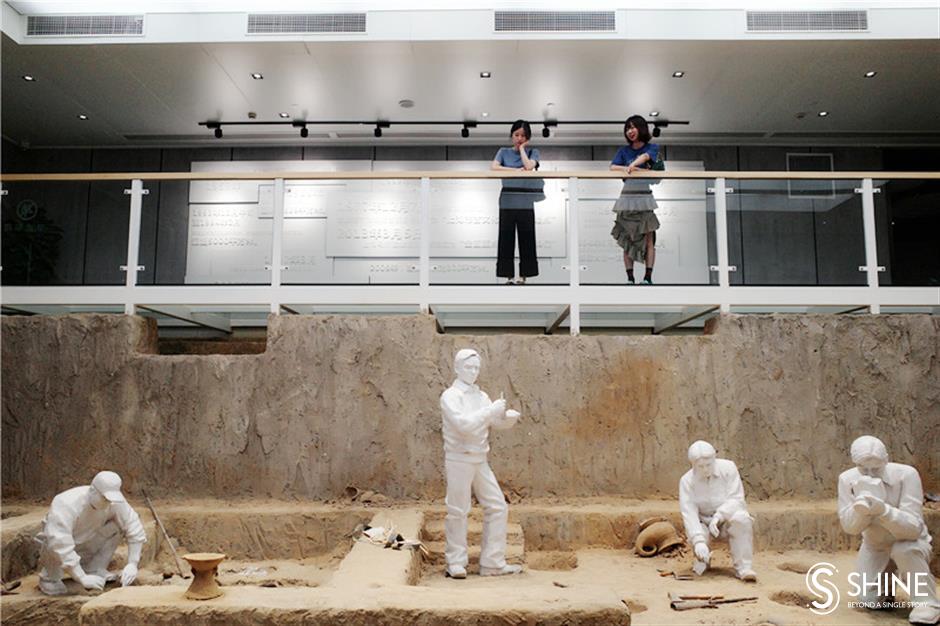 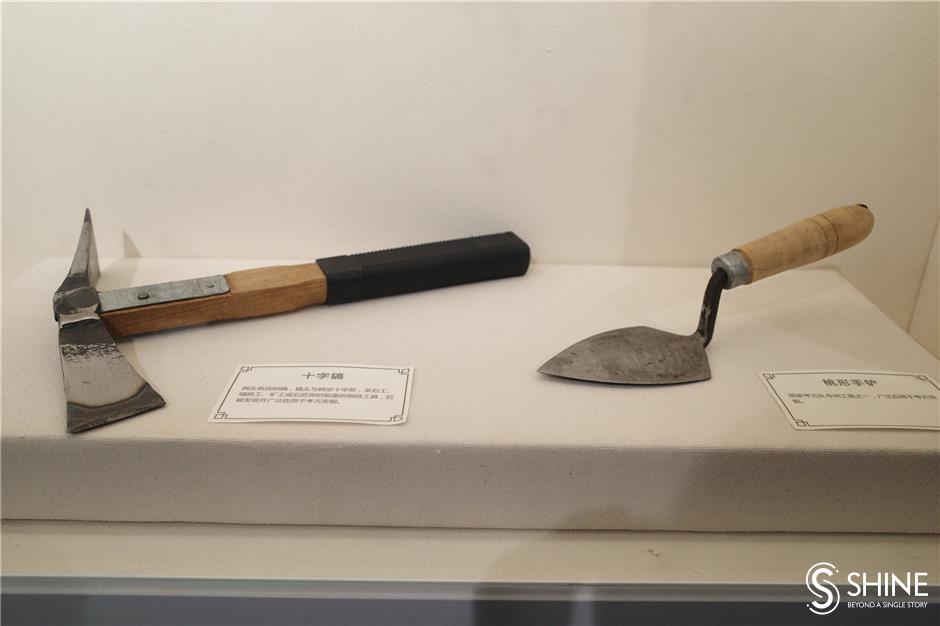 Tools used by archeologists while unearthing the Maqiao cultural relics

The Shanghai-Style Cultural and Creative Store inside Qibao bell tower

About 20 kilometers from downtown Shanghai, Qibao old town is famous for its temples and gardens with most of the architecture preserved from the Ming (1368-1644) and Qing (1644-1911) dynasties.

Now, the only one of the seven to be found is the Cuanlai Bell, and the bell tower is a feature of Qibao.

The newly opened Shanghai-Style Cultural and Creative Store, the brand’s second store, is inside the bell tower.

At present, more than 78 culture and museum related units and cultural and creative enterprises are in the shop, stocking about 1,900 kinds of products, divided into three main sections: Shanghai-school Collection, Brilliant Chinese Culture and World Expo.

There is also a series of Qibao products, including a set of teacups inspired by the seven treasures of Qibao. 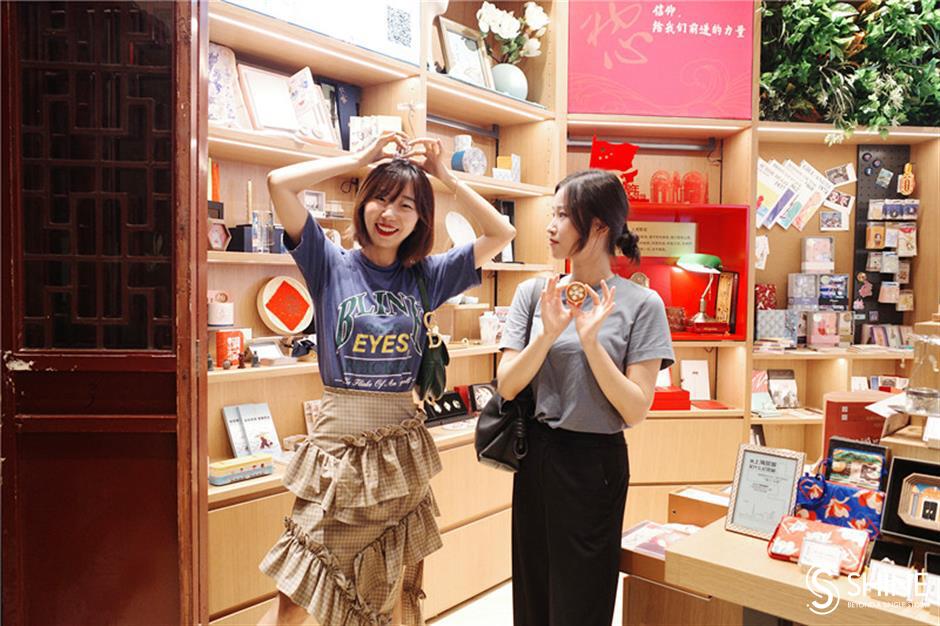 Fiona Li (left) and Shirlene Gu at the Shanghai-Style Cultural and Creative Store. 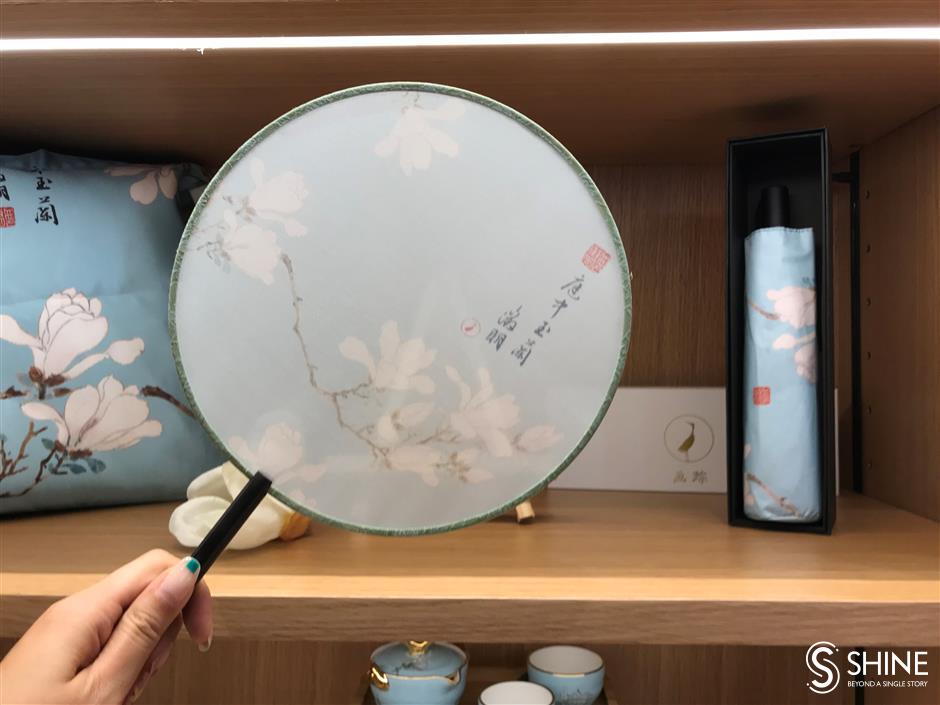 A moon-shaped fan at a store in Qibao 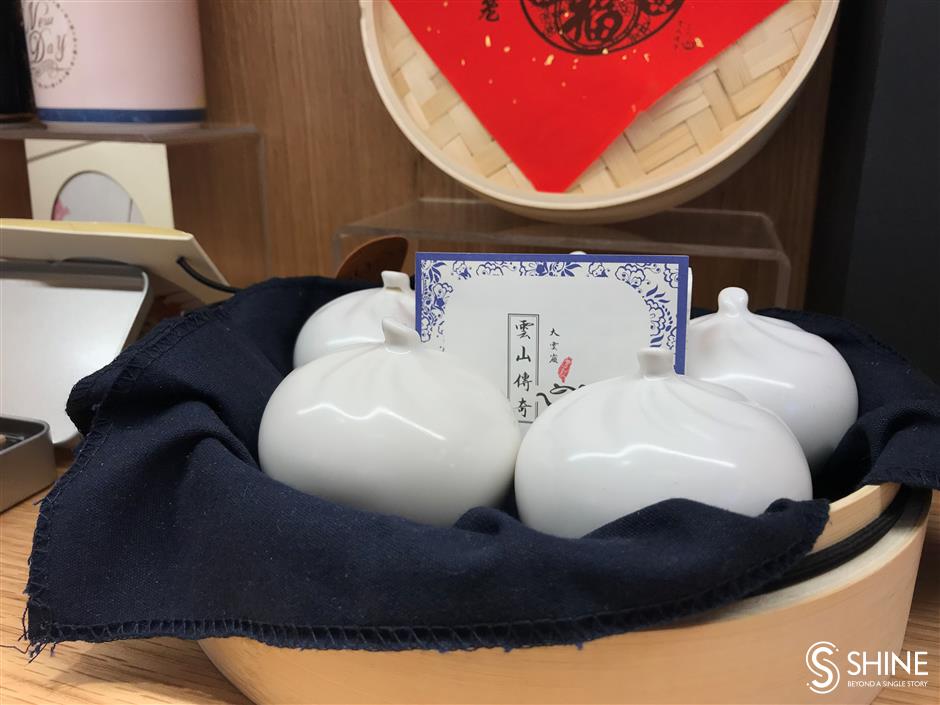 A set of porcelain crafts at a store in Qibao

﻿
Special Reports
ADVERTISEMENT
61766
,
Guide for overseas Chinese students during COVID-19 pandemic
A cemetery that celebrates life and death
Nile threatened by waste, warming, dam
Enchanting abode in idyllic tranquility
Connecting nature, culture and people with design
Fancy footwork: An embroiderer finds her niche
How overseas Shanghainese go through outbreak
Counseling eases psychological toll of outbreak
'Support troops' guard the doors to the city
A guardian of the light ... and of hope for Wuhan
EXPLORE SHINE