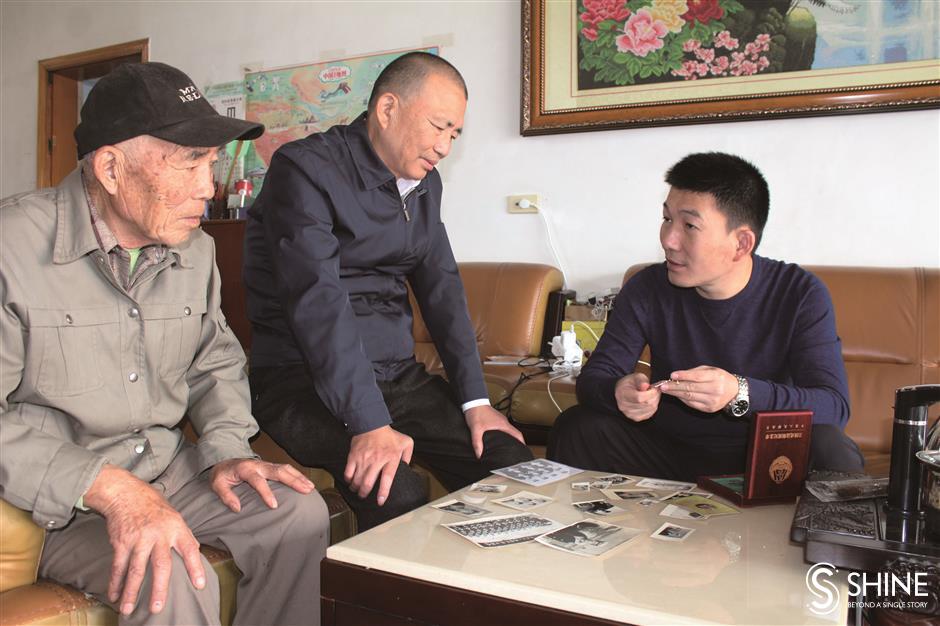 Three retired soldiers, Xu Zhiwen, Xu Jian and Xu Jiaping (from left to right) look at black and white pictures that were taken when they were in the military. Ten members in three generations of the Xu family have served their country in the military. 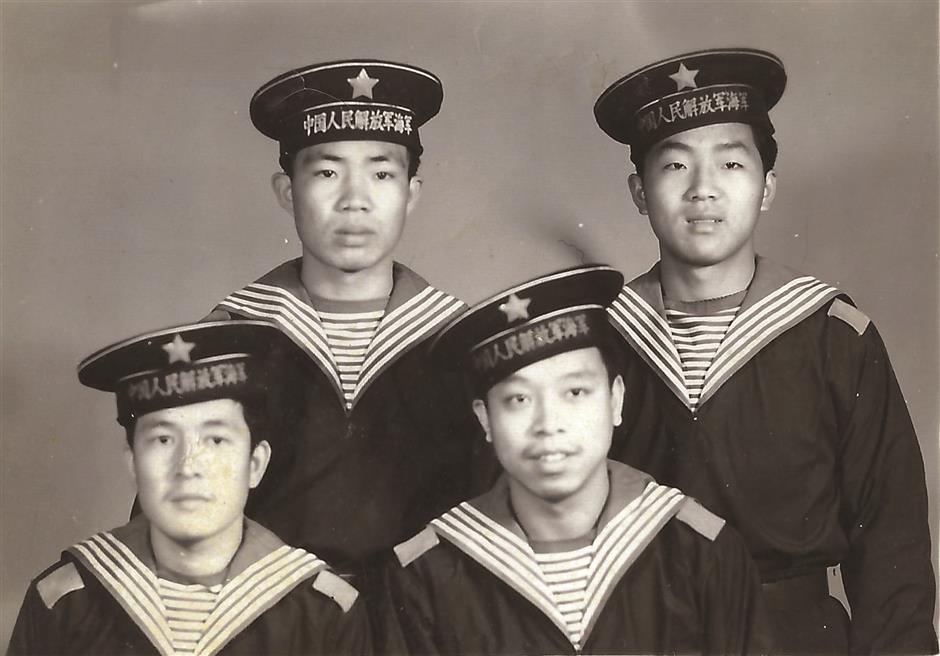 A photograph of Xu Jian (left in the back row) with three fellow servicemen when he served in the navy.

Xu Jiaping (left), the nephew of Xu Jian, also served in the navy.

A retired soldier has his treasure chest just as children make theirs using an empty biscuit box. A child’s box is filled with every new object that fascinates them. A soldier’s box is filled with old objects symbolic of his tour of duty. Every time he opens it, his military past is recalled.

A family of three generations of 10 soldiers lives in Wangxin Village of Jiading’s Waigang Town. The veterans served in the land, sea and air forces. A grandson, an uncle and a grandfather opened their treasure chests of military keepsakes after the live broadcast of a parade at Tian’anmen Square in Beijing on October 1 when President Xi Jinping made a speech and reviewed the armed forces.

Xu Zhiwen joined the military in 1955.

“I was 17. My country was recruiting airforce soldiers at that time. About 100 people in Jiading applied for the position and I was the only applicant in Wangxin Village. But I failed in the last physical test,” Xu said.

Nevertheless, Xu’s military career began as he was welcomed to join a national defense engineering project in Daishan County in neighboring Zhejiang Province as a bunker construction soldier.

“We made bunkers in the mountainous region of coastal Daishan, which was regarded as a second line of national defense to deter seaborne attacks,” said Xu.

Xu retired in 1958 as the national policy then encouraged people to join the agricultural and industrial construction sectors.

“A soldier’s duty is to serve the people and defend his nation. Though life was hard at that time, I was totaling ignoring the fact and focusing on my service,” said Xu.

About 20 years after Xu joined the military force, his son Xu Jian also joined the army. The father saw his son off at Waigang town center and watched as the bus carried his son out of his sight.

“I chose to be a soldier in response to my country’s need and my physical fitness,” said Xu Jian.

Amid the tensions of the Sino-Vietnamese border conflicts, Xu Jian joined the East China Sea Fleet No. 2 Military Training Corps in Jiangshan County of Zhejiang Province in 1978.

“The No. 2 military training corps was then newly established. After one and a half months of military training, we were assigned to barracks construction work. The two-meter-high and one-meter-thick enclosing walls surrounding the military camp people see today were built by us in those years,” Xu Jian said.

“Our instructor told us very emotionally at that time that the naval power of China was still vulnerable though the country has a long coastline. In 1978 only a few escort boats had the capacity to sail to the Nansha Islands. But now we have navy frigates replacing almost all the escort boats. And the frigates can head for anywhere in the world,” Xu Jian said.

Xu Jiaping, of the youngest generation, joined the army in 2004 as a signalman in a missile ship unit in Ningbo in Zhejiang Province. He has grown up listening to stories about the military camp told by the older members of his family.

“I’ve been to the training corps where my uncle stayed and seen the enclosing walls he built in those days. The large bricks were piled up totally by manpower. Compared to my generation of soldiers serving the nation in a peaceful and prosperous era, the past generations of soldiers underwent tougher trials and their bravery and perseverance is worth learning from,” Xu Jiaping said.

“I cried on the day I retired from the army. The last night I felt nothing because I was accompanied by my brothers-in-arms. But the day I disembarked and walked on the wharf, I cried for the first time in eight years since I had been a soldier,” he said.

Both Xu Jiaping and Xu Jian store keepsakes and photos recording their military years. The boxes they treasure are filled with epaulets, collar buttons, cap badges from their uniforms, medals they won and old photos slightly yellowed through time.

Xu Jiaping is now a contract employee with a city administration bureau and Xu Jian, before he retired, worked for the judicial system. Grandfather Xu Zhiwen received a monthly pension and lived peacefully with his wife.

“I did somehow feel maladjusted when I left the army and entered society again. But life in the camp taught me to be a resolute man and that helped when I entered society,” said Xu Jiaping. 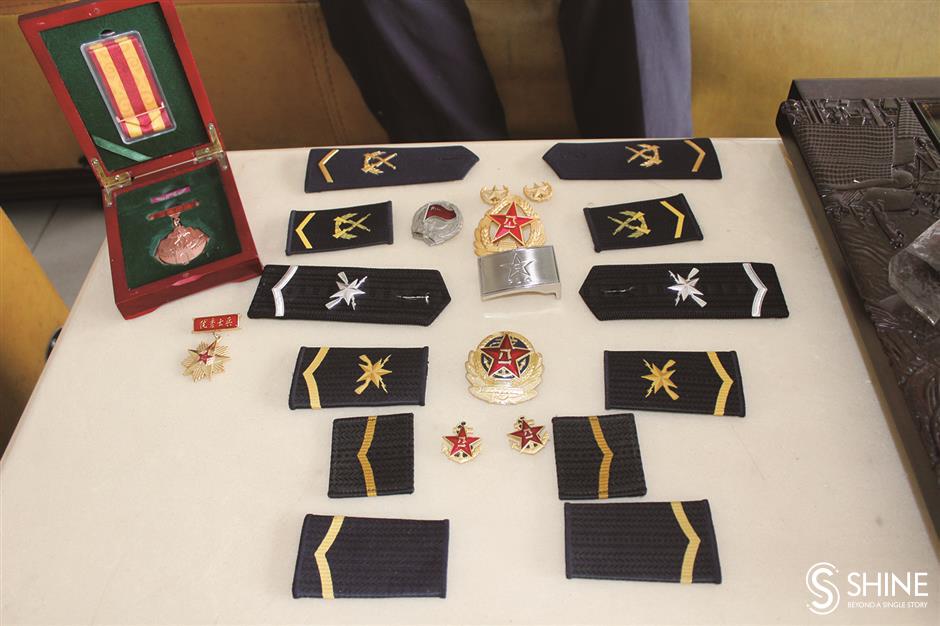 Xu Jiaping’s epaulets, collar buttons and cap badges along with the medals during his military service, are presented.

Special Reports
ADVERTISEMENT
61910
,
61763
,
Guide for overseas Chinese students during COVID-19 pandemic
A cemetery that celebrates life and death
Nile threatened by waste, warming, dam
Enchanting abode in idyllic tranquility
Connecting nature, culture and people with design
Fancy footwork: An embroiderer finds her niche
How overseas Shanghainese go through outbreak
Counseling eases psychological toll of outbreak
'Support troops' guard the doors to the city
A guardian of the light ... and of hope for Wuhan
EXPLORE SHINE