Opening up about death with total strangers

The subject of death can elicit feelings of terror, foreboding, despair and sadness, but for some coming to grips with death helps make the most of life.

Wei Wei thinks birthdays are a perfect opportunity for us to celebrate the gift of life.

“I want my bestie to paint my lips and do my makeup,” she said. “All my relatives and friends dress colorfully. They read poems to me and then drink a little. I also want my funeral to be a party.”

Two years ago, Wei opened a notepad on her cellphone and wrote a will in a hotel room in Luoding, Guangdong Province. The next day, she would jump out of an airplane from a height of 4,000 meters.

The experience of parachuting was a gift Wei gave to herself to celebrate her 30th birthday. 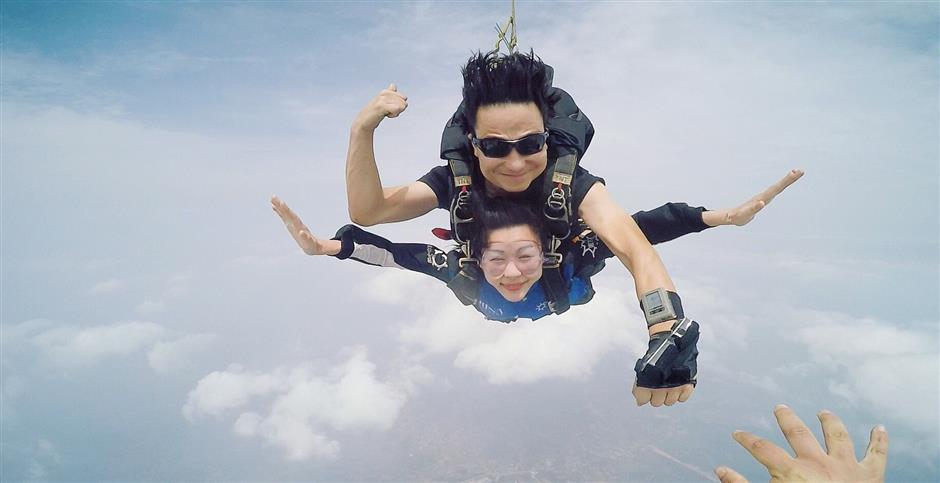 Wei Wei made her first time skydiving with her instructor in Luoding in 2018.

A native of Wuhan, Wei earned a master’s degree from Hong Kong Polytechnic University then settled down with her husband in Hong Kong. Although life was good, there were times she grew bored, unhappy and burnt out. So in April of 2018, she decided to take a 5-hour bus trip to a parachuting site in Luoding, which she insisted making by herself.

Back from parachuting, Wei quit her job, seized the opportunity to move her family to Shanghai and joined a project in 2019 to open a bookstore on Nanjing Road E.

Last year a friend approached her asking if she could provide a space for a Death Cafe event, and she agreed. When someone failed to turn up on the day the event was held, she naturally filled in the slot of discussing about her parachuting experience.

“At that time, I was not satisfied with the routine of my life, so I took the chance to make a change,” the 31-year-old shared her story with 19 strangers on site. “When it was time to jump, I was frightened and realized I could die were there an accident. My life was not under my control. It wasn’t until the parachute opened that I felt safe and began to enjoy the flight. Looking at Earth from above, I suddenly realized how small I am. For a moment I wasn’t afraid of anything. I could even accept if I had died in such a way.” 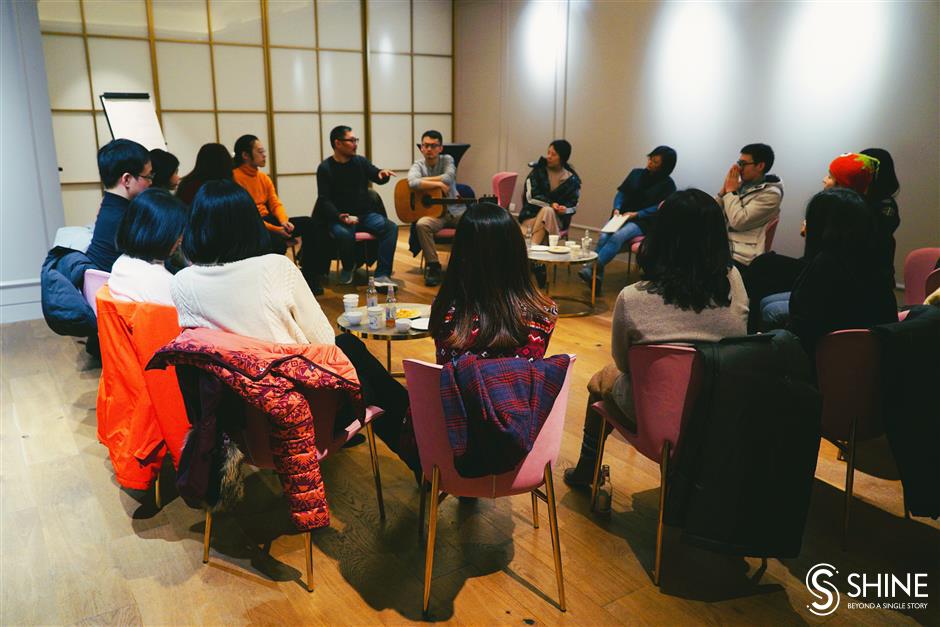 In Death Cafe, people, often strangers, gather to eat cake, drink tea and discuss death “to increase awareness of death with a view to helping people make the most of their (finite) lives,” reads the introduction on the group’s official website.

All told, 11,200 Death Cafes have taken place in 73 countries, including more than 100 discussions in Shanghai.

According to Wang, Death Cafe Shanghai debuted as an inner-sharing gathering on life-and-death education.

In the name of encouraging more open discussions about death, Death Cafe has been open to the public since 2018 and is regularly held at different venues across the city. Even during the coronavirus outbreak when public gatherings were largely prohibited, online discussions still took place.

“I feel that talking about death is no longer a taboo,” said Wang. “Actually, many people are willing to share their thoughts on death if it’s in a confidential space like Death Cafe. Most participants range in age from 20 to 50, and 60 to 70 percent of them are female.” 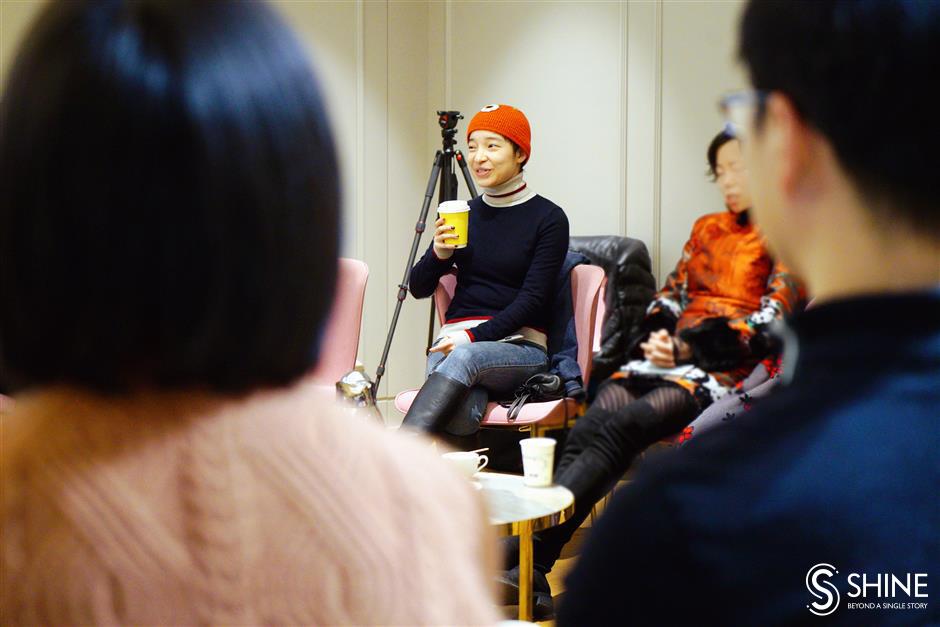 Bai Jiaxin at a Death Cafe discussion in Shanghai

Each Death Cafe gathering selects one or two hosts whose job is to set the pace, make sure every participant gets the chance to talk and maintain a respectful and safe environment without any criticism or arguments. Bai Jiaxin, who has a history of monitoring death experience halls in the Shanghai, is usually a host.

In fact, since 2018 Bai has been a Death Cafe host dozens of times. She likes Death Cafe because it helps relax the taboo that surrounds talking about death, and “it’s an open-end discussion that provides a way to express thoughts about one’s own fears and problems in life.”

Sometimes Bai takes part in the free discussion, drawing from her own experience as a participant. Any topic is acceptable, she said.

She recalled the first time she confessed to her mother she might love someone regardless of their gender, and that she had no desire to get married. She then cried.

“I tried to commit suicide but failed,” Bai said. “After that near-death experience, I feel life is much more precious. I cherish every moment I spend with my friends, and I want to make people around me happy.”

I don not judge things one way or the other; either will be okay in the end.

Born in 1994 in Taiyuan, Shanxi Province, Bai went to college in Shanghai. The year she graduated, she received several job offers but didn’t know what to do.

One summer day, she walked into a pavilion called “Samadhi: 4D Experience of Death” in a small park in Huangpu District with the hope of finding a sense of meaning in life. Samadhi is an ancient Sanskrit word referring to the development of a luminous, equanimous, mindful self.

Unexpectedly, the experience was a turning point in Bai’s life. She was hired by Ding Rui, the founder of “Samadhi,” and became the monitor until it closed last year after having sent more than 7,000 people to “a simulation of being cremated” in three years.

Bai became famous under the nom de guerre “San Qi” (an herb used in traditional Chinese medicine), a nickname she gave herself in college. She was amazed by the contradictory functions of the San Qi herb — it can be used to stop bleeding and remove blood stasis, invigorating it in the process, according to “Ben Cao Gang Mu” (“Compendium of Materia Medica”) by renowned 16th-century medical scholar Li Shizhen.

Observing people with many different reactions to death has given Bai a deeper understanding of what death is.

“I feel more open-minded and flexible than ever,” she said. “I don’t judge things one way or the other; either will be okay in the end.” 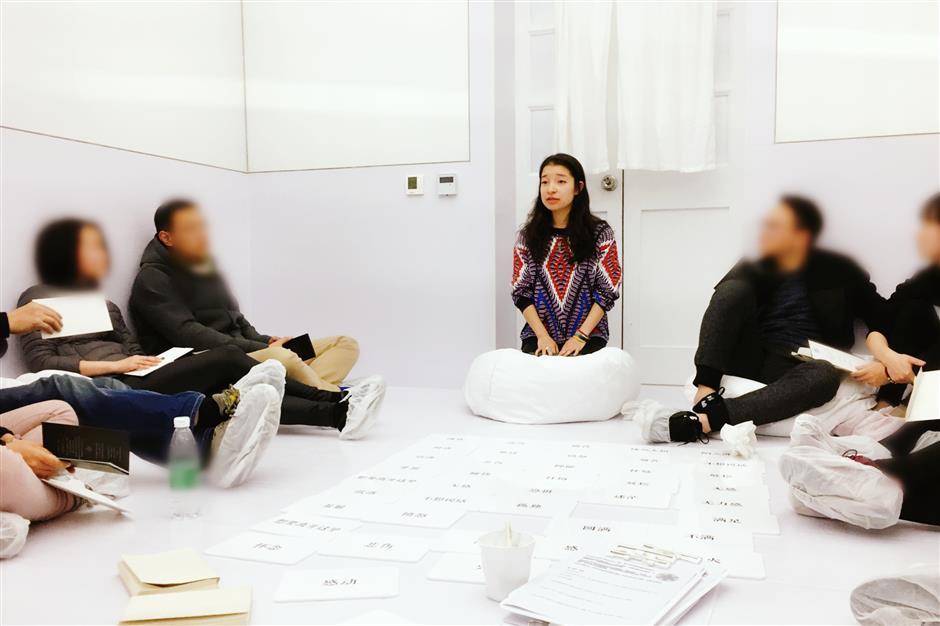 Bai shares views with participants in the death experience pavillion in Shanghai.

Recently, the finance major joined a clothing shop that helps her friends sell self-designed clothes for women despite not knowing anything about making clothes.

More than 50-million people in China suffer from depression, and 41 million suffer from anxiety disorders, according to a World Health Organization study in 2019. Some 700 Chinese take their own lives every day, while more than 6,000 attempt to do so.

What would you do if you feel depressed or at a loss? Find a friend, listen to music or go to sleep? Maybe Death Cafe is a new option.

For the moment, Bai is training more Death Cafe hosts, and she looks forward to more gatherings in the city. She believes providing an empathetic ear can make a big difference in how we see the world.