A River of History and Culture
Shot by Ma Xuefeng. Edited by Ma Xuefeng and Zhong Youyang. Subtitles by Yang Yang.

With its 42-kilometer-long banks, furnished with well-connected pedestrian paths, Suzhou Creek is the latest hottest attraction in the metropolis.

As a cradle of modern homegrown industries in the 1920s, Suzhou Creek isn’t only a place for a walk, it has been a transportation artery for more than half a century.

The warehouses and bridges on the river expanded the city’s modern industries, before they were renovated into museums or art places. They open a window to past stories of the city and the river. 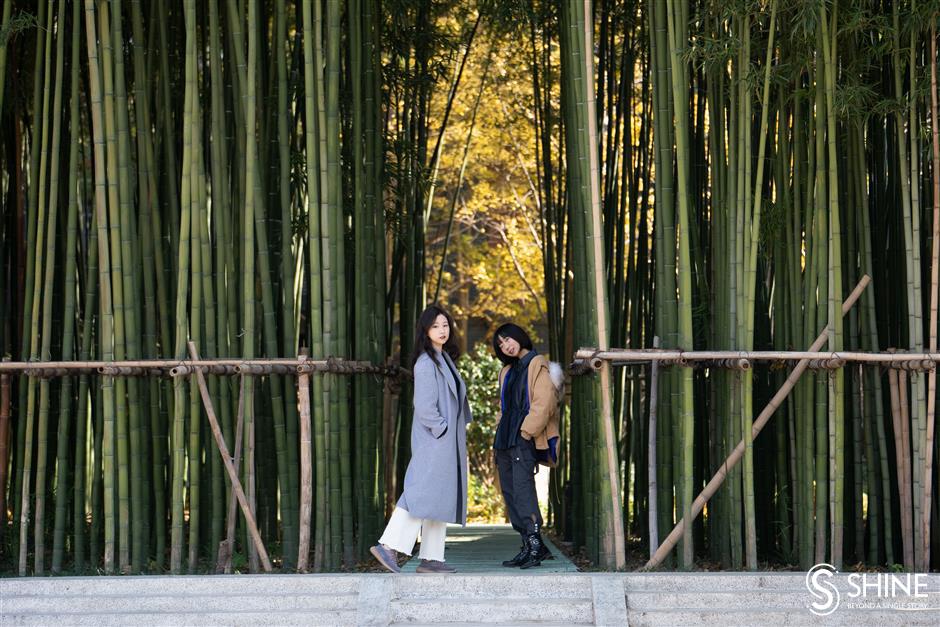 Our exploration started at Jiu Zi Park, on the border between Jing’an and Huangpu districts. It used to be two paper mills before 1949, but was turned into a park in 2006 as part of a Suzhou Creek renovation project.

The park has been renewed with a beautiful waterfront and a small bamboo forest. Red maple trees have been planted to add a splash of color to the creek.

The name of the park came from the “nine games” that used to be played in Shanghai longtang (alleyways) of the shikumen (stone-gate) houses in the 1960s, which brings back golden memories for the city’s elder generation. Boys rolling iron hoops, girls kicking shuttlecocks or playing marbles, the nine sculptures, made of bronze, steel and granite, are a reminder of these old games. For the young generation the old games may be far from our daily life, but they are still interesting.

Every autumn, there will be a Jiu Zi competition in the park, welcoming people to take part in the nine games. 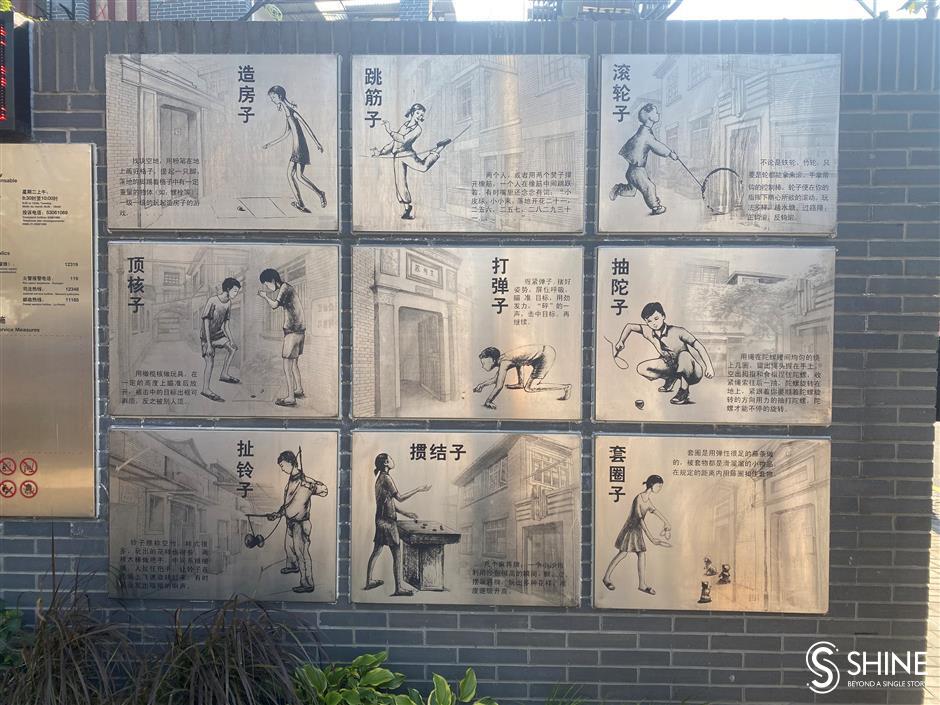 Notices on a wall showing a variety of traditional Chinese games

About five minutes from Jiu Zi Park, along Suzhou Creek, we found a historic wood-brick structure on the south bank.

It was a famous warehouse 100 years ago, formerly the Imperial Bank of China’s second store house, which was built in 1908.

In June 1936, Du Yuesheng, then a rogue tycoon of Shanghai, was elected president and general manager of the bank and the building became his private granary.

Today the building still keeps its original look and only 48 days were taken to complete the renovation project. The wooden beams, cement layers, transom window and words of warning on the wall still remain.

Walking on the steps, old photos on the wall display Suzhou Creek and the granary’s golden era — cargo jams on the creek, Du Yuesheng and his friends, the foreign soldiers on the bridge, and the old picture of the building.

Now the building is a venue for exhibitions, and the latest one is a graffiti-art exhibit “Dialogue with the Stars,” telling a story of an astronaut teenager and the stars.

By the way, we met lots of Shanghai aunties wearing qipao there, and they were glad to take photos with all the visitors. Fiona Li (center) in the inside of the 1908 Granary, formerly Du Yuesheng’s private granary in 1930s

Xizang Road Bridge is famous for the “The Eight Hundred” movie and the Battle of Shanghai.

In the movie, set in 1937, one side of the river was a battlefield while the other side was a place of luxury — the bridge connected war and peace.

Today the bridge is not the original one, which was only 18 meters wide in the movie. In 2002, Shanghai government decided to demolish the old bridge and build a new one at the original site.

The decoration of the new bridge still retains its original style and contains modern elements, but also reminds the people of Shanghai of its history. 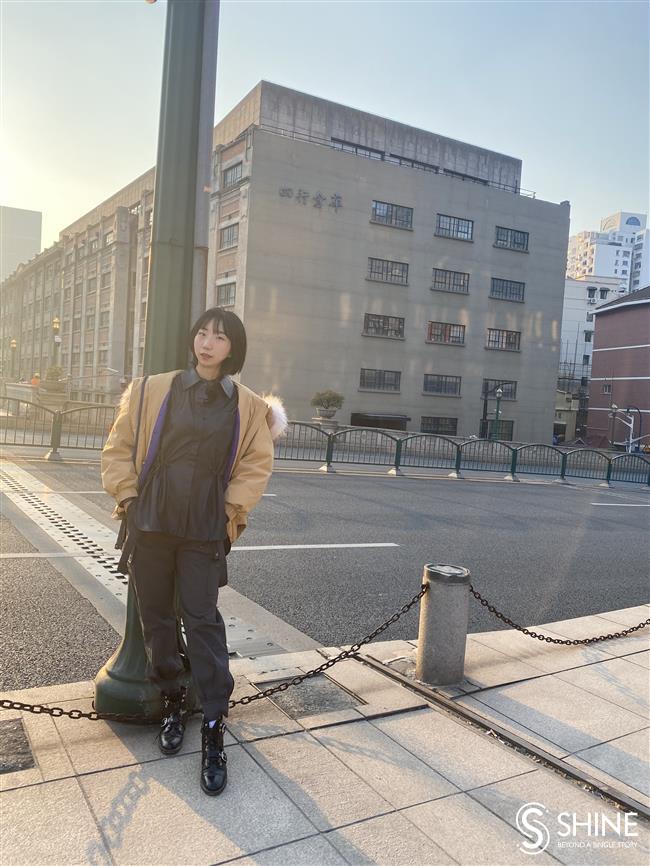 Yan Qing Li — the only English-style warehouse in Shanghai

Along Suzhou Creek, Yan Qing Li is the only English-style warehouse in Shanghai with three layers of gray tiles. The wall is made of blue and red bricks, with a partial cement finish and rows of arched windows.

It’s hard not to notice it, because of the shikumen-style gate. The warehouse was in a historic shikumen complex, sharing the same name. The warehouse was renovated into the Bailian Group Fashion Center in 2018 and became a prime location of local designer brands.

The atrium reopened as the main entrance of the building and the shikumen alley is free for visitors. On the top floor, we found a stunning view of the city through the window and could see the new skyline and the historic shikumen houses. 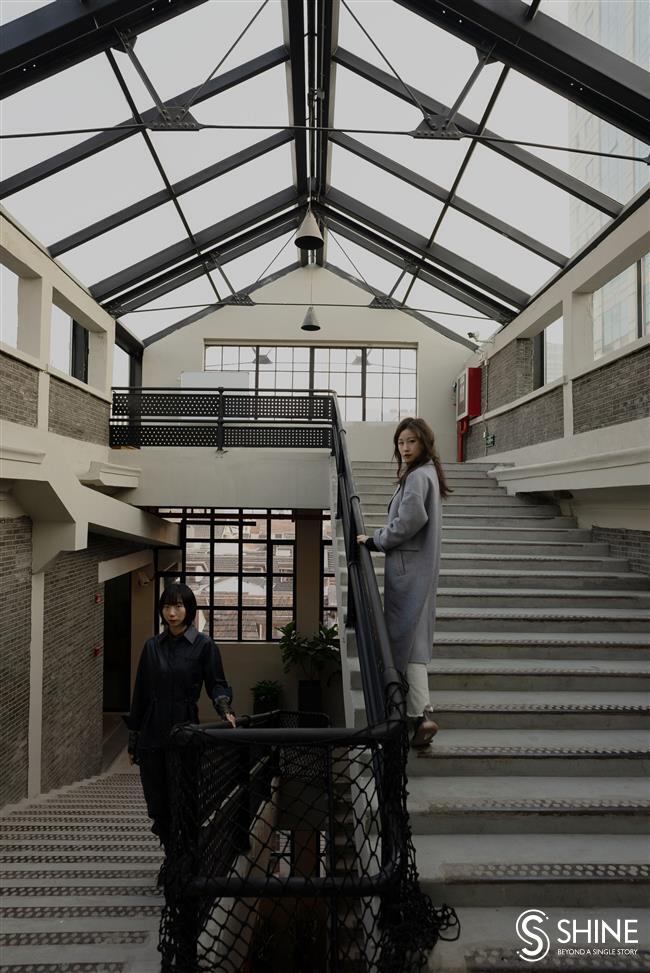 Sihang Warehouse — a famous site during the Battle of Shanghai

Across the Xizang Road Bridge, Sihang Warehouse came into our sight. During the Battle of Shanghai, Sihang Warehouse was the last stand for Chinese forces against the Japanese invaders and one of the bloodiest episodes of the city’s wartime history.

On October 26, 1937, Lieutenant Colonel Xie Jinyuan was ordered to lead his battalion of more than 420 officers and men to fall back to the warehouse to buy time for the full retreat of the army and to win international support by showing China’s determination to fight against Japanese invaders.

Xie falsely claimed he had 800 men, seeking to confuse and frighten the enemy. That’s why the defense force came to be called “The Eight Hundred.”

The name “Sihang” means four banks, which comes from the fact that the building was co-financed by four banks. Once a furniture warehouse and office, it was turned into Sihang Warehouse Battle Memorial Museum in 2015.

The memorial provides a detailed insight into the battle, with photographs, maps, recollections, miniatures and life-sized wax models showing what life was like for those defending Shanghai.

Stand among bronze statues of soldiers and listen to Xie “talking,” you may know more about the battle and the warehouse at that time.

Today, artists have restored the battle-scarred west wall of the warehouse based on the historical footage, on which the names of “The Eight Hundred” are inscribed. 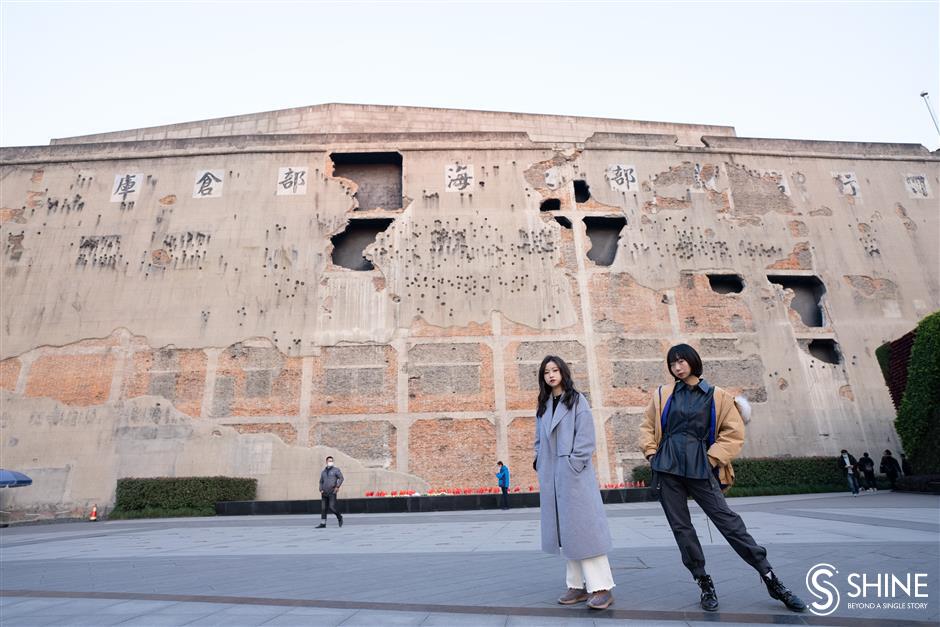 Fiona and Shirlene in front of the Sihang Warehouse 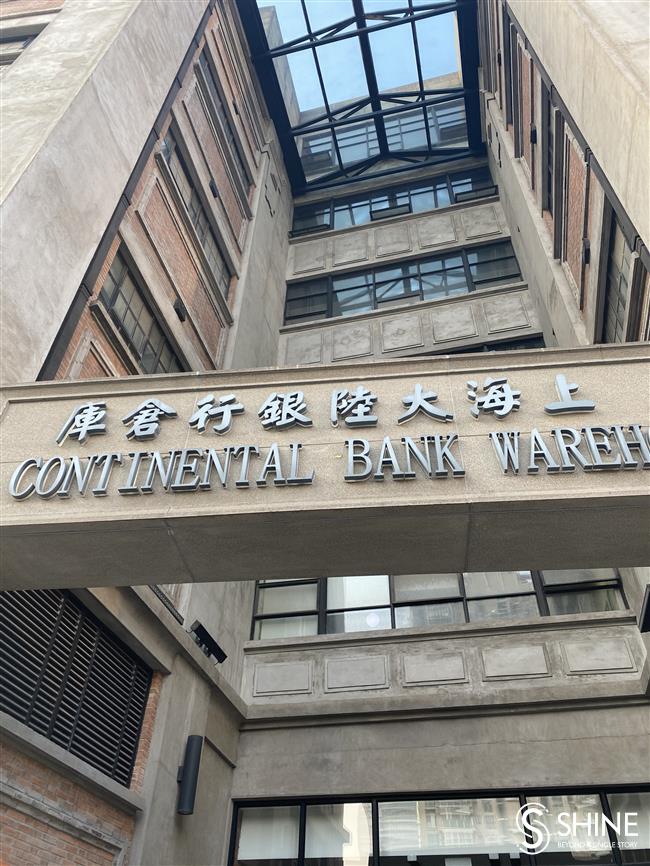 Sihang Warehouse used to be co-financed by four banks. 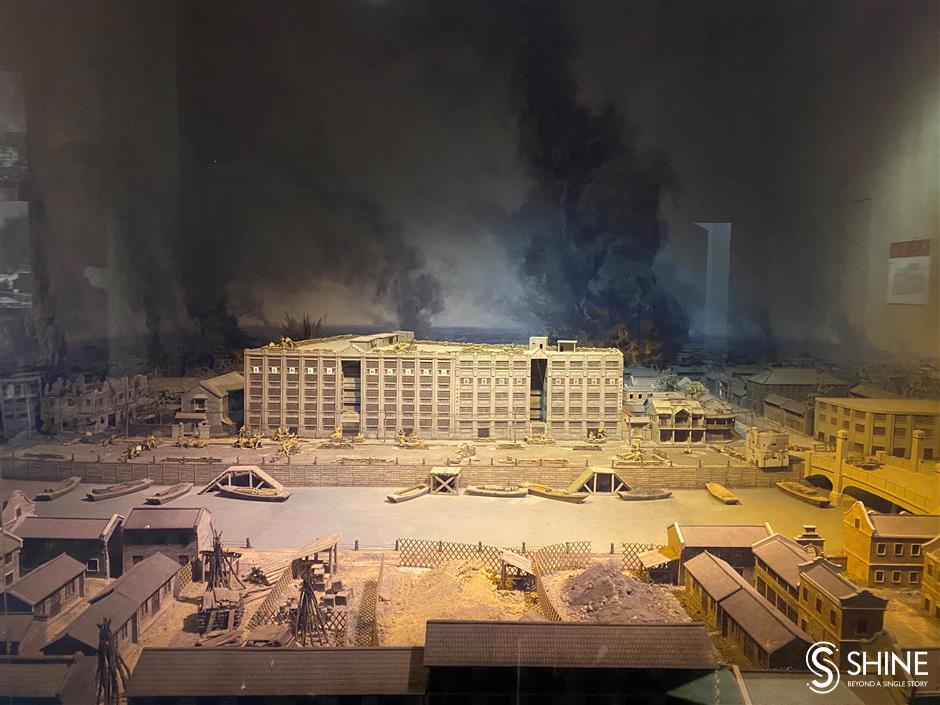 Miniatures show when Sihang Warehouse was a battlefield in 1937.

Completed in 1908, with trams running on it, the bridge was a main artery over the creek a century ago. It was featured in street scenes of Shanghai in the movie “Empire of the Sun,” and the TV drama “Romance in the Rain.”

Today, the bridge is still busy with traffic, offering a great view along the newly completed riverside pedestrian paths, attracting tourists with its iconic structure. 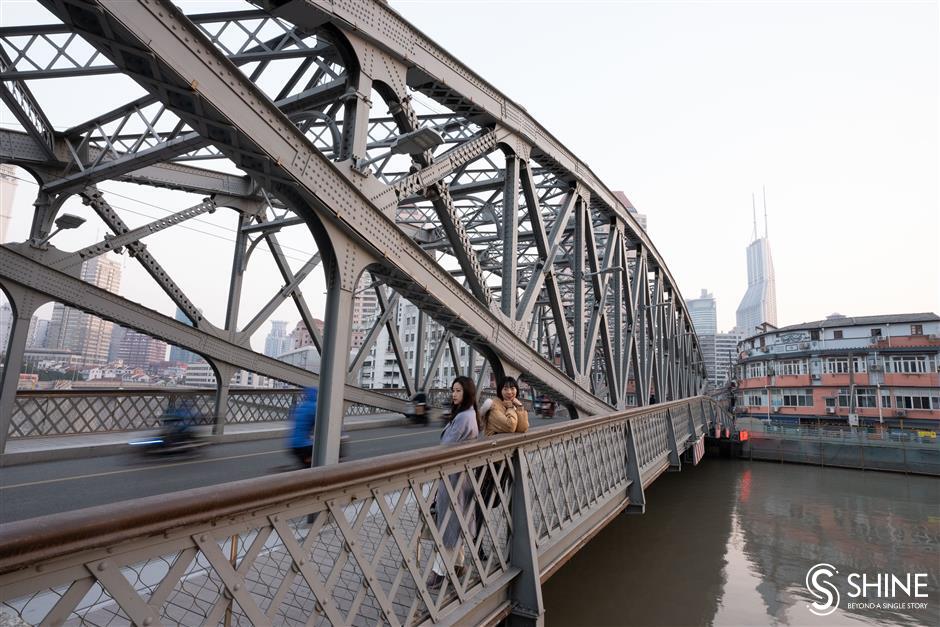 Fiona and Shirlene on the Zhejiang Road Bridge