During the 1950s, the photo studio was popular with local celebrities like film stars Bai Yang and Zhao Dan, artists Liu Haisu and Zhu Qizhan and popular writer Ba Jin. In the 1980s, the Renmin Studio introduced a new approach to studio portraits, becoming the most popular photo studio in the city, especially for weddings and family pictures. 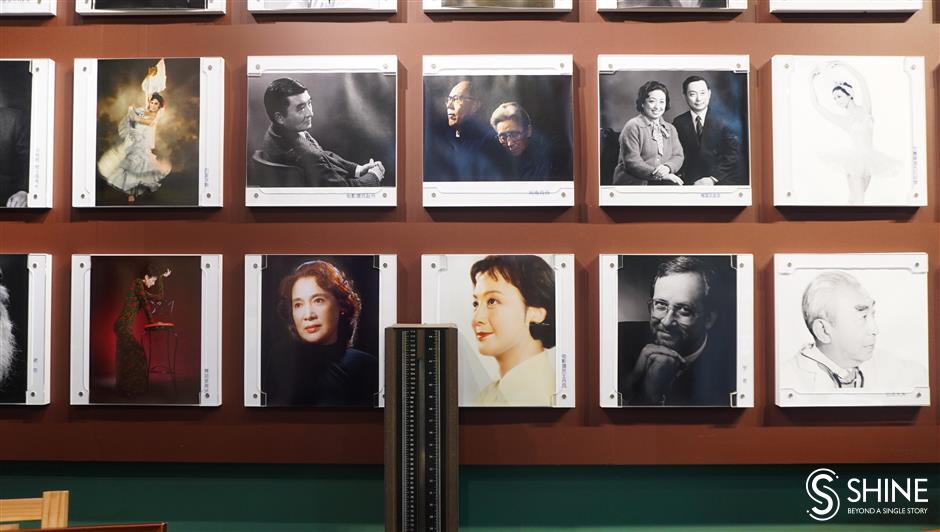 A small exhibition on the first floor features old photos of local celebrities.

The studio on Hefei Road displays its history with a small exhibition on the first floor, featuring old photos of local celebrities between 1930 and 1980, as well as photographic equipment used by the Shanghai New People over the past 80 years.

Fiona Li poses in front of the Renmin Photo Studio.

When I visited the studio, I was impressed by the photos hanging on the walls — using great lighting and shadows to create a perfect portrait without Photoshop. What’s more, people can take the same kind of photos for 180 yuan (US$27.71).

I was shown a sample black-and-white photo with the studio’s steel seal and flower-shaped margin.

Makeup and styling services are available for 300 yuan, an important touch for vintage photos.

“Makeup styles in photo studios are always changing,” said Feng Ming, the studio’s stylist, who has worked here since the 1980s. “The most popular makeup in the 1980s was similar to the 1940s — large-size blush, red lips, long eyebrows and smoky eyes. Recently, this vintage makeup style has become popular again.”

She made a 1940s finger wave updo for me with a meshed wig, rarely seen in new salons but quite popular with Shanghai celebrities in the 1930s. 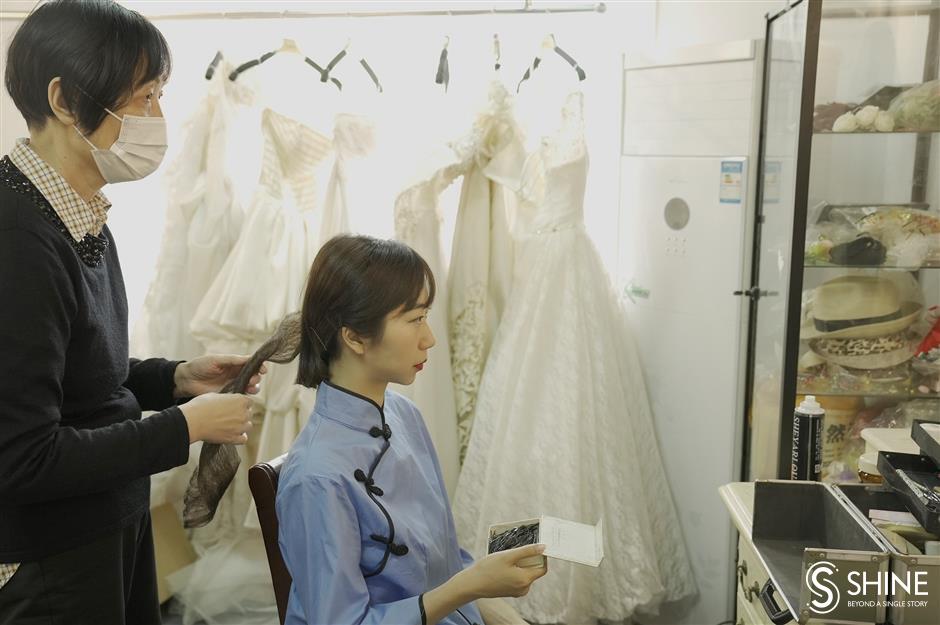 Taking a picture here is a bit different from what is in other photo studios. There are two photographers with an assistant holding the cameras, while the chief guides the poses and changes the lighting — a traditional way of taking studio photos before the digital era.

“Back in the day, photos were priced based on the number of negatives,” said Huang Mohua, the studio’s 63-year-old chief photographer, who took photos for me. “The photos cannot be seen while they’re being taken, so photographers must make sure every picture is well taken.”

“I’ve been a photographer for 42 years, and my first job was at Dielai (literally “butterfly is coming”) Photo Studio, named after Hu Die (also known by her English name Butterfly Wu) who was one of the most popular Chinese actresses during the 1920s and 1930s and always had her pictures taken at Dielai,” Huang added. “Dielai and another local photo studio Dongfang merged with Renmin Photo Studio decades ago to become Shanghai New People’s Photography Company, and I have worked here ever since.”

Renmin Photo Studio has many stories in its long history.

The studio was opened by a Russian businessman at 144 Route Vallon (now Nanchang Road) in 1940, moving to 131 Route Cardinal Mercier (Maoming Road) in 1947. Just before the founding of the People’s Republic of China in 1949, the studio was bought by a Chinese employee Gu Yunming and renamed Qiaoshi Photograph Company. Gu Yunxing, the studio owner’s younger brother, was a major figure in the company, joining Qiaoshi after graduating from university to learn about photography and business. 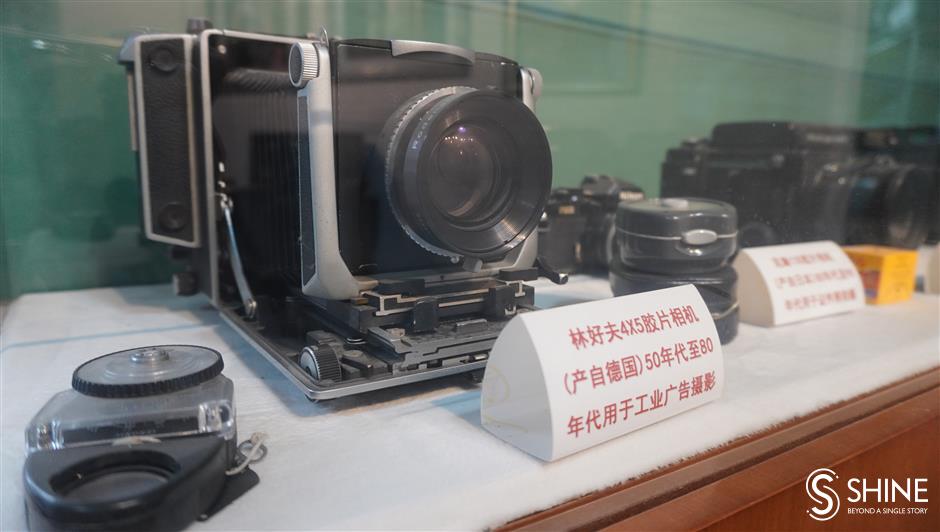 Old cameras once used at the studio are displayed in a cabinet. 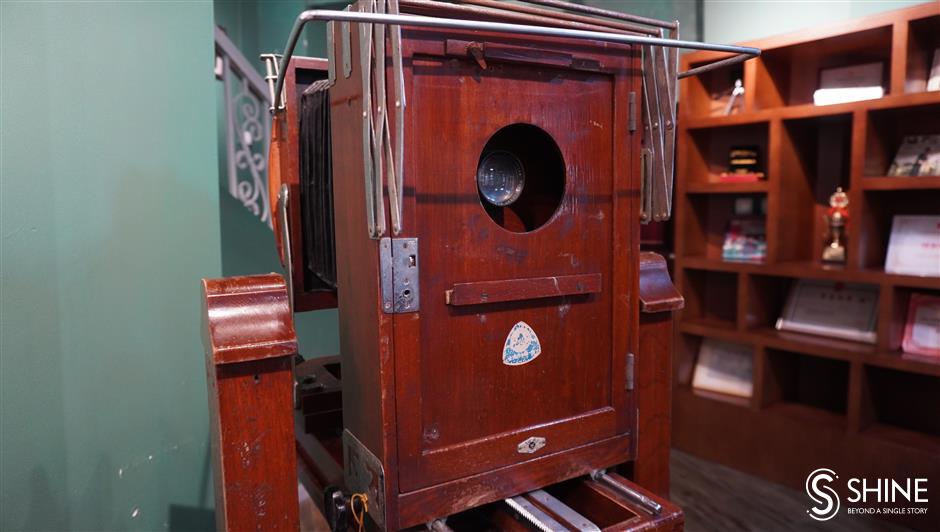 One of the old cameras exhibited at the studio

With a good command of English, French and Russian, Gu Yunxing was a Chinese businessman who blended art, culture and painting into photography. In the 1950s, he blended classic Western oil-painting styles into his photographic portraits, and created a signature portrait photograph style.

On the National Day in 1959, the studio changed its name to Renmin Photo Studio.

Gu Yunxing’s photo styles were handed down. According to Huang, to present a perfectly balanced portrait, lighting is very important. Renmin’s signature portrait photograph styles are high-key and low-key. High-key photos are mostly light, while low-key photos are in high contrast. By letting in too much light or restricting more light than usual, different moods within a scene can be created.

These different lighting styles provide a series of different looks with the same white background.

Photos from the studio take a week to process — printed on vintage matte photographic paper with the studio’s steel seal and flower-shaped margin. The photo packaging has never changed — white with four red Chinese characters that say “Renmin Sheying (人民摄影).”

Due to a government relocation project, the time-honored photo studio on Hefei Road may have to move in the next six months. It is a limited-time experience to have a vintage portrait taken in the historical three-story building.

Li shows the vintage photo she takes at the studio.