Fiona Li experiences the thrill of metaverse at the DoBe E-Manor of Baihang in Shanghai.

Put on a pair of virtual reality glasses and the real world turns virtual. That's a scene from the science fiction action adventure "Ready Player One" that is available in Shanghai now.

It is the technology of the metaverse which became the buzzword of 2021 and is gaining in popularity.

Regarded as the next iteration of the Internet, the metaverse is where the physical and digital worlds come together. Human profiles are represented as avatars, which is indeed an extension of something like the real world. In the metaverse, office spaces, property and events are all mirrored.

Last month, China's first metaverse creative office park was launched in Shanghai by Dobe, an office service provider for the development of cultural and technological enterprises.

Renovated as a creative office park in 2013, it has now been upgraded to the metaverse.

According to Dobe, with the help of EasyAR's digital capture technology, visitors can explore the virtual scenario using mobile phones and VR glasses via the app "wehome."

It is an integration of digital media and real-life scenes. Through the camera, the virtual scenes will appear in the real world.

Log in to the app, and you'll step into the metaverse.

There are signs that will guide you to the office park, as well as virtual scenes in the real world, such as cartoon figures, fireworks and colored ribbons.

The logos and introductions of the companies in the office park pop up in the air when one reaches the venue.

What's inside the office park?

In the real world, there are some old office buildings and crowded parking spaces.

But in the metaverse, you will see a blooming cherry tree and a huge kunpeng (a magical beast that looks like a hybrid of fish and birds in Chinese myths), as well as an airship floating around the kunpeng. 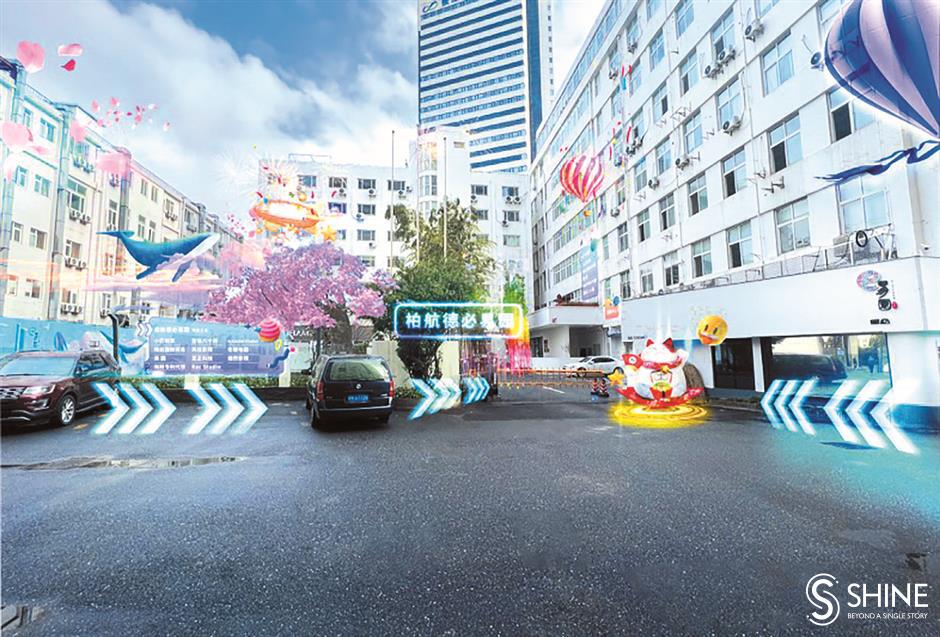 In the metaverse, you will see a blooming cherry tree and a huge kunpeng, as well as an airship. 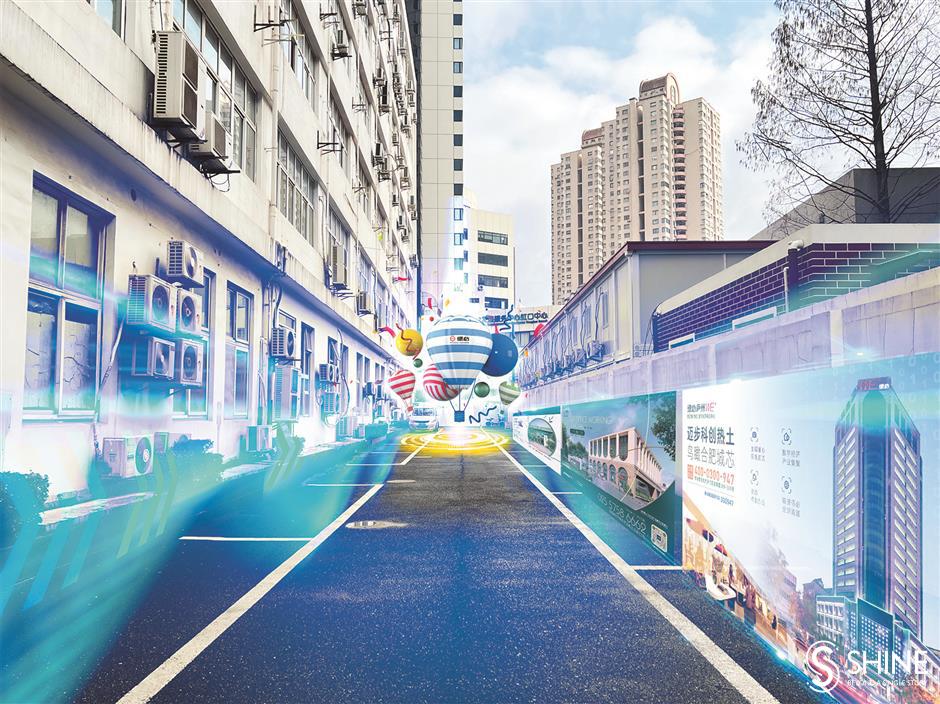 The virtual scenario as seen on the app "wehome"

These are all dynamic and in 3D shapes – when you get close, you can look at them from different angles as if they were real.

When you are wandering through the narrow alleys in the office park, a virtual runway pops up.

The walls on one side turn into large billboards and forward arrows appear with a heap of cartoon figures, just like stepping into a VR running game.

The companies in the park can advertise on these virtual billboards, with no construction cost and can update them at any time, according to Dobe.

In the near future, the metaverse office scenario will be upgraded into a 2.0 version in which the virtual world will have more practical functions and be more interactive.

Online meetings in a virtual meeting room might be available via the 2.0 version. In the metaverse, with just a click, your avatar will appear in the virtual office at any time.

It is no longer impossible to work in the office and have meetings during quarantine in the metaverse office.

Your office hours will not be boring either. The virtual trees and decorations will be updated every season.

"There will be a cherry tree in spring, maybe it will transform into an apple tree in summer ... the possibilities are endless in the metaverse," said a staff of Dobe.

In the near future, the metaverse community will be launched with a bunch of immersive games. You'll be able to put a "wish card" on the blooming tree, get a virtual pet, build a home for it and feed it every day.

Compared to online games, the metaverse community is based on the real one. All the players are the ones working in the same office park. It's fun to meet new friends via a virtual treasure hunting game in a real location.

The metaverse service will be gradually improved and launched in Dobe's other office parks.