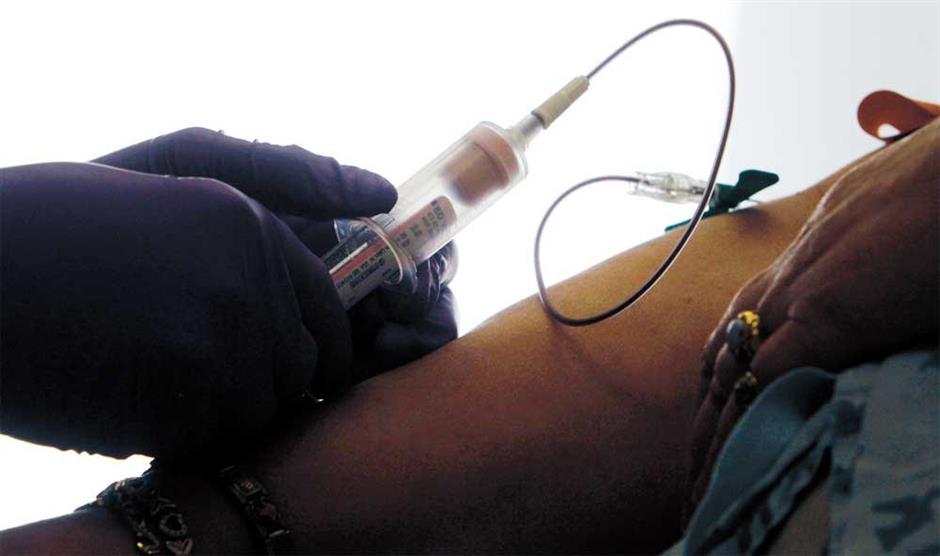 Patient Carole Linderman has her blood drawn for a liquid biopsy, during an appointment at Jefferson University Hospital in Philadelphia. Many studies suggest that liquid biopsy results largely mirror those from tissue ones.

SCIENTISTS have discovered major evidence that blood tests called liquid biopsies show promise for screening people from cancer. Hong Kong doctors tested it for a type of head and neck cancer, and boosted early detection and one measure of survival.

The analysis detected DNA that tumors shed into the blood. Some are now used to monitor cancer patients, and many companies are trying to develop versions of these for screening as possible alternatives to mammograms, colonoscopies and other such tests. The new study reveals this approach can work, at least for this one form of cancer and in a country where it is common.

“This work is very exciting on the larger scale because it gives a blueprint for how to make tests for other tumor types such as lung or breast,” said Dr Dennis Lo of Chinese University of Hong Kong. “We are brick by brick putting that technology into place.”

He led the study, published early this month by the New England Journal of Medicine.

Lo is best known for discovering that fetal DNA can be found in a mother’s blood, which launched a new era of non-invasive testing for pregnant women.

The study involved nasopharyngeal cancer, which forms at the top of the throat behind the nose. It’s a good test case for DNA screening because it’s an aggressive cancer where early detection matters a lot, and screening could be tried in a population where cancer is most common — middle-aged Chinese men.

Also, the Epstein-Barr virus is involved in most cases, so tests could hunt for viral DNA that tumors shed into the blood in large quantities, rather than rare bits of cancer cells themselves.

More cases were found at the earliest stage — 71 percent versus only 20 percent of a comparison group of men who had been treated for nasopharyngeal cancer over the previous five years.

That’s important because early cases are often cured with radiation alone, but more advanced ones need chemotherapy and treatment is less successful.

Screening also seemed to improve how many survived without worsening the disease — 97 percent at three years versus 70 percent of the comparison group.

Only one person who tested negative on screening developed nasopharyngeal cancer within a year.

The researchers estimated that 593 people would need to be screened at a total cost of US$28,600 to identify one cancer case. It may be worth it in Hong Kong, but maybe not in places like the US where the disease is rare, and more people would have to be screened at a greater cost to find each case, said Dr Richard Ambinder of Johns Hopkins School of Medicine, who wrote a commentary in the journal.

Still, “this is showing that liquid biopsies have great promise,” he said. “This is an advance that will indeed save lives.”

The study was sponsored by an Asian foundation and the Hong Kong government. Lo and some other authors founded Cirina, a Hong Kong-based company focused on early cancer detection, and get royalties related to DNA blood tests.

In May, Cirina merged with Grail Inc, a California company working on cancer screening blood tests with more than US$1 billion from drug companies and big-name investors such as Jeff Bezos and Bill Gates.