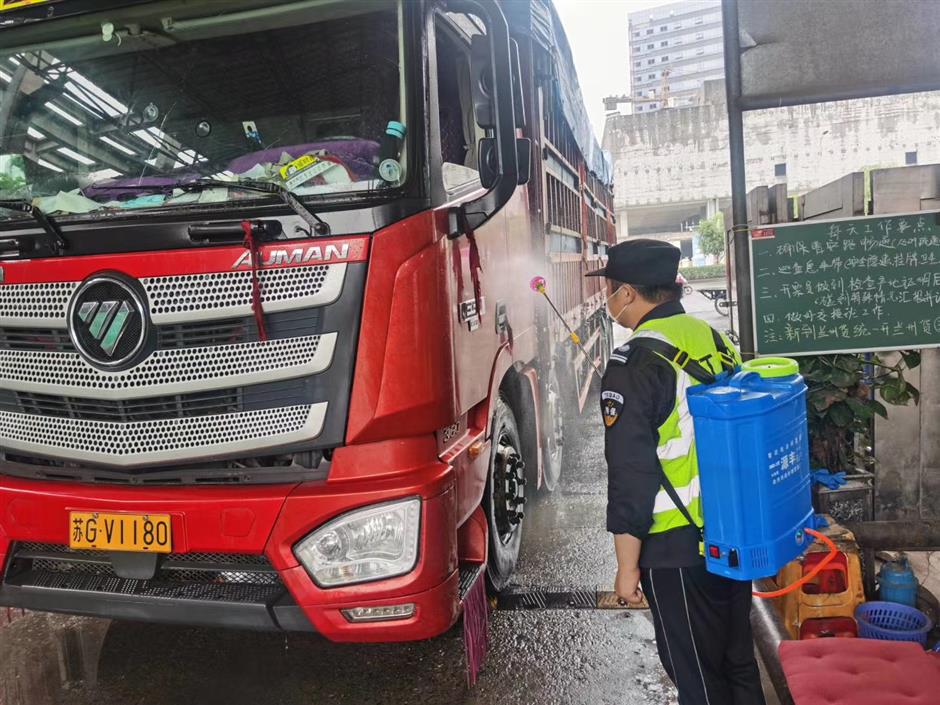 All vehicles entering Jiangqiao Market in Jiading District are disinfected every day.

Shanghai authorities have tightened monitoring of the city’s vegetable, meat and seafood markets after a cluster of novel coronavirus cases in Beijing was traced to the capital’s largest wholesale market.

Once again, markets have returned to the spotlight of concern over the risk of coronavirus resurgence and public health and hygiene standards.

Chinese authorities reported that more than 240 people in Beijing have thus far tested positive for the virus from a cluster believed to have originated from chopping boards used to handle imported salmon at the massive Xinfadi market, which supplies more than 70 percent of the capital’s fresh produce.

Most of the COVID-19 patients at the market worked at seafood stalls, followed by beef and mutton sections, according to Wu Zunyou, chief epidemiologist at the Chinese Centre for Disease Control and Prevention.

Imports of foreign salmon have been halted. Over the weekend, Chinese authorities also banned imports of poultry from US and British suppliers, and pork from a German processor, citing clusters of infections among workers in the plants of the three companies. In addition, a Beijing snacks factory of Pepsico was closed after eight new cases were found there.

Do Shanghai residents have reason to worry about their city’s food supplies? Authorities are taking no chances.

Some 87 markets across the city where imported food is sold have been checked. Of 1,205 samples taken, all tested negative for the virus, Wu Jinglei, director of Shanghai’s Health Commission, said last week.

However, Sun Xiaodong, deputy director of the Shanghai Center for Disease Control and Prevention, advised residents to eat cooked rather than raw food.

Zhu Yi, deputy director of the city’s commerce commission, outlined a plan for local farmers’ markets, specifying that they should be disinfected regularly with testing conducted on all fresh food sold there, especially meat and seafood.

Particular attention is focused on worktops, trash cans, sewers, toilets, passageways, elevators and transport vehicles. Ventilation of market trading areas must be well maintained, and equipment such as exhaust fans must be turned on to increase air circulation.

The market watchdog will check the sources of ingredients and products as vendors replenish their stocks, Zhu said.

In addition, people traveling to Shanghai from high-risk areas will be required to undergo 14-day quarantine and given two coronavirus tests, Wu said. Temperature screening at local airports and railway stations will continue.

The two markets do not have seafood trading, according to Sun Yanmin, deputy Party secretary of both markets.

But alarmed by the epidemic outbreak in Beijing, Xijiao International is requiring meat traders to step up disinfection of all surfaces and tools that come into contact with raw meat, Sun told Shanghai Daily.

From June 16 to 23, the group dispatched 10 inspection teams to check all the markets it owns. A special team has been monitoring the health status of all employees and vegetable traders, ensuring that body temperatures are taken daily and facial masks are worn at all times.

Testing of all products entering the market has also been increased. All trucks have to pass through disinfection, and sanitizing market areas has been expanded.

Gu Zhengbin, 52, manager of the Jiangqiao Wholesale Market and a vice president of Shanghai Vegetable Group, said Shanghai residents have no reason to worry about ample food supplies in the city.

He is no stranger to that promise. The Jiangqiao market has been a critical link in Shanghai’s food distribution since the start of the coronavirus outbreak six months ago. 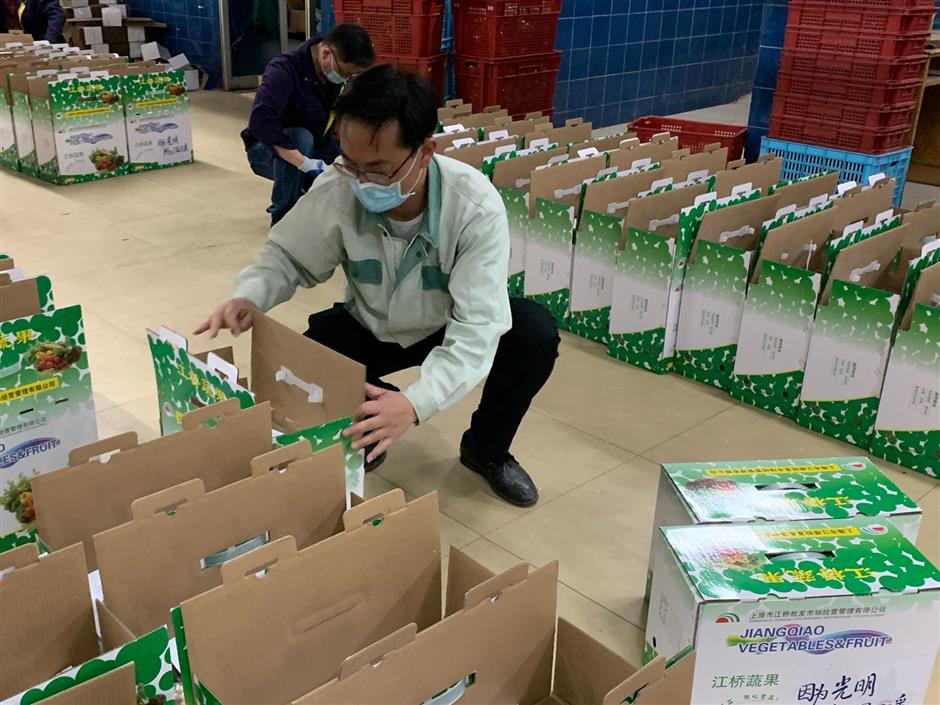 Gu Zhengbin, manager of Jiangqiao market, is cited for his work early in the epidemic. He kept vegetable supplies stable and sent boxes of vegetables to families of medical workers dispatched to Wuhan hospitals.

Indeed, it’s a giant operation, supplying the city with an average 6,000 tons of Chinese cabbage, beans, tomatoes, garlic and other vegetables each day. The produce comes from local farms and from more far-flung growers across the country.

Gu won a government citation for his work maintaining stable vegetable supplies in Shanghai in the initial months of the public battle against coronavirus. His efforts were particularly noteworthy because of the widespread disruption to the normal supply chain between farmgate and dinner tables.

The epidemic became a serious health problem during the annual Spring Festival holiday in January. The Lunar New Year period, traditionally a time when migrants and some residents of Shanghai return to hometowns across China, is typically an off-season for the vegetable trade.

“Normally, less than 400 tons of vegetables, or a 10th of usual, are enough for the first day of the Lunar New Year,” Gu said. “But this year, due to the epidemic, most people stayed in Shanghai, which made demand jump. On the second day of the weeklong holiday, vegetable stocks ran out at many retail outlets in the city, and one piece of Chinese cabbage was even selling for 60 yuan (US$8.45).”

That posed a serious challenge because many vegetable suppliers had left the city to celebrate the holiday with families.

Gu reacted quickly. He first asked vegetable traders who remained to bring all the produce they had in warehouses to the Jingjiao Wholesale Market. It all sold out quickly.

At the same time, he began contacting vegetable traders who had left the city, seeking their help in the dire situation. Gu barely put his phone down, he said.

His efforts paid off. On the third day of the Lunar New Year, 85 percent of vegetable traders returned to the market and supplies of vegetables reached 3,000 tons.

One trader from Shandong Province, who sources vegetables from Fujian Province much further south, even persuaded his family and relatives to accompany him to Fujian to dig up carrots there.

As the epidemic accelerated in China, more tough challenges lay ahead. The central government called on all Chinese to practice social distancing and to limit transport.

But that directive didn’t work for Jiangqiao Wholesale Market, whose trade requires close contact among sellers and purchasers, and needs a reliable transport system.

“We have to be crowded,” Gu said, pointing to the 6,000-8,000 vegetable sellers and buyers that keep the market functioning and the transport needed to get produce to supermarkets, canteens and other smaller produce markets around the city. But preventive measures were well in place.

The market didn’t change vegetable-inspection procedures during the epidemic outbreak. The quality of produce remained at 99.9 percent, according to Gu.

With transport around the country disrupted, it was difficult to get produce to market. Gu cited the case of one vegetable hauler who had to wait five hours at an expressway entrance to Shanghai. He turned to the government for help, and every vegetable transporter received, within days, a “green pass” that allowed obstacle-free travel.

The Jiangqiao Wholesale Market also supplied free vegetables to families of local doctors who had been sent to Hubei Province, the former epicenter of the epidemic.

Despite a shortage of workers, Gu rose to the challenge.

“Those doctors are the backbones of their families,” he said of the effort. “Their families needed support.”

Gu, his colleagues and other volunteers from various government departments in Shanghai packed vegetables each Thursday and sent them to the families by Friday.

In the first week, they dispatched almost 400 boxes, rising to 1,800 by the third week. They continued the project until the end of April, sending a total of 20,000 boxes.

Loss of demand from schools and the catering industry locked down because of the epidemic meant vegetable traders suffered losses. Vegetable prices dropped 10 percent on average, Gu said. But ever the optimist, he said he expected the situation will improve.