A race against time: Young boy and his family cope with rare disease

Zou Cheng named his second child Velo, which means “bicycle” in French, because he is a fan of cycle racing and thought his son might someday develop a similar interest. What he never thought was that the boy would spend his life in another two-wheeled vehicle — a wheelchair.

Xing Huanping is the director of the Bejing-based Meier Advocacy and Support Center for Spinal Muscular Atrophy, the first non-profit organization of its kind in China.

She said statistics about the disease are incomplete and don’t reflect its full extent.

Estimates show that there are at least 30,000 people in China suffering from the disease. One in 40 to 50 people may carry the disease-causing gene. There is a 25 percent chance that both parents with the gene will have a baby born with it.

“Even the figures of patients and their years of survival, released by medical authorities, are inaccurate,” she told Shanghai Daily.

Some patients cannot walk, sit or even cannot swallow, cough and breathe on their own. If symptoms show up in an infant younger than 6 months, the child isn’t expected to live beyond 2.

Chinese doctors began paying serious attention to the disease only in 2018. Because of limited medical knowledge in more remote areas of the country, some children may be treated by useless therapies with serious side effects.

In one case, a 3-year-old girl in a smaller city was treated with electro-convulsive therapy, which is more commonly used in psychotic cases. A doctor in the city told her parents that the treatment might be useful, but he confessed he didn’t know much about the disease.

In other cases, children have been placed in full-body casts, which don’t really solve the problem. 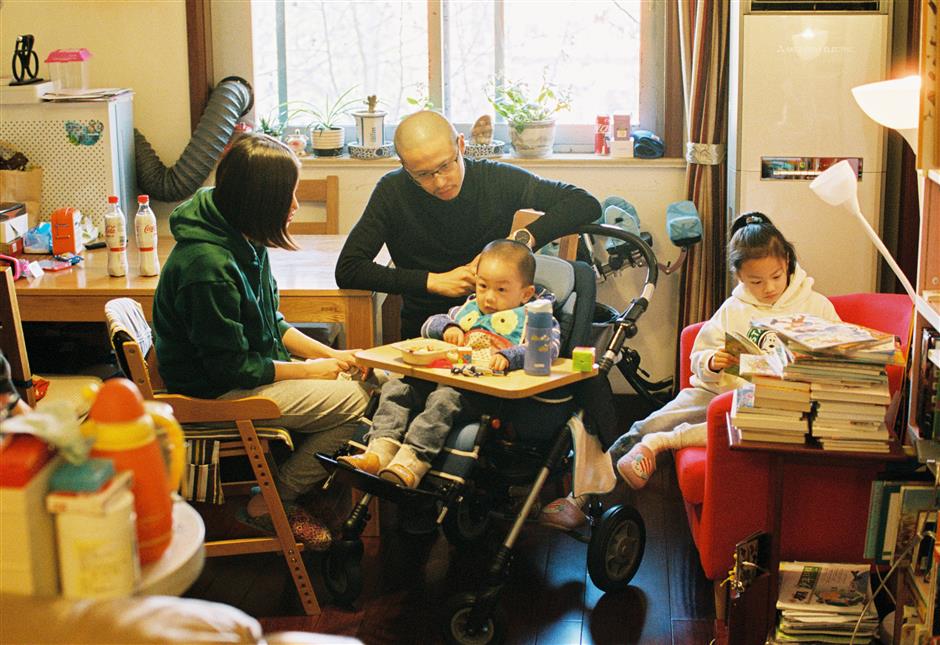 The family of Velo, who suffers from spinal muscular atrophy.

When Velo was 6 months old, Zou and his wife, surnamed Zhang, discovered that their son couldn’t turn over or sit up. They took him to the Children's Hospital of Fudan University.

At first, a doctor there told them they needn’t worry because infants sometimes are slow in development. Two months later, after several visits, the doctor suggested the boy be given a genetic test for spinal muscular atrophy.

Actually, the two months was a very short time, Xing said. A Meier Advocacy study earlier this year found that most children suffering from the disease have to wait for a long time to get diagnosis — from five months to two years.

When Zou and his wife were told their son’s diagnosis, they looked up the disease on the Internet. Their world turned gloomy.

Spinal muscular atrophy is characterized by weakness and wasting in muscles used for movement. It is caused by a loss of specialized nerve cells, called motor neurons, that control muscle movement. The muscle weakness usually worsens with age.

The disease is often classified into four types, based on physical milestones. The age at which symptoms start generally indicates how severe the condition is. For example, babies who have symptoms at birth have the most severe symptoms and most do not live beyond the age of 2. 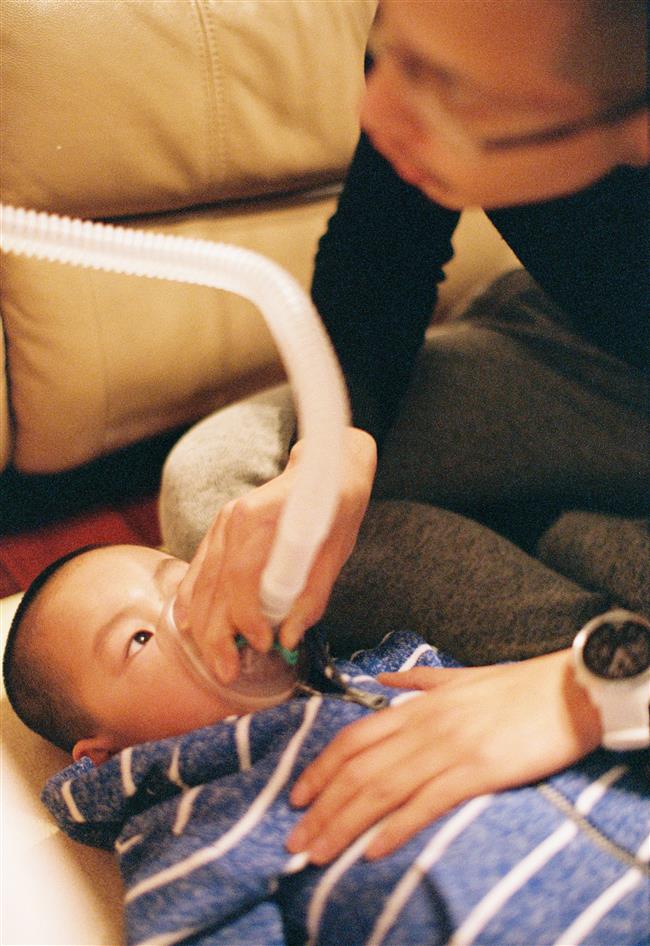 Zou uses a machine to suck the phlegm from Velo's respiratory tract.

Zou and Zhang had no idea they were carriers of the defective gene. But when three very young relatives of theirs died with similar symptoms, the couple worried about a possible gene defect at play. They underwent tests before Zhang becoming pregnant with their first child.

The tests, which don't include the test for the defective gene of spinal muscular atrophy, showed no genetic disorders. And indeed, the couple’s first child Giro — an Italian cycling term — is perfectly healthy.

Doctors initially told the couple that Velo wouldn’t survive beyond his second birthday.

“The only thing you can do is make him happy while he is still alive,” the doctor said.

The couple spent a few sleepless nights wondering why this misfortune had happened to them. Then they decided that life must go on.

Zhang resigned from her job to devote her full attention to Velo. Under medical guidance, she learned how to care for her little baby at home with help from equipment such as a sputum aspirator, a motorized wheelchair and a life-support machine. The equipment was costly — the kind of investment many families in the same situation couldn’t afford.

To ease muscle atrophy, Velo undergoes rehabilitation training, such as breathing, stretching and abdominal curls, with the help of Zhang and therapists from Meier Advocacy. 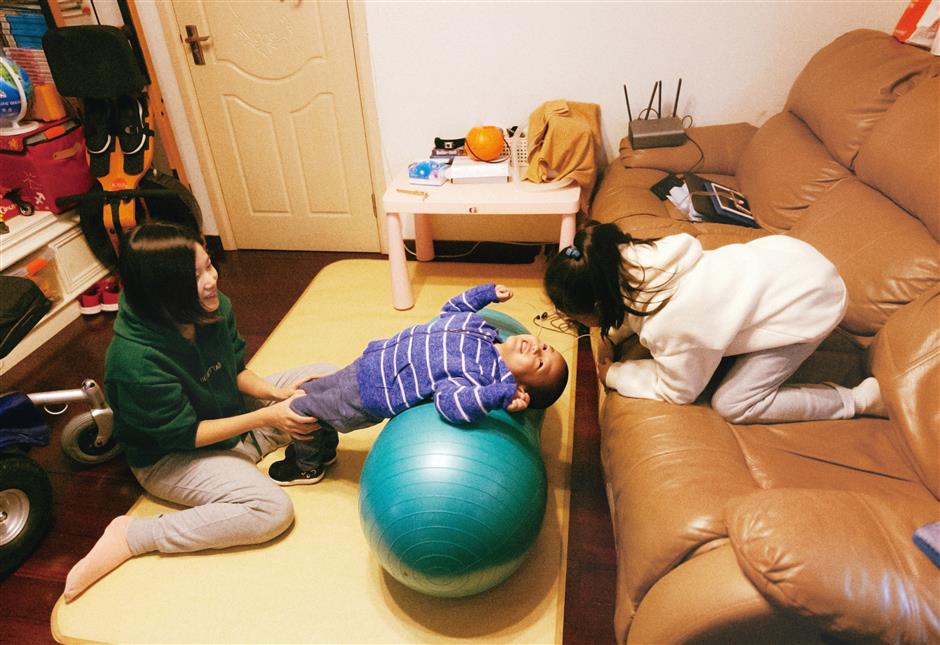 All the work and dedication has proven the doctors wrong. Velo is 5 years old now. He is one of those medical “miracles” who beat the odds. Still, his chances for a long life aren’t promising.

“We were able to get the latest information about how to handle this disease and how to access modern equipment to help our boy,” Zou said. “We are lucky to live in a modern city like Shanghai. But what about other kids?”

Velo’s parents are also tending to his education and psychological health.

Although Velo hasn’t been to kindergarten, he can reel off over 200 poems of the Tang Dynasty (AD 618-907) and understands common Chinese characters as much as Giro, who is now in second grade.

Zhang recently saw her son sobbing. When she approached anxiously, he raised his head and asked, “Why can’t I walk? I want to stand up like other kids.”

It was the first time she had seen him with such grief. He admitted there were times when he wanted a book from the shelf, but when he saw Zhang was busy, he was too embarrassed to ask her for help.

“You know,” Zhang told him, “humans are always greedy. “If a woman is healthy, she wants to marry a man she loves and have beautiful, healthy babies. But she may have one unhealthy child who is very clever and intelligent, and a healthy one who isn’t. Everyone may be upset by her situation, but if you view it from a different angle, you will be proud of who you are and how many people love you.” 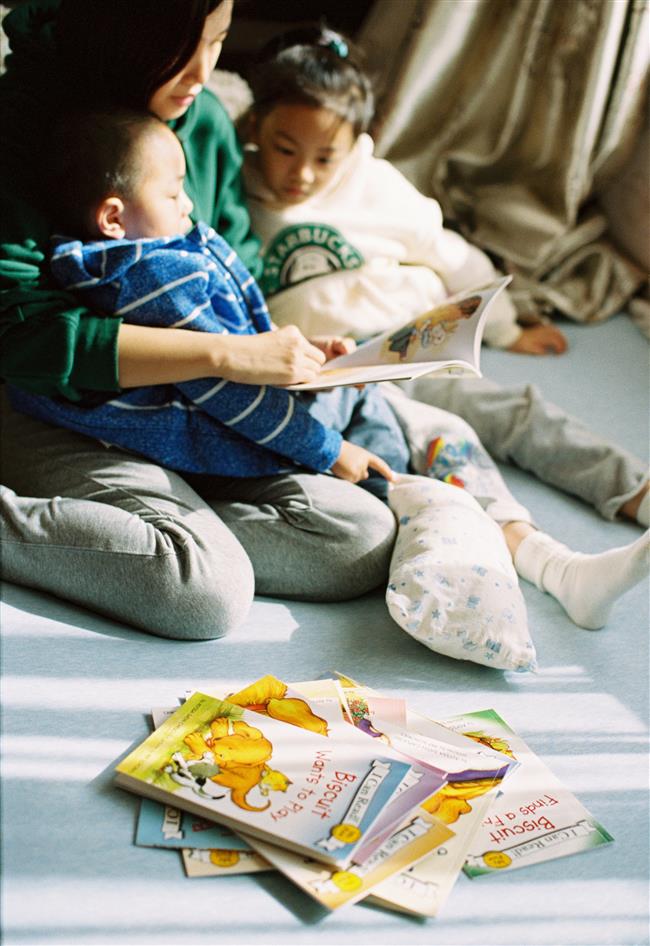 Zhang reads books for the children.

Parents of children with spinal muscular atrophy have been desperate to find any treatment, whether proven or not. However, hope appeared last year, when China approved the use of a medication called Nusinersen sodium injection to treat the disease. It is in a class of medications called “antisense oligonucleotide inhibitors” and works by increasing the amount of a certain protein necessary for muscles and nerves to function properly.

The news initially came as a big relief to families of sufferers — until they saw the cost. A 5-milliliter dose of the medicine costs 700,000 yuan (US$102,318), and it has to be injected regularly for the lifetime of a patient.

Xing said only about 80 people have been injected with the medication in China so far.

Noting that Australian patients pay only A$41 (US$30) for the same medicine because it is included in government medical insurance, many Chinese families began urging the Chinese government to make it more financially accessible here.

That prompted a backlash of sorts on social media, with some netizens accusing disease patients and their families of trying to “milk” the national health insurance system. They said the money should be spent on people with more common diseases.

“What these people are saying is destroying these families,” Xing said. “Many of them feel completely abandoned by society. People should give these desperate, hardworking families more understanding.”

Zou said he understands the pressures on government spending. Many families and patients with other rare diseases have been fighting for years to have their medicines included in national insurance.