'Symbol of beauty' is restored for women with breast cancer

The operating theater at Shanghai Cancer Center has been scrubbed and disinfected when I enter as an observer in surgical gowns. Hospital attendants wheel in a gurney carrying a 40-year-old patient who has breast cancer. She is anesthetized, and then two doctors start surgery to remove her left breast.

The hospital, which is a foremost facility in the nation for breast cancer treatment, has an average five-year survival rate of close to 90 percent.

Along with the mastectomy, Dr Wu Jiong, vice president of the center and chief surgeon of the operation, leads his team to perform an immediate breast reconstruction.

I stand and watch as five or six doctors remove the breast and then take body tissues from her abdomen to give the patient a “new” breast.

“It is not only about treating a tumor,” says Wu. “We are also preserving the integrity of patients’ bodies so women can return to their normal lives.”

In China, about 300,000 people are diagnosed with the disease every year, a primary health risk for women. The incidence in Shanghai is 80 cases for every 100,000 women, about the highest in the nation. 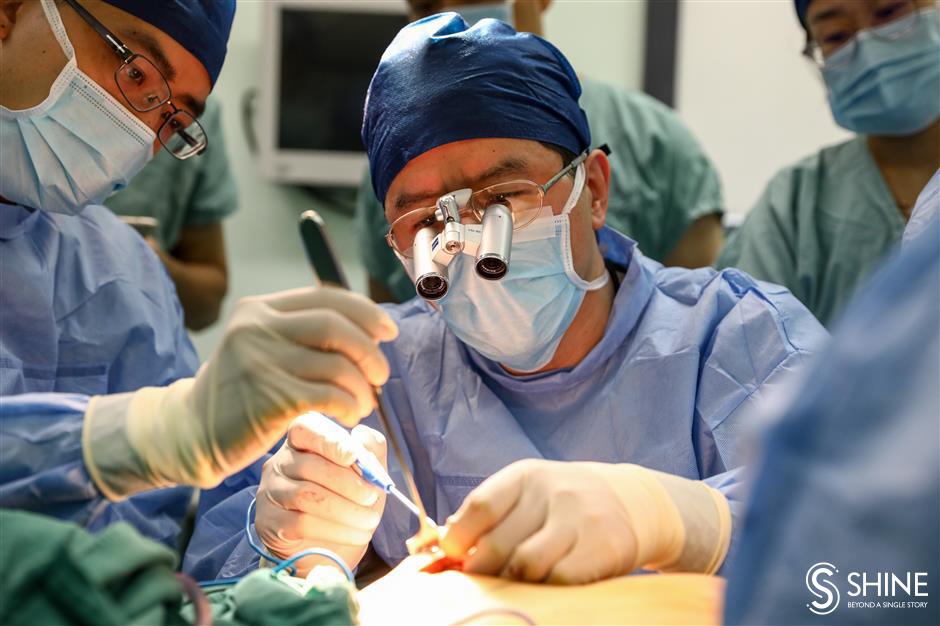 Although the fatality rate is gradually decreasing thanks to new treatment technologies and early detection methods, the disease can be a double whammy by affecting the long-term mental health of women who lose their feminine curves. In fact, many are afraid to look at themselves in the mirror after operations.

However, breast reconstruction, first adopted in China in 2012, is not yet a widespread practice due to high costs, a lack of qualified surgeons and general unawareness.

The breast reconstruction rate in China, based on cases from 110 hospitals, was 10.7 percent in 2017, far lower than 54 percent in the US.

The cancer center accounts for nearly half of all breast cancer surgeries in Shanghai. Wu said an increasing number of patients are willing to undergo reconstruction.

A woman identified only as Le, 43, was a breast cancer patient at the center six years ago. Her world collapsed when she was told she had to have a mastectomy.

“Even though my husband said he doesn’t care as long as I’m cured, I still cared,” she said. “I just couldn’t come to grips with what I was facing.”

With the help of doctors, her left breast was later reconstructed successfully, using some muscle from her back and a prosthesis. She did suffer some back problems during rehabilitation, but she said it was all worth it.

“I am now able to enjoy my life again, wearing whatever I like on beach trips,” said Le. “If there’s a chance for you to retrieve the beauty taken away by the disease, why not?” 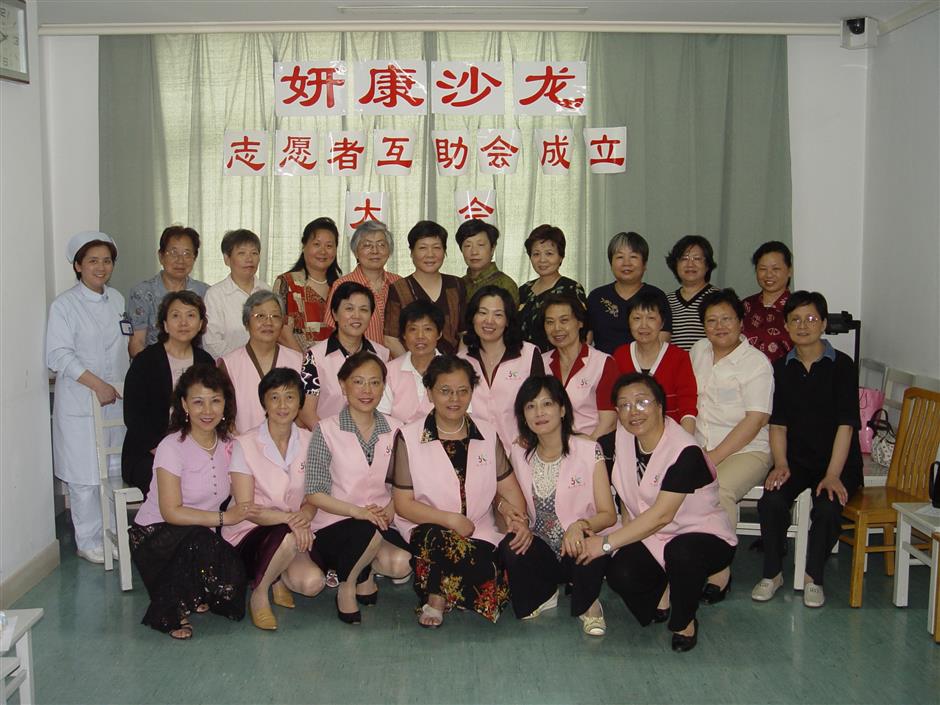 A group photo is taken during the launch of the Yankang Salon volunteer club in 2006.

Le now works as a volunteer at Yankang Salon, an organization founded by the center where breast cancer patients can find peer support and share experiences.

Various activities, such as dancing, choirs, poetry readings and outdoor sketching, are organized by the salon.

Some patients who were timid at first gradually became more willing to show off their body beauty through folk and belly dancing.

“It is a bit like a university for seniors,” said Dr Tang Lichen, attending physician of breast cancer at the center and head of post-surgery rehabilitation.

"Breasts are a symbol of feminine beauty and the secondary sex characteristic of women,” said Tang. “Mastectomies will definitely be mentally traumatic.” 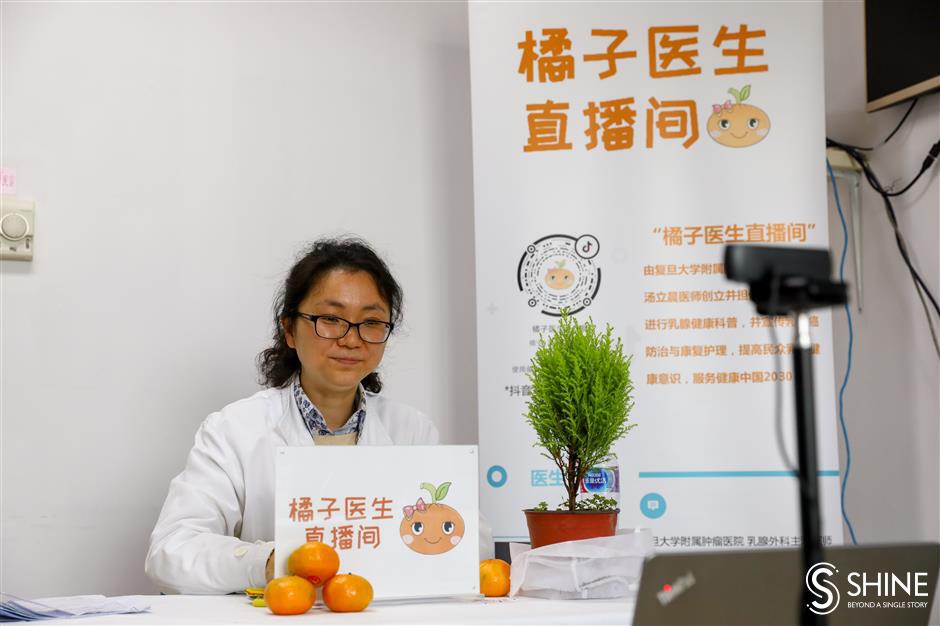 Dr Tang Lichen, or known as Dr Orange, is the attending physician of breast cancer at Shanghai Cancer Center. She has opened a livestreaming channel to share information about breast cancer among the public.

October is International Breast Cancer Awareness Month, symbolized by pink ribbons. During a symposium held in Shanghai last month, the center said its goal is to prevent females under 35 years old from having to undergo mastectomies, through earlier detection and new treatment methods.

Since 2015, the center has been developing a continuum of treatment management. It treats breast cancer as a chronic disease in terms of early-stage diagnosis, reshaping and post-surgery follow-up.

Over the past decade, Wu has led a multidisciplinary team at the center’s wing in Xuhui District. It comprises experts in pathology, internal medicine, radiotherapy, chemotherapy and other disciplines.

A new outpatient clinic opened in the center’s east wing in the Pudong New Area in September.

Patients can get one-stop diagnosis and treatment services. Evaluations are based on input from the team doctors.

In future, promoting early diagnosis and screening will be a focus to increase the survival rate of the disease. 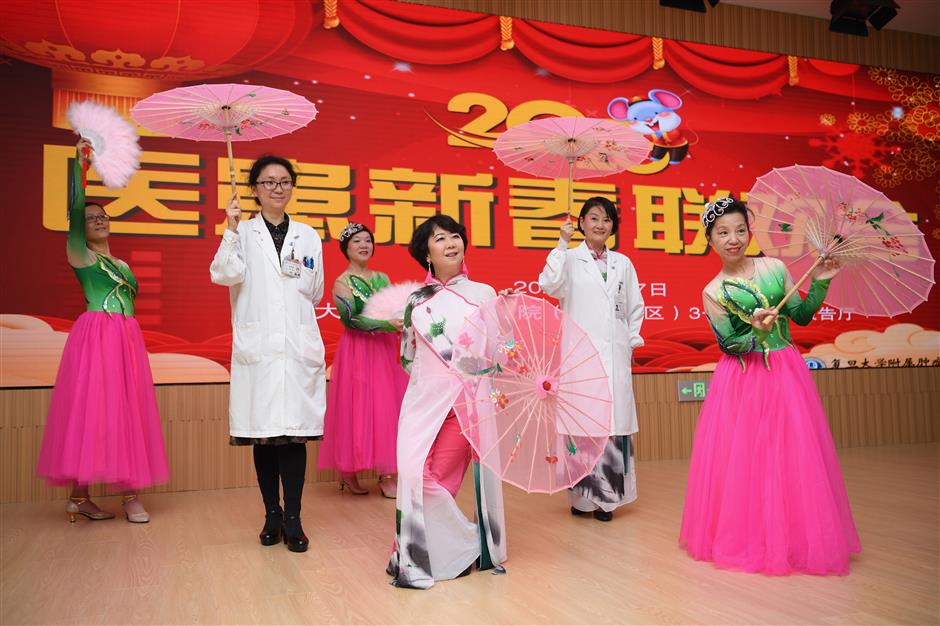 Doctors and breast cancer patients perform a dance together during this year's Spring Festival.

Doctors said they hope the public will overcome fear about breast cancer because it is largely curable if discovered early.

Currently, mammogram screening to detect cancer in its early stages is offered by the Shanghai Center for Disease Control and Prevention, hospitals, charitable organizations and medical groups.

Wu suggested a government department be established to screen higher-risk age groups on a larger scale, especially women between 45 and 55 years of age and between 70 and 74 years.

Beijing, for example, has been conducting free screening for breast and cervical cancers since 2008 for 2.9 million women aged between 35 and 59.

She calls herself “Dr Orange” because of the similar shapes of orange and human breast.

“These platforms, in tandem with our medical team, can help patients in all aspects,” said Tang.

Most people don’t realize that men can also contract breast cancer, though the incidence rate is less than 1 percent. Due to lack of public awareness, male breast cancer often goes undiagnosed until late stages of the disease. 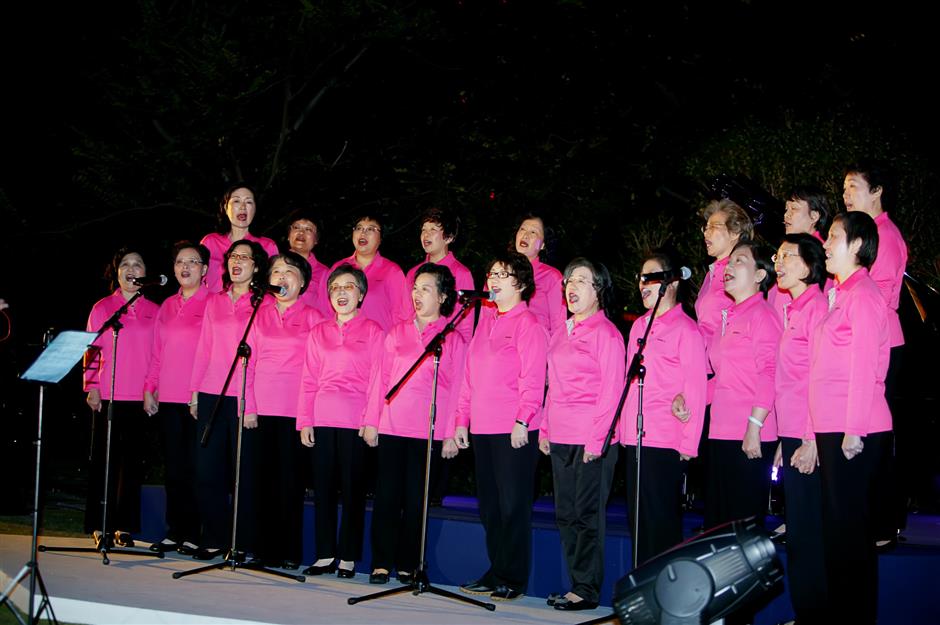 The Yankang Salon choir presents a performance in Los Angeles in 2011.

Special Reports
ADVERTISEMENT
Forum calls for more creativity to drive tech innovation
'Meet The Bund' for a Michelin star journey
Let an umbrella be your smile! A town with plenty to be happy about
Boys vs girls: It's hard to shake old ideas
Ever-evolving trends in cuisines and wines
How to tell opinion from fact: Do you live in a world of two realities?
Animal adoption as of January 24
Ordination terrace stands strong as a symbol of Buddhist faith
Cong's Kitchen brings out nostalgic local flavors
Mural an inspiration for latest shadow puppet show
EXPLORE SHINE