Buying time for the elderly, both now and in the future 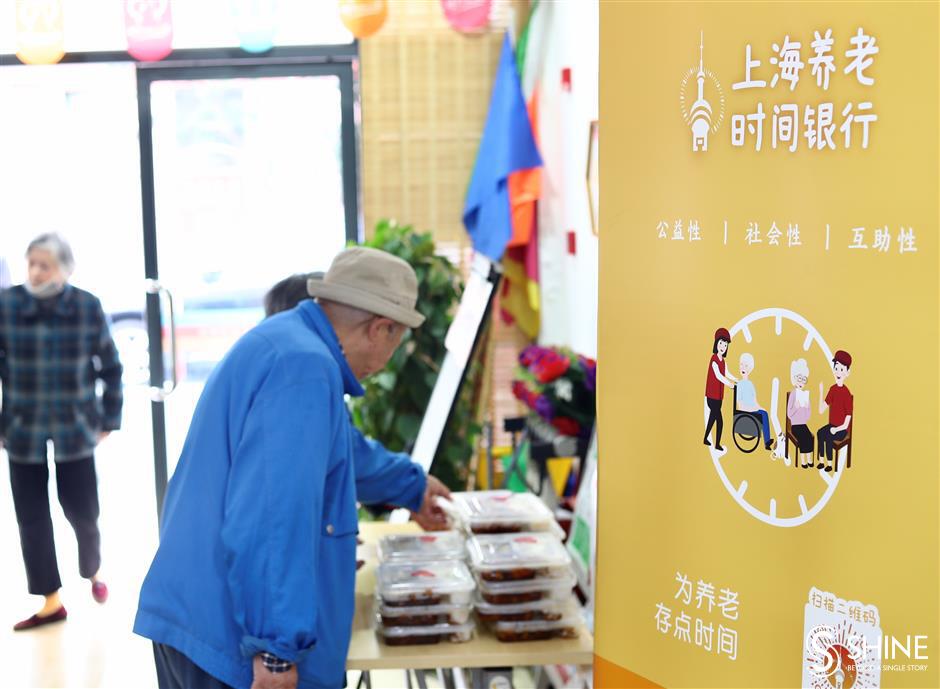 The poster of “time banks” can be seen in the Changhai Road Subdistrict in Yangpu District.

Saving time is more than just an efficient way of getting things done. It can also refer to the “bank deposits” underpinning community volunteerism.

The concept of “time banks” was created by Yale University Professor Edgar Cahn in 1980 as a medium of exchange to encourage and reward work done to build resilient communities.

The concept is simple enough. People who volunteer to help others in their communities accrue credits — called “time dollars” or “time coins” — that can be redeemed in later life if they need help.

The idea has taken hold in Britain, Japan, Sweden and other countries. And so, too, in China.

Time banks were introduced in China in the 1990s, and Shanghai was one of its first adopters. However, the project failed due to lack of clear rules, volunteers and good management.

Recently, the concept has been revived, in part as a response to China’s rapidly aging population. A new round of test runs of time banks has started in Shanghai, Nanjing and Beijing.

The Chinese version mostly aims to encourage younger senior citizens to provide services to older counterparts. The volunteers amass “time coins” that they can later “cash in” when they need services. It’s a form of saving for the future. 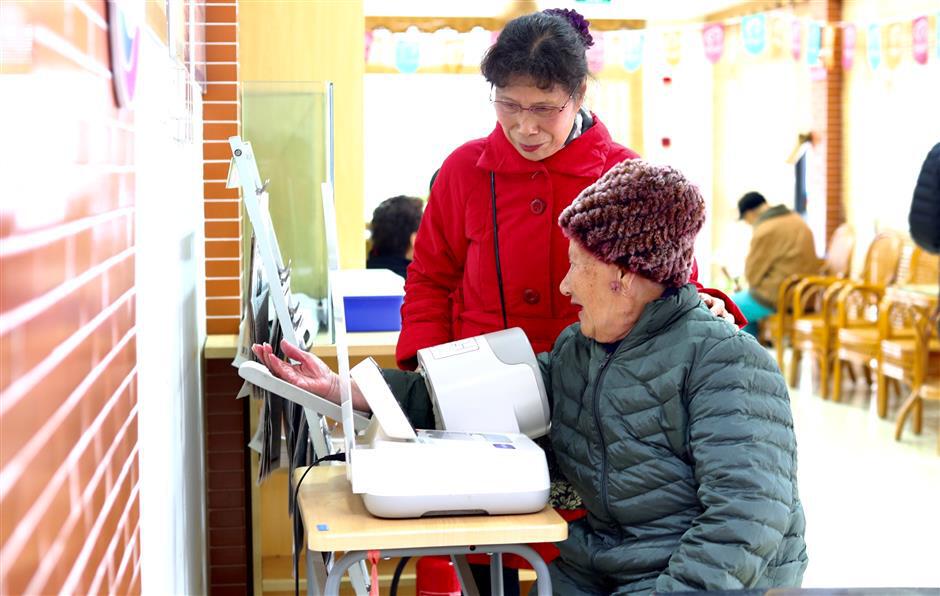 Volunteer Yang Beifen guides an older senior resident to check on her blood pressure in the Changhai Road Subdistrict in Yangpu District.

“I am happy to help them before I become too old to look after myself,” said Yang Beifen, 68, a community volunteer in the Changhai Road Subdistrict in Yangpu, where a time bank has been created.

“I have accumulated over 10 coins now, and it’s comforting to know that I can use them if I need to in the future,” she said.

Time banks are one way to address the problem of an aging population. By the end of last year, there were more than 5.2 million people aged 60 or older in Shanghai. Of those, about 30 percent were aged below 64, and 16 percent were over 80.

“Many young people are too busy to care for the elderly, so the old have to help each other,” said Zhang Hongdi, a staffer in the Changhai Road Subdistrict. 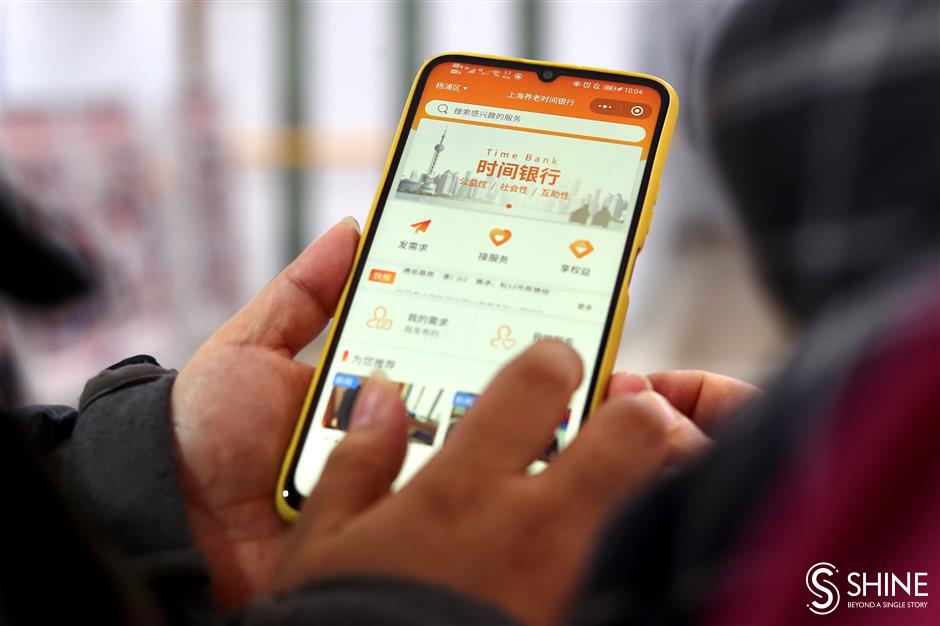 A WeChat mini program called “Shanghai for the Aged” was developed by the Bank of China. After log-in and identity authentication, a community helps elderly residents publish the services they need then people can volunteer to provide them.

“One hour of service equals one ‘time coin,’” explained Zhu Jiaying, who is in charge of the in Yangpu. “If a service time is less than 40 minutes, that time is added to the next service to make up an hour.”

As of now, over 930 volunteers in the district have joined the project, serving more than 12,700 people.

The current program actually builds on a program that began nearly 10 years ago to encourage seniors to help more elderly residents. About 110 people aged between 54 and 70 there are looking after some 1,500 older residents. 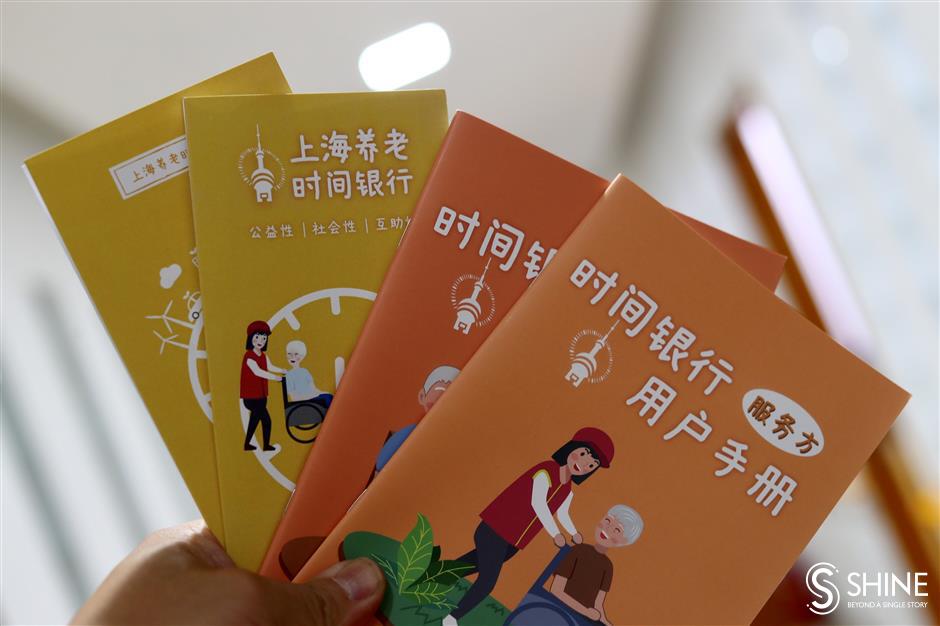 The user guides for the time bank

For many of the volunteers, the onset of the program wasn’t easy. When they called on elderly people to check on their conditions, they were often met by snubs such as: “Why are you calling me? Do you think I have died? I am not dying. Don’t call on me anymore.”

Such rebuffs weren’t uncommon for Xu Min, the youngest volunteer in the group.

“Many seniors are living alone, so we need to check up on them every day,” Xu said. “But some of them didn’t initially want the intervention of a stranger.”

A 72-year-old woman surnamed Bo was one of those seniors. After her husband died, she didn’t want volunteers checking up on her.

Xu tread gently. She would chat about daily trifles like the weather when she contacted Bo.

“When the older seniors become familiar with me, they are willing to discuss their conditions without much prompting,” she said.

One day, when Xu was taking a walk with her mother, Bo met them and said to her mother, “Xu is so nice. She is my daughter now, though there is no blood relationship.”

Xu now is in charge of 24 seniors. Many of them call her if they are hungry, ill or have household appliances out of order. 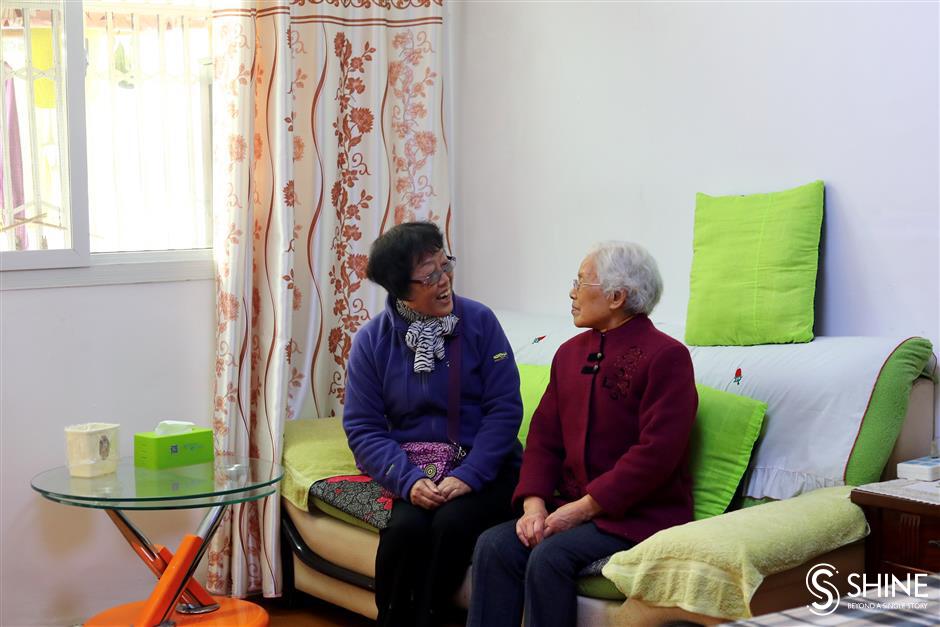 A younger senior volunteer (left) chats with an older senior resident in the older counterpart's home in Yangpu District.

Volunteer Yang, who has been working in the program for eight years, said some of her elderly charges suffer from depression.

“They have no place to release their negative feelings,” she said. “We need to bring them out of the narrow worlds they are locked in.”

Reading clubs, weaving classes other activities are just the .

“When they socialize with their contemporaries and even see their own handiwork sold at a charity bazaar, they see glimmers of hope and find meaning in their lives,” Yang said.

“The launch of time bank recognizes our efforts,” Xu said. “It shows that what we have been doing all these years is meaningful.”

Time bank official Zhu said the project is still evolving according to user feedback. In the future, the bank will link up with a community school for senior citizens to expand of time coins.

“The needs of older seniors are a critical challenge for the city,” Zhu said. “There's a long way to go.”

﻿
Special Reports
ADVERTISEMENT
Let an umbrella be your smile! A town with plenty to be happy about
Boys vs girls: It's hard to shake old ideas
Ever-evolving trends in cuisines and wines
How to tell opinion from fact: Do you live in a world of two realities?
Animal adoption as of January 24
Ordination terrace stands strong as a symbol of Buddhist faith
Cong's Kitchen brings out nostalgic local flavors
Mural an inspiration for latest shadow puppet show
China film market a marked global triumph
Interactive plays inspire children with cognitive disorders
EXPLORE SHINE