Wallet of the future? Rollout of new e-yuan continues apace 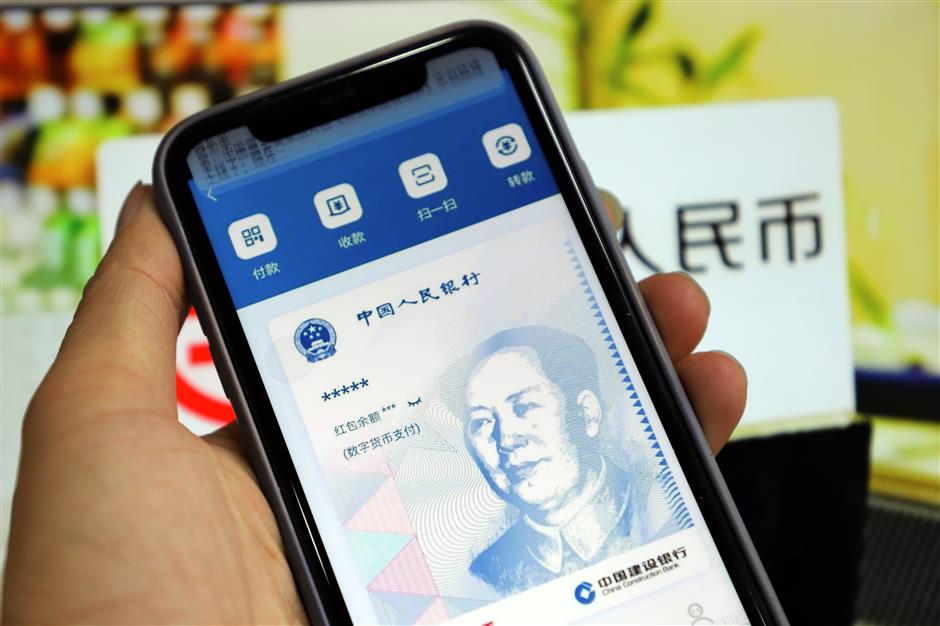 Sally Wang, a Shanghai office worker in her 30s, recently indulged herself in something novel – spending with a virtual yuan.

When she heard news reports of China’s pilot project for the new digital yuan in several cities, she went to a branch of China Construction Bank in her neighborhood to sign up as a test user.

It took her only five minutes, with the help of a bank account manager, to complete the paperwork. All she needed to provide was her name, telephone number and the operating system of her mobile phone.

Three days later, Wang found herself the owner of a “digital yuan wallet” on the bank’s mobile app.

Unlike wallets containing small sums of free money in trial distributions in cities like Shenzhen, the ones given to Shanghai participants are empty. Users like Wang have to put money into the wallet before trying out the system.

Wang duly transferred 100 yuan (US$15.2) into the account, and in her first test of the currency bought a soft drink from a vending machine at the bank. So far, so good.

She noticed that e-yuan can be used to pay off credit cards and even Communist Party membership dues. The China Construction Bank app also features an online shopping mall for e-yuan.

Unfortunately, not all the touted uses of the digital money are fully operational in this experimental stage, but Wang isn’t deterred. She said the new currency, compared with her normal payment systems like Alipay and WeChat Pay, is “acceptable,” but it will take her some time to get used to it.

Major state-run commercial banks began trial runs last August, with “wallets” for employees and invitation-only clients. The pilot program has since been expanded to the general public.

“It’s much faster to apply for a digital yuan account with our bank’s app,” he said, noting that customers would otherwise have to wait longer to gain access to the government’s e-yuan app.

Banks are offering shopping coupons, discounts and cashbacks on mobile bill payments to pilot-program participants, but mass text promotions and sharing of such information online is currently prohibited by the central bank, Xu noted.

The People’s Bank of China, the nation’s central bank, is responsible for issuing and distributing the digital yuan to commercial banks, which then channel the cyber currency to end users.

So far, China’s six major state-owned banks have been on the frontline of trials leading to the official rollout of the new currency sometime in the future.

In a written interview with Shanghai Daily, China UnionPay Merchant Services Co, the largest acquirer in Asia Pacific, outlined some of the progress to date on application of the virtual yuan.

It signed an agreement with the Digital Currency Research Institute of the People's Bank last December.

UnionPay Merchant Services has set up a special team to handle digital yuan services in areas such as unmanned supermarkets, public travel, smart parks, scenic spots, and the health sector. It has helped pilot cities build unique payment systems to extend the service to more than 14,000 merchants.

The e-yuan utilizes secure technologies such as blockchain, as well as technologies that allow offline money transfers when two mobile phones connect.

With the e-yuan app, users can make retail payments by scanning a barcode. They can also send money, request a payment, manage funds, link the wallet to other accounts and review all transactions.

Compared with popular payments channels such as Alipay and WeChat Pay, users may not really see much difference, but the e-currency’s blockchain structure will ensure “traceability, encryption and supervision oversight,” according to officials from the People’s Bank of China. 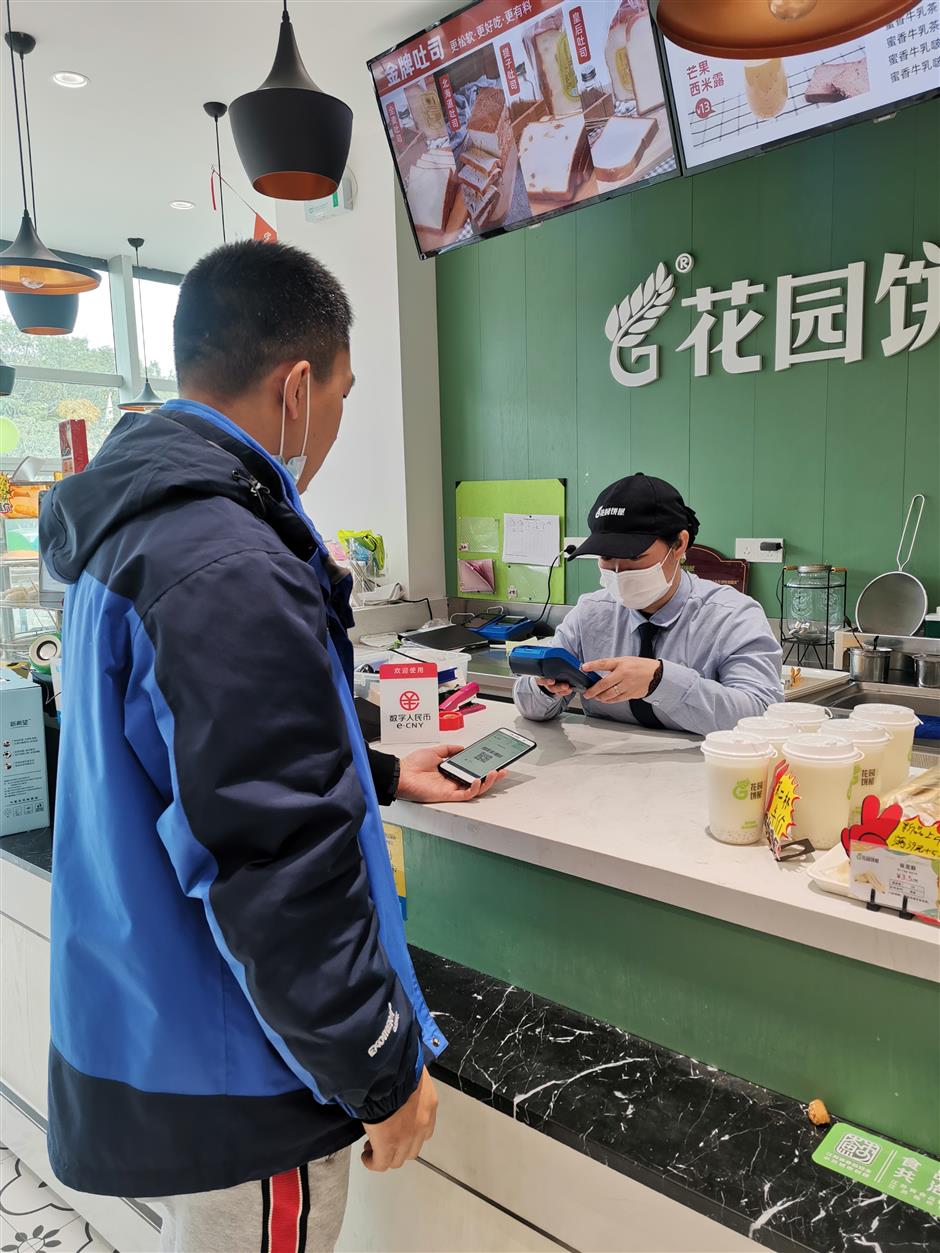 A man is  making payments with e-yuan  at a bakery store in Suzhou,  one of the pilot cities for the digital currency.

In January, the e-yuan was tested at a canteen in Shanghai Tongren Hospital, marking its first trial in a smart-card format.

With such technology, payments can be processed without a mobile network or phone devices, a feature that benefits senior citizens who have limited access to smartphones, industry insiders said.

During the past year, there were reportedly several million e-yuan transactions, totaling about 200 million yuan. Tests spanned thousands of businesses in cities like Shenzhen, Chengdu and Beijing, and also engaged consumers directly in the process though lottery-based selection of e-yuan wallet users.

By one estimate, the digital yuan could account for 15 percent of all Chinese electronic payments in 10 years.

“This year will be the year when China becomes a major test lab for the mass adoption of digital money,” said auditing firm PricewaterhouseCoopers (PwC) in a report.

China’s digital economy can be metaphorically viewed as a new energy vehicle, with the digital yuan as a core battery component, the report said.

The southern city of Shenzhen announced last Saturday that it will start another trial round of the e-yuan lasting two weeks and involving 500,000 local residents.

In addition to shopping malls, hospitals and vending machines, pilot trials have been extended to campuses.

Students and teachers at Renmin University in Beijing who are allocated e-yuan wallets can use it to pay for meals in the university canteen, laundry services, and other campus facilities by scanning QR codes or using facial recognition, according to media reports.

Postal Savings Bank of China, one of the six banks participating in the program, said in its recent annual report that it will build a new urban community circle bonded by the e-yuan this year. It also plans to develop digital-currency demonstration towns for rural finance. 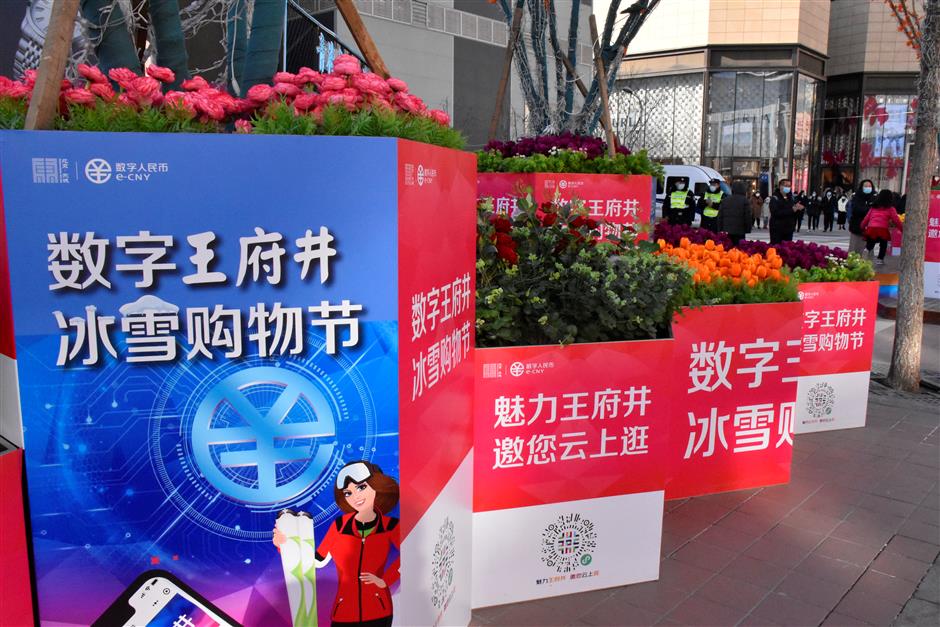 Meanwhile, Beijing is pushing ahead the digital yuan for international use.

Although the e-yuan is designed primarily for smaller retail purposes, cross-border applications for the digital currency are feasible, according to Wang Xin, head of the People’s Bank of China research bureau.

“When the time is ripe and market demand calls, China will expand cross-border use of its sovereign digital yuan,” he told a recent media briefing. “Overall, the feedback from participating institutions and regions is positive.”

The People’s Bank of China has just tested the e-yuan across borders in collaboration with the Hong Kong Monetary Authority.

Under a one-day pilot experiment, Hong Kong residents could use the virtual yuan to pay for things in the neighboring mainland city of Shenzhen.

Jennifer Li, a market specialist at an asset management company in Hong Kong, told Shanghai Daily that she was excited to try out the cyber yuan.

After taking an online course on the digital yuan, she said she realizes the benefits of the new currency over other kinds of payments, especially when there’s no access to the Internet.

“Besides, it is an environmentally friendly payment option,” she said.

China now leads the world in the realm of central bank digital currencies. Other nations are at various stages of research and development. The Bank of Japan has recently begun a feasibility study on issuing its own digital currency, according to a Reuters report.

However, some major central banks, such as the US Federal Reserve, remain cautious about launching their own digital currencies, citing unresolved concerns that include the potential of theft and fraud.

“We do think it’s more important to get it right than to be the first,” Fed Chairman Jerome Powell has said.

The digital yuan will dramatically reshape the payments industry, according to Sun Yang, director of financial technology research center at Suning Institute of Finance.

It will significantly reduce the fee cost of merchants and force the payments industry to shift its business model from fee-based to value-added services, he said. In a new realm of survival of the fittest, it may shrink the number of industry players.

For consumers, data privacy will be better protected with e-yuan payments, Sun said.

He noted Shanghai has an advantage in piloting the digital yuan because of its long experience as a pioneer in new Chinese economic policies, such as the city’s successful Free Trade Zone.

“In the future, if digital yuan is allowed to be used in financial and secondary markets, Shanghai will definitely stand out,” Sun said.