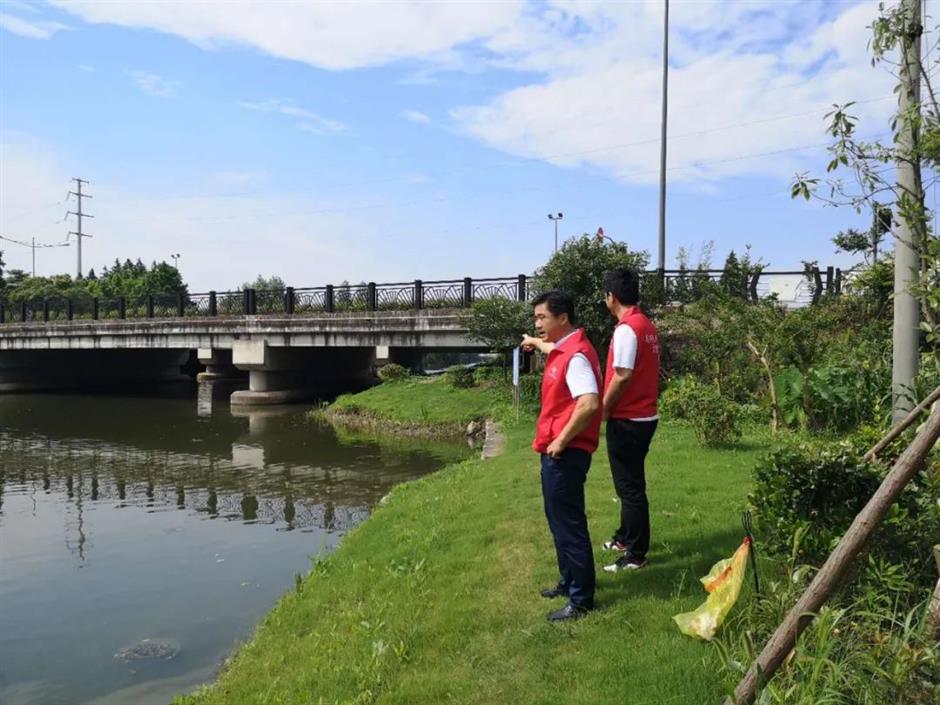 By June last year, there were about 7,000 creek administers in Shanghai, creating an efficient creek management system.

A “creek administer” is responsible for the conservation of a creek, including protection of water resources and ecosystem, sewage and drainage management and crackdowns on illegal activities. Assistants and volunteers also have regular meetings to improve patrols.

This method was first practiced in neighboring Changxing County, Zhejiang Province, in 2003 and introduced throughout the nation in December 2016.

By June 2018, all 31 provinces and regions in China had adopted the system, with more than 300,000 administers appointed at village, county, city and provincial levels.

It was introduced to Shanghai in 2017. By June last year, there were about 7,000 creek administers in the city.

A total of 75 subdistricts and towns were listed as standardized areas for the system.

On-site stations were first set up in Jinshan District, which can benefit the emergency measures with the assist of monitoring devices. Wujing Town and Heping Village in Minhang District were the first to set up such stations in towns.

With the new approach, the overall water ecosystem in the city has been improved, but the disposal of sewage and supervision of illegal boats and buildings still need to be intensified, according to the local water bureau.

To enhance cooperation and enhance efficiency, an online information platform within the Yangtze River Delta region was launched last November.

With the sharing platform, creek administers in Shanghai’s Qingpu District, Suzhou's Wujiang District in Jiangsu Province and Jiashan in Zhejiang Province can work together to preserve waters such as Taipu River and Fenhu Lake.

Since January 2018, the water quality in over 30 areas in Wujiang District had reached Standard III (qualified for fishery). 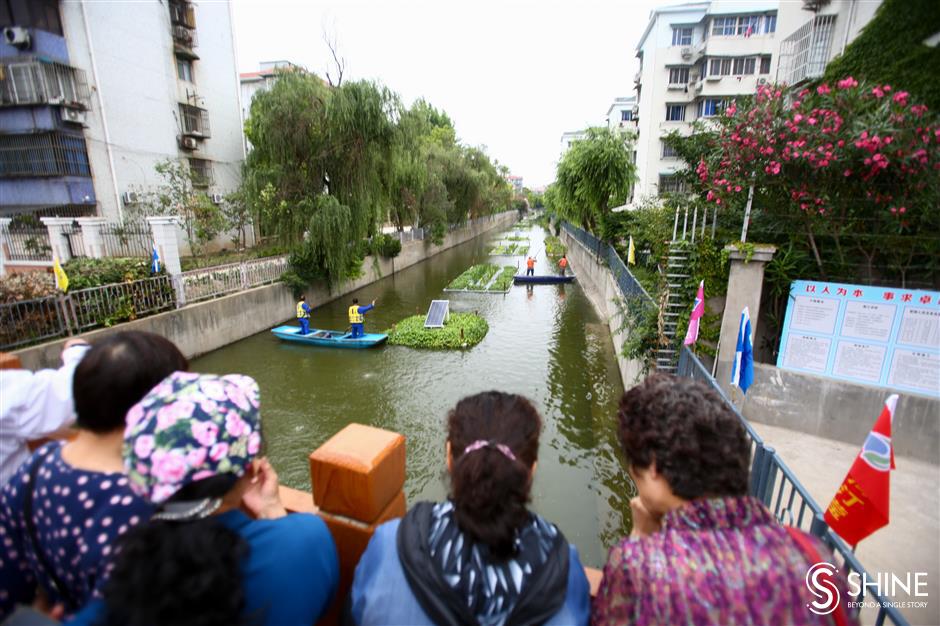 Local residents are amazed by the clean water of Pengyuepu River in Jiang'an District.

Shanghai is to build new ecological water networks across the city to enhance the overall water environment, according to the city's new five-year development plan.

The city government has been emphasizing the significance of building a clean water ecosystem to raise awareness of the water environment.

The new networks, carried out by each urban district and each town in rural areas, can enable a much more efficient and systemic management of the 47,000 creeks running through the city.

Instead of focusing on the treatment of a single creek, the new measures seek to link water channels within the area for a better ecosystem. Greenery, riverbanks and drainage systems will be comprehensively ramped up.

To protect the local environment, multiple goals have been set up in terms of water resource treatment, green development, the building of scenic areas and rural revitalization.

New standards for the evaluation of water and soil quality as well as for contamination are also specified.

More than 50 ecological water networks are expected to be built by the end of 2022, covering over half of the city’s area.

Currently, the new approach has been adopted on a trial basis in nine villages, including Changda in the Pudong New Area, Lianhu in Qingpu District and Shuiku in Jinshan District. It will be introduced to another 15 villages and districts by the end of the year.

Pudong, for example, is home to more than 16,000 creeks. In the past five years, the district has been pushing comprehensive treatment for a better water environment.

Severely polluted channels had been cleaned by 2018, while heavily polluted ones had been almost treated by the end of last year. The total water coverage area has expanded by 0.66 square meters.

The "creek administer" system was launched in Pudong back in 2017. A total of more than 1,300 administers there can carry out their duties via mobile apps.

Six channels, including Gujiabang, Zhangjiangbang and Changxin Creek, were listed as the most beautiful creeks in the city.

To protect the Zhangjiang Hi-tech Park and Shanghai Disneyland Resort from floods and typhoons, a new 31-kilometer drainage channel will be built, running from the Huangpu River to the creek near the Pudong International Airport. It will also be an ecologically friendly space providing leisure for nearby residents.

“The creeks used to be narrow and surrounded by water plants, which often caused floods to farmland nearby,” said villager Hong Jianguo. “Now the water can be drained quickly after huge rain.”

In the next step, more efforts will be made in terms of contamination control and disposal.

Aligned with the improvement of water, the overall infrastructure of the village will also be revamped including roads, piers and tourist destinations. 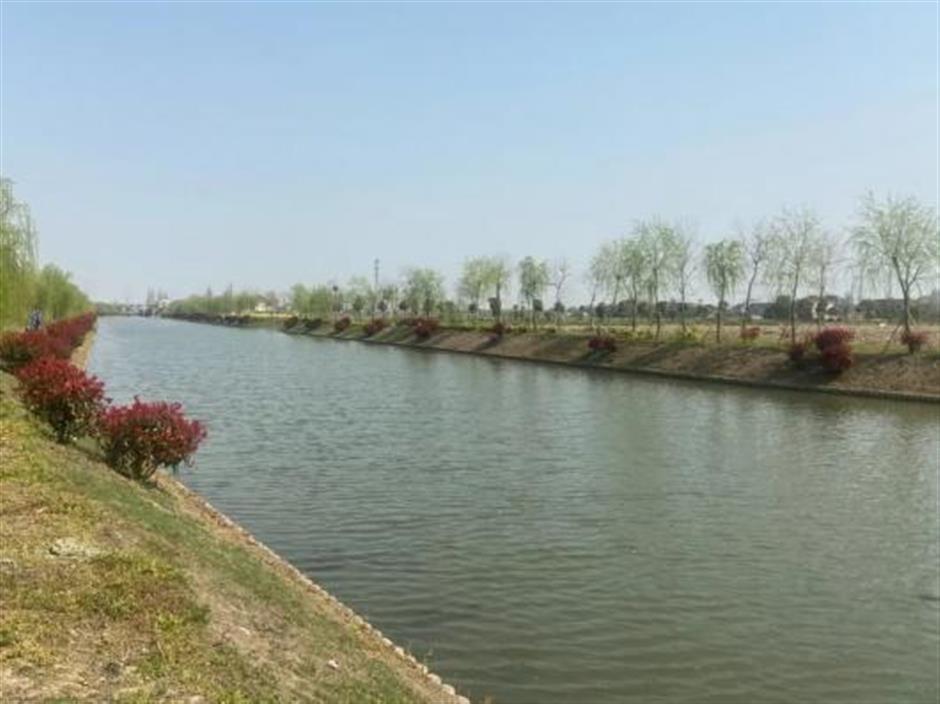 Leisure lanes along a creek in Zhoujing Village in Shanghai's Jiading District. Many projects have been carried out to improve the overall water ecosystem.