"Excuse me, where's the herb garden?" a lady asked me last Friday afternoon, as we came across each other in the vicinity of Shanghai University of Traditional Chinese Medicine in the Pudong New Area.

"Are you attending the guided tour of the herb garden?" I asked.

"Yes," she smiled, apparently feeling I might know the way.

"Are you sure?" she quipped. "My mobile map shows me the other way round."

"Don't worry, we can cover 155 meters quickly and then see where we are," I assured her. She nodded her approval.

"Are you a fan of traditional Chinese medical herbs?" I asked her as we walked on.

"Well, I'm a reporter interested in learning and spreading the culture of traditional Chinese medicine," I said frankly, hoping frankness would beget frankness. "So, what do you do?"

"I'm a pediatrician," she replied with a candid look at me.

"A Western-trained physician?" I asked, a bit surprised.

"Right," she answered, amused by my surprised look.

"What do you learn TCM for?" I asked. "Isn't it poles apart from Western medicine in terms of medical theories and therapies?"

"If I learn TCM well, I can better diagnose a disease by putting it into perspective – how it evolves or dissolves in relation to the overall health condition of a patient," she explained. "Now modern medicine also seeks to check the general health of a patient when it comes to diagnosing a certain disease, but still TCM has its unique advantage in restoring a patient's overall internal balance." 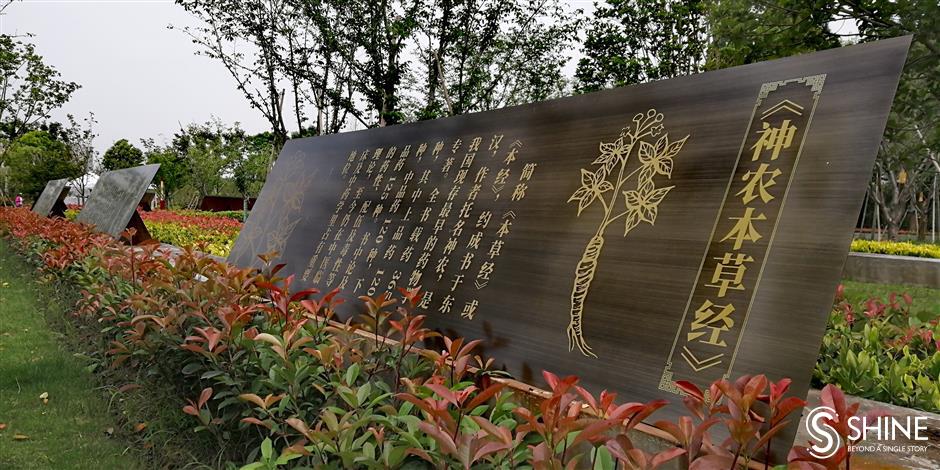 A corner of the herb garden near Shanghai University of Traditional Chinese Medicine in Pudong.

No sooner had I prepared to ask another question than we found ourselves at a grass-and-stone path leading to the herb garden, separated from the university by a well-shaded green river.

The herb garden was first built on the campus in 2006. Last year, the university decided to relocate the garden to an adjacent public space to meet people's demand for popular TCM education. On June 2, the university announced the opening of the new garden, which spreads over 7,200 square meters, much larger than the original one.

The guided tour we were to take was the last of its kind in a three-day promotion campaign to introduce hundreds of herbs with different healing effects. The tour had a poetic title, "Knowing A Hundred Herbs Through Their Fragrance."

A professional guide explains the medical uses of herbs to a group of primary school students.

At the center of the herb garden, there were some tents and tables, where a group of senior citizens and primary school pupils were waiting for a professional guide.

After the tour began, the guide pointed us toward a plant called Artemisia annua, from which Nobel Prize winner Tu Youyou had extracted anti-malaria agents that saved millions of lives.

Without the help of a signboard and the guide's explanation, one would probably regard this special plant as just any other grass. But according to David J. Newman and David G. I. Kingston, two leading medical scientists in the US, this plant was already used to treat fevers in Chinese medicine as long ago as AD 340. 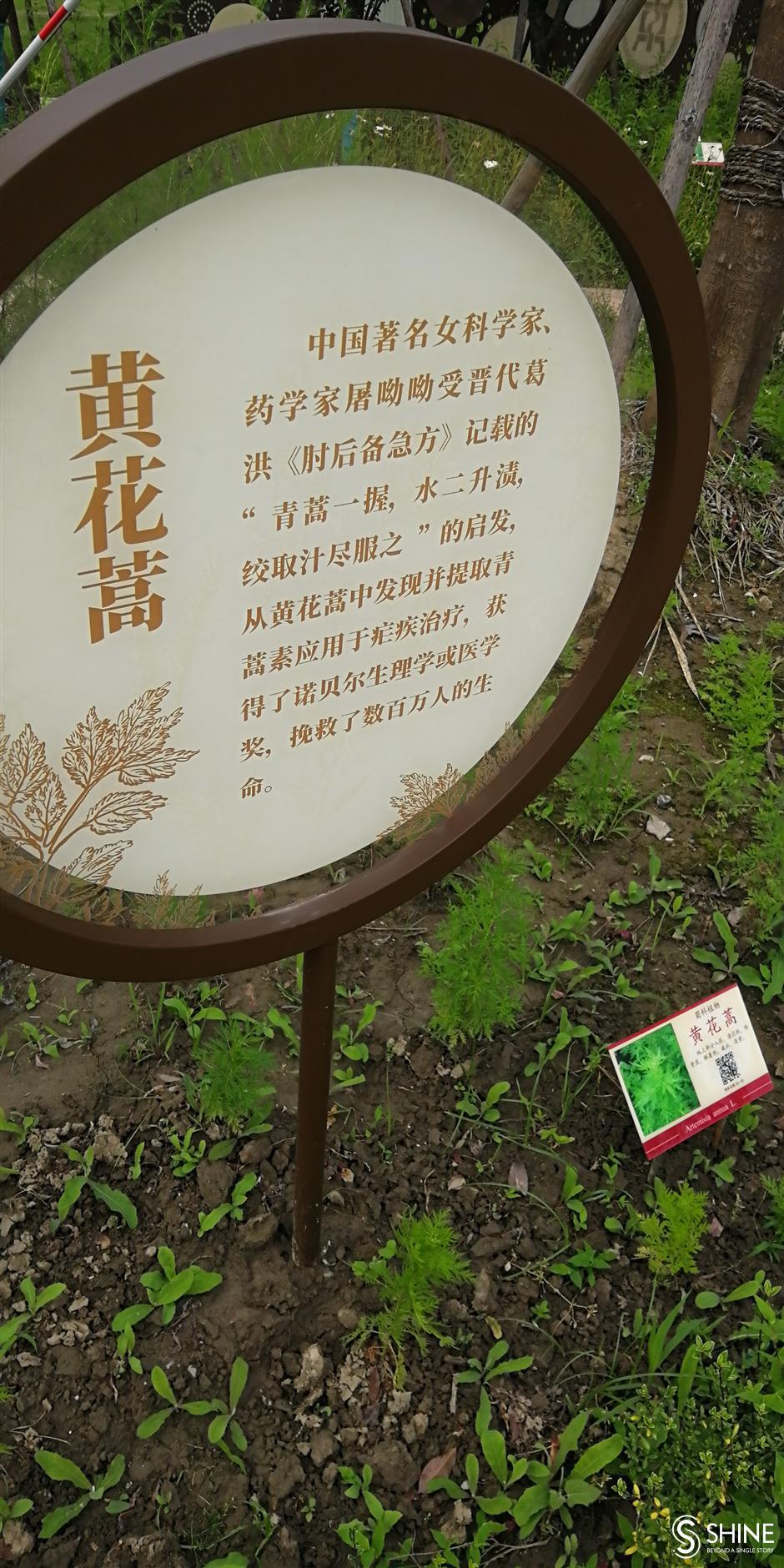 As we walked around, the pediatrician and I continued our casual conversation. I learnt that she works at a leading pediatric hospital in Shanghai and has an advanced professional title comparable to university associate professorship. She said she is now qualified to prescribe both Western and traditional Chinese therapies to her patients, but she hopes to be further versed in TCM.

"I'm going to take a professional test in TCM in the near future," she said. If she passes the test, she explained, she will be assigned by her hospital to study with a master TCM doctor for three years – without having to leave her current job. She said a dozen of her colleagues are also preparing to take the test.

Her effort epitomizes that of many people to "rediscover" the healing power of herbal medicine and the theory behind it – the traditional Chinese belief in yin-yang balance as the ultimate source of personal and planetary health. 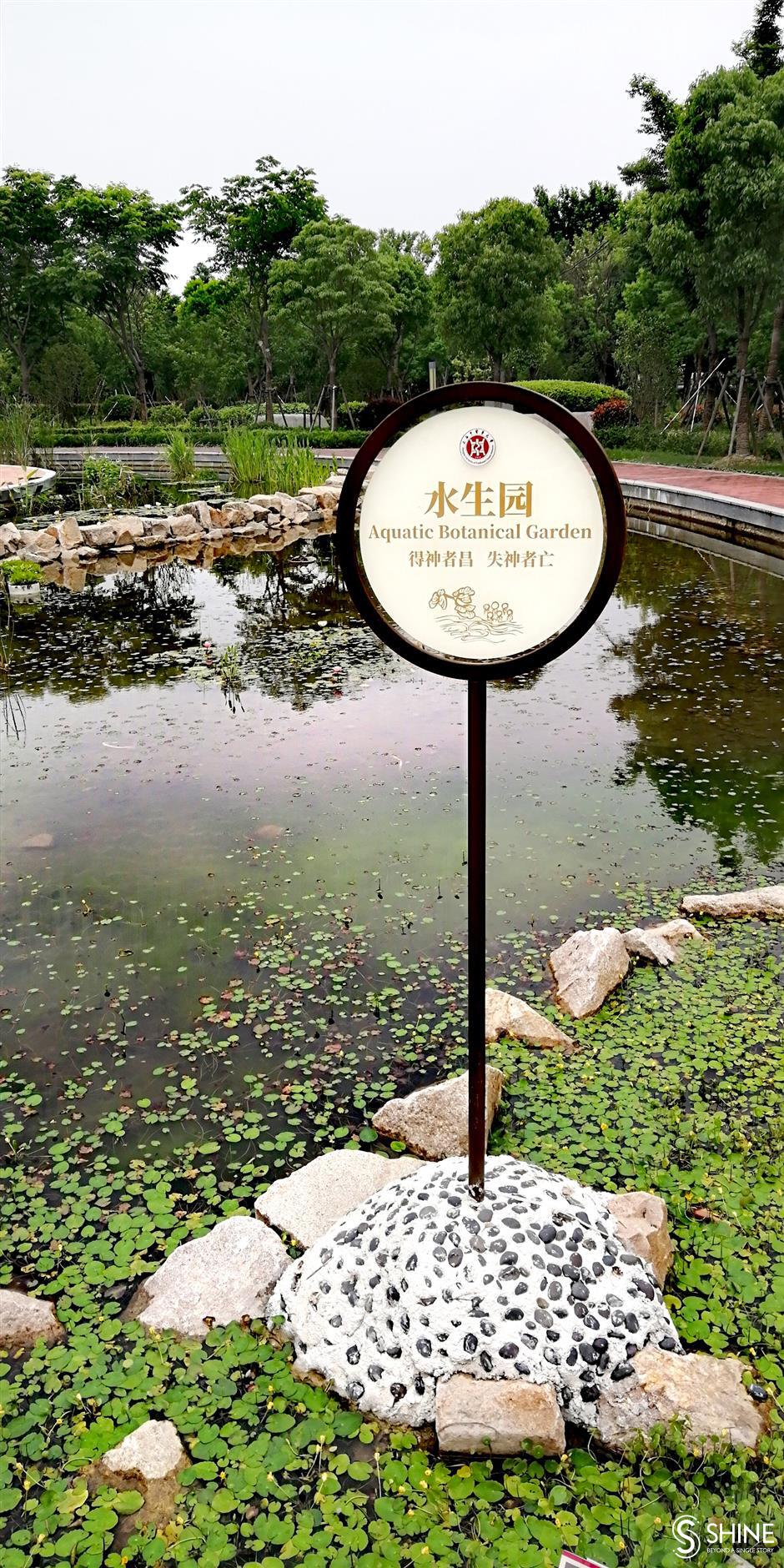 Encyclopedia Britannica explains TCM as follows: "In essence, traditional Chinese healers seek to restore a dynamic balance between two complementary forces, yin (passive) and yang (active), which pervade the human body as they do the universe as a whole. According to TCM, a person is healthy when harmony exists between these two forces; illness, on the other hand, results from a breakdown in the equilibrium of yin and yang."

During an inspection tour of Henan Province in central China on May 12, Chinese President Xi Jinping called for further development of TCM, aided by an interaction with Western medical science. The president said people have gained a deeper understanding of TCM through the fight against COVID-19.

Zhang Boli, an academician with the Chinese Academy of Engineering who helped many COVID-19 patients recover with TCM therapies, said TCM does not seek to kill the novel coronavirus per se; all it does is to strengthen the overall immune power of a patient so that the body can better defend itself against the attack of the coronavirus. In this sense, it amounts to restoring one's yin-yang balance broken by what TCM calls noxious dampness that's conducive to the growth of the coronavirus.

Zhang Zhongde, vice president of Guangzhou University of Traditional Chinese Medicine who also worked on the front line of fighting against COVID-19, put it more plainly. By tackling noxious dampness, he explained, TCM can make the environment of the human body no longer "friendly" to the coronavirus.

"We focus on 'expelling' the virus, not 'killing' it," he said. "It's like dealing with enemies on top of a mountain. We can shell and kill them with canons, but then the mountain top will also be destroyed. If, instead, we cut their vital supply of water and grain, the enemies will leave eventually." 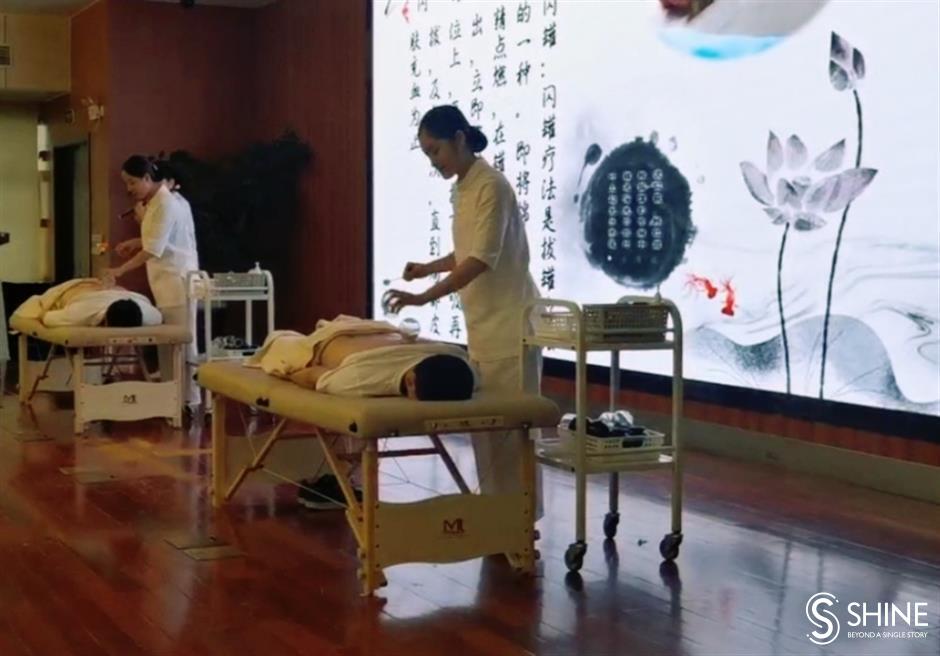 TCM's emphasis on one's overall health as a tour de force to cure a certain disease has found empathy not just from some Western-trained physicians like the pediatrician and her colleagues, but also from more and more ordinary people.

On May 30, I attended a public lecture on obesity at a packed room in Jing'an Library, which was given by Tao Feng, a senior doctor from Shanghai Municipal Hospital of Traditional Chinese Medicine. He has advanced academic degrees in both TCM and Western medicine. The title of his lecture was "The Busier, The Fatter: Is It True?" The lecture was also broadcast live online, which generated active interactions with audiences.

While noting that some "night owls" who stay up late tend to be obese, he cautioned that the culprit might be a habitual lack of sleep at the right time, not necessarily the "busyness" per se.

Indeed, according to TCM, a healthy person should sleep well between 11pm and 1am, when it's time to nurture one's gallbladder, which is key to the health of one's stomach. A healthy person also should eat breakfast between 7am and 9am, when it's time to nurture the stomach. As such, one who habitually stays up late and skips breakfast tends to suffer digestive disorders, leading to obesity and other diseases.

In the lecture, Dr Tao also proved the causal relationship between lack of sleep and obesity from a Western medical perspective. Combining TCM and Western medicine, he suggested that those who want to overcome obesity should guarantee sufficient sleep, eat regularly and slowly, and stay relaxed.

In some other cases, Tao has found that excessive worry or eating too much fat and sweet food can hurt one's spleen and/or liver, which in turn may cause fat to accumulate in the body. He has successfully cured the obesity of some patients by helping restore their spleen and/or liver health. 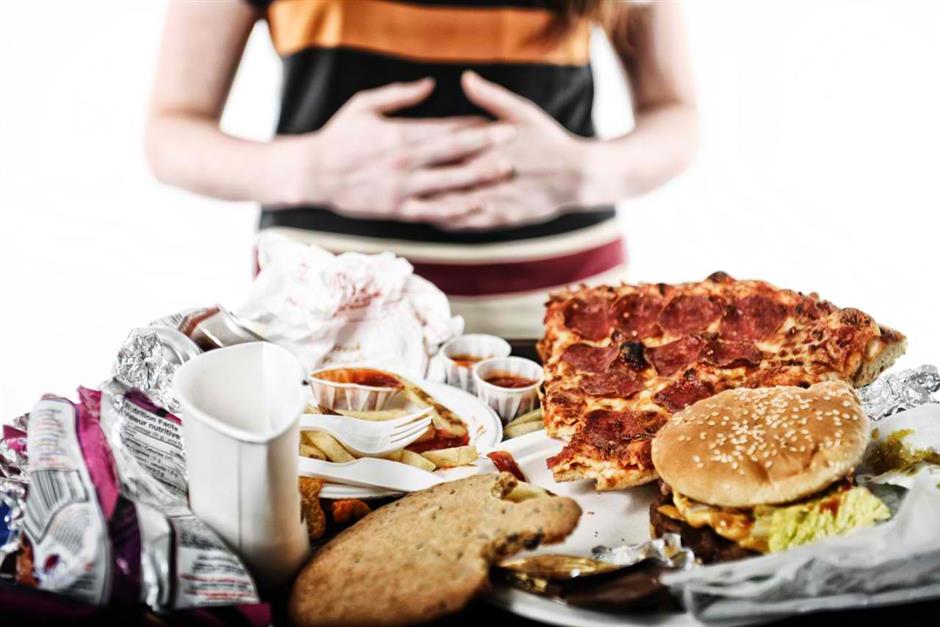 Obesity is just one example of how TCM seeks to treat a certain disease by going beyond the superficial "symptoms" or "causes" – such as "I've eaten too much" or "I've worked too hard" – to restore the health of a larger mechanism – for example the digestive system.

Without a vision for something deeper behind superficial obesity, one may only resort to eating less or exercising more. While these efforts do help reduce fat, they cannot completely cure obesity if it's caused by a weakened spleen, liver, gallbladder or stomach – weakened by an unhealthy lifestyle or depressed mood.

In this sense, TCM is not only a medical science. It naturally lends itself to a healthy way of life that's away from disorder or depression. That's why Shanghai Municipal Hospital of Traditional Chinese Medicine has cooperated with Jing'an Library to offer a series of public lectures that run throughout the year.

"If health science is compared to a pyramid, disease treatment is only the top, while lifestyle constitutes the vast base," said Zhang Ruijie, a medical scientist.

He graduated from Shanghai University of Traditional Chinese Medicine and went on for doctoral study in Western medicine in Japan. He once worked as an expert at the International Union for Health Promotion and Education. Now he plans to create "a TCM culture village" in western Shanghai to promote a healthy lifestyle based on the TCM philosophy of balance and harmony.

In Linjiacun Village, Qingpu District, he has designed a mini museum of TCM culture with the help of students from the Shanghai Institute of Visual Arts.

The museum will be part of a public art space covering 1,000 square meters. Construction was well underway when I visited the village for an interview with Dr Zhang on June 3.

"It's always my dream to spread TCM culture and help more people lead a healthy life," he said. "Disneyland is enjoyable, but a TCM village is great."

Besides designing the mini museum, he said he has invited a number of world champions in the sports field to open their workshops in the village, where they will train people with various skills in cooperation with TCM doctors and scholars who know how to help trainees cultivate a sense of balance and calmness in a most competitive environment.

A forest of Chinese medical herbs is also taking shape in the village. "When children come for gardening, they will also be able to learn the medical uses of different parts of a plant."

The best thing about a TCM culture village, he said, is that it can be duplicated in other villages, where an open landscape and low skyline are amenable to meditation on the harmonious relationship between man the microcosm and the universe the macrocosm – a relationship accentuated in Chinese medical wisdom.

"Huangdi Neijing," or "The Yellow Emperor's Inner Canon," China's earliest medical book, points out that the greatest doctor does not cure diseases after someone falls ill; he prevents people from falling ill in the first place, by championing a way of life in harmony with oneself and with the outside world.

It's the way we live every day, every hour, that makes or breaks our health. 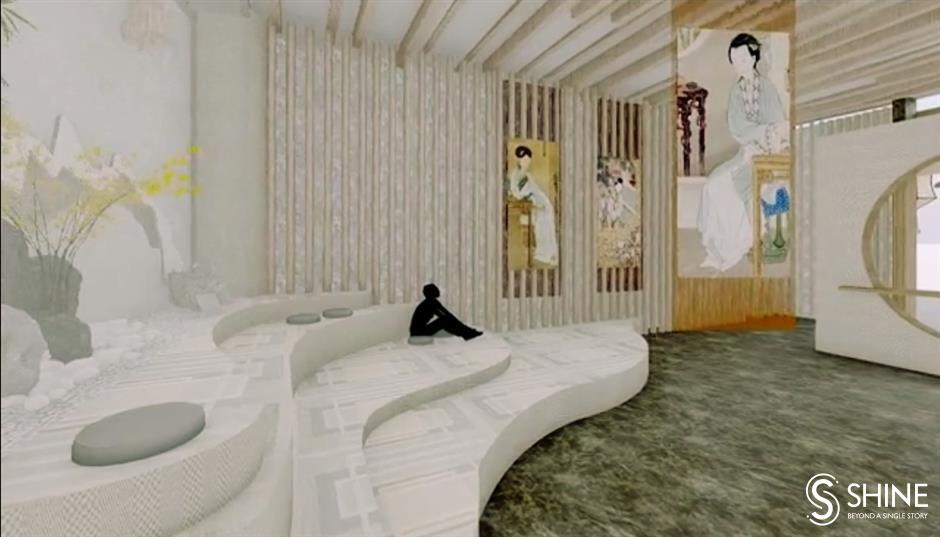