Sci-tech companies bask in the glow of the STAR Market

Shanghai's STAR Market, which marked its second anniversary on July 22, has proven to be a popular and successful channel for investors to buy shares in the future of science and technology, such as advanced semiconductor chips, vaccines, green cars, cloud computing, artificial intelligence and robotics.

The Nasdaq-style market, officially named the Shanghai Stock Exchange Science and Technology Innovation Board, is now home to over 300 companies, which have raised about 380 billion yuan (US$58.8 billion) in initial public offerings.

Chip designer Shanghai Fudan Microelectronics is a recent example of the market success. Its share price surged eightfold on its August 4 debut. The company was already listed on the Hong Kong exchange.

The company, which started out as a laboratory at Fudan University and went corporate in 1998, raised 747.6 million yuan by issuing 120 million shares priced at 6.23 yuan each. They closed their first day of trading at 55.9 yuan. 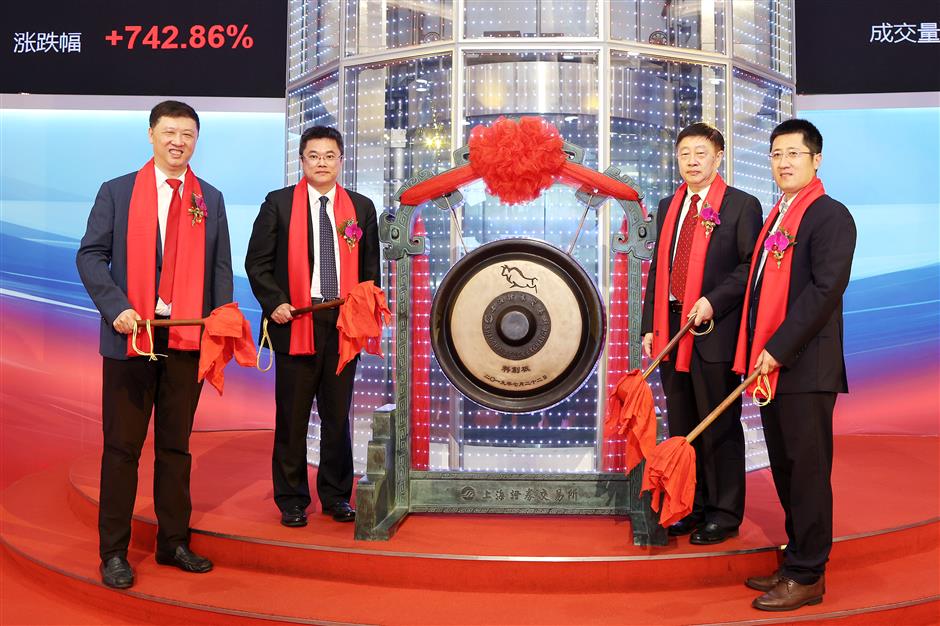 Fudan Microelectronics leaders post with a bell in the Shanghai Stock Exchange hall during the listing ceremony.

The Chinese government authorized the creation of STAR Market to provide a fundraising channel for creative companies in vanguard sectors of science and technology.

On its second anniversary, the market's value was estimated at around 4.95 trillion yuan, accounting for about 5 percent of all Chinese mainland-listed stocks. Companies related to major technology industries accounted for almost 75 percent of all firms listed.

Just over a third of companies are engaged in the new generation of information technology, such as cloud computing and artificial intelligence. Biotechnology companies account for 23 percent of listings.

In announcements to-date of first-half results, 67 of 100 companies predicted growth in operations.

It's not just the strength of companies like Fudan Microelectronics that mark the first two years of STAR. The market itself is undergoing changes to strengthen its performance.

STAR plowed new ground by allowing startup companies without profitable balance sheets to go public. It also has conducted a trial program allowing companies to list through a registration system rather than the usual approval procedure of vetting by stock regulators.

In April, China's securities regulators stipulated that research and development employees must account for 10 percent of staff in companies seeking IPO on STAR. It has also banned IPO by companies related to finance or real estate and signaled that STAR will become the first mainland board to introduce a market maker system to provide more liquidity.

In a recent guideline supporting further development of the Pudong New Area, China also announced it would pioneer a new program on STAR, allowing qualified foreign institutional investors to use yuan to participate in stock offerings.

With the Pudong-related policy support and the long-term strategy to build Shanghai into a global financial center on par with New York and London, the STAR Market's "position and essence in the capital markets will be significantly improved," according to Dongxing Securities.

Moreover, with Chinese technology IPOs under tighter scrutiny in markets like New York, STAR is well positioned to attract more of those listings, analysts said. 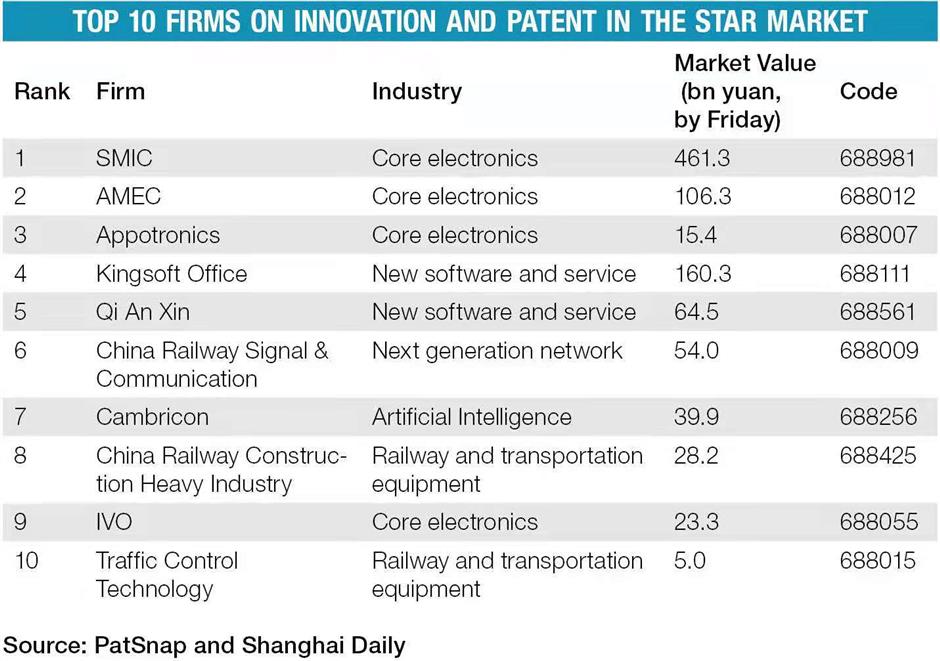 STAR-listed firms have shown themselves at the vanguard of innovation, receiving 16,300 new patents in 2020, according to the Shanghai Stock Exchange.

Kingsoft Office, the No. 2 STAR-listed firm, a company aiming to break the monopoly of Microsoft Office in China, spent 711 million yuan on research last year, accounting for a third of its revenue. It has a research team of 1,923 people.

Fudan Microelectronics spent 490.5 million yuan, or a third of its revenue, on research in 2020. It employs a research team over 800 people.

Another star on STAR is CanSino Biologics, which is producing one-shot COVID-19 vaccines in Shanghai. The company said its annual production capacity will hit about 200 million units.

In addition to the STAR 50 Index, another index for the market will debut on August 16. It will track share performance in the information technology sector.

The new index, called the STAR Next Generation Information Technology Index, or STAR Next Generation IT, will cover the performance of 50 companies with relatively high market value and businesses in fields such as next-generation information networks, electronics, emerging software and cloud computing, big data and artificial intelligence.

The success of the STAR Market is gaining international recognition.

Swiss-based seed and pesticide firm Syngenta plans to list on the market in the first group of international company to sell shares in Shanghai.

Global index compiler MCSI has announced the inclusion of several new stocks listed on the STAR Market in its indexes, which will take effect later this year.

As of February, companies listed on the STAR Market could be included in the "stock connect" trading program that links mainland exchanges with Hong Kong. Stock connect provides a channel for overseas investors to gain access to mainland stocks.

In May, KraneShares unveiled the first ETF in Europe tracking the STAR 50 index. It's listed on the London Stock Exchange.

﻿
Special Reports
﻿
61905
,
61938
,
62420
,
Shanghai dining: the thrill and challenge of finding a place to dine out
Livestreamers on the carpet: Be careful what you do and say
Tight job market doesn't daunt a new force in the workforce
F&B entrepreneurs try to regain foothold post-lockdown
Pudong Expo shifts to metaverse tech to attract Gen Z visitors
Pudong exhibition hall one of the hottest shows in town
Snip! A burgeoning business is nipped in the bud by coronavirus
Your voices heard: Grassroots liaison in lawmaking proves its value
Shanghai online shoppers lead nation in 618 spree
Pudong's futuristic 'City Brain' can foresee the future
EXPLORE SHINE