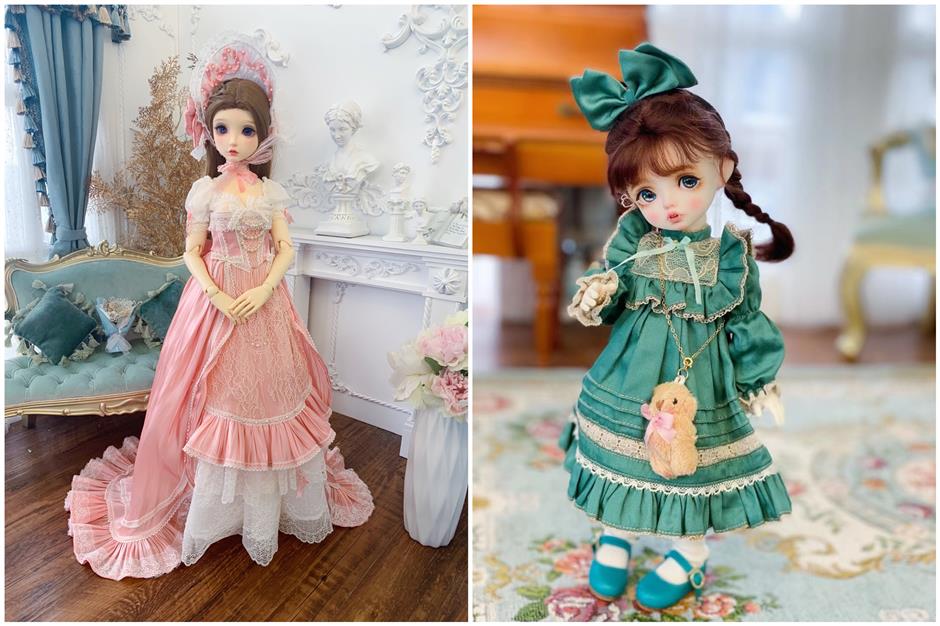 If you think dolls are just the playthings of little girls, think again.

A woman who goes by the nickname A Yuan is 26 and she collects dolls. Indeed, she owns a whole family of them from brands like Dollfie Dreams, Smart Dolls and Obitsu. She says they bring color into an otherwise "boring" life.

A Yuan and others like her call themselves "doll mothers." In their minds, the dolls are not toys but rather parts of their families.

A 25-year-old "doll mother" who identified herself only as Alkaid told Shanghai Daily she has owned dolls for eight years.

"For me, they are somewhat like my children," she said. "I design personalities, makeup and settings for each of them," she told Shanghai Daily. "I see them as unique in the world and would never resell them."

Besides buying clothes for her dolls, she takes them out for photo shoots and exhibition visits, and write stories for them. She celebrates birthdays she has chosen for them.

"My mother supports my hobby and often goes with me to the park where we take pictures of my dolls," Alkaid said. "She also accompanies me to the annual doll exhibition Shanghai Dolly Paradise and gives me dolls as birthday gifts."

Yang Lin, 27, is new to the ranks of "doll mothers." She took up the hobby last year.

"I put the dolls in my office and change their clothes to match the seasons," she said. "Sometimes I take the dolls with me on business trips. Each doll has a unique style." 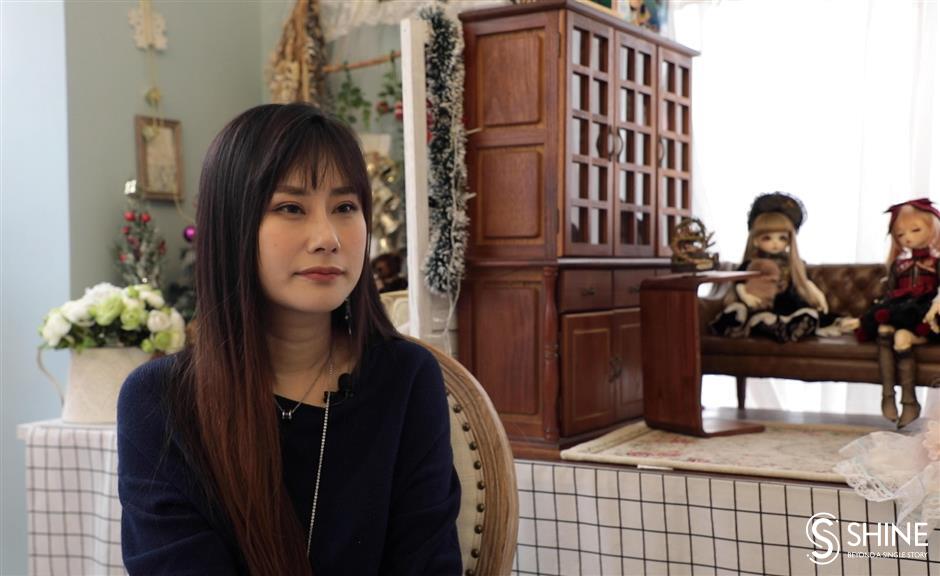 Lan sits in front of the backdrop scenes she created for customers to take pictures of their dolls in her Bluemoon Dollhouse.

It turns out doll-collecting is a gender-free hobby.

Xiao Ming, 32, is a "doll father" and former art student from Harbin. He said he acquired his first doll, which he named Xue Mi, in 2009.

"The dolls give me spiritual comfort," he said. "After graduating from university, I stayed in Beijing for a period. It was an extremely lonely time for me. Sometimes the only communication I had with other people was a 'thank you' to a supermarket cashier. My dolls saved me. They were like Robinson Crusoe's Friday."

He said he bought his first two dolls with pocket money given to him by his grandfather. After his grandfather died, Xiao Ming preserved the dolls in boxes to commemorate the old man.

Dolls are becoming big business. In Shanghai, one of the favorite shops for "doll mothers" is Bluemoon Dollhouse on Hongqiao Road. It's one of the few brick-and-mortar retailers in an industry conducted mostly online.

Inside the shop, dolls are everywhere. They line shelves and sit in display cabinets.

Store owner Lan Yue, 38, says she was introduced to the world of dolls when a friend bought a "ball-jointed" doll and showed it to her in 2005. 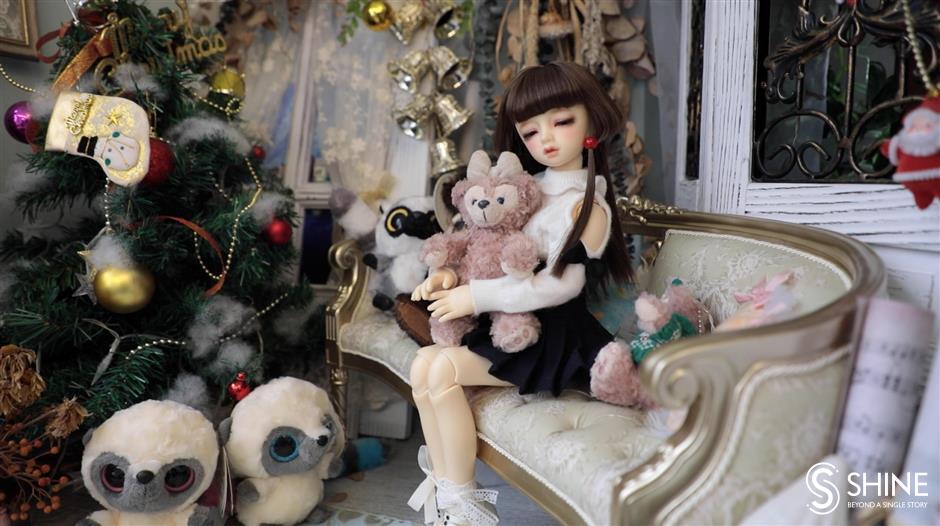 A doll "naps" with a stuffed toy in a setting created by Lan's shop.

That doll variety refers to one that has socket joints, allowing it to sit and make various gestures. Modern Asian dolls of this type were generally made of resins and were first produced in 1999 when Japanese company Volks created the Super Dollfie line of dolls.

This level of doll collecting didn't come cheap. Super Dollfies cost thousands of yuan, with some full sets selling at more than 10,000 yuan (US$1,544). And ordering them from Japan in the era before easy online shopping was complicated.

"The doll had exquisite makeup and wore fancy dress," she says. "All her joints could move to make different gestures."

Lan bought her first doll from domestic doll maker Doll Zone. She designed the doll's clothes and makeup. Soon she was chatting online with other doll collectors. Her passion became a business when she quit her job on a magazine and opened a shop specializing in dolls and all their related paraphernalia. 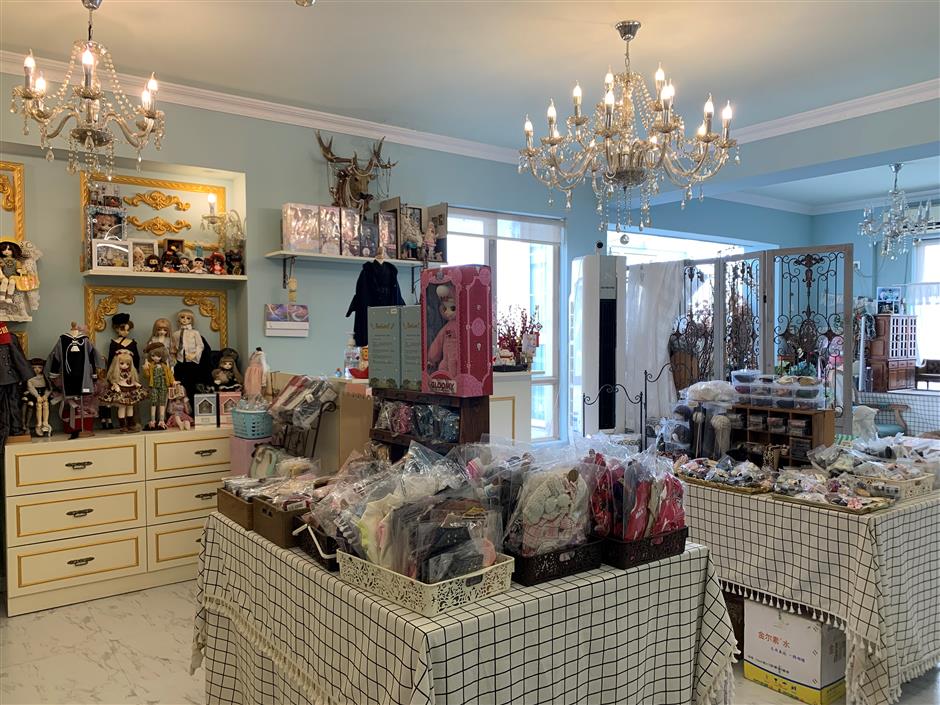 Some accessories are placed in the middle of the store for customers to easily pick up.

Dolls are generally considered one of mankind's earliest toys. Wooden paddle dolls were found in Egyptian tombs as early as the 21st century BC. Dolls with movable limbs and interchangeable clothing date back to at least 200 BC, and stories from ancient Greece told of little girls playing with dolls in AD 100.

There are endless varieties of dolls, like rag dolls, voodoo dolls, Russian nesting dolls and Barbie-style fashion dolls. There are equally endless materials used to make them – wood, corn husks, PVC, rubber, porcelain, leather and paper mache, among others.

Dolls come in all sizes. A ball-jointed doll can be as tall as 65 centimeters or as small as 11cms.

"I found the location, decorated the shop and contacted different doll brands to become an authorized agent," she said. "I posted ads online."

The shop has become popular. On weekends, there are even queues outside.

"I have made a lot of friends from the shop," Lan said. "We often hang out together, go for a meal or do karaoke. The shop doesn't bring in big profits and the work is tiring, but I enjoy it all." 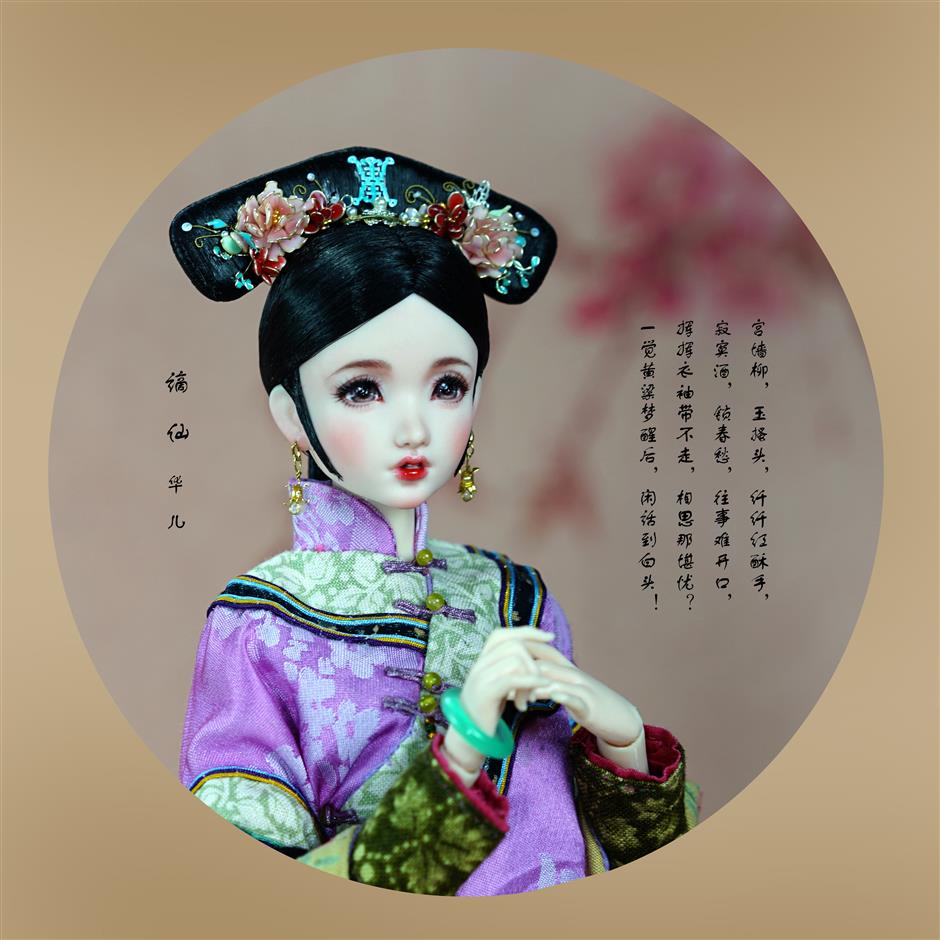 A Bel-Eve doll in traditional Chinese dress from the Qing Dynasty.

Lan had to relocate her shop several times – once due to street redevelopment. She chose her current location in a commercial building to keep costs down and weed out gawkers. She sells both online and offline.

"It's a good hobby," Lan said. "Many doll owners learn about making up and designing clothes for their dolls. They also learn something about photography from taking pictures of them."

Raising dolls is full of imagination and the pursuit for beauty, she says.

"When designing clothes for a doll, you are building dreams," Lan explains. "A human being's appearance is restricted by nature. But dolls have infinite possibilities."

Her clientele includes some grandmothers and also foreign customers who hear about her shop from online forums. 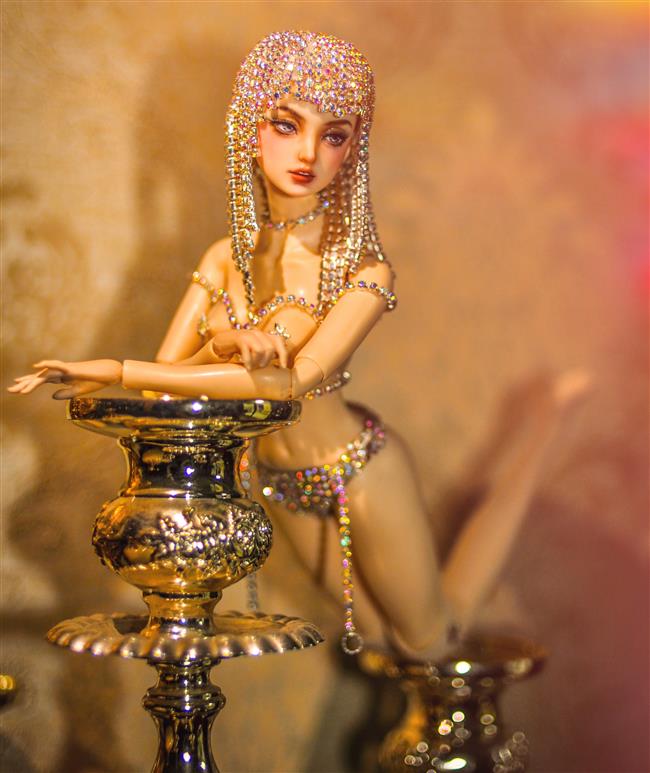 A Bel-Eve doll is dressed in luxury clothing.

Dolls tend to reflect the countries that make them in appearance and clothing. Until recently, the most popular dolls were foreign, sporting the clothing of, say, Japan, South Korea or Western cultures. But that is changing. Domestic doll makers are producing dolls with definite Chinese attributes and clothing.

Makeup artist Hei Zhu Ren is part of the new wave of chinoiserie dolls. She has created the Bel-Eve Doll brand.

Her dolls have graceful bodies and look like feitian, or the "flying goddess" found in the frescoes of Dunhuang's Mogao Grottoes. The dolls have the updo hairstyles of ancient Chinese women and wear traditional Chinese clothing.

Hei said she fell in love with dolls when she was an undergraduate and began collecting them. When their numbers grew beyond her ability to afford accessories, she began making them herself.

But Hei didn't like the body shape of Obitsu dolls and wanted a more Chinese version. She said she couldn't find quite what she wanted, so she created her own. 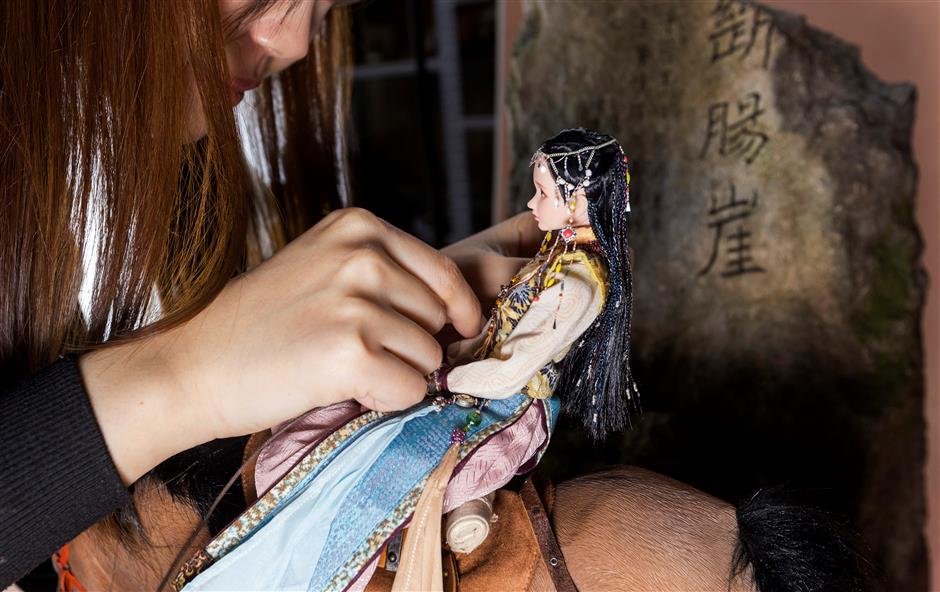 Her Bel-eve Doll comes in various themes, like the Silk Road and Dunhuang feitian series.

Elsewhere in the industry, Hangzhou-based Angell Studio is continuing its series of dolls themed on the 24 solar terms, dolls drawing on concepts from China's Classic Mountains and Seas, and Glorious Life dolls of ancient Chinese figures like the Tang Dynasty Princess Taiping.

Shenzhen-based Loong Soul Doll has lines from Ancient Legends, Chinese Gods and 28 Lunar Mansions. It also works with popular Chinese video game producer JX Online 3, designing a doll based on one of its characters.

"It's a good to see that," said doll owner Xiao Ming. "Now, we doll lovers have more choices. In the past at doll exhibitions, you found most Western-style clothing or Japanese kimonos for dolls. But now, we have Chinese-style clothes, fashionable ones." 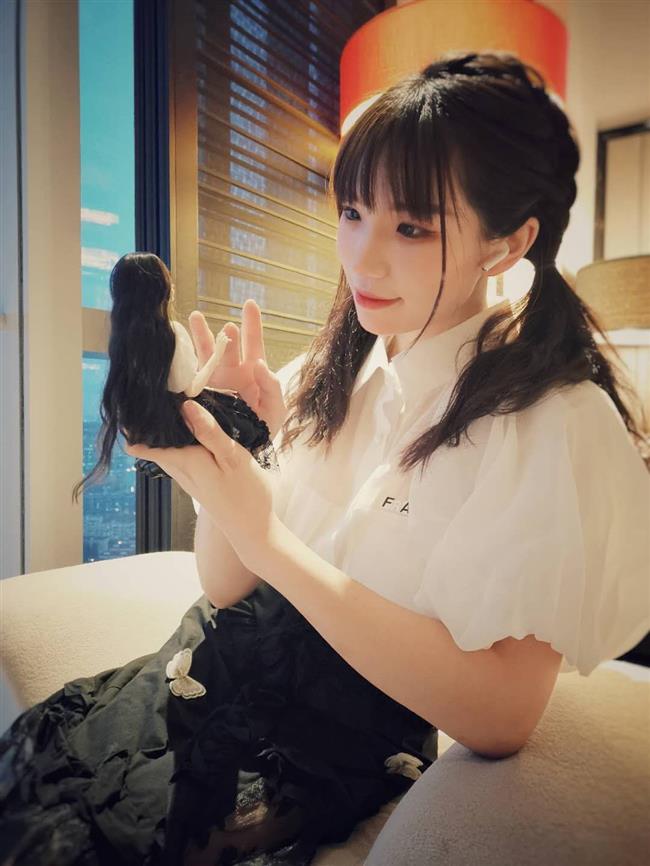 A doll mother and her Bel-Eve doll are in similar dresses.