Growing use of a 'cancerous snack' prompts government crackdown 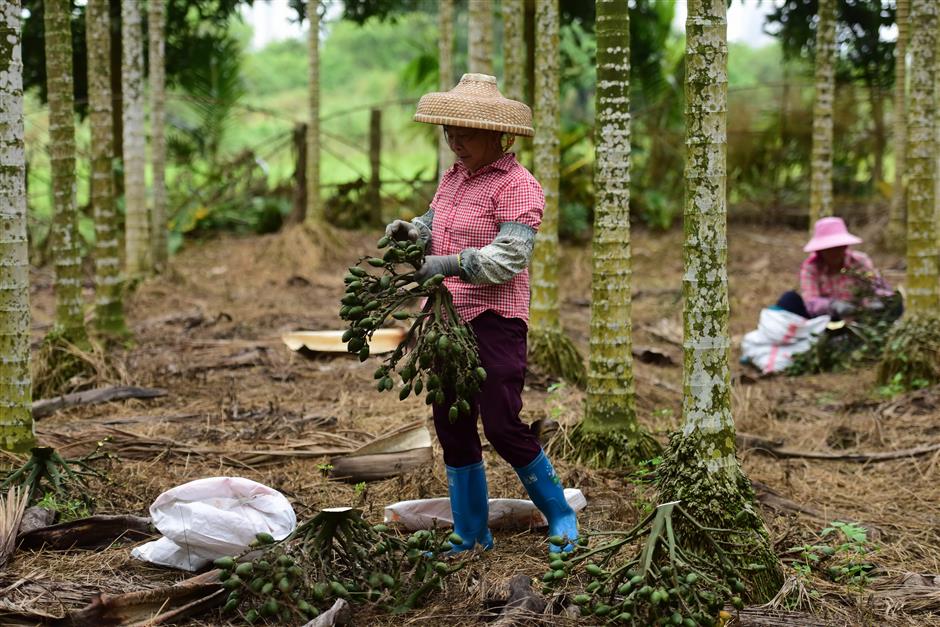 China has banned the promotion of betel nuts, the addictive seeds of areca palm trees, on television, radio and online programs because of their cancer-causing risks.

Called betel or areca nuts, the stimulant is considered the fourth most addictive substance in the world after tobacco, alcohol and caffeine. Some have called the habit the world's "most neglected" public health problem.

The National Radio and Television Administration last week banned betel nuts from media advertising or promotion. The action came the after the stimulant, usually chewed in dried form by people as a kind of snack, began showing up more frequently on TV screens this year.

Variety show "Street Dance of China" featured a short play promoting the nuts, and during the recent Lantern Festival gala, Hunan Satellite TV regaled the nuts for their ability to "put you in good spirits and make you feel rejuvenated."

Chewing betel nuts is widespread through Asia, and its popularity in parts of China seems unabated. By 2018, there were more than 60 million Chinese chewing the nuts, and the number is believed to be still growing. 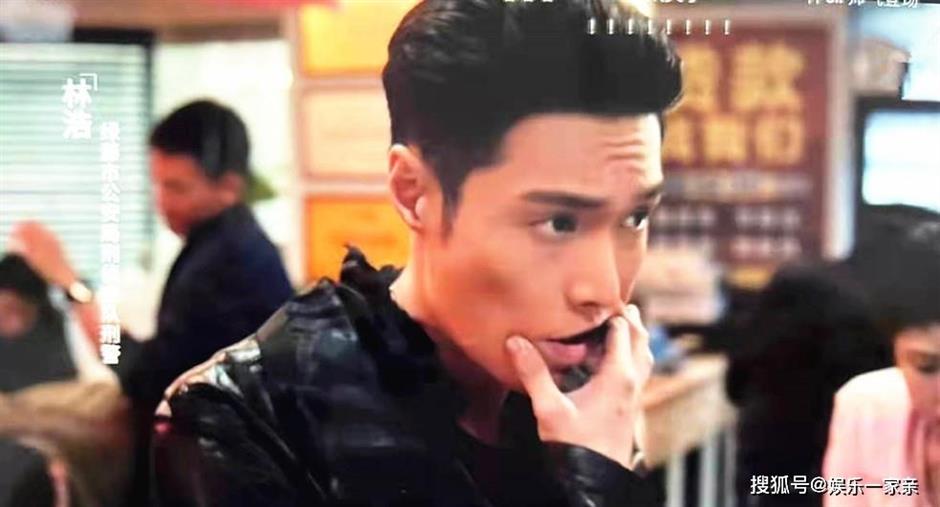 Betel nut is marketed in Shanghai, but there are no estimates on the extent of its use in the city.

Enos, an imported-foods shop near the intersection of Weihai and Maoming roads in Jing'an District, displays a whole shelf of betel nut products, ranging in price from 20-100 yuan (US$3-15) a bag. The brands are from Hunan Province, where chewing betel nuts is commonplace. 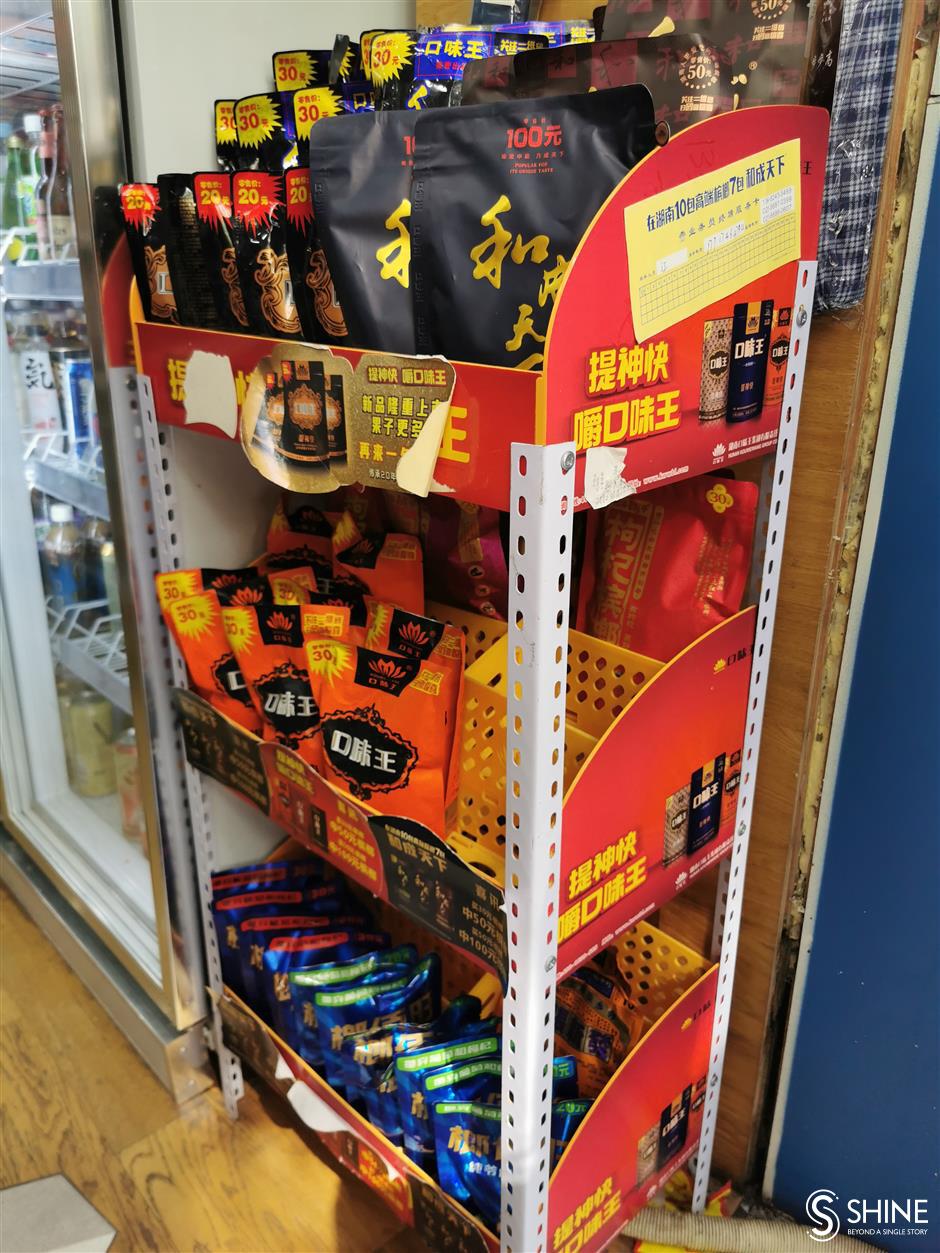 Enos, an imported-foods shop near the intersection of Weihai and Maoming roads in Shanghai's Jing'an District, displays a whole shelf of betel nut products.

A shop assistant told Shanghai Daily dozens of bags are sold every month, mostly to men. Free samples are offered to customers to try.

Several of the products bear small-print labels warning people that betel nuts can be harmful to health if chewed too often.

The new ban on media advertising or promotion was generally welcomed in online social media comments, though many netizens expressed doubts that it would stop a cultural habit deeply ingrained in parts of China.

The nuts, which contain arecoline, an addictive chemical similar to nicotine, are commonly combined with the betel leaf, spices and sometimes even some tobacco to form a common chewing wad called betel quid. 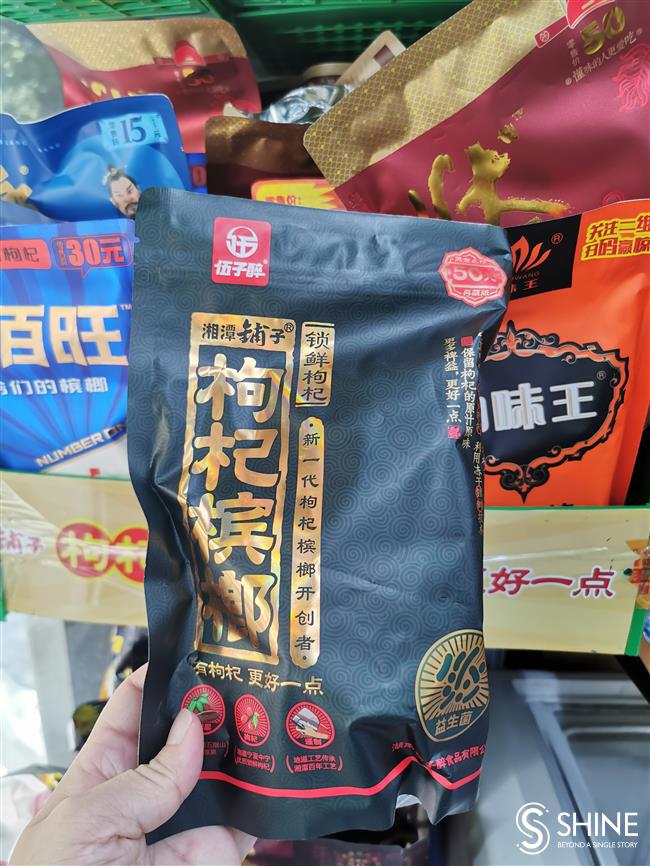 As far back as 2003, the International Agency for Research on Cancer, a group sponsored by the World Health Organization, reported sufficient evidence that chewing betel nuts can cause cancer in humans. Long-term use can lead to dental ulcers, gum degeneration and cancers of the mouth and esophagus.

The nut is illegal in Turkey because it contains arecoline, an addictive chemical similar to nicotine. The Consulate-General of the People's Republic of China in Istanbul, Turkey, announced last month that several Chinese travelers, including some Taiwanese, entering Turkey with betel nuts had been arrested.

In China, chewing betel nut is most rife in more southern provinces, like Hunan, Hainan and Guizhou. Hainan is home to more than 90 percent of China's areca palms.

Hunan is the biggest consumer of betel nuts, known as binlang in Chinese. A report in China Business Times estimated the value of betel nut production in the province in 2017 at 30 billion yuan and growing.

According to historical records, betel nuts were introduced into the region more than 300 years ago. In traditional Chinese medicine, the betel nut was used to deworm bodies, aid digestion and ward off cold.

The nuts are so embedded in the social culture of Hunan that they were even listed as a provincial-level cultural heritage in 2016.

But health warnings have taken some of the shine off the stimulant.

Two years ago, the Hunan Betel Food Industry Administration banned all advertising of betel quid, but it had little effect in curbing booming sales. 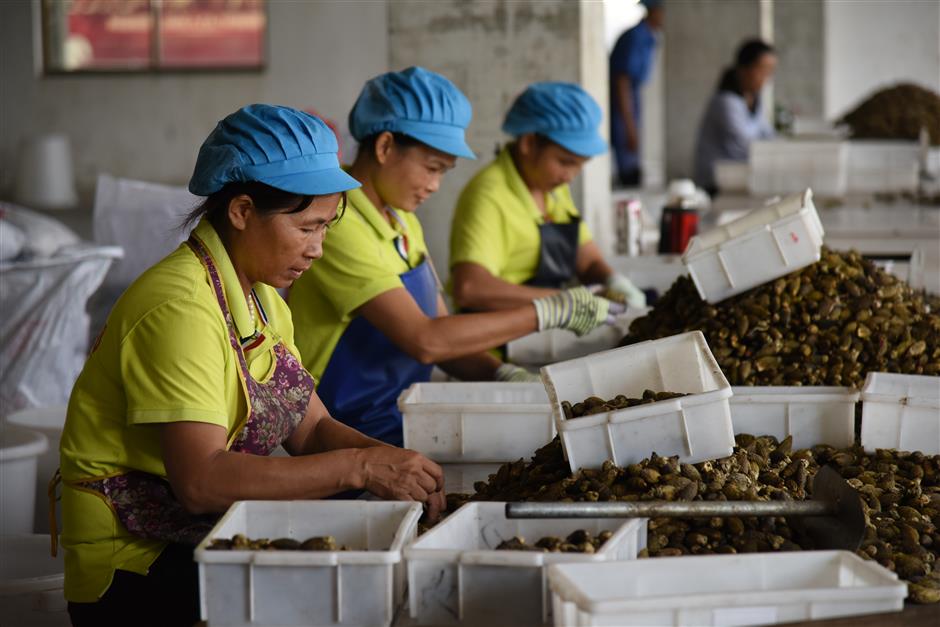 Use of the stimulant has spread in China, with ads for betel nuts now appearing on streets of other provinces.

Betel quid is often smartly packaged and includes ingredients like wolfberry, coffee, raisins and sesame, making it look like a snack with rich nutritional benefits.

Despite health warnings, betel nuts are chewed by almost a 10th of the world's population, according to a BBC report. The nuts give users a "buzz" equivalent to six cups of coffee and have been touted as a cure for indigestion and impotence.

Cultivation and indeed prices for areca nuts in parts of Asia have been soaring.

In China, many attempts have been undertaken to stop trade in the nuts. The city of Xiamen in Fujian Province banned the production, sales and consumption of the nuts in 1996, while Guangzhou in neighboring Guangdong Province prohibited outdoor advertising last March.

In 2013, a report entitled "Face-Cut Man in the Kingdom of the Areca Nut" disclosed the harmful risks of chewing betel nuts, followed by a documentary of the same name. 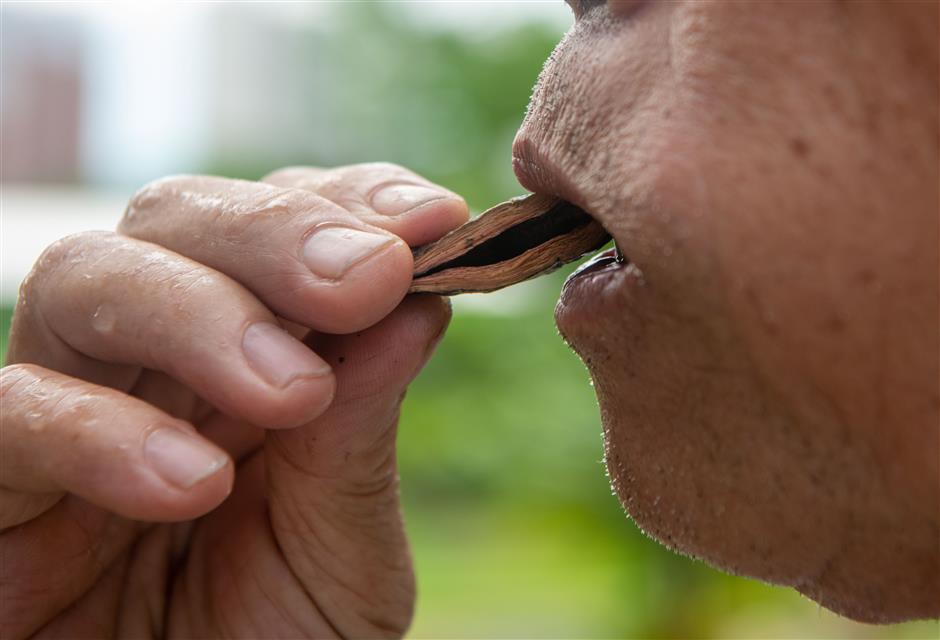 It cited the case of user Liu Sangguo, 43, as an example of the risks. He was diagnosed with mouth cancer and had part of his face removed by surgery. A year later, the cancer reappeared and spread to his lungs and brain. He was shown in a hospital bed in Hunan, barely able to squeeze words out.

"It's all the fault of betel nuts," said his wife Tang Na, weeping before the camera.

Several recent reports suggest that betel nut users are becoming younger. According to Guizhou Daily, betel quid, which sells for between 5 and 100 yuan per bag, is a popular snack among the younger generation in the Guizhou Province capital of Guiyang.

A survey of 1,305 pupils and middle school students in the Hunan city of Xiangtan found that nearly 70 percent of the respondents admitted they had tried betel nuts and 8.4 percent of them said they chew them every day.

More recently, some netizens in Shanghai claimed that they could find betel quid at grocery stops, even near schools. Some of the products came in cute packaging featuring a panda, they said.

The Maoming Road N. area in Shanghai has several shops selling betel nut products. The owner of Xinkuaike Supermarket on the road said many stores in the city sell betel quid. Most of her customers, she said, are men fond of drinking and smoking.

On Shengping Street, a lane near Maoming Road N., another grocer displayed betel quid prominently on a front shelf. A woman working in the shop said a salesman had placed the products there and the store sometimes sells a bag or two. 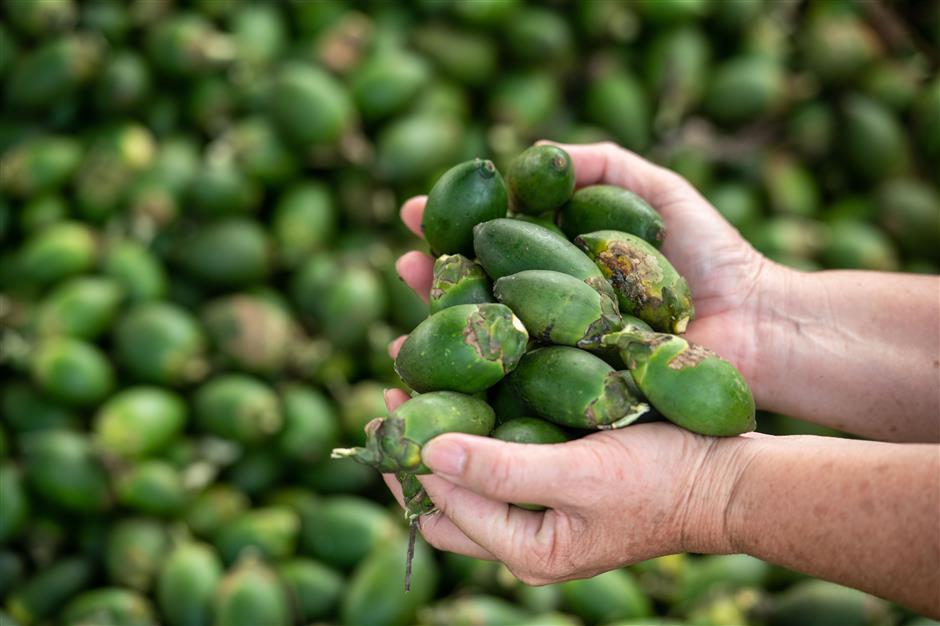 Many people don't like their first experience with the stimulant, which initially causes pressure in the chest and a quickened heartbeat. The alkaloids contained in betel nuts trigger a feeling of being "refreshed" within five minutes, producing an effect that can last for two to three hours. Many users become hooked.

Over years of use, the stimulant can expand the size of a person's cheeks, cause the lower jaw to protrude and turn the teeth black. A freshman at a music school in the city of Wuhan, who chewed betel quid for less than half a year, reported difficulty opening his mouth.

Online comments about the new media ban mostly support tighter controls, but several comments said betel nuts aren't any more dangerous than smoking. One netizen expressed doubt that the ban would have much effect in a place like Hunan, where use of betel nuts is so widespread and accepted.

A Weibo microblogging platform user who goes by the screen name "Brother Yu," posted in July that he was quitting betel nut use.

Yu, who lives in the Hunan city of Yongzhou, said he started chewing betel nuts in middle school and had maintained the habit for nearly two decades.

There's no ads for cigarette, but people still smoke.

He told Shanghai Daily that he used to habitually go through three bags of betel quid a day, but then he scaled back his use to those occasions when he was stressed about overtime work or in an unsettled mood.

"The price keeps growing," Yu said. "In the beginning, when betel quid was popular only in Hunan's Xiangtan and a few areas in Changsha, the price was 1 yuan a bag. But nowadays, a bag of some quality betel quid costs 20 to 30 yuan, and one of premium quality can cost up to 50 yuan."

He said there are even some brands selling betel quid for as much as 500 yuan a bag.

A man named Xiao Tian in the Hunan city of Huaihua said he uses betel nuts once in a while, but many people around him chew them all the time. He said he didn't think the ban would have much impact.

"There's no ads for cigarette, but people still smoke," he noted.

In 2019, Ding Xiaobing, a deputy to the National People's Congress, proposed cancer warnings on packages of betel nut products.

Professor Jian Xinchun at Xiangya Hospital in Changsha, capital of Hunan, has called on the central government to outright ban the production, use and sales of betel nut products. Barring that, there should be a public information campaign to expose the risks of cancer, he said.