Innovative solutions for chamber pot households in 'loo' of relocation 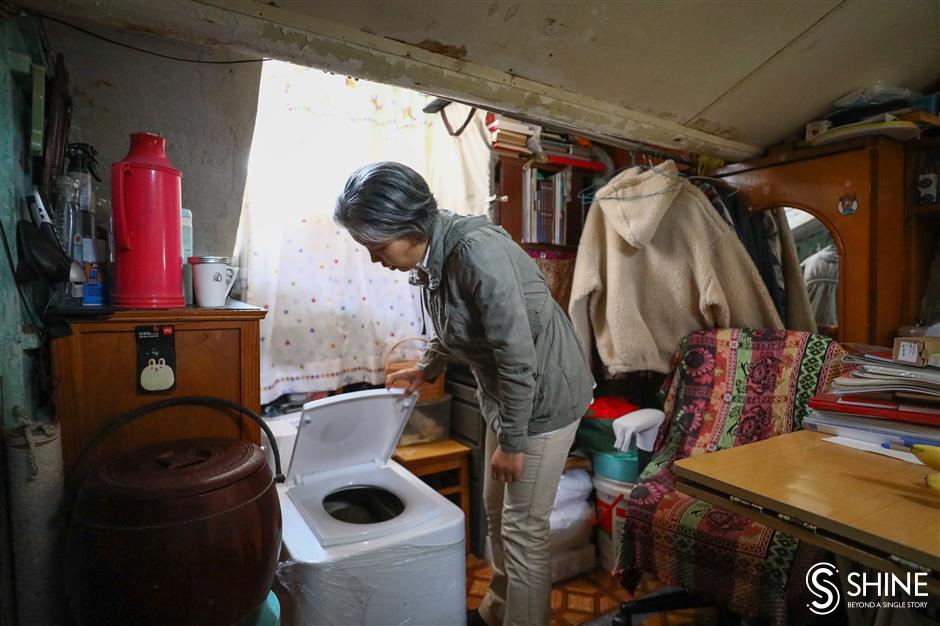 Wei Hui inspects the newly installed bio-degradation toilet, which requires no water or pipes, in her loft-style home.

After using the toilet in her tiny loft apartment, Wei Hui pressed a button. Rather than making a flushing sound, the toilet began heating up and stirring the matter, emitting a low beeping noise.

About two hours later, the excrement had been dissolved into black soil and wood. It was broken down by numerous micro-organisms in the toilet.

The biodegradation toilet, which requires no water or pipes, is among a batch of innovative toilets being installed in households in Shanghai's downtown neighborhoods, which still rely on chamber pots.

Biodegradation toilets like Wei's have been installed in about a dozen households at 174 Jinxian Road, five minutes' walk from the bustling Huaihai Road M. It is a pilot scheme for the city's last round of "chamber pots elimination campaign."

Chamber pots have auspicious meaning in traditional Chinese culture. The pots, called zisun tong, or offspring pots, are still an essential dowry for brides in many southern Chinese regions.

However, they also mean misery and trouble as they are one of the most typical sights in old alleys in Shanghai.

Every morning, emptying and cleaning the chamber pots is routine and essential. The heavy, smelly chamber pot has become a sign of an out-of-date lifestyle in some downtown shikumen, or stone-gate, neighborhoods.

Ji Zi, 77, has spent most of his life in an old, cramped old lane-style house in downtown Huangpu District.

An enamel chamber pot with traditional peony patterns, once a common household commodity for most Shanghai families, has sat in a corner of his home for decades. 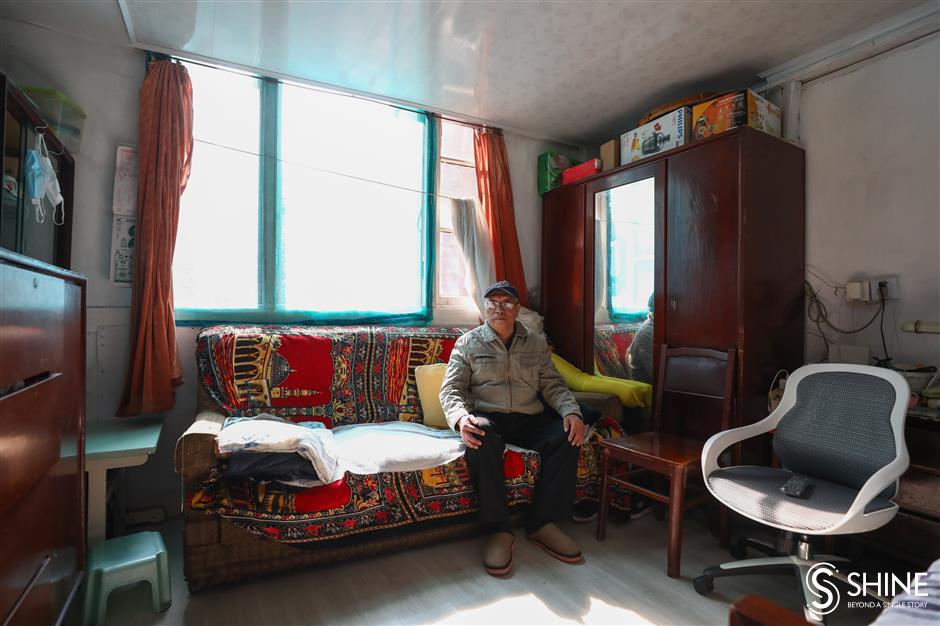 Ji Zi, 77, watches television in his apartment, where a new toilet has been installed in the corner.

"It is terrible in summer when neighbors begin emptying their chamber pots in the morning," Ji said. "I'm awakened by the strong smell."

He was born in the apartment which is about 15 square meters. He lives there with his wife and son. A loft with a low ceiling was built to create an additional bedroom.

"My son would rather rush to the nearest public bathroom than use the chamber pot at home," Ji recalled.

Such suffering has ended since early this year, because a flush toilet has been installed despite the limited space.

With customized design and accurate planning, the toilet only occupies 1 square meter in the corner of the apartment. The stairway to the loft has been adjusted to create additional room.

Though the sewerage pipe had to be placed on the ground since neighbors living downstairs refused to provide space for the pipeline, Ji said the apartment "has never been better than now" in over seven decades.

It is taboo in traditional culture to allow a toilet pipe to run above the sitting or bedroom, especially over the dining table.

"The toilet is the most satisfying thing through my entire life," said Ji.

Ji was assigned to support the development of the Xinjiang Uygur Autonomous Region when he was young and returned to the city after retirement.

He suffered a stroke several years ago and was confined to a wheelchair. Using a chamber pot became a challenge, let alone emptying it on his own.

But he still keeps the antique chamber pot, which has accompanied him for over half a century, beside the toilet, mainly as a sign of nostalgia. 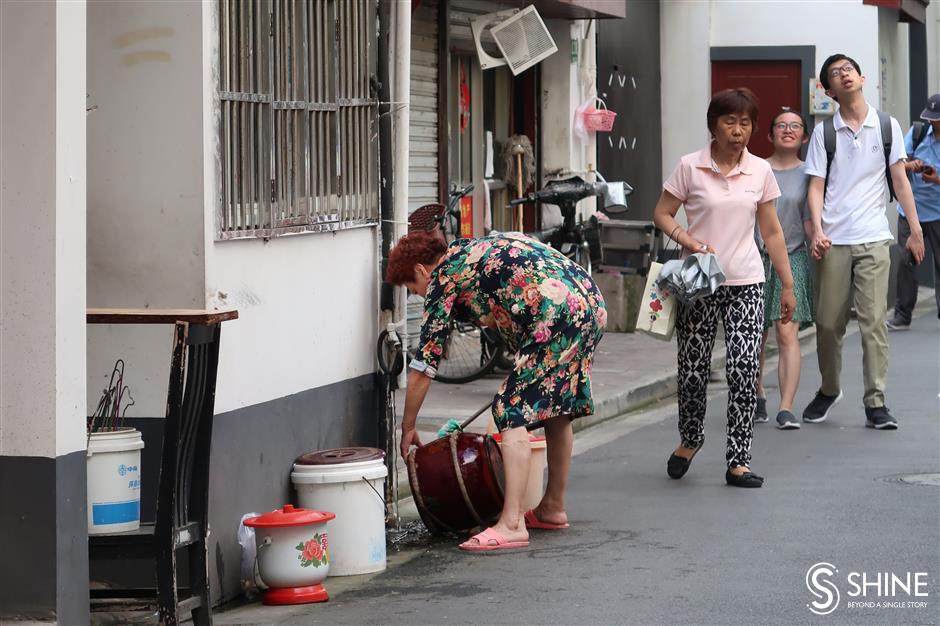 A resident cleans a chamber pot in the city's old town.

There are still about 1,800 households, mainly in the city's old town area in Huangpu District, which are using chamber pots, because of the shortage of essential sewerage pipelines and limited living space.

Most of the residents living in the old residential houses without toilets have been relocated under the city government's jiugai (meaning renovation of old residential communities) campaign.

It has become a primary solution to improve living conditions, remove shantytowns and redevelop the region to help spur the city's economic growth.

For the remaining neighborhoods which are scattered around downtown areas, the city government has launched another campaign, making the elimination of the chamber pots the primary target.

"Some subtle and gradual urban renewal projects are being conducted to improve the living conditions of those excluded from the relocation plans," said Yao Kai, director of the Shanghai Housing and Urban-Rural Development Commission.

Different kinds of toilets have been installed with customized plans for each household, the district's housing authority said.

The lack of water input and output pipes in some old neighborhoods is the key challenge for toilet installation.

An electric toilet has been installed in another pilot scheme to solve such problems. With an electric pump, sewage can be delivered to a pipeline installed in a higher place outside the house to avoid digging through the neighbor's apartment. 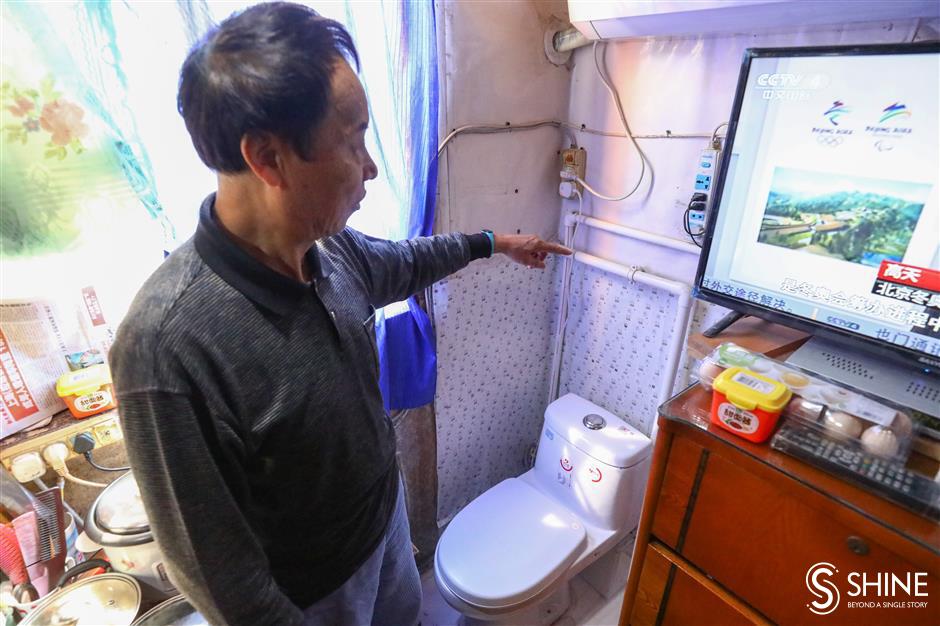 The husband of Shi Zhili next to a newly installed electric toilet right beside the dining table.

The first toilet of its kind has been installed for a physically challenged couple living on the second floor at the 225 Jumen Road community.

"We finally do not need to climb up and down to empty the chamber pot," said Shi Zhili, 65.

Shi used to work in a state-owned textile mill in Xietu Road with her husband. The couple was delighted when the company assigned the apartment to them in 1986, when chamber pots were still common in the city.

However, emptying the pots later became a daily curse because the retirees had to climb up and down the steep and creaking wooden stairs multiple times a day, regardless of the weather and temperature.

"We've applied for over a decade, but all the engineers said there was no solution for the condition of our apartment," Shi said.

Chen Liang, an engineer with the Lichen Property Management Co, introduced the electric toilet, which can liquefy the excrement before flushing it through a narrower sewerage pipe.

"We've made multiple experiments to combine the electric toilet with a pump," said Chen. The combination is expected to be promoted, considering the complicated housing layouts in the old town.

The biodegradation toilets are being installed in households in poorer conditions. It only requires a gas pipe and a temperature control device to ensure the working efficiency of the micro-organisms.

Wei said the performance of the "high-tech" toilet has been beyond her expectation.

"It generates no smell or noise, even during the city's plum rain season," said Wei.

She said the toilet was installed in time to make it more convenient for her daughter, who is about to take part in the national college entrance examination next year.

The daughter had to climb up and down to empty the chamber pot herself sometimes, which wasted a lot of valuable time for study. 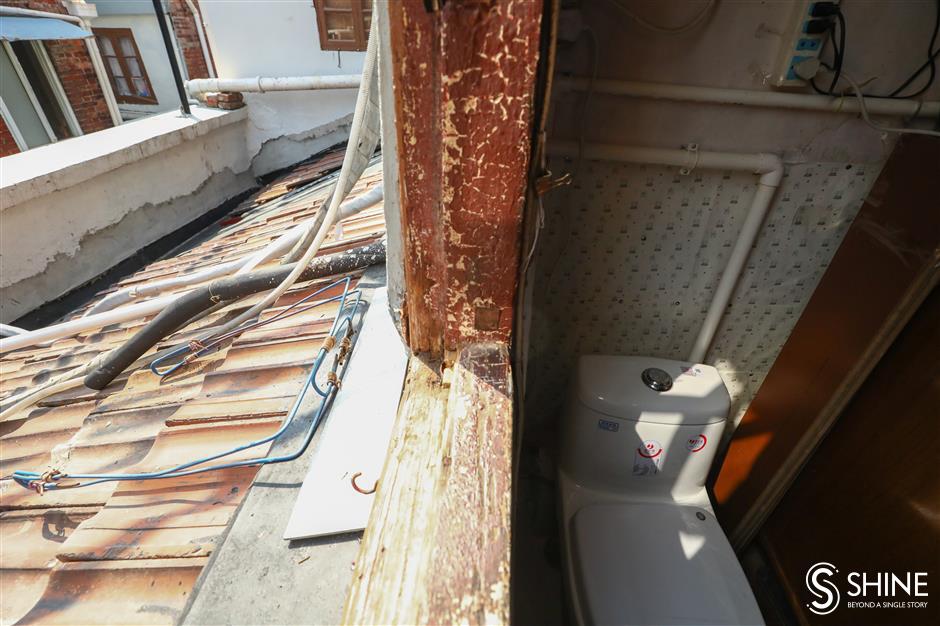 Waste water is pumped to an outside pipeline installed at a higher level.

Despite the poor living conditions in the loft which is only 10 square meters, her daughter is enrolled in the Gezhi High School, one of the best in the city's downtown.

The district's housing authority has also integrated the toilet installation campaign into the house repair and renovation projects.

A public toilet-bathroom shared by two households has been created for a nearly century-old new lane-style neighborhood on Beijing Road along the Suzhou Creek.

The housing authority renovated an abandoned utility room into the toilet-bathroom, where residents can also take a shower.

The public kitchen has also been renovated with newly painted walls and ground tiles.

"I am unwilling to be relocated now with the new toilet and kitchen," said Zhang Li, 59, who has lived in a 17-square-meter apartment with her parents and two sisters for decades.

"Walk southward, I can shop at the Nanjing Road Pedestrian Mall, eastward I can easily reach the Bund and the Suzhou Creek waterfront is right behind my backyard," Zhang said.

"What better location can I find in Shanghai," she added. 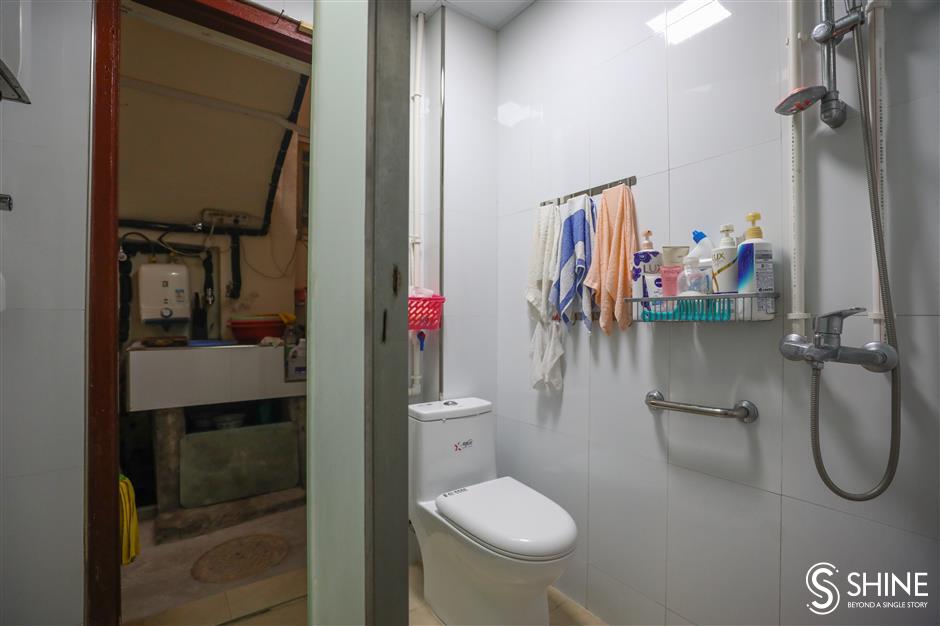 A former utility room public has been converted into a toilet-bathroom.