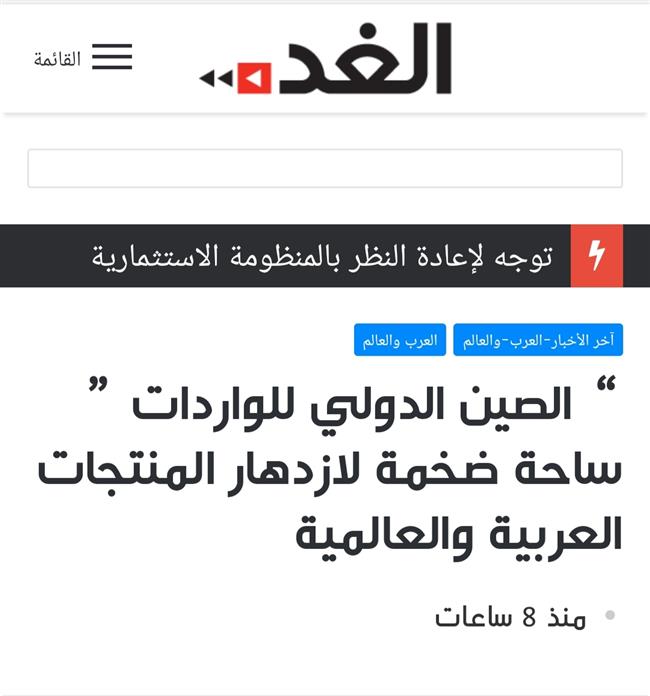 Within a short period of time, distinguished Arab products such as the Damascene rose, olive oil, dates and oranges, and even Arab companies specializing in the fields of logistics and service trade, were able to take tangible steps toward the Chinese market and establish their roots in this large market over the past three editions of the China International Import Expo.

With the continued development of global value and supply chains, businessmen in the world see that the exhibition is a platform that works to weave integration between global economies, as well as an incentive for all participating countries to work jointly to push the volume of multilateral demand in the market, to reach the ultimate goal of strengthening mechanisms for sharing benefits globally.

A question may come to mind as to why the CIIE is needed? The answer from the point of view of the Syrian businessman Tariq al-Shayeb, whose firm's products are being displayed at the expo for the fourth time, lies in the fact that the Chinese market has enormous potential and that the expo, in turn, helps many foreign companies a lot and is the best way for new brands to attract the attention of Chinese customers and enjoys organizational efforts and promotions by the Chinese government. Al-Shayeb expects tangible results for this session and a good acceptance of the new products he presents.

Lebanese businessman, Amir Badr Hassoun, pointed out that the exhibition plays a major role in the development of exports to China and deepens the communication between businessmen participating in it from different countries and their counterparts in China, and contributes to the re-development of the movement of trade, import and export to and from China, highlighting the importance of trade cooperation between Arab countries, the Middle East and China, which he said is due to the fact that "China is one of the most important consumer markets."

Qiu Shuwen, an expert at the Shanghai Institute of Global Governance and Regional Studies, stressed that from the perspective of the high-quality joint construction of the "Belt and Road," the exhibition has become an important platform for countries along the way to display their national image, economic and trade development achievements and specialized products, including the Arab countries. 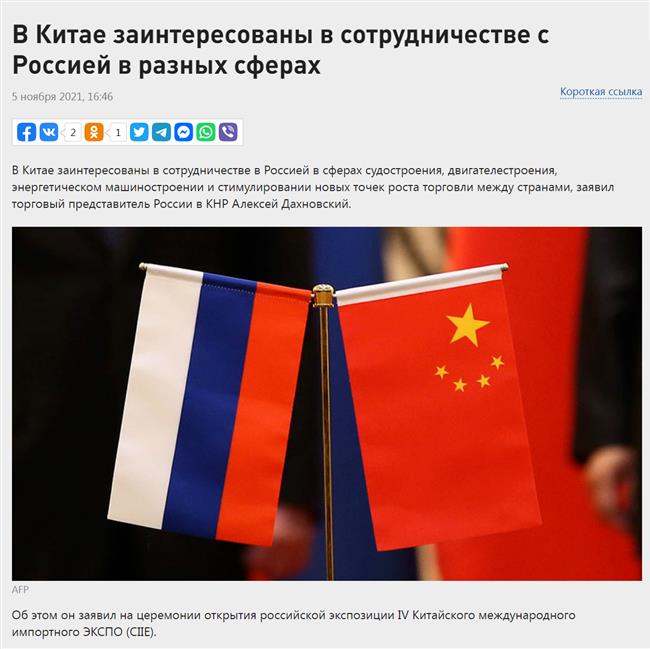 China is interested in cooperation with Russia in shipbuilding, engine building, power engineering and stimulation of new points of trade growth between the countries, said Russian Trade Representative to China Alexei Dakhnovsky.

He was speaking at the opening ceremony of the Russian exposition at the 4th China International Import Expo.

"Chinese partners are interested in stimulating new points of growth in Russian-Chinese trade, which, I do not hesitate to note, had already passed the substantial mark of US$102 billion by volume in the first three quarters of 2021," Dakhnovsky revealed. 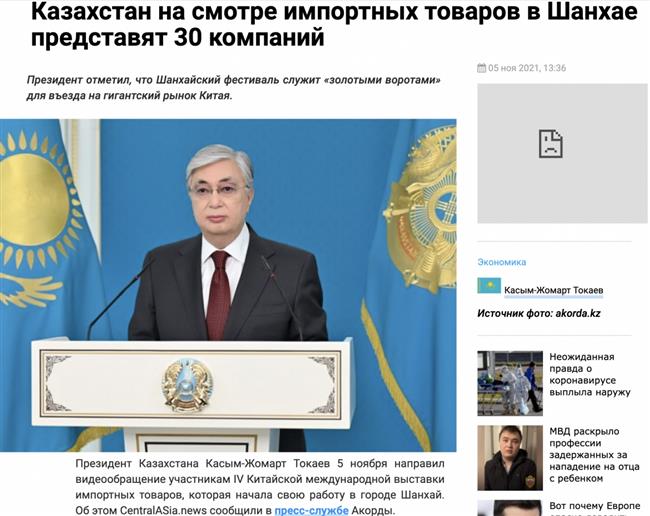 On November 5, President of Kazakhstan Kassym-Zhomart Tokayev sent a video address to the 4th China International Import Expo, which kicked off in Shanghai, according to the official website of President of The Republic of Kazakhstan.

The president noted that the international exhibition of imported goods, by its very nature, is a center that brings together advanced exporters within its business space. The representative geography of the CIIE was more than 120 countries and regions, and this is a clear example that the Shanghai expo serves as a "golden gate" through which one can enter the huge Chinese market, the president stressed.

The head of state said that 30 largest domestic producers will present their demands at this international podium. Kazakh entities are expected to conclude contracts for exports of food and agricultural products worth at least US$100 million. 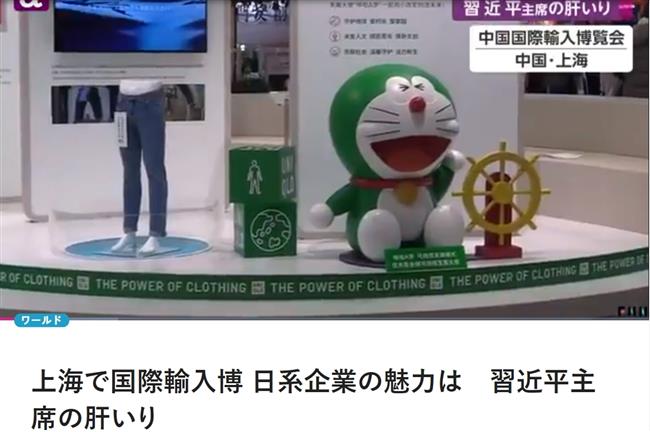 The keyword of the 4th China International Import Expo lies in "Environment" perhaps because it has coincided with the 26th UN Climate Change Conference of the Parties (COP26) held this year.

In line with the goal of COP26 – putting up with global warming countermeasures – President Xi Jinping said in his keynote speech at the opening ceremony of the 4th CIIE that "China will deeply engage in international cooperation on green and low-carbon development and the digital economy."

Many sustainable products focusing on environmental measures appear at the exhibition, including a green Doraemon to show the idea of environmental protection.

Major Japanese automakers are promoting their efforts to reduce carbon dioxide with the latest electric vehicles and hydrogen fuel cell vehicles. Panasonic has set up an "environmental booth" in 2021 with the theme of utilizing hydrogen and other substances. Uniqlo has launched jeans that can reduce the amount of water during processing by 95 percent or more. 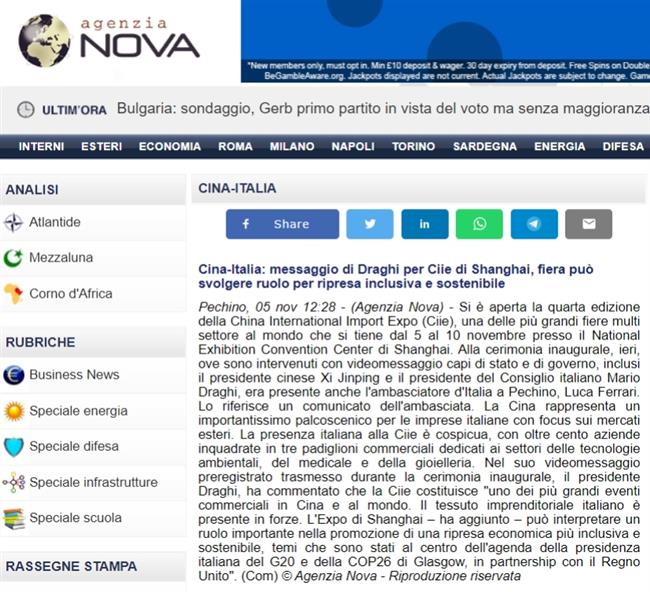 The fourth edition of the China International Import Expo has opened, which is one of the world's largest multi-sector trade fairs, in Shanghai.

Draghi commented that the CIIE is "one of the largest trade events in China and the world. The Italian entrepreneurial fabric is present in force."