Changing attitudes toward disability, one vlog at a time

At the end of 2021, two videos evaluating the worst and best experiences of barrier-free facilities in Shanghai received a lot of attention on the video-sharing platform Bilibili.

The uploader, Zhao Hongcheng, 31, is a wheelchair-user woman who was born in Shaoyang City in central China's Hunan Province. She was diagnosed with poliomyelitis at the age of 1. She currently lives in Shanghai. 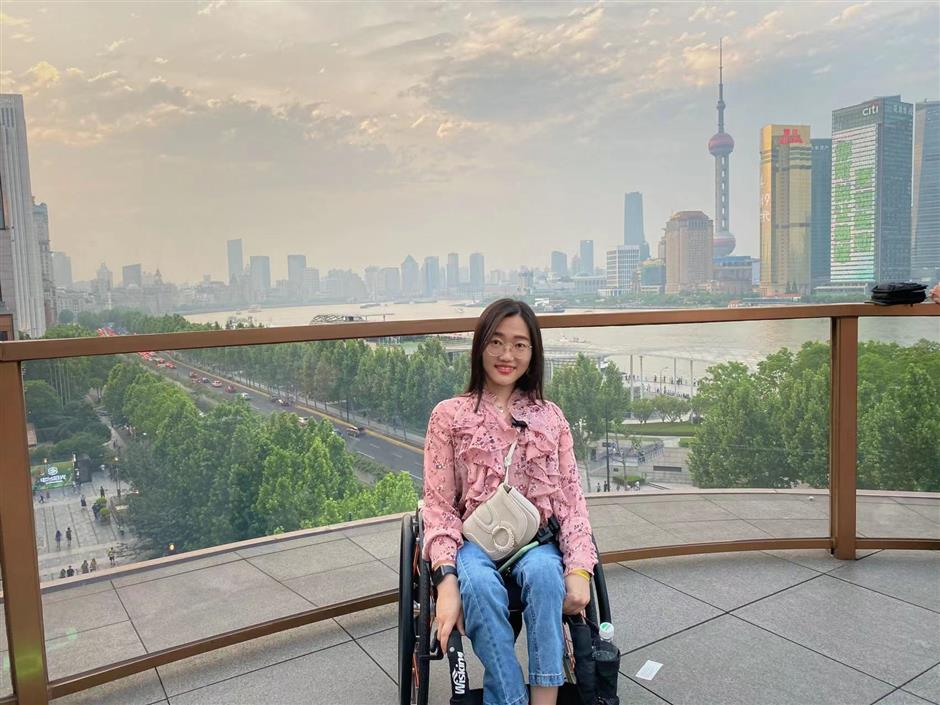 Zhao Hongcheng, a 31-year-old vlogger on the video-sharing platform Bilibili

Zhao became a vlogger in early 2019 with the username "Dachengzi Haomeimei" and found fame after uploading a video of a trip to Guangzhou. In two days, the video had been viewed more than 2,000 times.

As a full-time blogger now, she has released 65 videos and shares her daily life with her nearly 76,000 followers. More importantly, she tries to assist persons with disabilities and help them better integrate into society.

In one of her posts, she narrated her experience at Tsutaya Books in Shanghai. The bookstore would not allow strollers and wheelchairs inside and demanded that they should be stored "at the front desk."

After waiting outside the store for over ten minutes in the hope that someone from the store would help them out, Zhao's boyfriend Xie Lipeng went inside to negotiate with the manager.

Eventually, they were allowed in but it left a sour taste with Zhao.

"Do you think everyone sitting in a wheelchair can stand up after entering the store? Each one of us wants to play and have fun. So why is it a mistake on my part?" she commented. 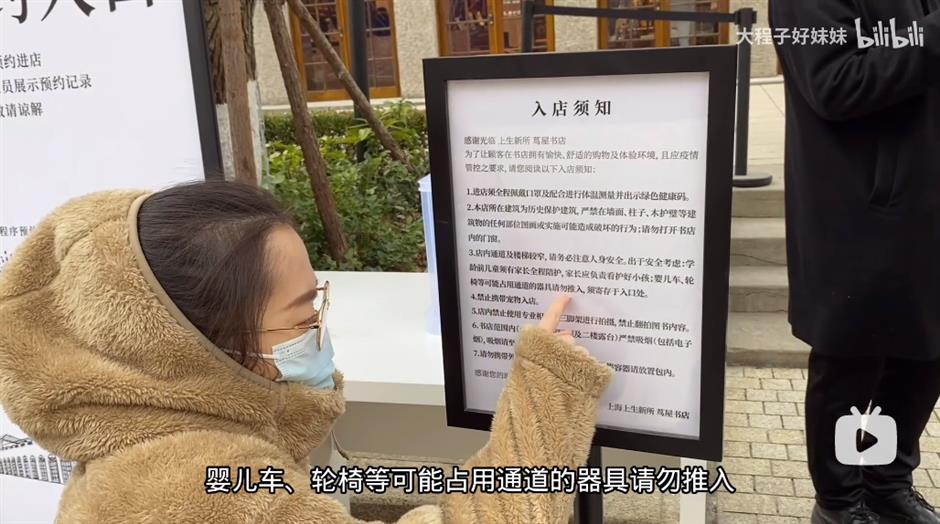 A screenshot in Zhao's video.

She narrated another incident, this time at the prestigious Bund One Art Museum. Zhao and Xie were told that because it was crowded on weekends, they would not be allowed in. This was despite the fact they were selling concession tickets for people with disabilities.

Again, they managed to get in but felt like "outsiders."

On December 6, Zhao received a message on her Weibo account stating that Tsutaya Books had improved facilities for wheelchair users.

A notification at the entrance of the bookstore now reads: "People with strollers and wheelchairs, please pay attention to safety. Ask shop assistants for help if necessary." 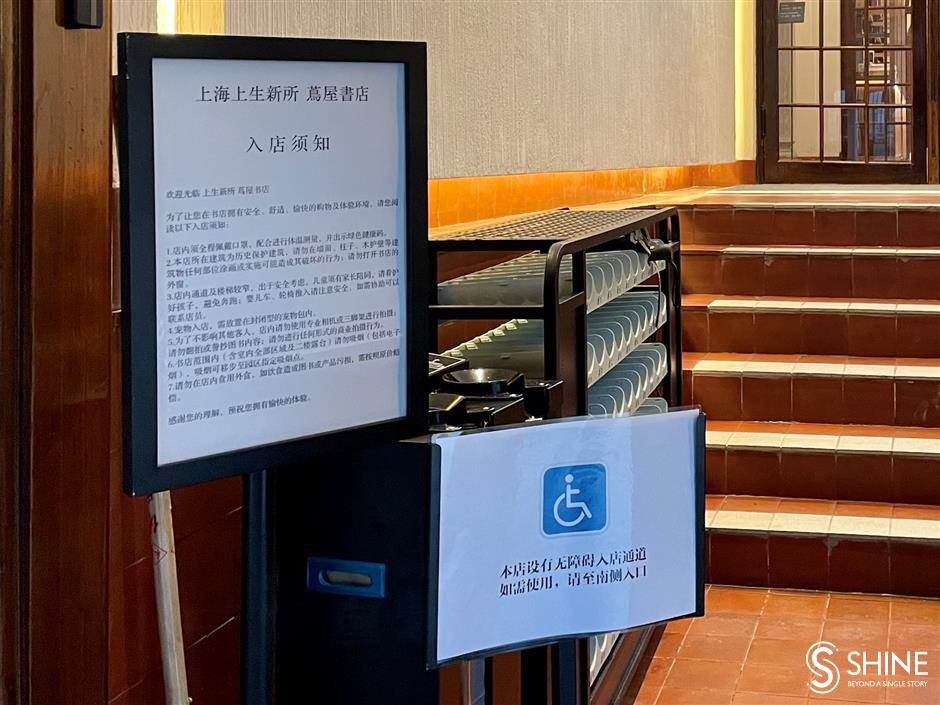 New notifications at Tsutaya Books state clearly there is a barrier-free passageway for wheelchair users. 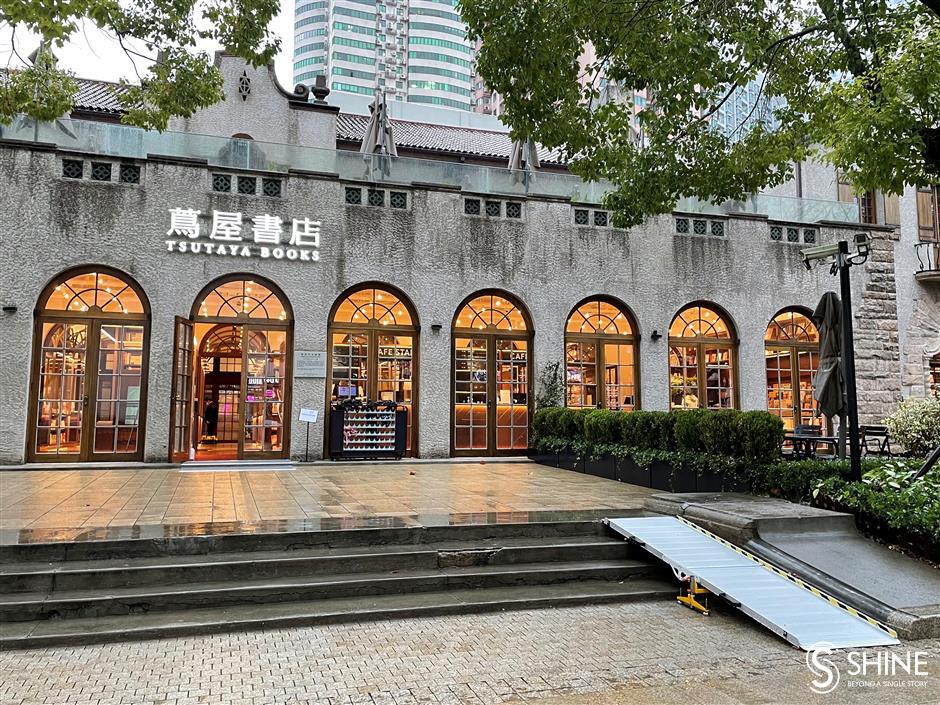 The newly-constructed barrier-free facilities outside the store.

But Zhao also stated she felt the warmth of the city and went on to post videos of her "three best experiences" in the city.

"I would give Shanghai 7-out-of-10 marks," Zhao told the Chinese-language Shanghai Morning Post.

Zhao was impressed with the facilities and services at the Shanghai Natural History Museum and Museum of Art Pudong.

ET Stage found a special mention in the videos. It wasn't particularly well-equipped with facilities for persons with disabilities but the helpful staff members won her over.

Zhao moved to Shanghai in August 2019 to work with Meituan. She uploaded a video of her taking a bus in Shanghai. Although the bus had facilities to deal with disabled people, the driver wasn't trained and took a long time to get her onto the bus.

The video was viewed nearly 160,000 times but nothing more came out of it. Zhao was told to write to Shanghai municipal government's proposal collection office. She got a prompt reply which led to better training of bus staff in dealing with people with disabilities. 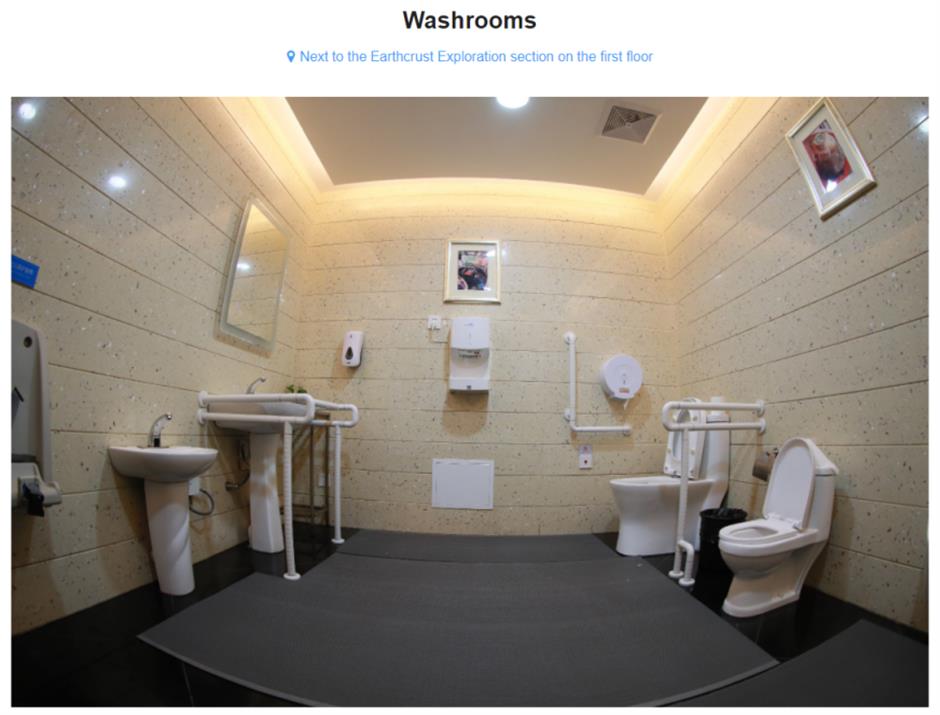 Shanghai has been trying to improve barrier-free facilities since the 1980s, the most recent being a regulation released in June 2020.

At the Shuicheng Road Station, on Metro Line 10, there are maps and information in Braille for students at the nearby Shanghai School for the Blind. An "Accessibility Guide Manual" was released in 2020, and includes information for visually impaired, deaf and mute and physically challenged passengers. 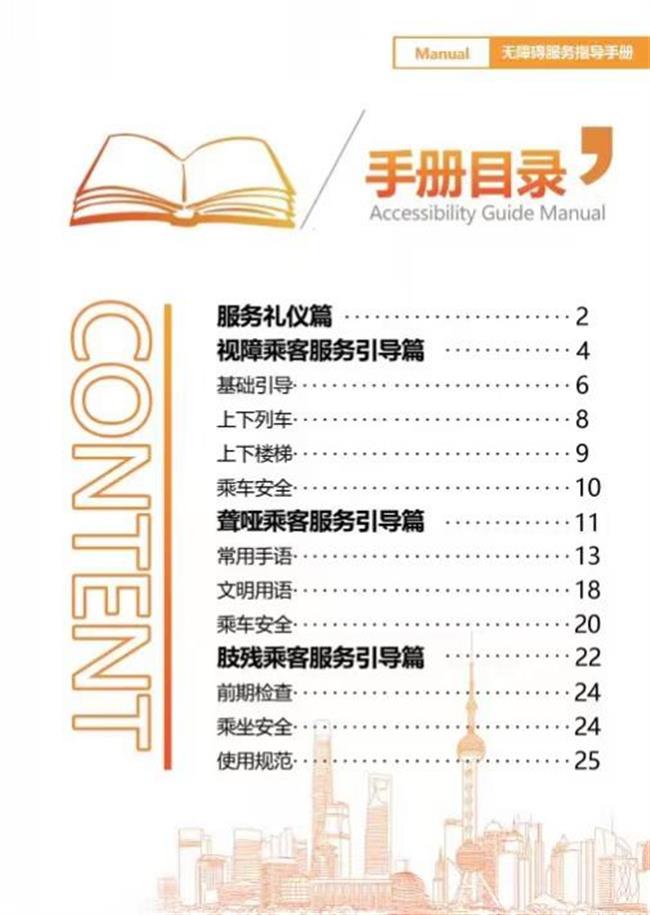 Last week, 10 new electric buses were introduced in Jiading District. Most of the passengers on the routes are elderly people. The buses have low-floor entry and the drivers are trained to help passengers onto buses and put on safety belts. 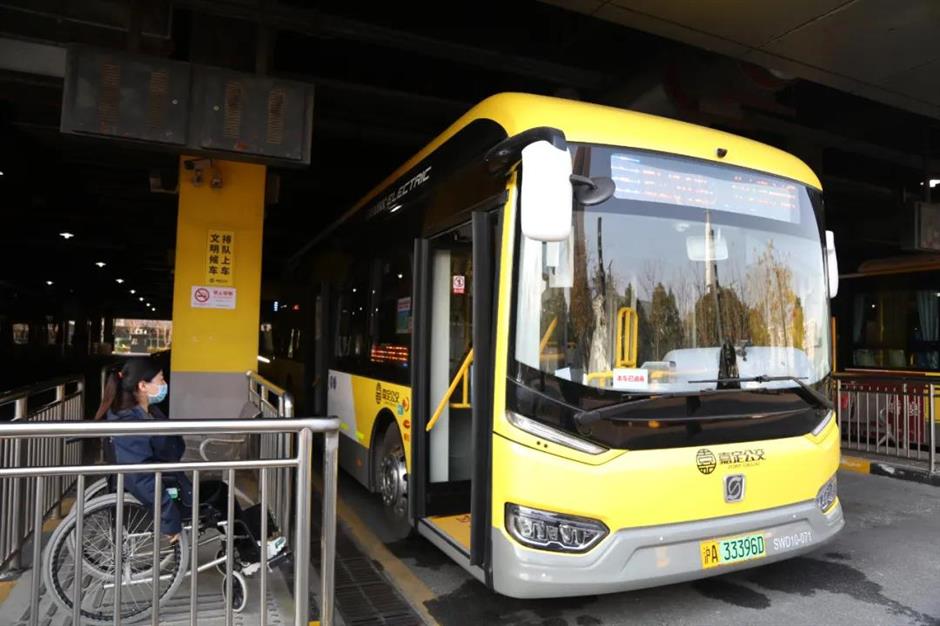 A passenger waits to get on the bus on Jiading No. 14 route. 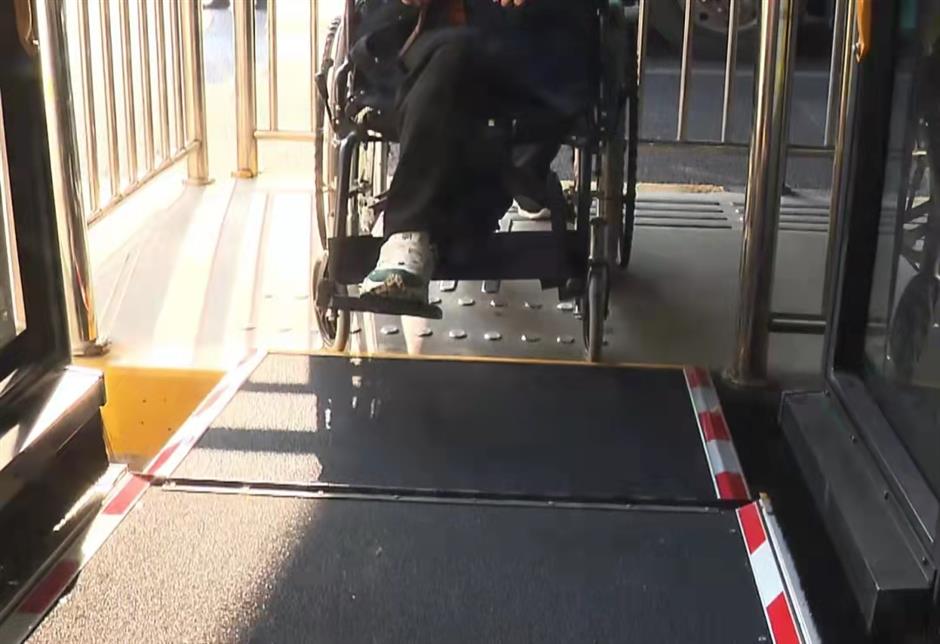 The general public is also becoming more aware of people with disabilities.

"Nya's lifetime," a vlogger with more than two million followers on Bilibili, uploaded a video of her experience going out with Zhao in a wheelchair for two days. It was viewed more than 2.4 million times and had over 5,000 comments.

Liu Mengna, another vlogger with over 500,000 followers on Bilibili, also shared her experience with Zhao.

It led to what came to be known as the "Wheelchair Challenge," similar to the "ALS Ice Bucket Challenge." It brought to light several inconveniences faced by disabled people every day. With online celebrities joining in, awareness among the people is steadily growing.

In two years, Zhao has heard many stories from her followers. She recounted how a girl's family bought a wheelchair for her brother after watching Zhao's video and later traveled to Shenzhen. It was the first time her brother had undertaken a long journey.

A netizen on Nya's video said his father was in tears after being allowed into a tourist boat on West Lake in Hangzhou.

"I was really touched, it never occurred to me that I could influence other people," Zhao said.

Zhao's parents are high school teachers and she did her early schooling at home. She started going to school at the late age of seven but her best memories are from her primary school.

"I guess that is the reason for my confidence and happiness," she said.

Zhao resigned from her job in March last year to produce more videos.

"I always feel that people have values and missions in their lives," she said. "One of my missions is to share my life as an independent person so that more people with disabilities will be seen."

She has two goals: one is to see barrier-free facilities everywhere, and the other is to live independently without anyone's help.

"It's hard to change the society," she said. "I don't want to be aggressive and argue with others. All I want is to be treated equally. We are ordinary who just happen to live another lifestyle."