Savoring the pleasure of offline shopping

When a customer left the Muji outlet at Global Harbor with two large bags of items costing nearly 1,000 yuan (US$150), the store's salesperson couldn't help but laugh.

"Even though not all of our merchandise has arrived yet, customers' desire for shopping hasn't changed," the man, surnamed Li, told Shanghai Daily. "In fact, it's even stronger."

After nearly two months, Li has finally returned to his post. Although working under closed-loop management amid the COVID-19 pandemic, which is easing, he is pleased to see his workplace gradually regain its former lively atmosphere.

The Global Harbor shopping mall in Shanghai's downtown Putuo District reopened on May 26, indicating that the megacity had entered the final stretch after a COVID-19 resurgence brought the normally bustling metropolis to a standstill. 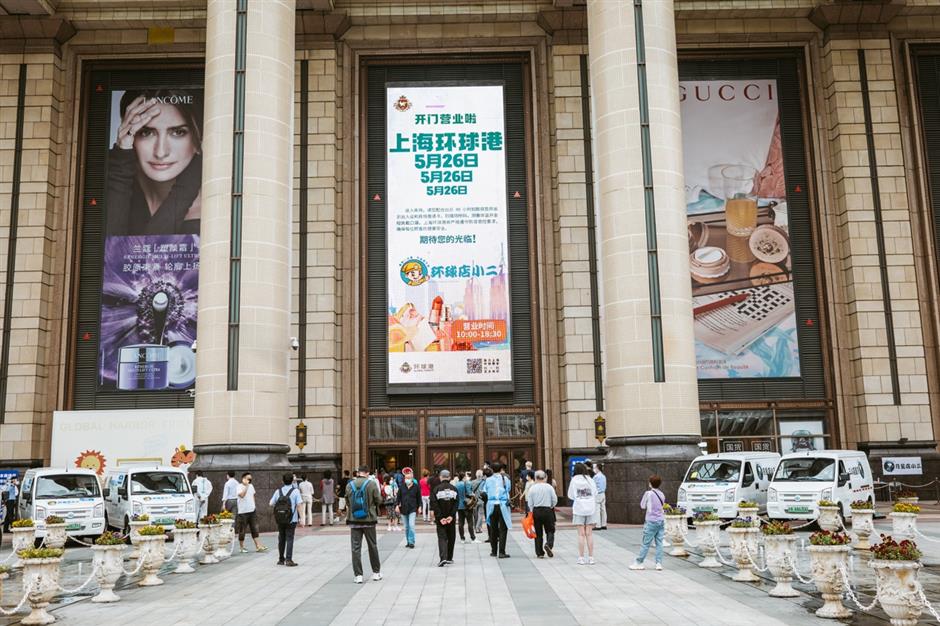 The Global Harbour shopping mall in Putuo District reopens, attracting many nearby residents.

Muji, one of the first stores to reopen in the mall, has become one of the most popular stores among customers due to its diverse product offerings.

Tomo, a Japanese man, and his friend went straight to the mall's snack section. Each of them had a cheesecake in their hands that they had purchased from another store at the mall. In less than five minutes, their shopping basket was already filled with instant noodles and various snacks.

The excitement of his first offline shopping since the lockdown overshadowed his disappointment at discovering that his favorite supermarket was still closed. "I wanted to buy more sweet snacks. They can make me happy," Tomo added. 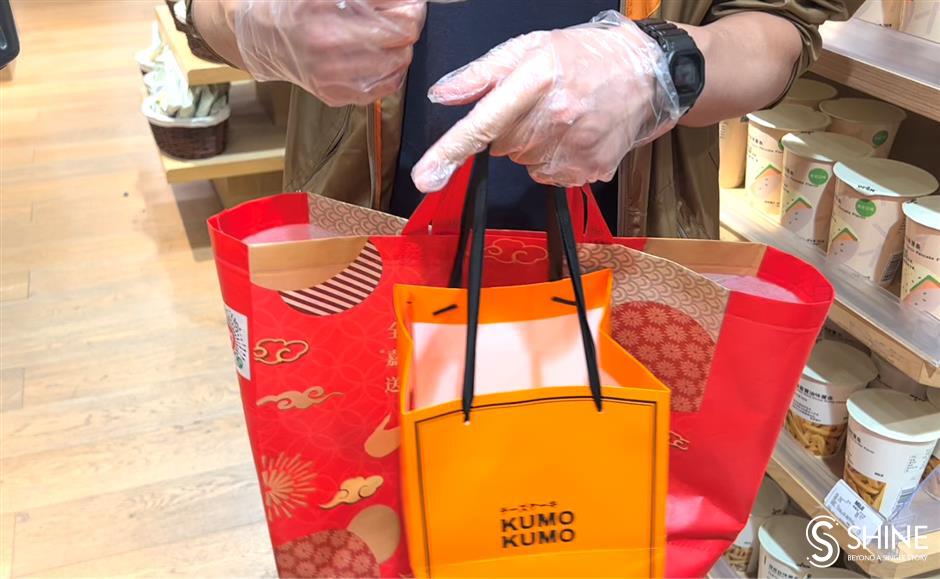 Tomo had already bought a KUMO cheesecake before shopping at Muji. 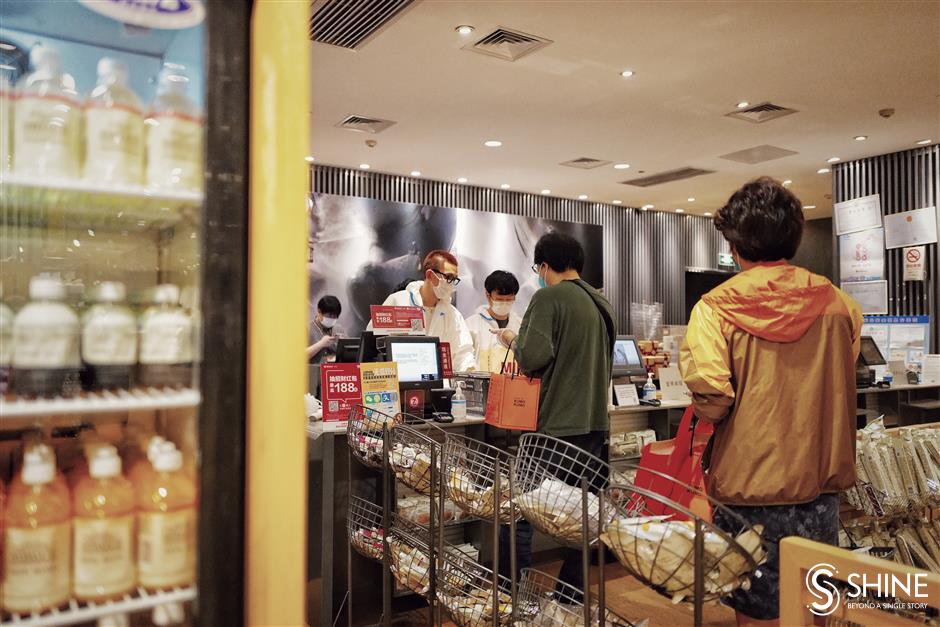 Tomo (in the orange coat) and his friend (in the green coat) stand in line to check out at the store.

In addition to food, Li said that T-shirts and shorts were the day's most popular items. "Customers view our store as an alternative to traditional supermarkets," he pointed out.

Another customer who finds happiness in sweet food is Zhang Xiao, a young woman in her 20s. Near the end of the mall's business hours, she bought five cups of mango pomelo sago from chain milk tea brand Sweet7 on the B1 floor.

Zhang said that she would share them with her roommates because they had almost forgotten the taste of their favorite drink.

Mango pomelo sago is Sweet7's signature drink. A staffer surnamed Wu revealed that most customers who came to the shop bought the drink. As of 6pm that day, the store's total turnover for the day was about 6,000 yuan (US$895). Compared with the approximately 10,000 yuan under normal circumstances, there was no significant difference.

"Many customers come here to buy some drinks after shopping before going home," Wu noted. "Few would miss this opportunity to buy a drink offline." 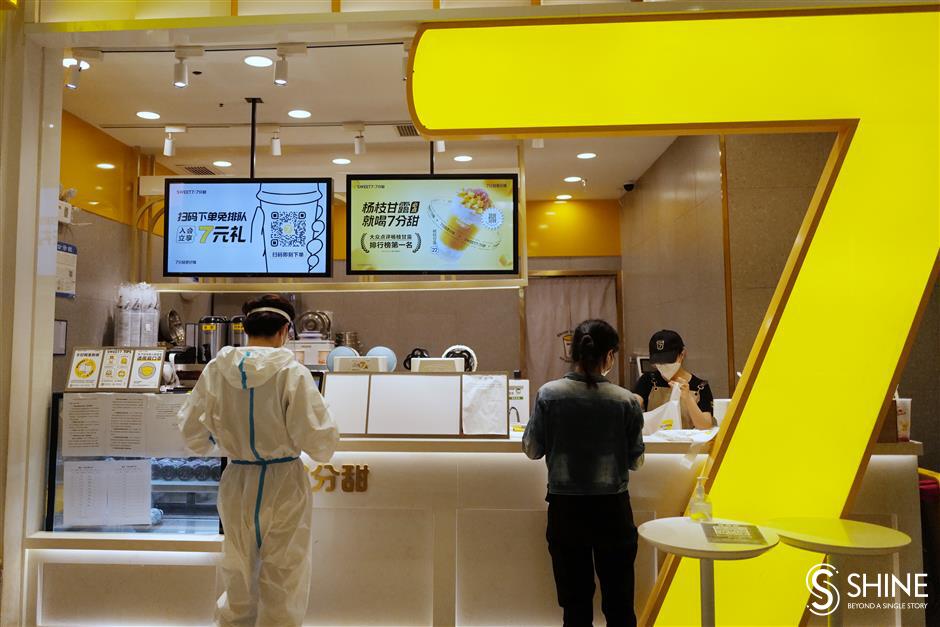 The mall is currently open from 10am to 6:30pm to comply with the city's pandemic control requirements. Customers are required to show their special passes, "invitation cards" from the store, and a green health code to enter the store.

However, not everyone who owns a pass had a successful shopping experience.

A 50-year-old man Shi Yi sat on a bench on Nanjing Road, opposite Shanghai First Foodhall. He rode over in the afternoon after learning of the store's reopening on Douyin on the morning of May 25. It took him about half an hour to get there from his home in Changning District. However, when he arrived, the store's doors were already shut.

According to the official WeChat account "Shanghai Huangpu," the store was only open from 10am to noon that day because it was its first day back in business. 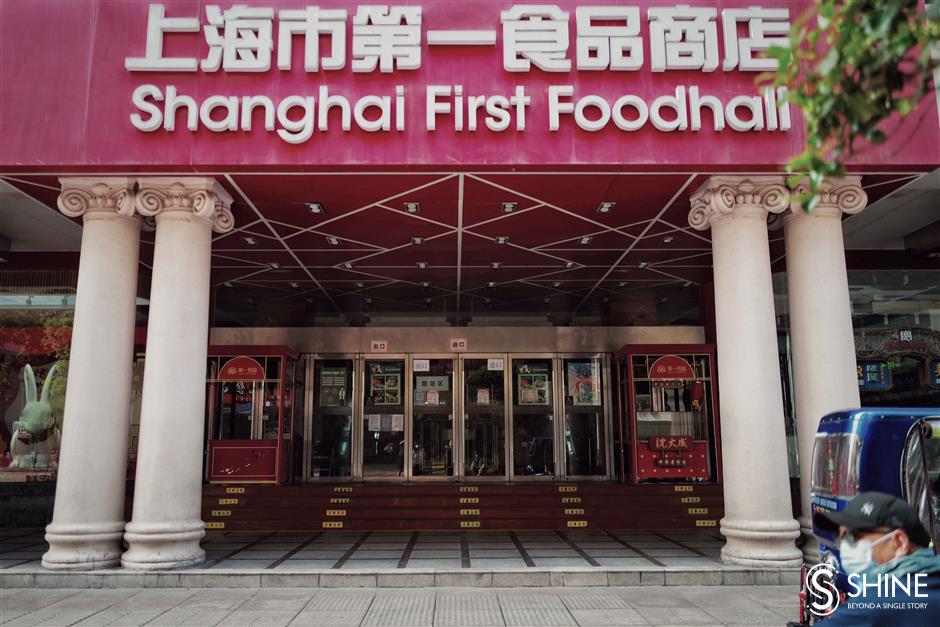 When Shi Yi (at the right corner) arrived in the afternoon of May 25, the door of Shanghai First Foodhall was closed.

"It didn't say in the short video that there was a business-hour limit," Shi said. "I didn't want to buy food. All I wanted was some cigarettes."

For nearly two months, this heavy- smoking veteran had been tortured by the fact that he had to finish each cigarette in two or three sittings because he had no more "stock."

Even if Shi had not missed the opening hours, he would have been unable to purchase cigarettes. The store's current offerings consist of food items only.

However, if he had gone to the area three days later, he would have discovered that a store where he could buy cigarettes had resumed operations on the road.

Near Shanghai First Foodhall, Shanghai No. 1 Department Store reopened on May 28. Aside from some restaurants, cosmetics brands such as La Mer and Estee Lauder in Hall A, the tobacco counter in Hall B, and the adidas flagship store in Hall C have all returned to business. 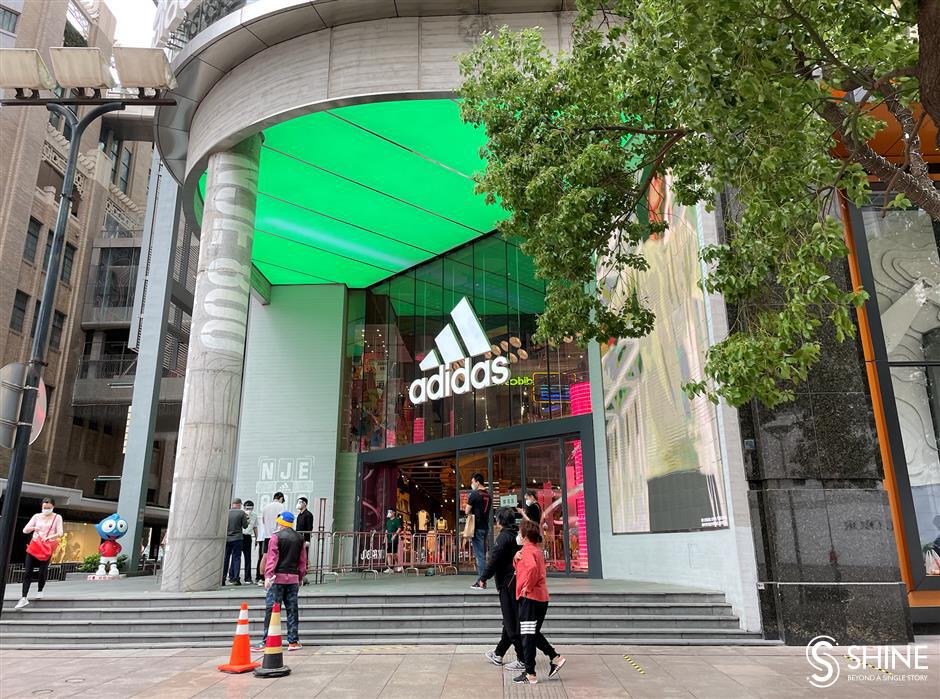 The flagship store of Adidas on Nanjing East Road reopens on May 28.

To enter the store, customers need to make a reservation and show their green health code. Only 50 people are admitted per hour. The store's business hours are from 10am to 6pm from May 28 to June 2.

At the adidas flagship store, customer Hua's oversized shopping bag was already stuffed with three sportswear pieces. She lives in Huangpu District's Nanjing Road E. Subdistrict and had gone shopping at least three times since May 25.

Buying food offline was nothing new to her, but buying clothes certainly was.

"Sportswear is more comfortable for me when I'm at home," she stated, showing off her long-awaited, newly acquired "trophies." "I got these at 20 percent discount, so they're not too expensive."

Currently, the malls are open from 9am to 5pm. Time-honored brands such as Ningbo Soup Dumpling Shop and Nanxiang Steamed Bun Shop are among the first to resume operations.

Customers can order online and then pick up the goods directly offline, with a waiting time of about 15 minutes. 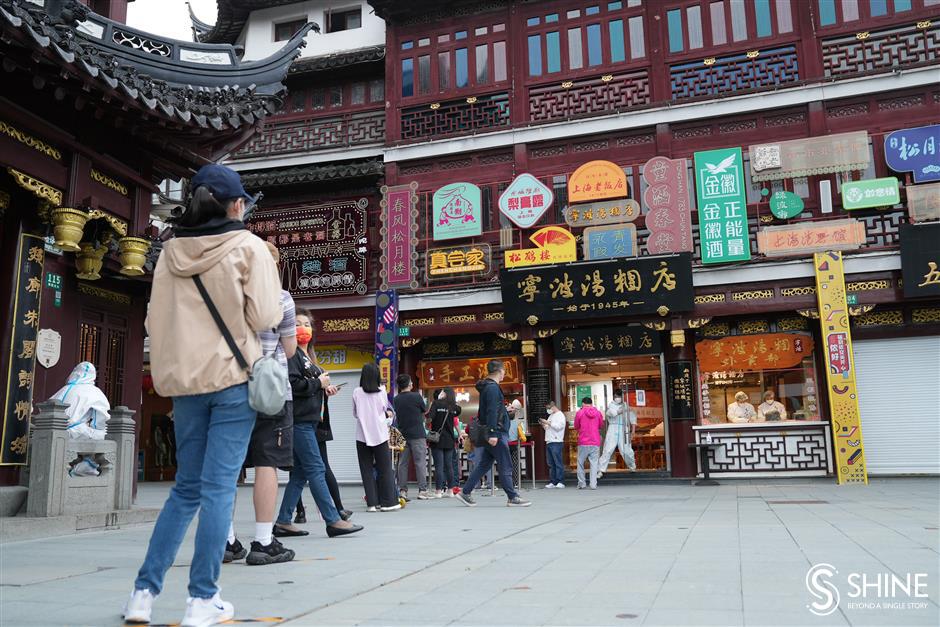 Customers wait in line in front of the Ningbo Dumpling Shop.