COVID-19 one of this year's top concerns 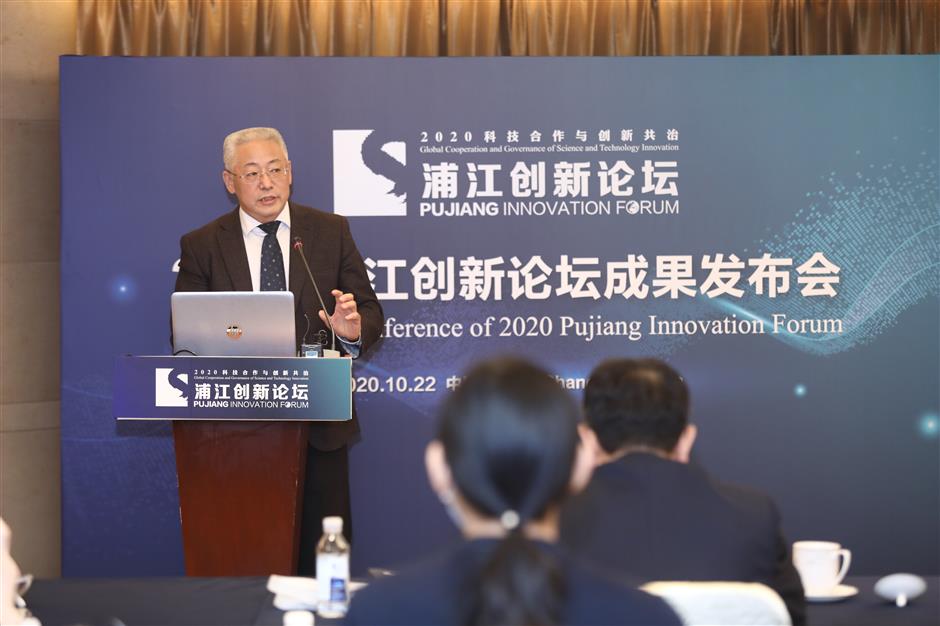 Liu Qiyan, deputy director of the Institute of Scientific and Technical Information of China, introduces the report.

COVID-19 and Shanghai’s three core industries — integrated circuits, biological medicine and artificial intelligence — were the topics of most concern this year so far, according to a report released at the Pujiang Innovation Forum on Thursday.

The report on the global trends in cutting-edge technology was released by the Institute of Scientific and Technical Information of China and the Shanghai Institute for Science of Science.

The report found COVID-19 was second only to biological medicine as a major concern with people paying more attention to devices and treatments to combat the virus.

In biological medicine, tumors were the main concern with various cancers much more worrisome than other diseases.

Mental illnesses, especially depression, Alzheimer's and Parkinson’s, were also worrying people. Their impact was no less than that of physical diseases, the report said.

The report also showed that artificial intelligence was not only powering everyday life but also revolutionizing the military field represented by the emergence of mosaic warfare. From design to manufacturing, major techniques and processes in the integrated circuit business also received much attention.

An interesting and inspiring fact is that brain-computer interface started from science fiction, said Liu Qiyan, deputy director of the Institute of Scientific and Technical Information of China.

Starting in the US in the 1970s, brain-computer interface has quickly entered the stage of a technology boom.

In recent years, many countries, including China, the US, Japan, South Korea and Australia, had drawn up plans to develop brain and brain-like science. Across the world, tens of billions of US dollars have been poured into brain-computer interface research.

In China, Chengdu has formed a cooperation with Cuba and Canada to research the subject. Shanghai is also a major research place of world renown.

Hefty investments have paid off and the topic is developing well by combining with artificial intelligence, according to the report.

Future development mainly relies on the improvement of materials and signal processing algorithm. Also, there are ethical issues to be discussed and solved, the report showed.

Genetic editing is also facing the ethical issues, which needs experts and authorities to work to improve censor, policy and administration.

The World Health Organization has suggested strengthening global governance on genetic editing. The Worldwide Threat Assessment of the US Intelligence Community has listed genetic editing a weapon of mass destruction.

Another problem is how to decrease the off-target effects, according to the report.

Soft robotics is a made of soft materials such as elastomeric and silica gel and embedded with advancing technologies such as 3D printing and automation intelligence. Today’s research focuses more on the development of biomimetic technology, the report showed.