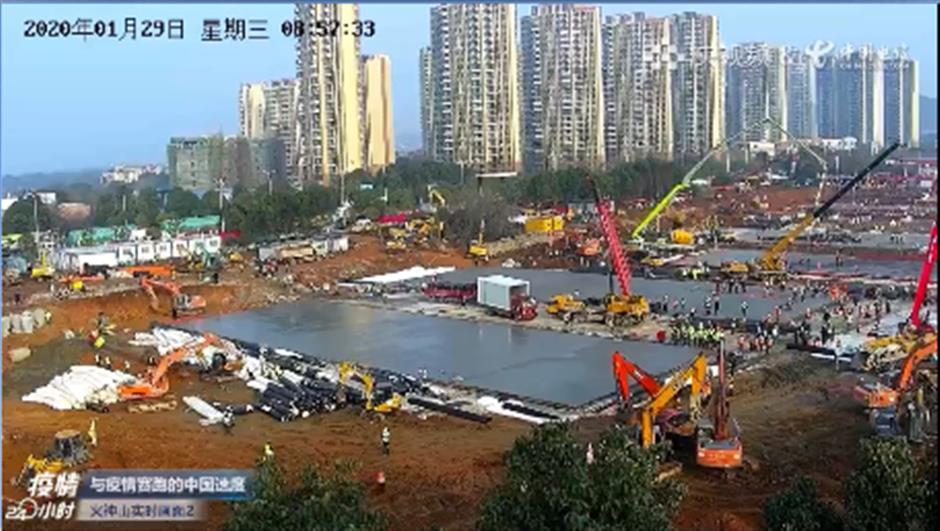 Huoshenshan hospital is under construction in Wuhan, Hubei Province, on January 29.

Millions of netizens have been watching the live streaming of the construction of two temporary field hospitals in Wuhan to treat patients infected with the novel coronavrius.

Dubbing themselves "construction site supervisors," as many as 25 million Chinese netizens at a time have been closely monitoring the building of the hospitals, known as Leishenshan and Huoshenshan, on an around-the-clock, live broadcast by China Central Television.

Together, the hospitals will have between 2,000 and 2,500 beds to treat pneumonia patients infected with the novel coronavirus. The two facilities are expected to be put into use on February 3 and February 5, respectively.

Partially to relieve boredom as people are advised not to go outside or gather in groups to minimize the chances of contagion, netizens have been carefully scrutinizing the construction, and have even given nicknames to certain engineering machinery.

Three of the most popular machines currently are a forklift, shovel loader and excavator, each having their own nicknames based on their color.

The conversation among viewers often centers on what workers and equipment are doing, while those with construction experience offer commentary and explanation.

Chinese health authorities announced on Wednesday that 5,974 confirmed cases of pneumonia caused by the novel coronavirus had been reported in 31 provincial-level regions by the end of Tuesday with Wuhan at the center of the epidemic. A total of 132 people have died from the virus.