Heated competition for Spring Festival visitors has resumed at Chinese scenic spots, shopping malls, and cinemas, following the end of a three-year lull caused by the COVID-19 pandemic.

With China recently downgrading its management of COVID-19, unleashing pent-up travel demand, legions of tourists have again been spotted across China during the week-long Spring Festival holiday that started on Saturday.

In response, local governments and industries are rolling out festive activities, lively bazaars, and shopping coupons in all-out efforts to buoy the long-awaited recovery from the COVID-19 doldrums.

This year's Spring Festival is the first in three years not to encourage Chinese people to stay put during the festival to prevent large-scale outbreaks. The festival usually sees hundreds of millions of Chinese head to their hometowns to unite with families.

Passenger trips for this year's Spring Festival travel rush are expected to reach 2.1 billion, almost twice as much as last year or 70.3% of the 2019 reading, according to the Ministry of Transport.

The lifting of many COVID-19 restrictions, coupled with subsiding infections in many Chinese cities, has fanned the travel frenzy, which also features travelers returning home from overseas.

"We haven't returned to China for three years. We're so happy to be at home," said Wei Liyao as she and her son landed at an airport in Changsha, the capital of Hunan Province, after flying there from Malaysia.

"I'll bring my son to see his grandparents during the Spring Festival and then we plan to do some sightseeing," said Wei.

"This trip matters a lot to our family and so we don't cap the budget," Luo said.

Data from online travel agency Trip.com Group points to surging demand for Spring Festival travels and sightseeing. Reservations for domestic group tours during the holiday, for instance, registered a yearly increase of 354% as of January 15.

As of last Friday, the average price of a one-way domestic air ticket during the holiday stood at 988 yuan (US$146), up 25% year on year, according to the agency.

Chinese cities are welcoming the return of tourists with a variety of festive activities. Many celebrations that were curtailed amid virus curbs have also resumed. 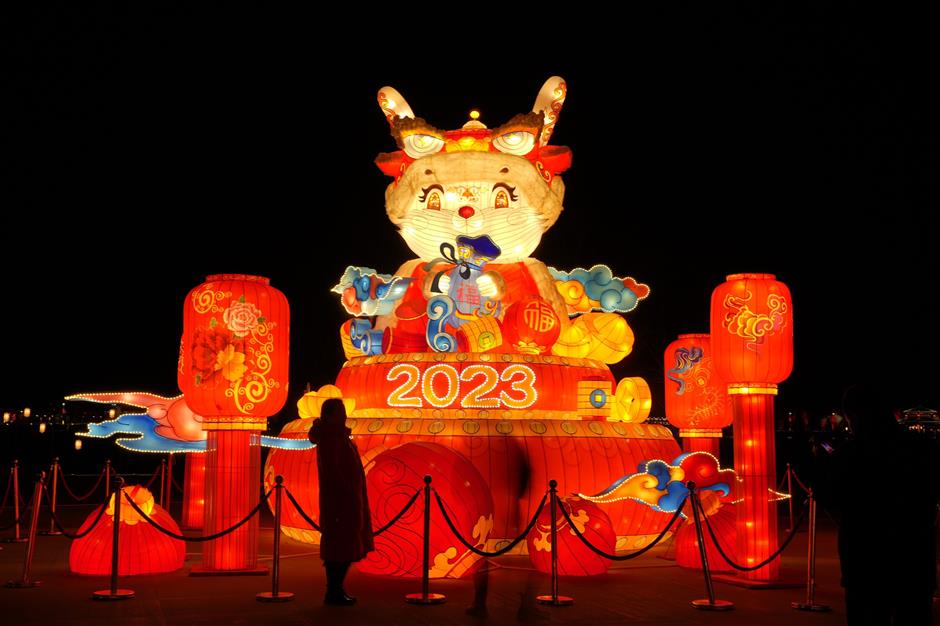 Xi'an is holding a series of tradition-themed activities, including a show of gigantic lanterns and live performances on its renowned ancient city wall. On Monday, the huge influx of tourists prompted the city wall management to limit tourist capacity and encourage off-peak travels.

In Changsha, the iconic theme park "Window of the World" has extended its opening time to allow night-time visitors until February 5. The city's Tianxin District, known for its energetic nightlife, is holding a shopping carnival and promoting it with coupons and sales.

Similar shopping festivals are being held in the municipalities of Shanghai and Chongqing, and the provinces of Fujian, Jiangxi, and Liaoning, among others.

The northeast provinces of Jilin and Heilongjiang have launched consumption voucher schemes to capitalize on the golden period of ice-and-snow travel. Vouchers with a total value of US$4.4 million have been issued in Jilin to attract visitors to ice-and-snow activities. 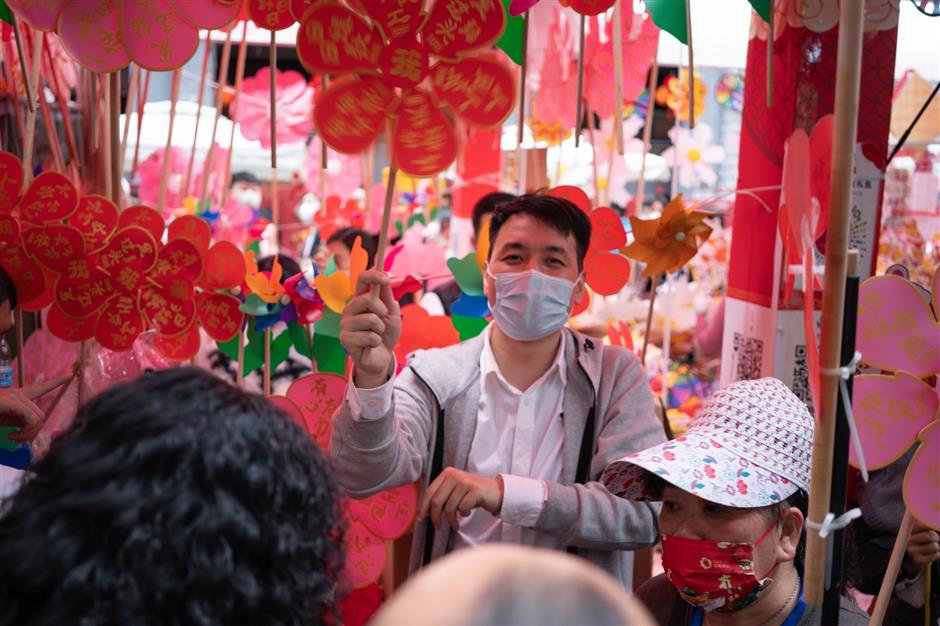 In the southern metropolis of Guangzhou, the traditional flower fairs ahead of the Chinese New Year were resumed, bringing back hundreds of stalls selling flowers, crafts, and snacks, while lively performances such as lion dances were also on offer.

"We can feel the Spring Festival vibe back in the air," said Zhang Qingyong, whose family of three bought a butterfly orchid, a potted orange tree, and Spring Festival couplets to decorate their house in Guangzhou.

As of their closing on January 21, the three-day flower fairs in the city had received more than 3.9 million visits, with the sales volume reaching US$21 million, up 19.3% from the figure in 2019 before the COVID-19 pandemic struck.

Many businesses said their footfalls and revenues have largely returned to pre-COVID-19 levels, while some hailed an all-time high.

"The number of our queueing customers has reached 3,000 every day, and our crayfish sales have far exceeded the pre-pandemic level," said Sun Ping, general manager of Changsha Wenheyou, a famous restaurant brand in Changsha. 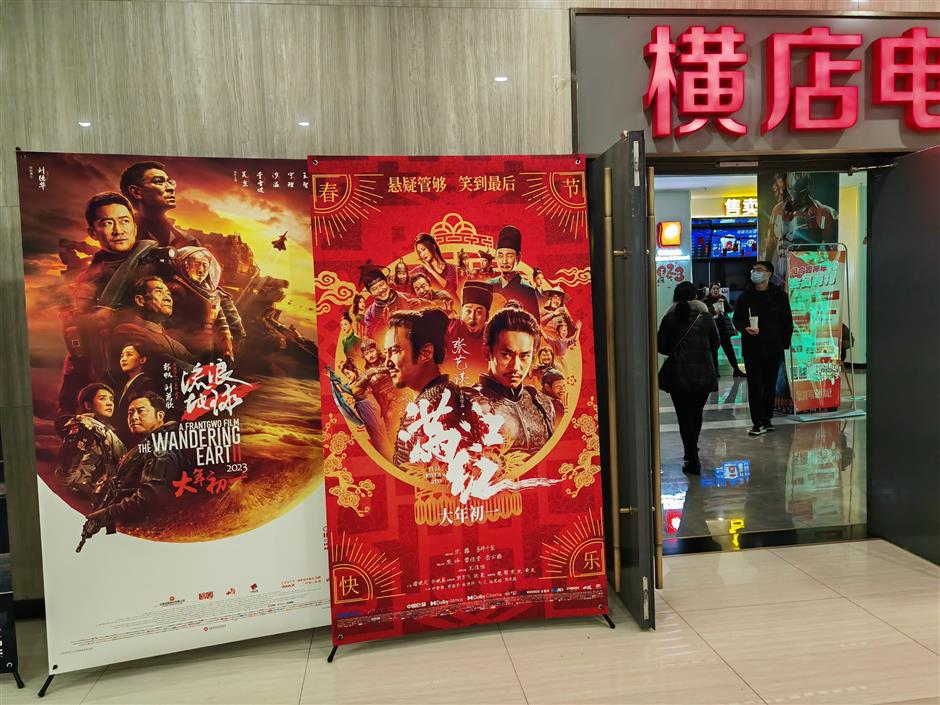 Many people went to see The Wandering Earth 2 and Full River Red at a cinema in Wuxi, Jiangsu province, on January 23.

Cinemas are also welcoming back movie-goers, with a cluster of highly anticipated blockbusters on offer during this year's Spring Festival, usually a peak movie-going period in China.

"The cinema was full while everyone wore a mask voluntarily," said Li Yingying, a resident of Guangzhou who watched the movie "Full River Red" with her parents on the first day of the Chinese New Year.

As of Tuesday morning, the total box office for new movies screened during the Spring Festival had surpassed US$0.44 billion, with sci-fi blockbuster "The Wandering Earth II" and Zhang Yimou's suspense comedy "Full River Red" taking the lead, according to box office tracker Maoyan.

"This year's Spring Festival films are well-made and relatively inexpensive, so I'm more tempted to go to the cinema," said Liu Xinyuan, who made a long list of films to watch during the festival.