Yellow vest protesters return to streets of France in force 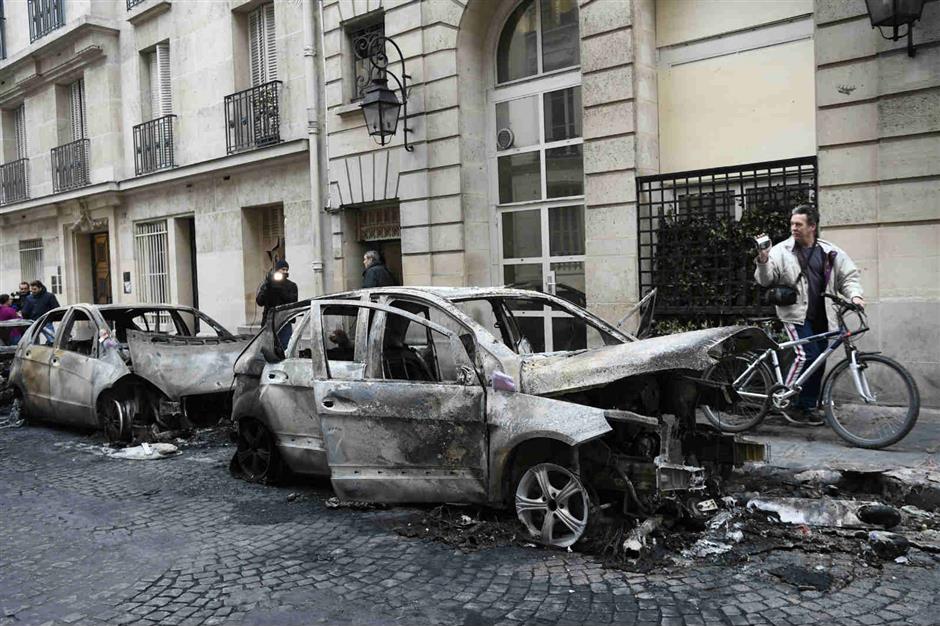 A cyclist videos a burnt-out vehicle in Paris after yellow vest demonstrators returned to the streets over the weekend. They set alight vehicles in the wealthy area around Boulevard St Germain and smashed their way into a government ministry building with the help of a forklift truck.

“Yellow vest” protesters were back on the streets of France over the weekend in larger numbers, clashing with police in several cities and smashing their way into a government ministry in Paris with the help of a forklift truck.

The interior ministry put the number of protesters who took to the streets on Saturday at 50,000, compared with 32,000 on December 29 when the movement appeared to be weakening after holding a series of weekly Saturday protests since mid-November.

Government spokesman Benjamin Griveaux, who was evacuated from his ministry in central Paris when a handful of protesters in high-visibility vests smashed down the large wooden door to the ministry compound, denounced the break-in as an “unacceptable attack on the Republic.”

“Some yellow vest protesters and other people dressed in black ... got hold of a construction vehicle which was in the street nearby and smashed open the entrance gate to the ministry,” he said.

They briefly entered the courtyard where they smashed up two cars, broke some windows then escaped, he added, saying police were trying to identify them from security footage.

French President Emmanuel Macron did not specifically refer to the incident, but tweeted his condemnation of the “extreme violence” against “the Republic, its guardians, its representatives and its symbols.”

Griveaux had earlier criticized the yellow vest movement, describing those still involved as “agitators” who were seeking “to overthrow the government.” Police said some 3,500 demonstrators turned up on the Champs-Elysees on Saturday morning.

Some then made their way south of the river to the wealthy area around Boulevard St Germain, where they set light to a car and several motorbikes and built burning barricades, prompting police to fire tear gas to try and disperse them.

Demonstrators took to the streets of several other cities across France, with up to 2,000 people in Rouen northwest of Paris, where some set up burning barricades. One protester was injured and at least two others were arrested, police said.

Some 4,600 protesters hit the streets of the southwestern city of Bordeaux, with some hurling stones at police who answered with tear gas and water cannon. Five police were hurt and 11 people arrested, local authorities said, adding that several cars were torched and shop windows broken.

Further south in Toulouse, 22 people were detained following clashes that erupted after 2,000 people turned out to demonstrate.

And in the central-eastern city of Lyon, several thousands took to the streets, blocking access to the A7 motorway and causing traffic jams for those returning from Christmas holidays in the mountains.

The yellow vest movement began in rural France over plans to increase fuel taxes. But it later ballooned into a wider revolt against Macron’s pro-market policies and governing style, with 282,000 people joining the first Saturday rally on November 17.

Macron initially refused to make any concessions, but in mid-December, after weeks of violence, he scrapped the planned fuel tax hike and promised extra cash for minimum wage earners as well as tax cuts for pensioners.

The protests have turned into the biggest political crisis of Macron’s 20-month presidency and brought his popularity ratings to an all-time low.

Although public anger appeared to abate following his concessions and over the holiday period, the brief arrest on Wednesday of Eric Drouet, one of the leaders of the movement, appeared to rekindle resentment among his supporters.

The latest opinion poll by Odoxa Dentsu, indicated 55 percent support the protests — a figure which, although lower than the 75 percent back in November, is still important enough to suggest the anti-austerity movement retains political clout.

“When I see the millions spent on incredibly trivial things, when I see politicians using private planes and chauffeur-driven cars to get around ... all this money spent is unacceptable,” she said.