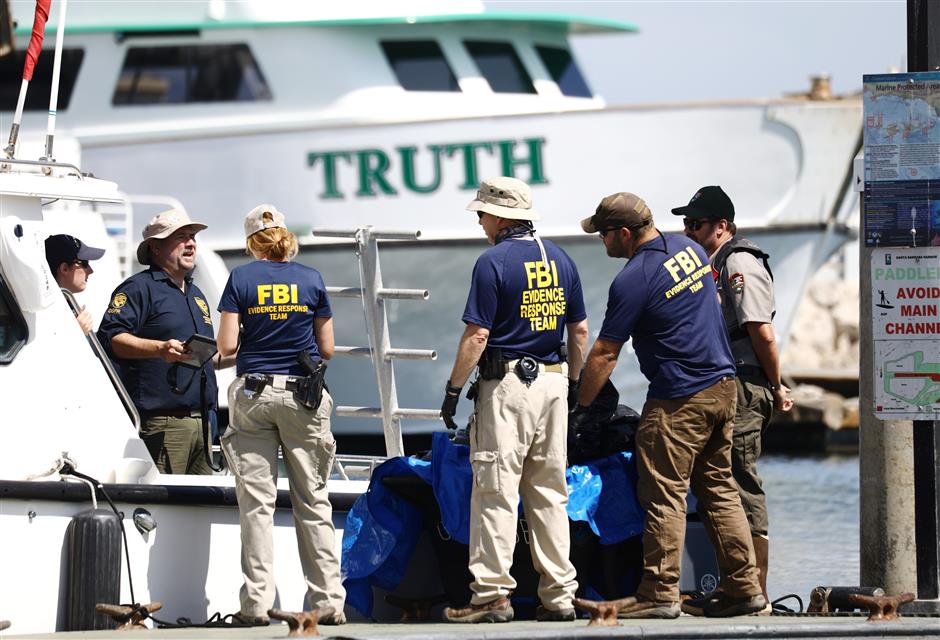 Members of the FBI Evidence Response Team and other officials work in front of the ship Truth, a sister ship of the diving ship Conception, on September 3, 2019, in Santa Barbara, California.

Search operations were suspended Tuesday for survivors of a scuba-diving boat disaster off the California coast after divers recovered 20 bodies and spotted another four to six trapped in underwater wreckage.

The remains of 11 women and nine men were transferred to coroner offices after the 75-foot (23-meter) Conception caught fire and sank Monday, trapping below-deck passengers beneath the roaring blaze.

"Today we will begin the process of mapping DNA profiles of the 20 victims that we have recovered so far, so that they can be compared with family samples," Santa Barbara County Sheriff Bill Brown told a news conference.

The boat had been on a diving excursion around Santa Cruz Island, just west of Santa Barbara in southern California, when disaster struck early Monday.

Five crew members were awake and jumped into the water when flames burst out around 3:15am. They were rescued by a nearby pleasure craft.

A total of 39 were on board, officials said, leaving 14 yet to be recovered and presumed dead.

Both a stairwell and an escape hatch leading down to the lower deck where passengers were sleeping appeared to have been blocked by the inferno, Brown said.

On Tuesday, emergency officials began attempts to stabilize the boat so that divers can safely enter it and retrieve remaining victims.

Mourners gathering at the Santa Barbara docks set up a makeshift memorial, attaching large, colorful bouquets of flowers and messages of condolences to a fence along the waterfront.

One photo of a young woman, surrounded by candles, contained the note "I Love you Allie," while another card simply said: "Wishing you peace."

'Find out the cause'

"It is never an easy decision to suspend search efforts," she said. "We know this is a very difficult time for family and friends of the victims."

The operation will now enter a recovery and investigation phase "to try and determine why this incident occurred," she added.

Authorities were "expending all necessary means to find out the cause and origin of the fire," added Mark Hartwig, county fire chief.

US Senator Dianne Feinstein called late Monday for an "immediate and robust" investigation, saying it was "inconceivable" that a fire could lead to such heavy loss of life given existing safety regulations.

Bob Hansen, a sailor on board the nearby pleasure boat that rescued the crew members, told the Los Angeles Times he heard "explosions going off every couple of minutes," which may have been caused by dive tanks exploding.

"It made me feel so helpless," he said.

But Brown, the sheriff, said some of the audio calls published by media may have originated from nearby vessels rather than the Conception.

The explosions were heard well after the fire began and there was no evidence they had triggered the inferno, he added.

The Truth Aquatics website said the Conception, listed as having bunks for up to 46 people, had been scheduled to return Monday from a three-day trip after visiting several diving spots around Santa Cruz Island.