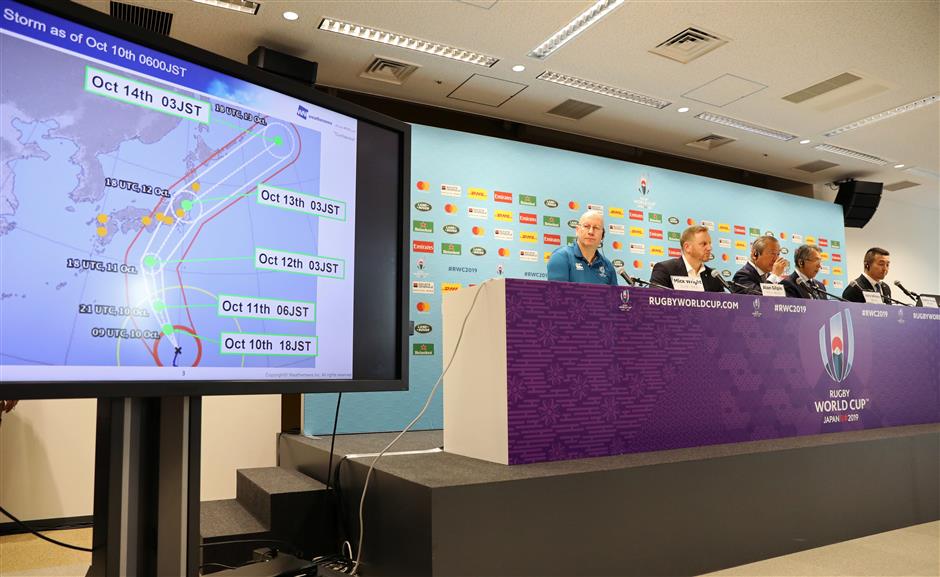 World Rugby give update on preparations for Typhoon Hagibis on Thursday with an image showing the path of the storm.

A super typhoon bore down on Japan Thursday, forcing the cancellation of two rugby World Cup matches and some transport, and threatening to disrupt Japan’s Formula One Grand Prix race this weekend.

Parts of Japan are still recovering from a devastating typhoon that struck a month ago, as the new storm, Typhoon Hagibis, headed north over the Pacific toward Japan’s main island. It could make landfall tomorrow, the Japan Meteorological Agency said.

“Regardless of whether this typhoon makes landfall or not, it will have a grave impact,” an agency official said.

Rugby World Cup organizers have canceled tomorrow’s game between England and France as well as New Zealand’s match against Italy due to the risk from the typhoon, while a Sunday game between hosts Japan and Scotland is in doubt.

Japanese airline ANA will cancel all domestic flights to and from Tokyo’s Haneda airport and Narita airport in Chiba prefecture, east of Tokyo, tomorrow.

Japan Airlines has also canceled more than 90 percent of domestic flights to and from those airports tomorrow, public broadcaster NHK reported.

East Japan Railway Co, which serves eastern Japan including Tokyo, said it might have to suspend operations on conventional lines as well as the Shinkansen bullet train service over the weekend.

Operations of the Shinkansen linking Tokyo and the western city of Osaka could also be canceled over the weekend, Central Japan Railway Co said.

Organizers of the Formula One Grand Prix said they were keeping a close eye on the typhoon and were working to minimize any disruption to this weekend’s schedule.