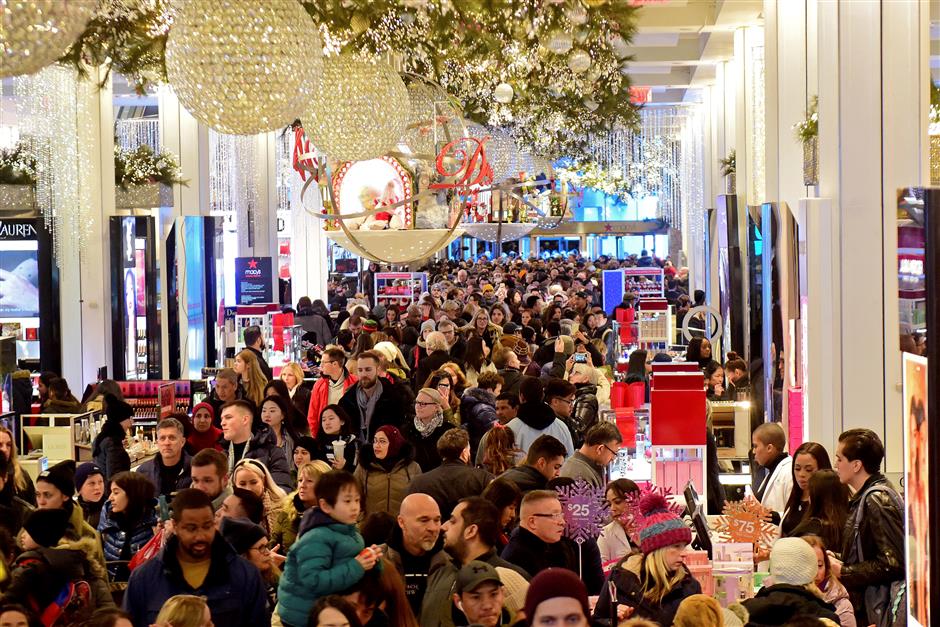 Macy's Herald Square opens its doors at 5pm on Thanksgiving Day for thousands of Black Friday shoppers in search of amazing sales and doorbuster deals on November 28, 2019, in New York.

US online shoppers spent US$4.2 billion on Thanksgiving, up by 14.5 percent from last year and reaching a record high, according to the web analytics tool Adobe Analytics.

Adobe Analytics tracks 80 percent of online transactions at 100 of the largest retailers in the United States.

From November 1 to Thanksgiving, online sales totalled US$57.1 billion. Smartphones made up 34.5 percent of all e-commerce sales, while some 60 percent of the revenue came from desktop computers, and 5 percent from tablets.

It is predicted that online sales for Black Friday, the day after Thanksgiving, will hit US$7.5 billion. As of 10am EST (3pm GMT), online sales already reached US$767 million, up by 19.2 percent from last year.

Cyber Monday, which falls on the first Monday after Thanksgiving Day and Black Friday, is considered the biggest online shopping day of the year.

This year, Adobe Analytics expects online sales on Cyber Monday to reach US$9.4 billion, up by 18.9 percent from 2018.

Holiday season shopping started early this year, as retailers began offering discounts earlier than usual, in the hope of making up for a shorter holiday season which is six days less between Thanksgiving and Christmas than last year.

Some 56 percent of consumers interviewed during the first week of November had already begun their holiday shopping, according to an annual survey released last week by the National Retail Federation and the Prosper Insights & Analytics.

"Consumers don't wait for Thanksgiving or Black Friday anymore and neither do retailers," said Phil Rist, Prosper's executive vice president of strategy. "Retailers responded this year by offering promotions earlier than ever, with some rolling out holiday deals even before Halloween."

Sales for the full holiday season will total between US$727.9 billion and US$730.7 billion, according to NRF forecasts. Consumers are expected to spend an average US$1,047.83, an increase of 4 percent over last year, according to NRF's annual survey released last month.