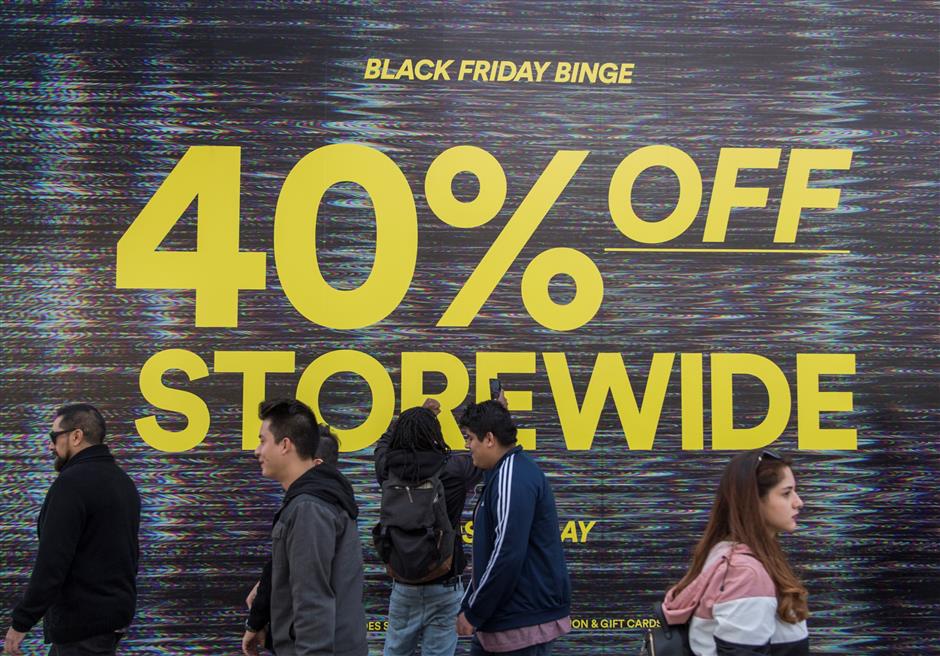 Shoppers walk past a store promotion during the Black Friday sales in Los Angeles, California on November 29, 2019.

US online shoppers spent US$7.4 billion on Black Friday, up by 19.6 percent from last year, according to the web analytics tool Adobe Analytics.

US online shoppers spent US$4.2 billion on Thanksgiving, up by 14.5 percent from last year and reaching a record high, according to earlier data from Adobe Analytics, which tracks 80 percent of online transactions at 100 of the largest retailers in the United States.

Salesforce, a cloud-based software company, meanwhile, said Thanksgiving digital sales in the United States grew 17 percent to US$4.1 billion. In a blog post, Salesforce said that Thanksgiving Day purchases were primarily through mobile devices, noting that 60 percent of all digital orders came through a mobile phone, beating prior estimates.

"Digital traffic also topped over 70 percent, giving early indications that shoppers are ready to transition toward a mobile-only reality," the blog wrote. "Mobile is on its way to becoming a beacon of light as the driver for multichannel and multi-touchpoint engagements," it said.

According to data from Adobe Analytics, smartphones made up 34.5 percent of all e-commerce sales from November 1 to Black Friday, while some 60 percent of the revenue came from desktop computers, and 5 percent from tablets. During the period, online sales totaled US$64.5 billion.

Cyber Monday, which falls on the first Monday after Thanksgiving Day and Black Friday, is considered the biggest online shopping day of the year. This year, Adobe Analytics expects online sales on Cyber Monday to reach US$9.4 billion, up by 18.9 percent from 2018.

A recent report from market research firm eMarketer predicted that overall US holiday e-commerce spending would climb to US$135.35 billion, which accounts for 13.4 percent of the estimated 1.008 trillion retail sales for this holiday shopping season.