Trump says no US troops hurt in Iran strikes, Tehran "standing down" 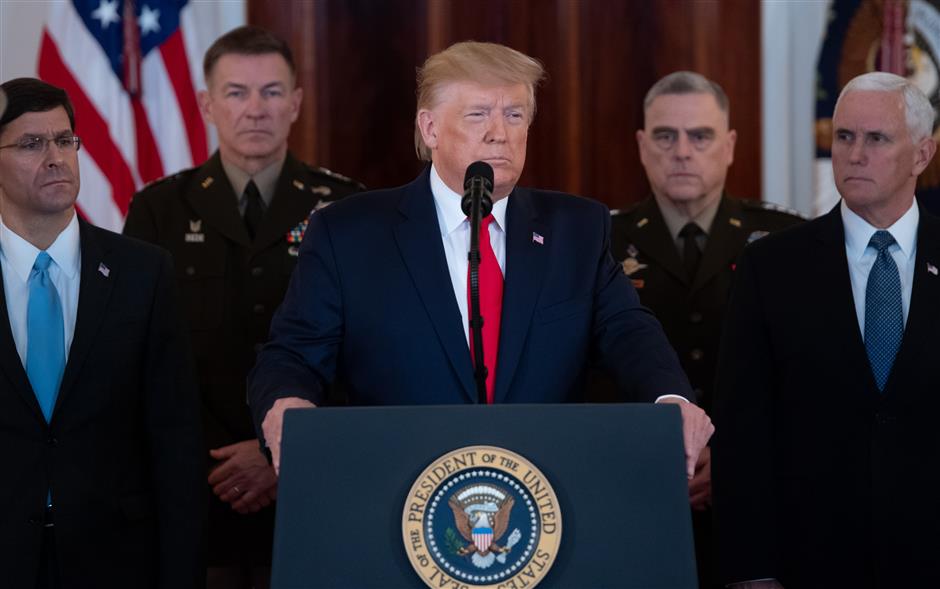 US President Donald Trump speaks about the situation with Iran in the Grand Foyer of the White House in Washington, DC, January 8, 2020.

US President Donald Trump said on Wednesday Iranian missile strikes on bases in Iraq had not harmed any U.S. troops stationed there and damage was minimal, an outcome he said showed Tehran wanted to de-escalate a standoff.

Iranian forces fired missiles at military bases housing U.S. troops in Iraq early on Wednesday, saying it was in retaliation for the killing in a US drone strike of powerful Iranian commander Qassem Soleimani on Jan. 3.

"No Americans were harmed in last night's attack by the Iranian regime. We suffered no casualties. All of our soldiers are safe and only minimal damage was sustained at our military bases," Trump said in an address to the nation.

"Our great American forces are prepared for anything. Iran appears to be standing down, which is a good thing for all parties concerned and a very good thing for the world."

As he spoke, the US president was flanked by Vice President Mike Pence, Defense Secretary Mark Esper and Secretary of State Mike Pompeo and military officers.

Iran's Supreme Leader Ayatollah Ali Khamenei, who earlier on Wednesday addressed a gathering of Iranians chanting "Death to America", said Iran's attacks were a "slap on the face" of the United States and said U.S. troops should leave the region.

Tehran's foreign minister said Iran took "proportionate measures" in self-defence and did not seek an escalation.

Trump's reaction in the immediate aftermath of the attacks had been to say on Twitter that "All is well!" and that Washington was assessing damage.

Trump's early tweet and the comment by Iran's foreign minister had acted to soothe some initial concerns about a wider war and calmed jittery financial markets.

U.S. and European government sources said they believed Iran had deliberately sought to avoid U.S. military casualties in its missile strikes to prevent an escalation.

Earlier on Wednesday, an Iranian army spokesman had denied "foreign media reports" suggesting there had been some kind of coordination between Iran and the United States before the attack to allow bases to be evacuated, Fars news agency said.

The U.S. president, who was impeached last month and faces an election this year, had at the weekend threatened to target 52 Iranian sites if Iran retaliated for Soleimani's killing.

Iranian state television said Iran had fired 15 ballistic missiles from its territory at U.S. targets in its neighbour Iraq early on Wednesday. The Pentagon said al-Asad air base and another facility in Erbil were struck.

Iranian state television had said 80 "American terrorists" had been killed and U.S. helicopters and military equipment had been damaged. But it did not say how it obtained that information.

Germany, Denmark, Norway and Poland said none of their troops in Iraq were hurt. Britain, which also has personnel in Iraq, condemned the Iranian action and said Tehran "should not repeat these reckless and dangerous attacks".

Iraq said its forces did not suffer casualties.

More than 5,000 US troops remain in Iraq along with the other foreign forces in a coalition that has trained and backed Iraqis against the threat of Islamic State militants.