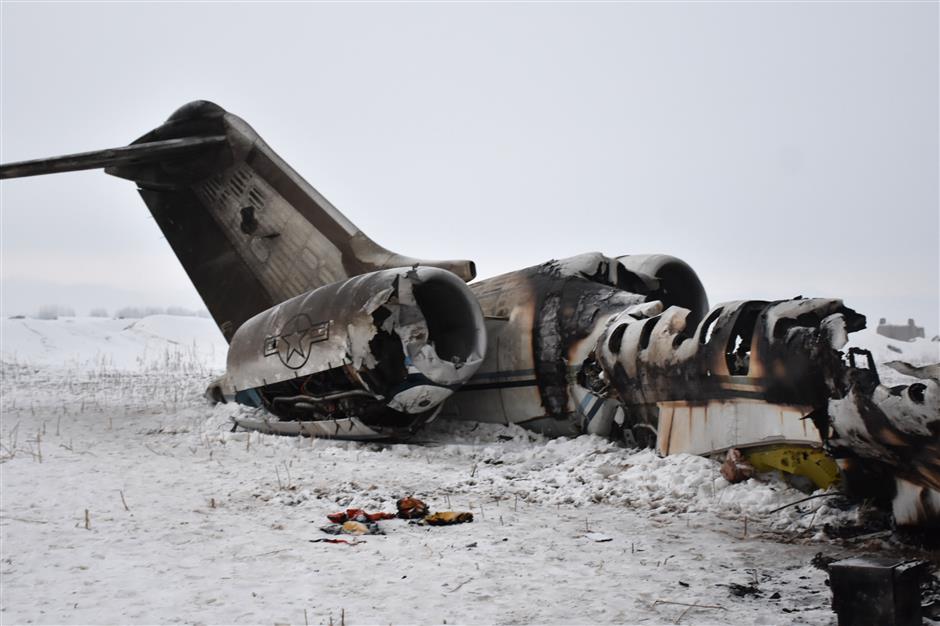 In this photograph taken on January 27, 2020, the wreckage of a US Bombardier E-11A jet is seen after it crashed in mountainous territory of Deh Yak district in Ghazni Province.

The US forces in Afghanistan on Tuesday recovered the remains of two personnel from the site in eastern Ghazni province, where a US aircraft crashed on Monday, US forces confirmed on Wednesday.

"On January 28, US Forces recovered the remains of two personnel from the site where a US Bombardier E-11A aircraft crashed in Ghazni Province, Afghanistan on January 27," the US Forces-Afghanistan, which is part of NATO-led Resolute Support, said in a statement.

The remains were found near the crash site, treated with dignity and respect by the local Afghan community, in accordance with their culture, the statement added.

"The forces also recovered what is assessed to be the aircraft flight data recorder. The cause of the crash remains under investigation, however there are no indications the crash was caused by enemy fire," the statement noted.

The US forces destroyed the remnants of the aircraft, according to the statement.

The statement did not provide details about the identity of the victims, only saying "pending positive identification and in accordance with US Department of Defense policy, the names of the service members are being withheld until 24 hours after notification of next of kin is complete."

Taliban militants fighting coalition forces and government security forces have claimed that the insurgents shot down the aircraft in the province, with Ghazni city as its capital, 125 km south of Kabul.

Since the beginning of this month, four Afghan army helicopters, including a contracted chopper, have gone down across Afghanistan, killing two Afghan army pilots and injuring 14 people.

In the latest incident, four Afghan army personnel were wounded on Saturday after the contracted helicopter was shot down by Taliban in Kajaki district of southern Helmand province.