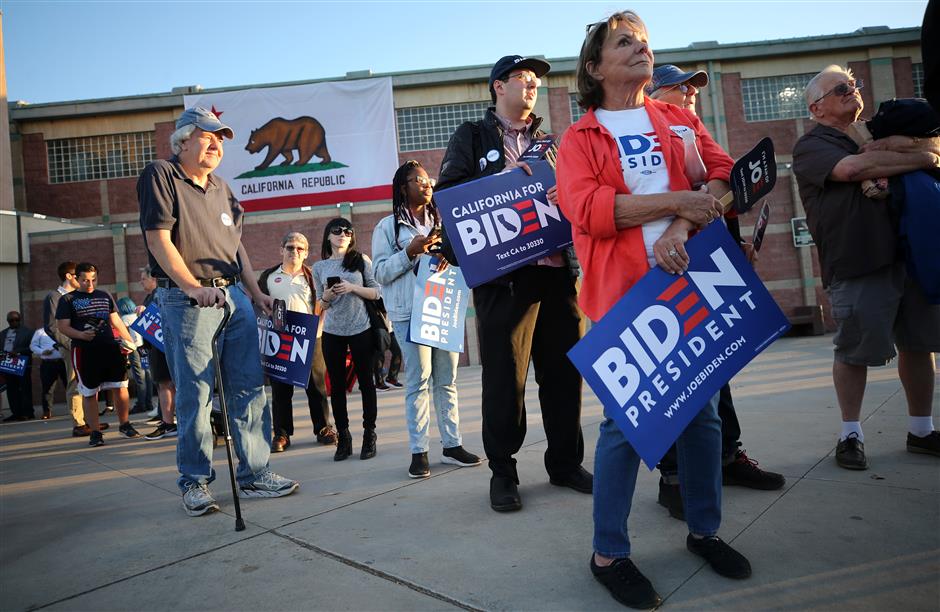 Joe Biden took an early lead over leftist rival Bernie Sanders in the Super Tuesday contests to pick a Democratic challenger to President Donald Trump, with a trio of projected wins in Virginia, North Carolina and Alabama.

As the first wave of results in the 14 states voting came in, it appeared that the centrist former vice president's remarkable rebound from a failing campaign was gathering pace.

Sanders, a self-described democratic socialist on a mission to reshape America's economy, was projected to win as expected in his home state of Vermont.

The 78-year-old senator has a fervent voter base and was still expected to rack up large numbers of delegates in the biggest states of the night, Texas and California, where polls were due to close at 4am GMT.

But for Biden, 77, the early indications were that he was on for a good night in his bid to bring American politics back to the center after four years of Trump's rightwing populism.

"They haven't buried me yet, I'm not dead. I'm back," he said in Los Angeles. "There's a real sense of momentum."

Former New York Mayor Michael Bloomberg, 78, and Massachusetts Senator Elizabeth Warren were the other big names on the ballot.

Despite spending record amounts of his own money on advertising, billionaire media entrepreneur Bloomberg appeared to be headed for an ugly night — despite a consolation win in tiny American Samoa in the Pacific.

The 14 nominating contests across the country gave the dwindling field of Democratic hopefuls a giant potential haul of delegates in their marathon struggle to win the nomination — and begin campaigning in earnest against Trump.

Many in the Democratic Party are desperate to stop Sanders' strong push to win that delegate race, saying the senator will be destroyed in a general election where Trump has signaled he will brand him a socialist bent on ending the American way of life.

Biden was practically counted out after a stumbling early campaign, but began to rebound with a landslide win in South Carolina last Saturday.

That was followed by the coordinated decisions by two other moderate candidates — Pete Buttigieg and Amy Klobuchar — to withdraw and endorse their former rival.

Bloomberg faces multiple calls from within the Democratic Party also to get out of the race and not split the centrist vote.

The New York billionaire has refused, saying "We're in it to win it."

But a weak showing on Super Tuesday would add to that pressure. Commenting on Bloomberg's feeble Virginia results, veteran political analyst Larry Sabato asked: "A hint to say bye-bye?"

Biden is making his third bid for the White House after failed runs in 1988 and 2008. He argues that he can bring a return to "decency" after the tumultuous, scandal-plagued Trump era.

Sanders' fans are convinced that only he can take on Trump, who also defied his party's establishment and more moderate wing four years ago to claim a surprise victory against Democratic heavyweight Hillary Clinton.

"We need energy. We need excitement. I think our campaign is that campaign," said Sanders.

"I mean it is just people in the establishment being afraid of things being shaken up," he said.

Sanders backers say the time has come to fight fire with populist fire, rather than repeat the mistake of 2016 when the steady but uninspiring Clinton fell to Trump's drama-filled, insurgent campaign.

Sanders went into Super Tuesday hoping to gain a near insurmountable delegate lead, perhaps delivering a knock-out blow well ahead of the party convention in Milwaukee in July.

A total of 1,357 delegates were at stake on Tuesday — a third of the nationwide total. A candidate needs 1,991 delegates to win the nomination outright.

Democrats will also be looking for turnout and other signs of enthusiasm in a country deeply divided by Trump.

California voter Brian Waters, 43, a former English teacher who is now a brewer, said he voted for Sanders because of his position on universal health care.

But he added: "I'd vote for a burning dumpster over Trump."