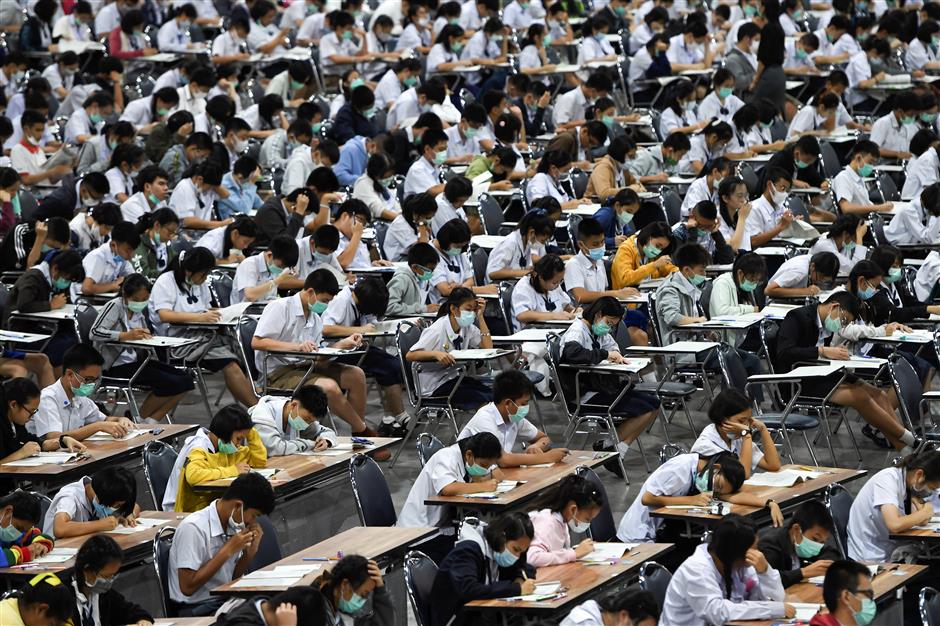 Thai students, wearing protective masks, sit for an admission exam for the Triam Udom Suksa School, a state upper-secondary school that has the largest enrolment in the country at Impact Forum Bangkok on Thursday.

Almost 300 million students worldwide faced weeks at home with Italy and India the latest to shut schools over the deadly new coronavirus.

More than 95,000 people have been infected and over 3,200 have died worldwide from the virus, which by Thursday had reached more than 80 countries and territories.

Several countries have implemented extraordinary measures, with UNESCO saying on Wednesday that school closures in over a dozen countries have affected 290.5 million children.

India, the second most populous country, on Thursday announced it was closing all primary schools in the capital New Delhi until the end of March to prevent the virus from spreading.

The orders came as an India-European Union summit set for March 13 was also postponed.

While temporary school closures during crises are not new, UNESCO chief Audrey Azoulay said “the global scale and speed of the current educational disruption is unparalleled and, if prolonged, could threaten the right to education.”

Italy on Wednesday ordered schools and universities shut until March 15, ramping up its response as national fatalities rose to 107.

South Korea — second to China in terms of infections with cases going past 6,000 on Thursday — has put off the start of the next term until March 23.

In Japan, nearly all schools are shut after Prime Minister Shinzo Abe called for classes to be canceled until April.

Iran on Thursday reported 15 new deaths from the coronavirus, raising the national toll to 107, and said it would keep schools and universities closed until early April.

“Schools and universities will be closed until the end” of the current Iranian year, health minister Saeed Namaki said in a televised press conference.

The Iranian year ends on March 19 and national holidays then last until early April.

Infections are now rising faster abroad than they are in China, where 31 more deaths and 139 new cases were reported on Thursday.

The International Monetary Fund said it was making US$50 billion in aid available for low-income and emerging-market countries to fight the epidemic, which it sees as a “serious threat” that would slow global growth to below last year’s 2.9 percent.

“At a time of uncertainty ... it is better to do more than to do not enough,” IMF chief Kristalina Georgieva said.

In the United States, lawmakers reached a deal to provide more than US$8 billion to fight the outbreak.

The US state of California declared an emergency following its first coronavirus fatality — raising the US death toll to 11 — and a cruise ship was kept offshore after passengers and crew members developed symptoms.

Thousands were stranded on the Grand Princess off the California coast on Wednesday as officials delayed its return to test on people on board.

Two passengers who traveled on the same ship on a previous voyage last month between San Francisco and Mexico later fell ill and tested positive for the coronavirus. Health officials say they probably contracted the illness aboard the vessel.

The vessel belongs to Princess Cruises, the same company which operated a coronavirus-stricken ship held off Japan last month on which more than 700 people on board tested positive, with six dying from the disease.

The US and other governments have taken extraordinary measures to contain the outbreak.

Japan will quarantine all arrivals from China and South Korea for two weeks, and suspend existing visas and limit arrivals of visitors from the two countries to Narita and Kansai International airports. The measures go into effect on Monday and last until the month-end.

He said while China and Japan are making all-out efforts to fight against the COVID-19 epidemic, both sides agreed that it must be ensured President Xi’s visit shall come at the most opportune time with the right conditions and atmosphere to achieve a complete success.