Warren, once a frontrunner, ends her US presidential campaign 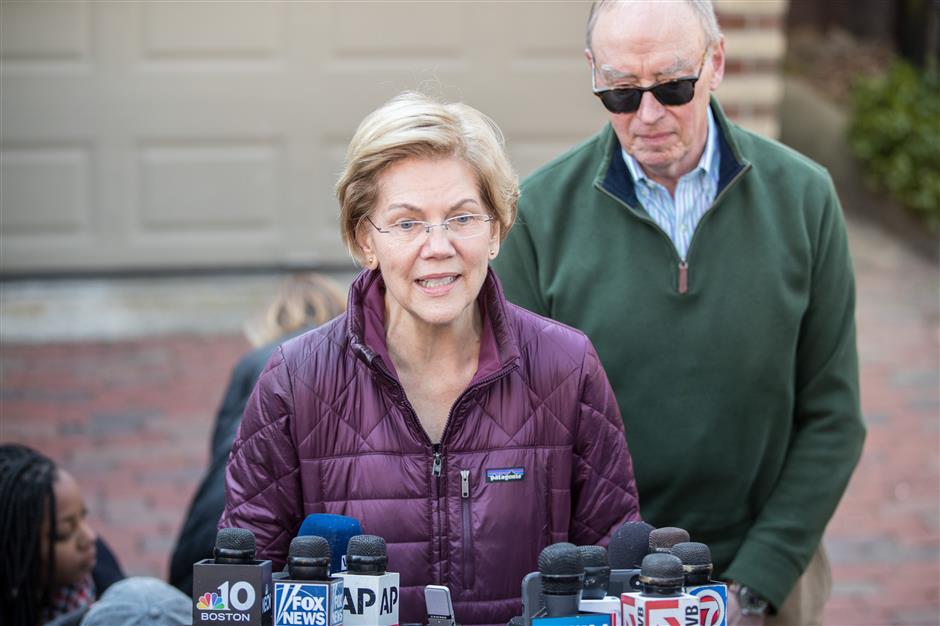 Democratic presidential candidate Senator Elizabeth Warren, with husband Bruce Mann, announces that she is dropping out of the presidential race during a media availability outside of her home on March 5 in Cambridge, Massachusetts.

Massachusetts Senator Elizabeth Warren, once a favorite to win the Democratic presidential nomination, dropped out of the race on Thursday, setting up a two-man duel between Joe Biden and Bernie Sanders.

"I am suspending my campaign for president," the 70-year-old progressive lawmaker announced following her disappointing performance in the Super Tuesday primaries.

"But I guarantee I will stay in the fight for the hardworking folks across the country who have gotten the short end of the stick," Warren told reporters outside her home in Cambridge, Massachusetts.

"That's been the fight of my life and it will continue to be so."

Warren said she was not ready to endorse either of the two remaining major candidates — Biden, the 77-year-old former vice president, or Sanders, the 78-year-old leftist senator from Vermont.

"We don't have to decide that this minute," she said. "I want to take a little time."

Warren's withdrawal leaves only one woman in the Democratic field, Tulsi Gabbard, but the Hawaii congresswoman has never been a significant factor, polling at less than 1 percent.

Warren said she regretted there would not be a woman in the top spot on the Democratic ticket against Republican Donald Trump in November.

"The hardest part of this is all those little girls who are going to have to wait four more years," she said.

Minnesota Senator Amy Klobuchar pulled out of the race this week and two other female senators — Kamala Harris of California and Kirsten Gillibrand of New York — dropped out earlier.

Warren was asked whether being a woman had something to do with her lackluster performance at the polls.

"If you say, 'Yeah, there was sexism in this race,' everyone says, 'Whiner,'" she said. "And if you say, 'No, there was no sexism,' about a bazillion women think, 'What planet do you live on?'"

"I promise you this, I'll have a lot more to say on that subject," she said.

Biden and Sanders both praised Warren in tweets following her announcement.

"Senator @EWarren is the fiercest of fighters for middle class families," Biden said. "Her work in Washington, in Massachusetts, and on the campaign trail has made a real difference in people's lives.

"We needed her voice in this race, and we need her continued work in the Senate."

"Without her, the progressive movement would not be nearly as strong as it is today."

Warren's withdrawal came after she failed to win a single state on Super Tuesday, including her own, Massachusetts.

Her decision to quit the race came one day after that of billionaire former New York Mayor Michael Bloomberg, who dropped out after a disappointing Super Tuesday showing of his own and endorsed fellow centrist Biden.

Trump responded to Warren's withdrawal with a tweet mocking her and Bloomberg.

"Elizabeth 'Pocahontas' Warren, who was going nowhere except into Mini Mike's head, just dropped out of the Democrat Primary...THREE DAYS TOO LATE," Trump said.

"She cost Crazy Bernie, at least, Massachusetts, Minnesota and Texas," the president said of three of the states at stake on Super Tuesday. "Probably cost him the nomination!"

'I have a plan for that'

Warren led some national polls last summer but never managed to build a broad coalition to carry her through to success in the primaries.

She made her mark in the race on policy strengths but was quickly overshadowed on the left by Sanders, making his second bid for the nomination after losing out to Hillary Clinton in 2016.

"I felt that wasn't right, but evidently I was wrong."

Her experience as a number-crunching people's advocate helped project her early image as a can-do policy wonk and she quickly became associated with the catchphrase "I have a plan for that."

One of the most notable moments of Warren's campaign was her debate evisceration of Bloomberg, something she alluded to on Thursday.

"In this campaign, we have been willing to fight, and, when necessary, we left plenty of blood and teeth on the floor," she said. "And I can think of one billionaire who has been denied the chance to buy this election."