Quarter of Italians on lockdown as virus sweeps globe 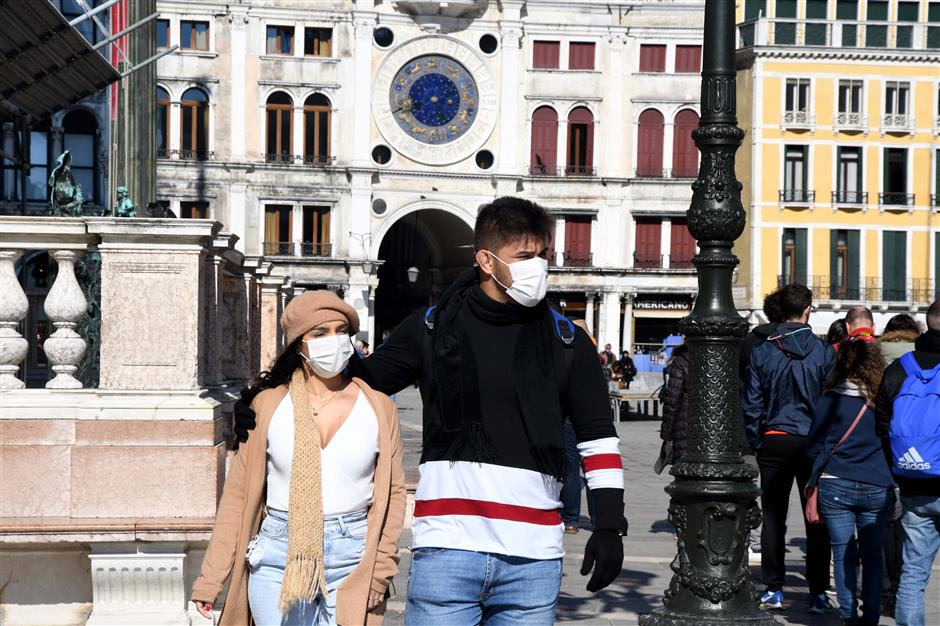 A quarter of the Italian population was in lockdown on Sunday as the government took drastic steps to stop the spread of the deadly coronavirus sweeping the globe, while Iran recorded another 49 deaths and the national airline suspended flights to Europe.

Italy's COVID-19 death count is now 233, more than any other country outside China.

The outbreak has now killed more than 3,500 people and infected over 105,000 across 95 countries and territories.

Italy's measures, in place until April 3, bar people from entering or leaving vast areas of northern Italy without good reason, according to a decree published online.

The quarantine zones are home to more than 15 million people and include the regions around Venice and financial capital Milan. Cinemas, theatres and museums will be closed nationwide.

The World Health Organization praised Italy for its "bold, courageous steps", according to a tweet by its boss Tedros Adhanom Ghebreyesus.

The lockdown does allow for the return home of those who were in the affected areas but live elsewhere, including tourists.

Flights appeared to be operating normally out of Milan and Venice airports and it was also business as usual at train stations.

The borders with Austria, Switzerland and Slovenia remain open.

Pope Francis, meanwhile, expressed solidarity on Sunday with the victims of the virus in his first livestreamed prayer and message from the Vatican.

"I join my brother bishops in encouraging the faithful to live this difficult moment with the strength of faith, the certainty of hope and the fervour of charity," he said.

This brings the number of those killed by the virus in the country since mid-February to 194, one of the highest tolls outside of China. The virus has spread to all of Iran's 31 provinces with 6,566 confirmed cases.

Iran Air announced the suspension of all its flights to Europe until further notice, possibly in retaliation against Sweden's decision to block Iran flights from landing for fear of importing the disease.

In the US, the contagion has spread to 30 states, killing at least 19 people, with New York announcing a state of emergency.

Passengers on the US cruise ship Grand Princess, in which 21 of the 3,533 on board tested positive for the disease, will remain confined to their cabins in waters off San Francisco until Monday when she has been allowed to dock in Oakland.

Meanwhile another cruise ship, the Costa Fortuna, was turned away by Malaysia and Thailand due to virus fears, an official said Sunday. The boat is carrying around 2,000 people, including dozens of Italians.

Bulgaria reported its first case on Sunday, following Colombia, Costa Rica, Malta and the Maldives earlier in the weekend.

The number of infections in South Korea has passed 7,000 — the highest in the world outside China.

But in China itself, the number of new cases reported Sunday was the lowest in weeks, with nearly all 44 of them in Wuhan, the capital of Hubei province and epicentre of the outbreak.

The government has hinted it may soon lift the quarantine imposed on Hubei, where some 56 million people have been effectively housebound since late January.

The only infections in China beyond Hubei were imported from abroad, including arrivals from Italy and Spain in Beijing.

At least 10 people were killed on Sunday, however, in the collapse of a hotel used as a coronavirus quarantine facility in Quanzhou, in soueastern China.

The WHO said the efforts of China and other countries were "demonstrating that spread of the virus can be slowed."

Saudi Arabia said Sunday it was cordoning off eastern Qatif region, a stronghold of the kingdom's Shiite minority.

The Saudi bourse, the largest in the region, dived by nearly eight percent just after the opening bell.

Organizers of Bahrain's Formula 1 Grand Prix scheduled for March 22 said the race would go ahead without spectators.

The Shanghai Grand Prix, slated for April 19, has already been postponed although the season-opening race in Australia on March 15 is set to go ahead as planned.

The Asian Champions League was put on temporary hold on Sunday, while Italy's sports minister a called for an immediate suspension of the Serie A season.