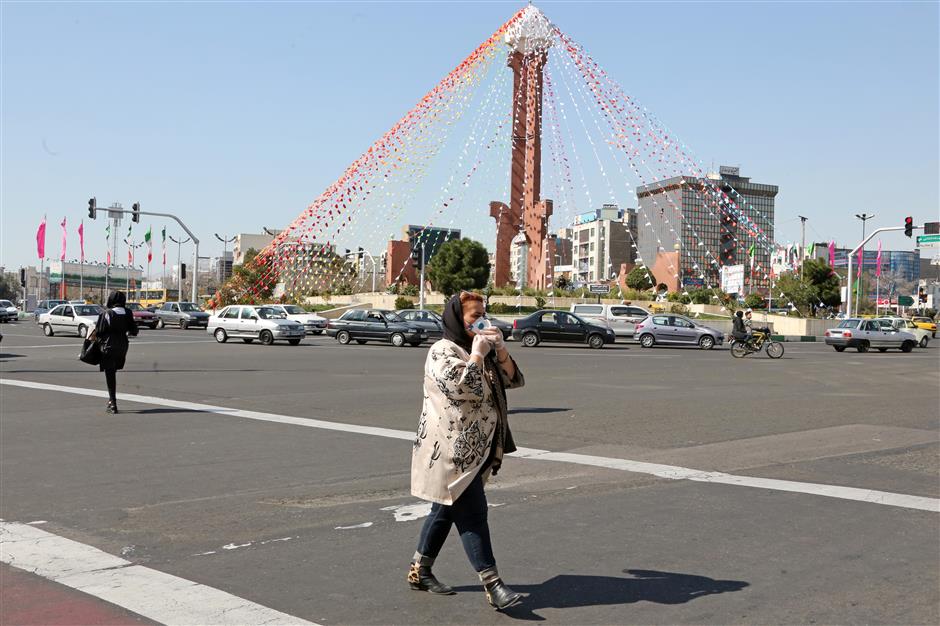 An Iranian pedestrian crosses a street while wearing a protective mask in Tehran on March 10, 2020, amid the spread of coronavirus in the country.

The death toll from the novel coronavirus epidemic in Iran rose to 291 on Tuesday, while Lebanon and Morocco registered their first death from COVID-19 infection.

Iran's Ministry of Health and Medical Education reported 881 new COVID-19 cases and 54 more deaths on Tuesday. So far, a total of 8,042 people have been infected in Iran, of whom 2,731 have recovered, since the first cases were confirmed on February 19.

Iran's Parliament Speaker Ali Larijani, in separate telephone conversations with his Kuwaiti and Omani counterparts, called for regional cooperation to stem the spread of the novel coronavirus.

In separate letters to the heads of the Inter-Parliamentary Union, the Organisation of Islamic Cooperation, the Asian Parliamentary Assembly and also parliament speakers of Asian and Islamic countries, Larijani also called for international efforts to lift what he called "inhuman" US sanctions against Iran that hinder its fight against the raging epidemic.

In Beirut, Lebanese Health Minister Hamad Hassan announced the first death from COVID-19 in the country, which involved a person who came from Egypt a few days ago. No further details were revealed.

In Rabat, Morocco's Ministry of Health said in a statement that an 89-year-old woman died in Casablanca from the novel coronavirus, becoming the first such death in the country.

Elsewhere in the Middle East, several other countries reported new cases of coronavirus infection on Tuesday.

The new cases included three from Italy, two each from the UAE, Britain, Sri Lanka and India, and the remaining four from Germany, Tanzania, South Africa and Iran.

In Israel, the Ministry of Health announced that eight more Israelis were diagnosed with the coronavirus, bringing the total number of COVID-19 patients in the country to 58.

In Cairo, Egyptian Health Minister Hala Zayed reported five new COVID-19 cases, as the total number of the infected patients rose to 59, including 33 Egyptians and 26 foreigners.

The Palestinian Authority reported four new cases of COVID-19, bringing the total number of the infected patients to 30. All the new cases were confirmed in the West Bank tourist city of Bethlehem.

In Tunis, the Tunisian Health Ministry announced a new COVID-19 case, which is the sixth confirmed one in the country.

Morocco on Tuesday reported the third case of COVID-19 infection, a French tourist who arrived on Saturday in Marrakech in central Morocco.

To prevent the spread of the coronavirus, Israeli Ministry of Transport announced on Tuesday to close the train station at the Ben-Gurion International Airport for passengers arriving from abroad, starting from Wednesday.

The Israeli government also instructed the public to refrain from holding events with over 2,000 people, such as the sports games, while banning visits to hospitals and nursing homes.

The Moroccan government announced the suspension of all flights to and from Italy, which is the most severely hit country by the coronavirus in Europe.

Palestine on Tuesday announced the suspension of travels from the West Bank to Jordan as part of its efforts to control the spread of the coronavirus.

Algerian Ministry of Sports and Youth said all local sport events will be organized in closed doors, while all international competitions due to be held in the country have been postponed to stop the spread of the coronavirus.

On the positive side, the Iraqi Health Ministry on Tuesday announced that 15 people infected with the novel coronavirus have recovered. So far Iraq reported 66 COVID-19 cases, of whom seven have died.

In Damascus, Syrian Health Minister Wahbeh Yazagi said no novel coronavirus case has been registered in Syria. As a precaution, Syria suspended flights to Iran and Iraq on Monday to prevent the spread of coronavirus.

Meanwhile, Egypt's Housing Ministry said the COVID-19 outbreak has no impact on the projects implemented by Chinese companies in Egypt, especially the new administrative capital.

"There is no problem at all with the projects that the Chinese companies have been carrying out in Egypt, including the construction of the Central Business District which is the focus of the first phase of the new administrative capital," the ministry's spokesman Amro Khatab told Xinhua in an interview.

Khatab said China State Construction Engineering Corporation is working with full capacity on the CBD project, some 50 km east of the capital Cairo, through taking strong preventive measures to protect the workers on site from the COVID-19.