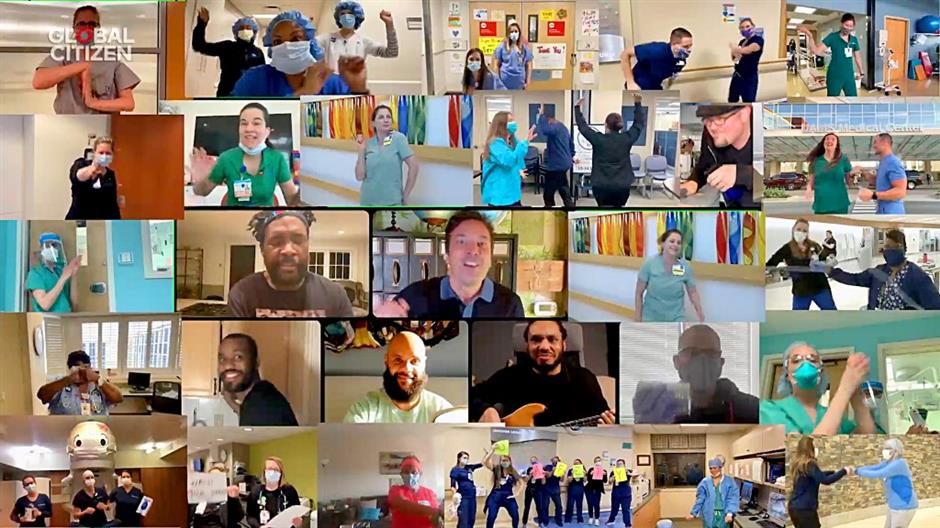 In this screengrab, Jimmy Fallon (C) sings with musical group The Roots and frontline medical Workers during "One World: Together At Home" presented by Global Citizen on April, 18, 2020. The global broadcast and digital special was held to support frontline healthcare workers and the COVID-19 Solidarity Response Fund for the World Health Organization, powered by the UN Foundation.

A virtual concert packed with A-listers — from The Rolling Stones to Taylor Swift to Billie Eilish — entertained fans around the world with a show celebrating health workers, as billions shelter at home due to coronavirus. 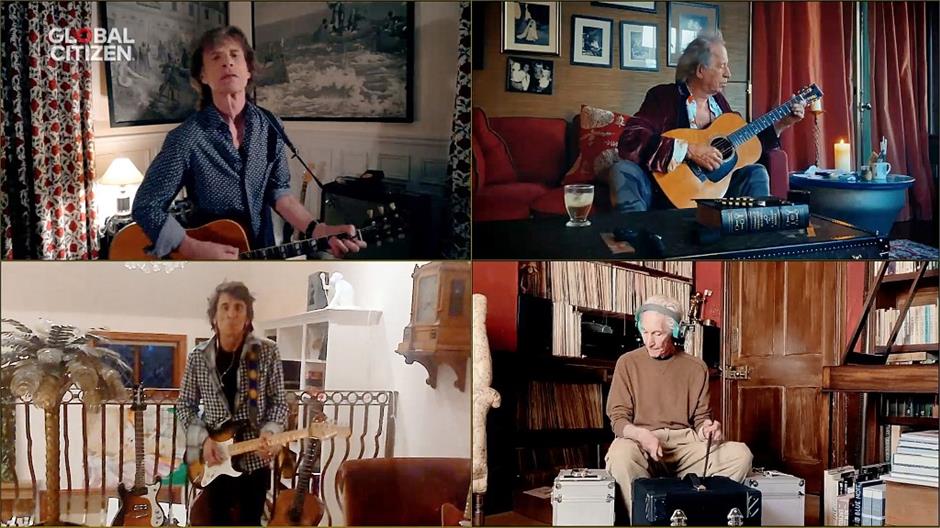 In this screengrab, Mick Jagger, Keith Richards, Ronnie Wood and Charlie Watts of musical group "The Rolling Stones" perform during "One World: Together At Home" presented by Global Citizen on April, 18, 2020.

Before opening the show Lady Gaga — who began working with Global Citizen and the WHO weeks ago to fundraise for the battle against COVID-19 — said she was praying for medical workers and also "thinking of all of you that are at home, who are wondering when this is all going to be different."

"What I'd like to do tonight, if I can, is just give you the permission to, for a moment — smile," she said as she broke into a rendition of Nat King Cole's "Smile."

Stevie Wonder then wowed with a tribute to the late soul legend Bill Withers.

Sitting at his home piano Wonder, who turns 70 next month, played "Lean On Me" before launching into his own "Love's In Need Of Love Today" in his singular crystal-clear voice.

Mick Jagger also appeared ageless despite his 76 years as he delivered the classic "You Can't Always Get What You Want," as his fellow Stones played from their respective homes, including a grinning Charlie Watts on the air drums.

Also at her piano Swift played the vulnerable "Soon You'll Get Better," which the pop phenom wrote about her mother's struggles with cancer.

Global Citizen intended the primetime event broadcast on major television networks worldwide — and hosted by American late-night television personalities Jimmy Fallon, Jimmy Kimmel and Stephen Colbert — not as a fundraiser but as a moment of unity through song.

They also planned it as a "rallying cry" to support health workers, while coronavirus has at least 4.5 billion people forced or urged to stay home.

Prior to the event Global Citizen began urging philanthropists, companies and governments to support the WHO in its coronavirus response efforts, saying it has raised $35 million for local organizations and the international health body's COVID-19 Solidarity Response Fund.

In addition to performances — McCartney played "Lady Madonna," as Lizzo belted out a powerful version of "A Change Is Gonna Come" — the event highlighted the efforts of essential workers worldwide, including medical personnel and those delivering food and sanitary products to vulnerable populations.

None other than Queen Bey herself joined in to thank "true heroes" who are "away from their families, taking care of ours."

Beyonce, a Houston native, also emphasized that the coronavirus pandemic in the United States is disproportionately affecting black Americans, who make up a large part of "essential parts of the workforce that do not have the luxury of working from home," she said.

Indian actor Shah Rukh Khan and Nigerian singer Burna Boy were among the participants in the event that included former US first ladies Michelle Obama and Laura Bush as well as media personality and philanthropist Oprah.

British actor Idris Elba — who was diagnosed with and recovered from coronavirus — also took part.

"Tonight, through the universal language of music, we salute the bravery and sacrifice of health heroes and others," said UN Secretary General Antonio Guterres in a clip played during the broadcast.

"And please join our call for a global ceasefire to focus on our common enemy — the virus."

Saturday's online festivities kicked off with a six-hour pre-show streamed online, with stars across the globe including Christine and the Queens, Jennifer Hudson, Matthew McConaughey, Luis Fonsi and Kesha making appearances.

And New Yorker Sarah Jessica Parker of "Sex and the City" fame gave a shout out from her couch to medical workers toiling at the city's particularly hard-hit hospital Elmhurst.

Dressed in scrubs, Aisha al Muntheri spoke from Paris to say she was proud to serve "on the front lines with my colleagues."

"It's part of our value in medicine to serve humanity," she said.

"The humanity is our common language."