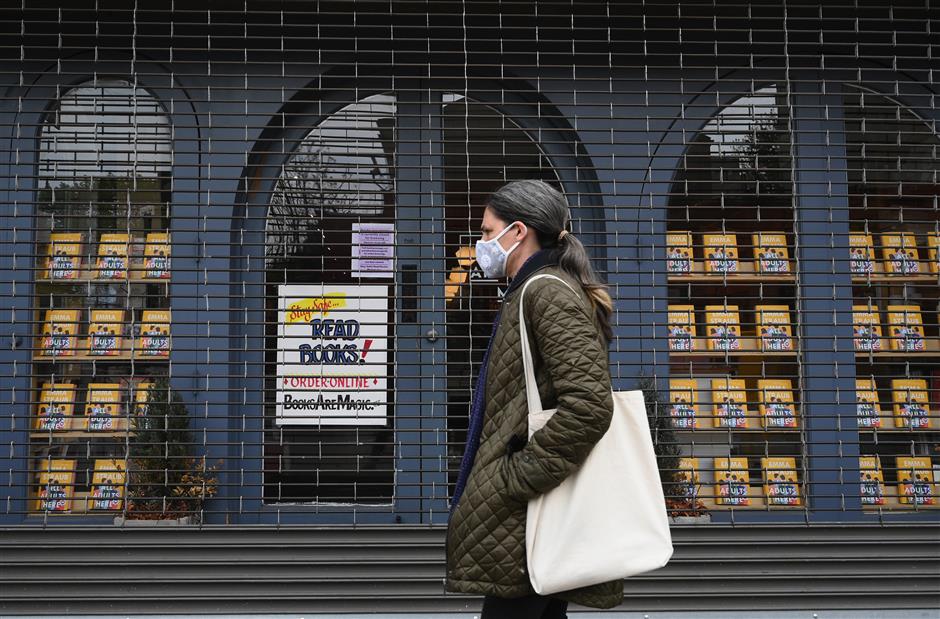 A woman walks by the closed "Books Are Magic" bookstore on May 5, 2020, in the Brooklyn borough of New York City.

The number of COVID-19 deaths in the United States topped 70,000 on Tuesday, representing over a quarter of all the virus deaths reported worldwide, as Americans give negative marks for the federal government's handling of the outbreak.

The US novel coronavirus death toll reached 70,115 as of 2:15pm (6:15pm GMT), according to the Center for Systems Science and Engineering at Johns Hopkins University.

The country has reported 1,192,119 cases of infections, also the highest in the world, showed the tally.

While Americans overwhelmingly think highly of what federal scientists have done to deal with the contagion, they continue to give President Donald Trump negative marks for his handling of the coronavirus outbreak, showed The Washington Post-University of Maryland poll released on Tuesday.

The poll surveyed a random national sample of 1,005 adults by phone from April 28 to May 3. It has a 3.5-point margin of error.

The nation's top infectious disease expert gained approval from more than two-thirds of Republicans and independents, and nearly 9 in 10 Democrats.

Trump's ratings are 44 percent positive and 56 percent negative, with nearly 80 percent Republicans but just about 20 percent Democrats viewing Trump positively as relates to the pandemic, said the poll.

Also, the poll indicated a majority of Americans oppose reopening most businesses despite such measures are being taken in a phased manner in more and more states across the country.

Respondents are most opposed to reopening movie theaters, with 82 of them saying so. Meanwhile, 78 percent said they don't want gyms to reopen, while 74 percent are opposed to the reopening of dine-in restaurants and nail salons.

Trump said Tuesday that he will allow 79-year-old Fauci, a key member of the White House coronavirus response team, to testify before the Republican-controlled Senate next week, but that the expert will be barred from appearing in the House, where the Democrats hold a majority.

After weeks of shutdown measures, many US states have begun to slowly open up. But health experts have expressed concerns that premature opening could lead to a spike in new COVID-19 infections.

An influential COVID-19 model produced by the University of Washington revised its projections on Monday, estimating more than 134,000 COVID-19 deaths in the United States through August.

The revised projections reflect rising mobility in most US states as well as the easing of social distancing measures expected in 31 states by May 11, indicating that growing contacts among people will promote transmission of the coronavirus, according to the Institute for Health Metrics and Evaluation (IHME).

There is "no scientific backing" for the two claims floated recently by some US politicians that COVID-19 could be human-made and have escaped from a laboratory, US experts including Fauci have said.

"If you look at the evolution of the virus in bats, and what's out there now is very, very strongly leaning toward this (virus) could not have been artificially or deliberately manipulated — the way the mutations have naturally evolved," Fauci told National Geographic in an interview posted Monday night.

"A number of very qualified evolutionary biologists have said that everything about the stepwise evolution over time strongly indicates that it evolved in nature and then jumped species," he said.

Asked about the possibility that the virus was found outside the lab, then brought back and escaped, Fauci said, "That means it (virus) was in the wild to begin with."

"That's why I don't get what they're talking about (and) why I don't spend a lot of time going in on this circular argument," he said.

The start of the COVID-19 pandemic is "highly unlikely a lab accident," according to Jonna Mazet, an epidemiologist at the University of California, Davis, who has worked with and trained researchers at the Wuhan Institute of Virology.

"We worked together to develop very stringent safety protocols, and it's highly unlikely this was a lab accident," said Mazet, who listed four reasons against the ungrounded assertion in an article published on Sunday by Business Insider, a leading news website in the United States.

The first reason, she said, is that "the lab's samples don't match the new coronavirus."

Mazet has worked with Shi Zhengli, a virologist at the WIV, through PREDICT, a pandemic early-warning program started by the US Agency for International Development.

"I've spoken to her recently," Mazet said of Shi. "She is absolutely positive that she had never identified this virus prior to the outbreak happening."

Secondly, the WIV implements rigorous safety protocols that are "above reproach."

After a series of disinfection procedures, researchers only use the deactivated, non-infectious samples, and the containers with viable virus are locked down in a special area, she added.

"Rather than a leak," Mazet said of the third reason, "the novel coronavirus is more likely the latest disease to have jumped from an animal to humans."

Mazet said that the 2003 SARS outbreak, Ebola and the H1N1 "swine flu" pandemic are all caused by viruses originated in other species, which are known as zoonotic diseases.

Genetic research has all but confirmed that the virus causing COVID-19 originated in nature, she said, noting that a study published in February found that it shares 96 percent of its genetic code with coronaviruses circulating in bat populations.

As for the fourth reason, Mazed noted that everyday people are more likely to get infected than researchers who wear protection, which indicates that a leak from a lab is implausible.

Tourists, hunters and other people who rely on animals in some capacity for food or trade wander into wild habitats less protected and are therefore exposed to the live viruses circulating in the animals.

The frequency of cross-species infections "will increase as humans encroach further into wild habitats that house disease-carrying species we haven't interacted with before," added Mazet.