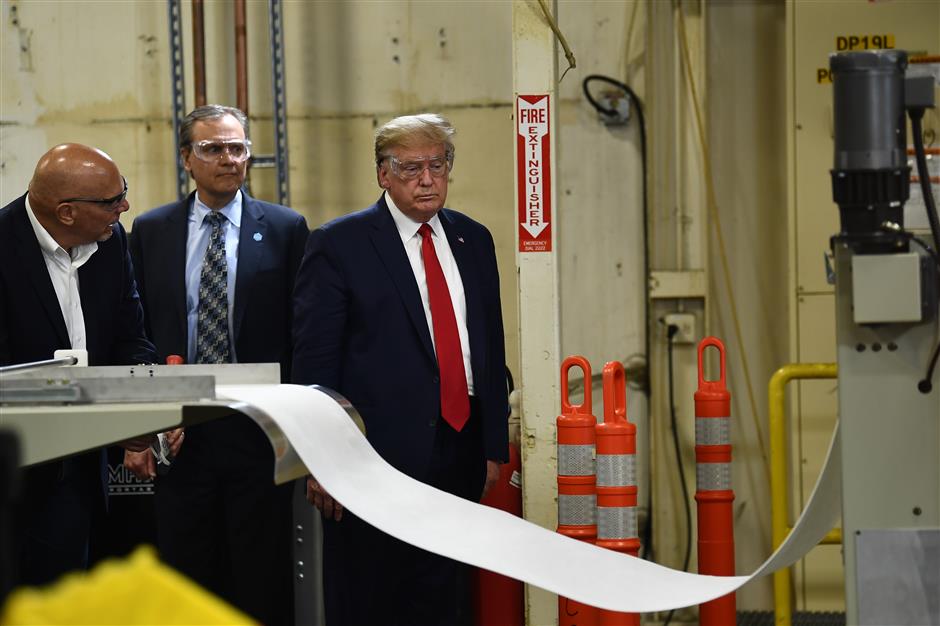 US President Donald Trump (right) participates in a tour of a Honeywell International plant that manufactures personal protective equipment in Phoenix, Arizona, on May 5.

President Donald Trump conceded on Tuesday that more Americans will die in reopening the US economy but underlined his insistence on a dwindling coronavirus threat by refusing to wear a mask, even as he toured a mask-making factory.

Asked by ABC News whether a lifting of social distancing measures and reopening of the shuttered economy will lead to higher death tolls, Trump said "it's possible there will be some."

"Because you won't be locked into an apartment or a house or whatever it is," Trump said at the Honeywell factory in Phoenix, Arizona, which he visited on his first major trip since the coronavirus lockdown began.

"Will some people be affected badly? Yes," he admitted earlier at the factory. "But we have to get our country open."

Trump's November reelection campaign is reeling from the massive shutdown ordered to try and stop the spread of the virus, which has already killed 70,000 Americans and is forecast to take tens of thousands more lives.

Praising the Honeywell workers, who churn out masks used by medical staff and other first responders, Trump reiterated that it's time to look ahead.

"I want to be a cheerleader," he said.

Bolstering that shift of direction, the White House said that Trump's emergency coordination group for the pandemic would be disbanding, probably by early June.

Trump's audience at Honeywell sat masked in compliance with US government recommendations and their own company rule, which was clearly displayed on a sign in the facility reading: "Please wear your mask at all times."

Trump had teased as he left Washington that after months of resistance he might finally cover his face.

The fact that he skipped the opportunity to make a statement about safety was in line with his new focus on getting Americans to return to work.

And he has been skeptical about masks since early on.

But the president, tuned closely into his loyal right-wing base, has used his massive visibility to downplay the need.

"I think wearing a face mask as I greet presidents, prime ministers, kings, queens, I don't know," he said in April, apparently suggesting a mask would be unpresidential. "Somehow, I don't see it for myself."

Trump's Arizona mask moment came after his vice president, Mike Pence, caused an uproar a week ago when he was photographed maskless during a visit to the famous Mayo Clinic hospital in Rochester, Minnesota, which requires visitors to cover up.

Pence — unusually for a member of the Trump administration — publicly admitted he'd been wrong.

"I didn't think it was necessary, but I should have worn a mask," he said on Sunday.

On a subsequent trip, Pence did wear a mask.

The White House says that because top officials and their guests are frequently tested for the coronavirus they generally don't need to follow the guidance.

However, the controversy runs deeper, reflecting a dispute over facts that has turned swaths of the United States into camps where the left and right see different basic realities.

Polls show that Democrats support face covering as a sign of shared responsibility, while some Republicans see mask-wearing orders as a big government threat to individual liberty.

In Stillwater, Oklahoma, and other cities, local leaders abandoned orders to wear masks after threats of violence.

A common slogan at the protests now is that the entire pandemic is a "hoax."