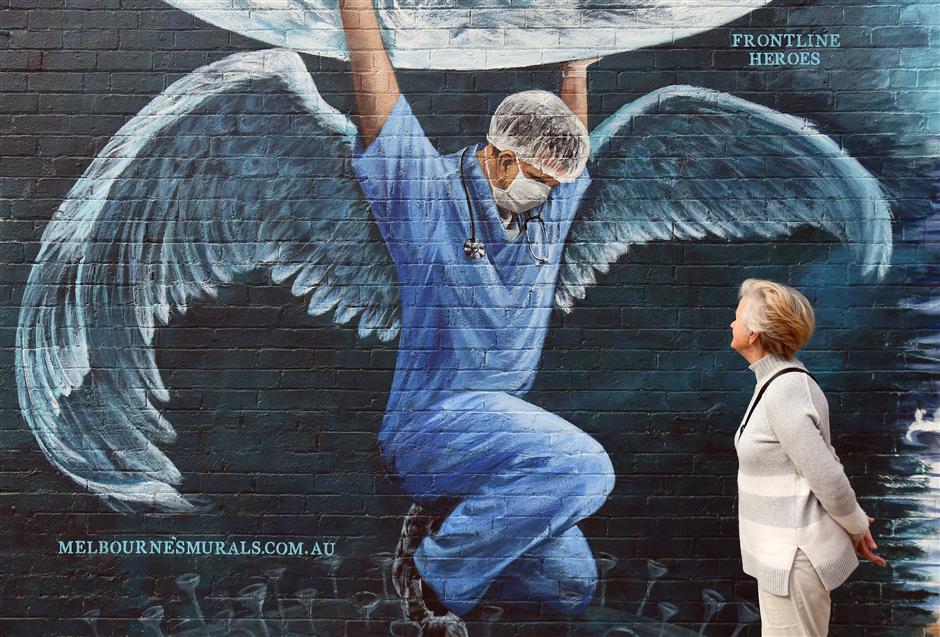 A woman looks at a mural of a health worker with wings holding a globe on International Nurses Day in Melbourne on May 12, 2020.

Thousands of frontline doctors and nurses in Australia will take part in a widespread clinical trial of hydroxychloroquine, a controversial drug that has been claimed to defend against COVID-19.

Announced on Wednesday and codenamed, the study COVID SHIELD will be led by Walter and Eliza Hall Institute of Medical Research (WEHI) in Melbourne, and funded by the Australian government.

Co-leader of the study, Professor Ian Wicks from the Royal Melbourne Hospital told Xinhua that hydroxychloroquine had been trialed before as a treatment for COVID-19, but the study was the first to test the drug as a preventive measure against the virus.

"As far as we are aware, it is the first double-blind, placebo-controlled trial to test for prevention," he told Xinhua. "We are hopeful this Australian trial will provide a definitive answer to this question."

During the four-month trial period, half of the 2,250 participants will be given hydroxychloroquine, while the other half will receive a placebo tablet.

"The trial is focused on our frontl-ine and allied healthcare workers who are at an increased risk of infection due to repeated exposure caring for sick patients. Our aim is to help people stay safe, well and able to continue in their vital roles," Pellegrini said.

Earlier this week, the United States President Donald Trump revealed that he had been taking hydroxychloroquine himself for a number of weeks, despite inconclusive evidence to its effects and concerns for potential public misuse.

However, the drug has been widely prescribed by doctors in the past 50 years to treat diseases like malaria, lupus and rheumatoid arthritis, meaning that potential side effects are largely known and manageable within a clinical setting.

"Rheumatologists are very comfortable with the drug's safety profile. Like any medication, hydroxychloroquine has certain side effects, but fortunately, these are well known and quite uncommon," Wicks said.

"The medical specialists conducting COVID SHIELD are highly experienced in using hydroxychloroquine in the clinic. All participants will be screened based on rigorous selection criteria and closely monitored throughout the trial to ensure safety."