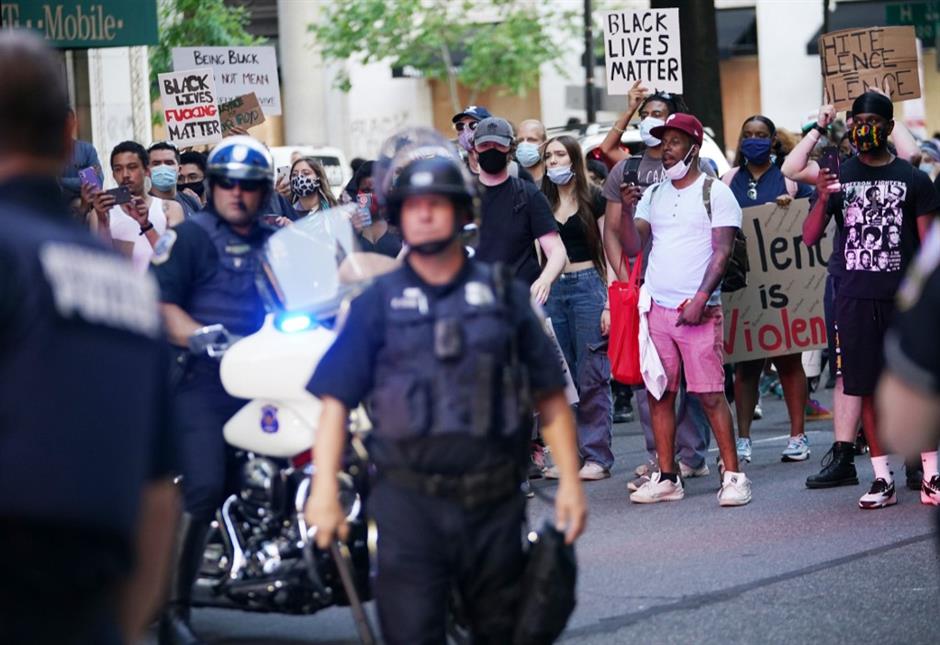 Protestors face off with police on 15th and H Street in Washington, DC on May 31, 2020. Thousands of National Guard troops patrolled major US cities after five consecutive nights of protests over racism and police brutality that boiled over into arson and looting, sending shock waves through the country. The death Monday of an unarmed black man, George Floyd, at the hands of police in Minneapolis ignited this latest wave of outrage in the US over law enforcement's repeated use of lethal force against African Americans — this one like others before captured on cellphone video.

Anti-racism protestors again took to the streets in cities across the United States Sunday to voice their fury at police brutality as the Trump administration branded the instigators of five nights of rioting domestic terrorists.

While local leaders appealed to citizens to give constructive outlet to their rage over the death of an unarmed black man, night-time curfews were again imposed in cities such as Los Angeles, Houston and Minneapolis, which has been the epicenter of unrest.

Thousands of National Guards troops have been deployed across the country in a bid to restore calm but protesters and police were involved in stand-offs in several cities while there were also fresh reports of looting.

The most closely-watched protest was outside the state capitol in Minneapolis' twin city of St. Paul where several thousand people gathered before marching down a highway.

"We have black sons, black brothers, black friends, we don't want them to die. We are tired of this happening, this generation is not having it, we are tired of oppression," said Muna Abdi, a 31-year-old black woman who joined the protest.

"I want to make sure he stays alive," she added in reference to her son aged three.

Hundreds of police and National Guard troops were deployed ahead of the protest although there were no immediate reports of unrest.

There were other large-scale protests in cities such as Miami and Washington DC where riot police lined up outside the White House as the crowds gathered at a nearby park.

While there was no immediate repeat of the large-scale violence that has rocked cities in recent days, looters ransacked stores in a neighborhood of Philadelphia.

And in the Los Angeles suburb of Santa Monica, looting was reported at stores in a popular beachside shopping center with people running out of stores that had been broken into.

Officials in LA -- a city scarred by riots over the police killing of Rodney King nearly three decades ago -- imposed a curfew from 4:00 pm Sunday until dawn.

The shocking videotaped death Monday of an unarmed black man, George Floyd, at the hands of police in Minneapolis ignited the nationwide wave of outrage over law enforcement's repeated use of lethal force against unarmed African Americans.

Floyd stopped breathing after Minneapolis police officer Derek Chauvin knelt on his neck for nearly nine minutes. Chauvin has been charged with third-degree murder; three other officers with him have been fired but for now face no charges.

Walz extended a curfew for a third night Sunday and praised police and guardsmen for holding down violence, saying, "They did so in a professional manner. They did so without a single loss of life and minimal property damage."

"Congratulations to our National Guard for the great job they did immediately upon arriving in Minneapolis, Minnesota, last night," President Donald Trump said in a tweet adding that they "should be used in other States before it is too late!"

The Department of Defense said that around 5,000 National Guard troops had been mobilized in 15 states as well as the capital Washington, with another 2,000 on standby.

The widespread resort to uniformed National Guards units is rare, and it evoked disturbing memories of the rioting in US cities in 1967 and 1968 in a turbulent time of protest over racial and economic disparities.

Trump blamed the extreme left for the violence, saying he planned to designate a group known as Antifa as a terrorist organization.

"The violence instigated and carried out by Antifa and other similar groups in connection with the rioting is domestic terrorism and will be treated accordingly," added Attorney General Bill Barr.

'A nation in pain'

But Atlanta Mayor Keisha Lance Bottoms said that Trump, who has often urged police to use tough tactics, was not helping matters.

"We are beyond a tipping point in this country, and his rhetoric only enflames that," she said on CBS. "And he should just sometimes stop talking."

Democratic presidential candidate Joe Biden visited the scene of an anti-racism protest in the state of Delaware on Sunday.

"We are a nation in pain right now, but we must not allow this pain to destroy us," Biden wrote on Twitter, posting a picture of him speaking with a black family at the cordoned-off site where a protesters had gathered on Saturday night.

"As President, I will help lead this conversation -- and more importantly, I will listen."

Police in Houston, Texas, made more than 130 arrests overnight. The Denver mayor said people had been stopped while bringing "assault weapons, handguns (and) baseball bats" into the city.

In New York, Mayor Bill de Blasio said a video showing a police car forcing its way through protesters in Brooklyn was "upsetting" but that he did not blame the officers, who faced "an extremely dangerous situation."

But unlike other mayors, de Blasio declined to declare a curfew and said he opposed bringing in "outside military forces" to help local police.

The death of Floyd has triggered protests beyond the US, with hundreds rallying outside the US embassy in London on Sunday in solidarity.

"I'm here because I'm tired, I'm fed up with it. "When does this stop?" Doreen Pierre told AFP at the London protest.

In Germany, England football internatinal Jadon Sancho marked one of his three goals for Borussia Dortmund against Paderborn by lifting his jersey to reveal a T-shirt bearing the words "Justice for George Floyd".