Two-month delay for next year's Academy Awards due to pandemic 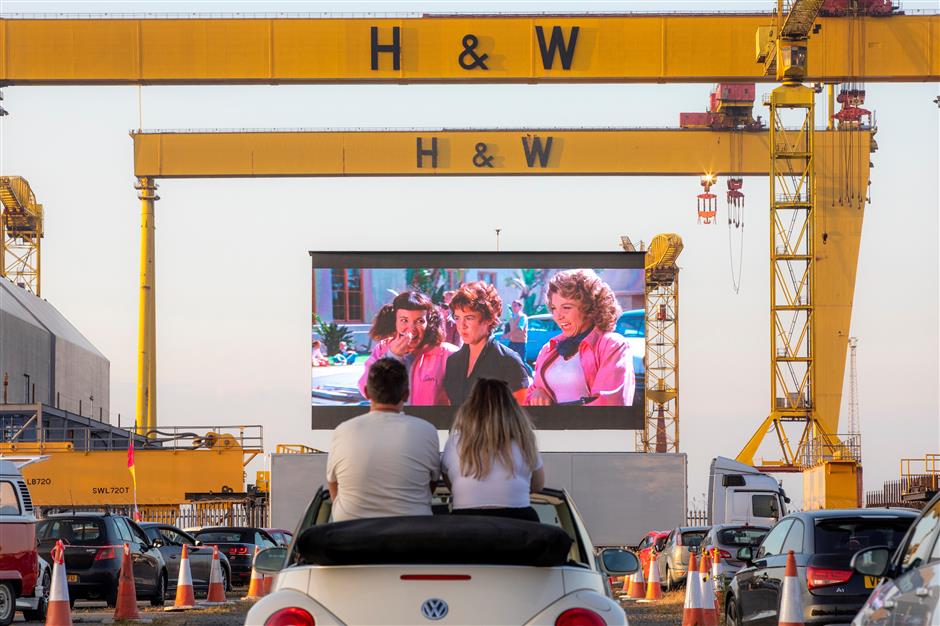 People watch the film, Grease, from their cars at a temporary drive-in cinema situated by the iconic Harland and Wolff cranes at Belfast shipyard in Northern Ireland. Most movie theaters remain closed worldwide and film productions have ground to a halt.

Next year’s Oscars have been postponed by eight weeks to April 25 after the coronavirus pandemic shuttered movie theaters and wreaked havoc on Hollywood’s release calendar, the Academy announced on Monday.

With many studio blockbusters and indie arthouse movies forced to push back their release dates until theaters reopen, the cutoff date for Oscar-eligible films has been extended by two months to the last part of February.

“Our hope, in extending the eligibility period and our Awards date, is to provide the flexibility filmmakers need to finish and release their films without being penalized for something beyond anyone’s control,” said Academy President David Rubin and CEO Dawn Hudson in a statement.

The movie industry’s biggest night was originally scheduled for February 28, 2021.

Monday’s move was prompted by concerns that a field consisting only of films released in 2020 would not be as broad or competitive as in previous years.

Most American movie theaters remain closed, and film productions have ground to a halt, with fears mounting of a second wave of COVID-19 cases.

Productions slowly restarting in the coming weeks as lockdown restrictions ease will now have two extra months to finish without having to sacrifice their Oscar hopes.

The delay also boosts hopes that the 93rd Academy Awards can remain a live, star-studded ceremony rather than shifting to a virtual presentation.

“We find ourselves in uncharted territory this year and will continue to work with our partners at the Academy to ensure next year’s show is a safe and celebratory event,” said Karey Burke, president of ABC Entertainment, which will broadcast the show in the United States.

The Oscars have been postponed before — after Los Angeles flooded in 1938, Martin Luther King Jr’s assassination in 1968 and the shooting of President Ronald Reagan in 1981 — but never by more than a week.

The Academy — seen as the apex body of the Hollywood film industry — had already eased some eligibility rules in April, allowing movies that skip the big screen and appear on streaming platforms to contend for Oscars this year.

The Oscars are the grand finale of a movie award season starting in earnest with the Golden Globes in early January.

Immediately following the Academy’s announcement, Britain’s BAFTAs — which typically take place shortly before the Oscars — were postponed until April 11.

The change “acknowledges the impact of the global pandemic and accommodates an extended eligibility period,” BAFTA said in a statement.

Academy events including the Governors Awards — where honorary Oscars are presented to industry veterans — and a ceremony for scientific and technical achievements were postponed as well.