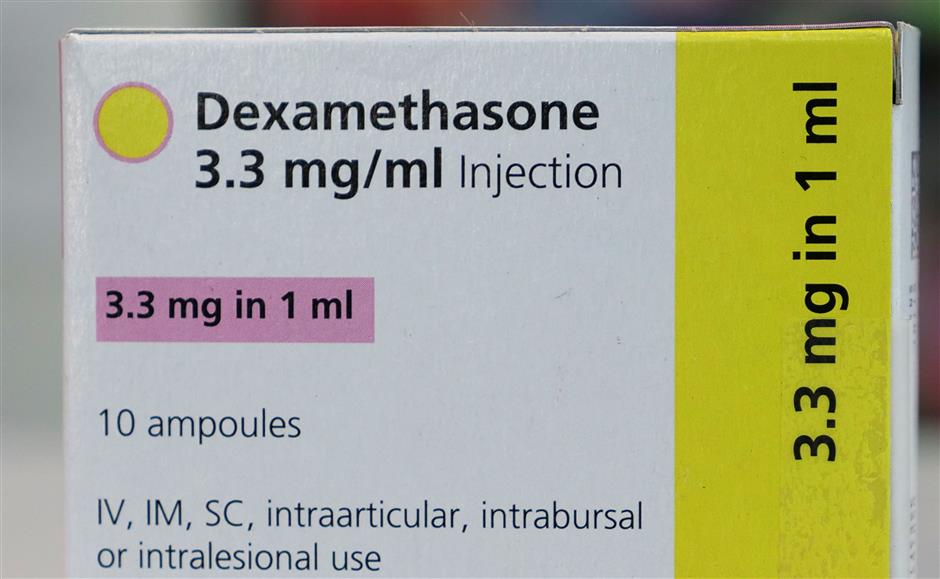 A box of dexamethasone injection ampoules is photographed at a chemists shop in London on Tuesday. The steroid dexamethasone was shown to be the first drug to significantly reduce the risk of death among severe COVID-19 cases, in trial results hailed as a "major breakthrough" in the fight against the disease.

The World Health Organization said it was moving to update its guidelines on treating people stricken with COVID-19 to reflect results of a clinical trial that showed a low-cost, common steroid drug can help save critically ill patients.

Trial results announced on Tuesday by researchers in Britain showed dexamethasone, used since the 1960s to reduce inflammation in diseases such as arthritis, can effectively reduce death rates among the most severely ill COVID-19 patients admitted to hospital.

However, the benefit was only seen in patients seriously ill with COVID-19 and was not observed in patients with milder disease.

The preliminary results, which have not been peer-reviewed yet, suggest the drug should immediately become standard care in patients with severe cases of the disease, according to researchers who led the trials.

“This is the first treatment shown to reduce mortality in patients with COVID-19 requiring oxygen or ventilator support,” WHO Director-General Tedros Adhanom Ghebreyesus said in a statement late on Tuesday.

The agency said it was looking forward to the full data analysis of the study in coming days.

“WHO will coordinate a meta-analysis to increase our overall understanding of this intervention. WHO clinical guidance will be updated to reflect how and when the drug should be used in COVID-19,” the agency added.

“This is a (trial) result showing if patients who have COVID-19 and are on ventilators or oxygen receive dexamethasone, it will save lives and will do so at a remarkably low cost,” said Martin Landray, an Oxford University professor co-leading the clinical trial.

They said they would work to publish the full details of the trial as soon as possible, and many scientists said they hope to be able to review the evidence for themselves soon.

The WHO’s clinical guidance for treating patients infected with the disease is aimed at doctors and other medical professionals and intends to use the latest data to inform clinicians on how best to tackle all phases of the disease — from screening all the way through to discharge.

But South Korea’s top health official cautioned about the use of the drug for COVID-19 patients.

“It has already long been used in South Korean hospitals to treat patients with different inflammation,” said Jeong Eun-kyeong, head of South Korea’s Centers for Disease Control and Prevention.

“Some experts have warned of the drug not only reducing the inflammatory response in patients, but also the immune system and may trigger side-effects. We are discussing the use of it for COVID-19 patients.”