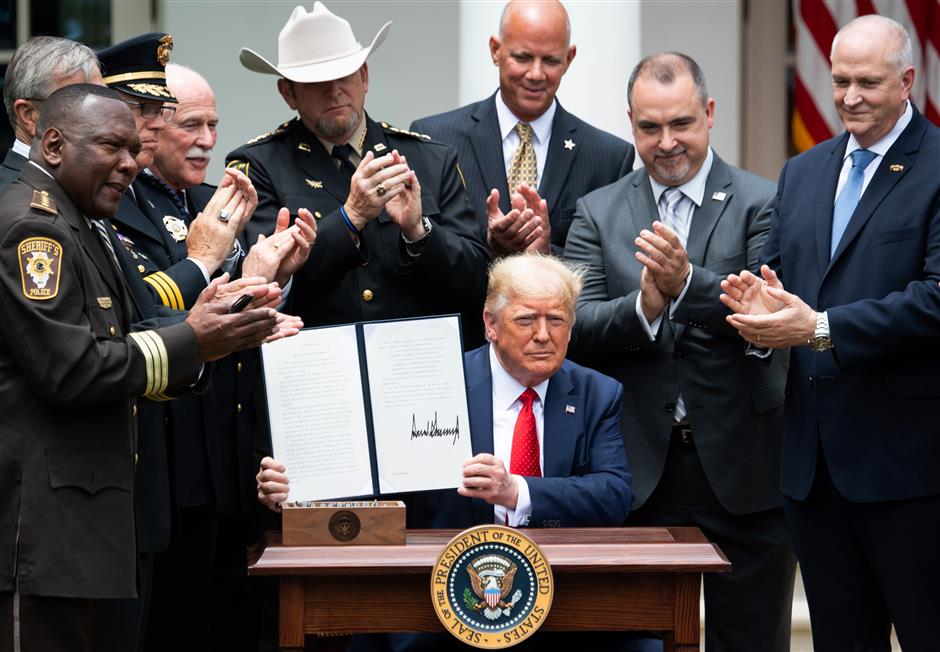 US President Donald Trump shows his signature on an Executive Order on Safe Policing for Safe Communities, in the Rose Garden of the White House in Washington, DC, Tuesday.

Following weeks of national protests since the death of George Floyd, US President Donald Trump signed an executive order on policing on Tuesday that would encourage better police practices and establish a database to keep track of officers with a history of excessive use-of-force complaints.

In Rose Garden remarks, Trump stressed the need for higher standards and commiserated with mourning families, even as he hailed the vast majority of officers as selfless public servants and held his law-and-order line, while criticizing Democrats.

“Reducing crime and raising standards are not opposite goals,” he said before signing the order flanked by police.

Trump and the GOP have been rushing to respond to the mass demonstrations against police brutality and racial prejudice that have raged for weeks across the country in response to the deaths of Floyd and other black Americans. It's a sudden shift for the Republican Party — and one Democrats are watching warily — that shows how quickly the protests have changed the political conversation and pressured Washington to act.

But Trump, throughout the crisis, has continued to emphasize his support for law enforcement and even on Tuesday railed against those who committed violence during the largely peaceful protests.

Trump’s executive order would establish a database that tracks police officers with excessive use of force complaints in their records. And it would give police departments a financial incentive to adopt best practices and encourage co-responder programs, in which social workers join police when they respond to nonviolent calls involving mental health, addiction and homeless issues.

Trump said that, under a new credentialing process, chokeholds will be banned “except if an officer’s life is at risk.” Chokeholds are already largely banned in police departments nationwide.

Trump framed his plan as an alternative to the “defund the police” movement that has emerged from the protests and which he slammed as “radical and dangerous."

“Americans know the truth: Without police there is chaos. Without law there is anarchy and without safety there is catastrophe,” he said.

Trump's audience included police officials and members of Congress, and came after he met at the White House with the families of men and women who have been killed in interactions with police.

“To all of the hurting families, I want you to know that all Americans mourn by your side,” Trump said. “Your loved ones will not have died in vain.”

Yet Trump made no mention of systemic racism in his comments.